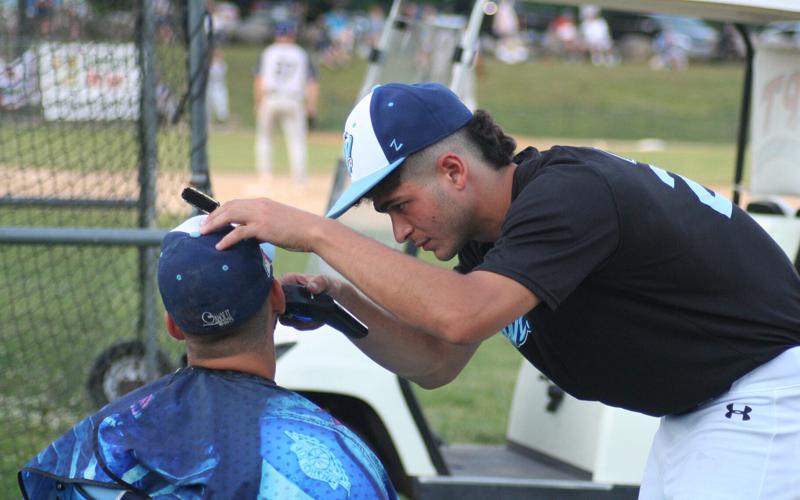 Joe Cinnella trims the beard of a teammate. | Photo courtesy Will Geoghegan 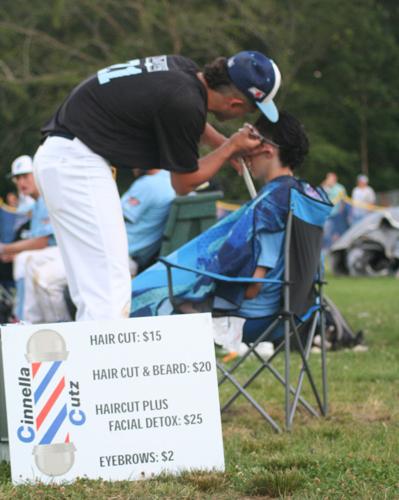 Joe Cinnella trims the beard of a teammate. | Photo courtesy Will Geoghegan

Joe Cinnella has a deal for you.

The Ocean State Waves pitcher moonlights as a barber, and he has brought his skills — and his clippers — to Old Mountain Field this summer. What started as a chance to hone his craft on the coiffures of teammates has morphed into a side business. When he’s not pitching, Cinnella is giving haircuts to fans in the bullpen while they watch the game.

“They love it. They’ve been all for it,” Cinnella said. “I think my teammates like it too, because it’s more interaction with the kids. It’s just fun.”

Cinnella is heading into one final season at Seton Hall University. The New Jersey native has already graduated with a degree in marketing and will do graduate work next year for a certificate in business.

His time at Seton Hall sparked his new pursuit. He had never cut hair nor had any interest until he started watching a teammate, Ricky DeVito, cutting teammates’ hair. DeVito passed the torch to Cinnella the last few years. On road trips, his hotel room doubled as a barber shop. The Pirates always had fresh cuts.

"Freshman year, I was broke and it was a fun way to make a little money," Cinnella said. "I thought it was interesting, giving people cool haircuts. I was lucky enough to have 40-plus teammates at school who didn’t care what they looked like. I gave out free haircuts for a couple of months and then started charging a little bit. It’s a fun, relaxing thing to pass time.”

As his interest grew, Cinnella set up an Instagram account on which he posts some of his work, and he began cutting hair occasionally at a barber shop near Seton Hall’s campus. He packed his gear for his summer in Rhode Island, planning to keep the Waves looking good.

“One of my teammates, Nick Payero, said I should cut hair in the bullpen — not for the kids, but for my teammates. When we do [batting practice], guys are just laying around. I figured I could give haircuts and make some extra money,” Cinnella said.

Then the idea of expanding his clientele popped up. Cinnella is staying with the Wentworth family this summer. Chuck and Lori Wentworth’s son, Jack, played baseball at South Kingstown and is now a teammate of Cinnella’s at Seton Hall. Lori had a few parents ask about the haircuts.

“A couple of people reached out to her asking if their kids could get haircuts, and she said I should do it at the games,” Cinnella said. “I started giving out haircuts and kids started coming.”

The bullpen barber fits the laid-back vibes of Waves games at Old Mountain Field, where beach chairs outnumber spots in the stands. Affordable family fun has long been the mantra for the organization — now it’s family, affordable fun and affordable haircuts. A sign detailing his offerings and prices stands at the edge of the bullpen, in front of a camp chair that serves as the barber’s chair. Cinnella offers haircuts, beard trims and eyebrow trims.

The Waves’ youngest fans seem especially excited about the opportunity, with a steady stream of kids arriving at the bullpen each night.

“Some of them let me do crazy things, let me re-do their whole look,” Cinnella said.

Teammates are still taking advantage of the opportunity, as well.

“The guys have some crazy fades going, but it’s fun,” Waves manager Eric Hirschbein-Bodnar said. “Things like that keep a team together. And he gets to work on his craft.”

While shaggy fans might be disappointed to find Cinnella pitching on a given night and not cutting hair, the Waves have welcomed his presence on the mound, too. He was a late addition to the roster, and he’s been buzzing opposing hitters. As of Tuesday, he had a 1.62 ERA across five appearances, with 18 strikeouts.

“Just learning,” he said of his goals for the summer. “This year at school wasn’t the best year. Whatever I needed to focus on and work on, I’m going to do that here. Just get as many innings as I can and have fun.”

“He was a late add to the roster, but he’s a veteran guy with a lot of experience out of the bullpen and starting,” Hirschbein-Bodnar said. “He’s best friends with Nick Payero, and Nick called me about him. He said you’re going to get a competitor. He’s got a three-pitch mix. The most important thing is he cares and he works his butt off. He’s a great team guy.”

Cinnella has more innings in his future. Down the road, he’d like to keep cutting hair, too, maybe even making it a full-time gig.

“I might want to open up my own shop one day,” he said. “I think cutting hair is cool and the art of it is cool. I definitely want to stay in the business somehow.”

I'm pretty sure you need a license to cut hair in Rhode Island if you are accepting payment for it. You may have just gotten this chap into a whole lot of trouble.

Giant sharks once roamed the seas, feasting on huge meals

PHOTOS: Surfing under the bright moonlight at Fenway Beach