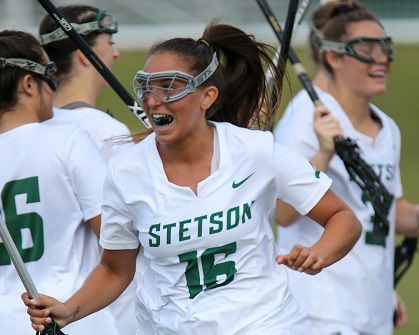 Kate Johnson had three goals and one assist in her freshman season at Division I Stetson University in Deland, Fla. She started two of the Hatters' five games before the pandemic canceled spring sports across the country. | Photo courtesy Stetson University 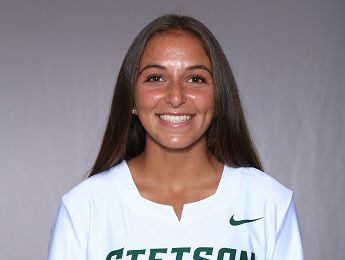 Kate Johnson had three goals and one assist in her freshman season at Division I Stetson University in Deland, Fla. She started two of the Hatters' five games before the pandemic canceled spring sports across the country. | Photo courtesy Stetson University

Johnson, the former Stonington High standout, enjoyed her first win as a collegian in the Hatters' season opener, and she later scored her first career goal. "It was awesome," she said.

But she also endured the frustration of a season cut short by the COVID-19 pandemic and saw the pain the team's seniors experienced upon learning the news they had played their last game — just five games into the 2020 campaign.

"It was a bummer," Johnson said. "I think we had a really good start for the program, and our team was connecting right off the bat. During the fall, we worked really hard. We all went into the season pretty confident."

Stetson, whose total enrollment is about 4,400, is located in Deland, Fla., about 25 miles west of Daytona Beach.

The Hatters, who play in the Division I Atlantic Sun Conference (other league teams include Jacksonville, Liberty, Howard and Kennesaw State), are relatively new to women's lacrosse. The program started in 2013 and hasn't had much success — the team has yet to win more than five games in any season.

But, as Johnson mentioned, they were optimistic about this season's prospects, and that optimism was bolstered by an 18-15 victory at home over Oregon in the opener, which Johnson said highlighted her spring.

"When the final buzzer went off, we all ran on to the field. That was a big moment," she said. "Probably what was most memorable was that we responded to every goal they scored. The competition and the competitiveness in the game was unlike any other we had that season."

Johnson scored her first career point early in the first half, assisting on a Marina Rotella goal that gave the Hatters a 2-1 lead.

At Stonington, scoring points and winning games came in bunches for Johnson. She set a program record for points with 128 (84 goals, 44 assists) as a senior, and the Bears went 18-4 and reached the 2019 Class S title game. After the season, she was named first-team All-State. (She was also an ECC Division II All-Star in basketball.)

But when she started practicing with the Hatters, she realized she wasn't in Stonington anymore.

During fall lacrosse, she felt like she was "two steps behind at first," such was the increased pace of play compared to high school.

"The speed of play and the teams we were facing were all fast and strong — that was the biggest adjustment," she said. "Playing with people that were faster and stronger was an adjustment as well. The ball movement across the field is also different. Transition itself is different. The ball would move longer distances in college than in high school."

Johnson and the Hatters were still finding their footing after the Oregon victory, and were unable to build any momentum off it — they lost their next four games, all on the road.

During the losing streak, Johnson scored her first collegiate goal. It came early in an 18-6 defeat to conference rival Jacksonville.

"I received a pass from Riley Reagan, a junior on our roster, as I was cutting to the goal," she said. "I was able to get an open shot and found the back of the net. It was exciting. The adrenaline was definitely there."

Two games later, on March 8, the Hatters lost to Central Michigan, 14-11, to fall to 1-4. But, Johnson noted, there was still plenty of reason for optimism. The bulk of the season remained and they had a six-game homestand coming up to work out the chemistry kinks.

"Our only win came at home," she said, "and we were really looking forward to being back on our home turf. But, unfortunately, it didn't happen."

At a team meeting, coach Christy Leach broke the news: The season was canceled due to the coronavirus pandemic.

"It was very emotional. We were all very heartbroken," Johnson said. "Everyone on our coaching staff thought this year was gonna be a turning point, and coming out and beating Oregon was a step in the right direction. The cancellation just made it sting more.

"It was a setback for myself and the team in general. And I feel for the seniors, who were great leaders. That was our hardest moment, learning that the season was canceled. I don't think the seniors could believe it, going out the way they did."

Johnson, who played mostly as a midfielder, started two of the five games and finished with three goals and one assist.

She also did well in the classroom, posting a 3.5 GPA as a health science major.

Home since mid-March, Johnson has been working with personal trainer Todd Gwaltney — along with high school classmate Miranda Arruda, who plays softball at Seton Hall — and goes up to the old stomping grounds, Palmer Field at SHS, to fine-tune her game in advance of next season.

"I'm personally hoping to find my role on the field at little bit better, and now that I'm a sophomore and not a freshman, to step into a role as a leader a little and overall doing what my teammates need me to do, which is important," she said. "I'm hoping to hone my skills and just come back next season prepared."

PHOTO: Legend of the fall — leaf-blowing has begun

In the Westerly Schools: Test and Stay, vax clinics on the horizon