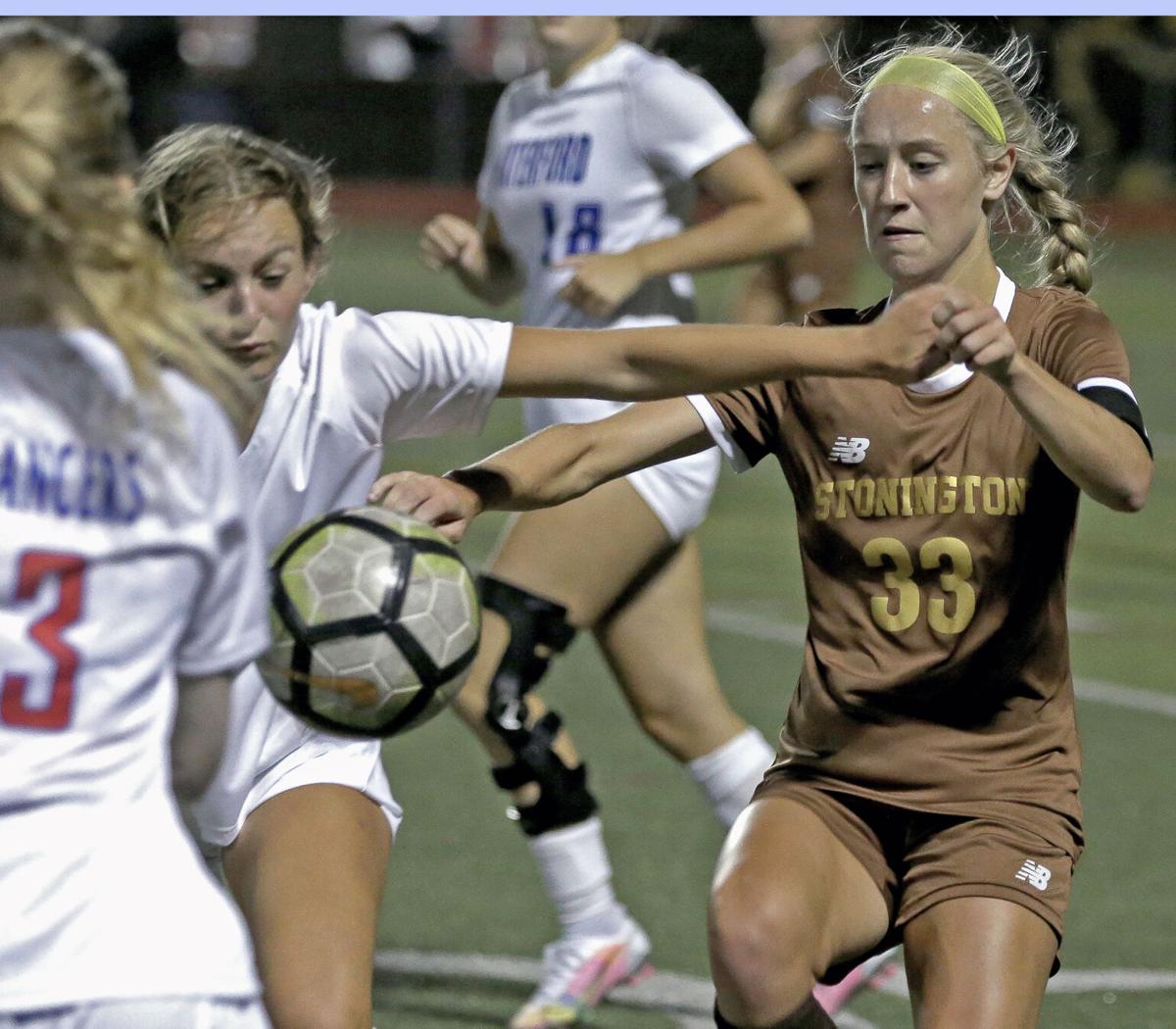 Stonington’s Corinne Steeno attempts to get through Waterford defenders during the second half at Stonington High on Monday. | Tim Martin, The Westerly Sun 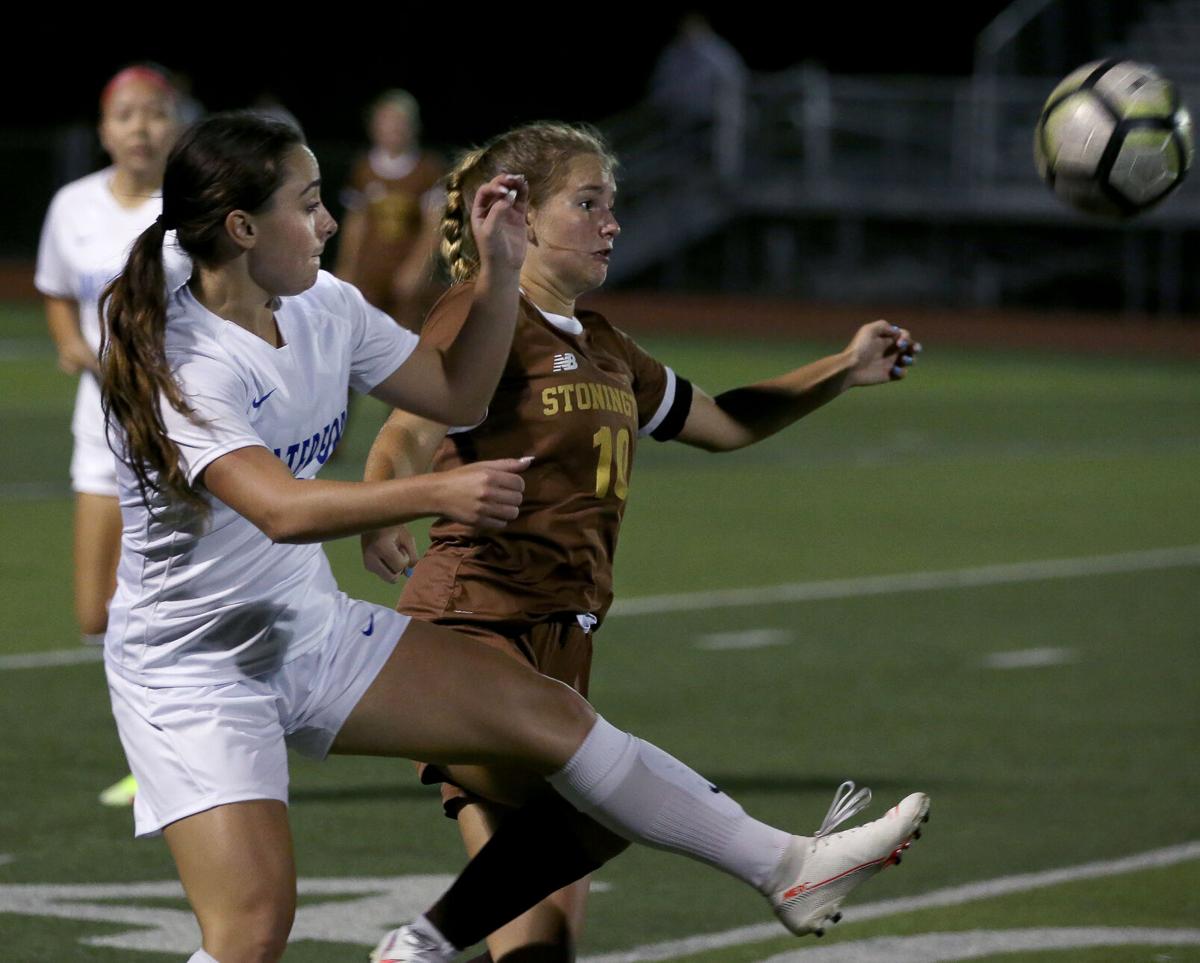 Stonington’s Ivy Goodman and Waterford's Emily Gates battle for a ball during the second half Monday at Stonington High. | Tim Martin, The Westerly Sun 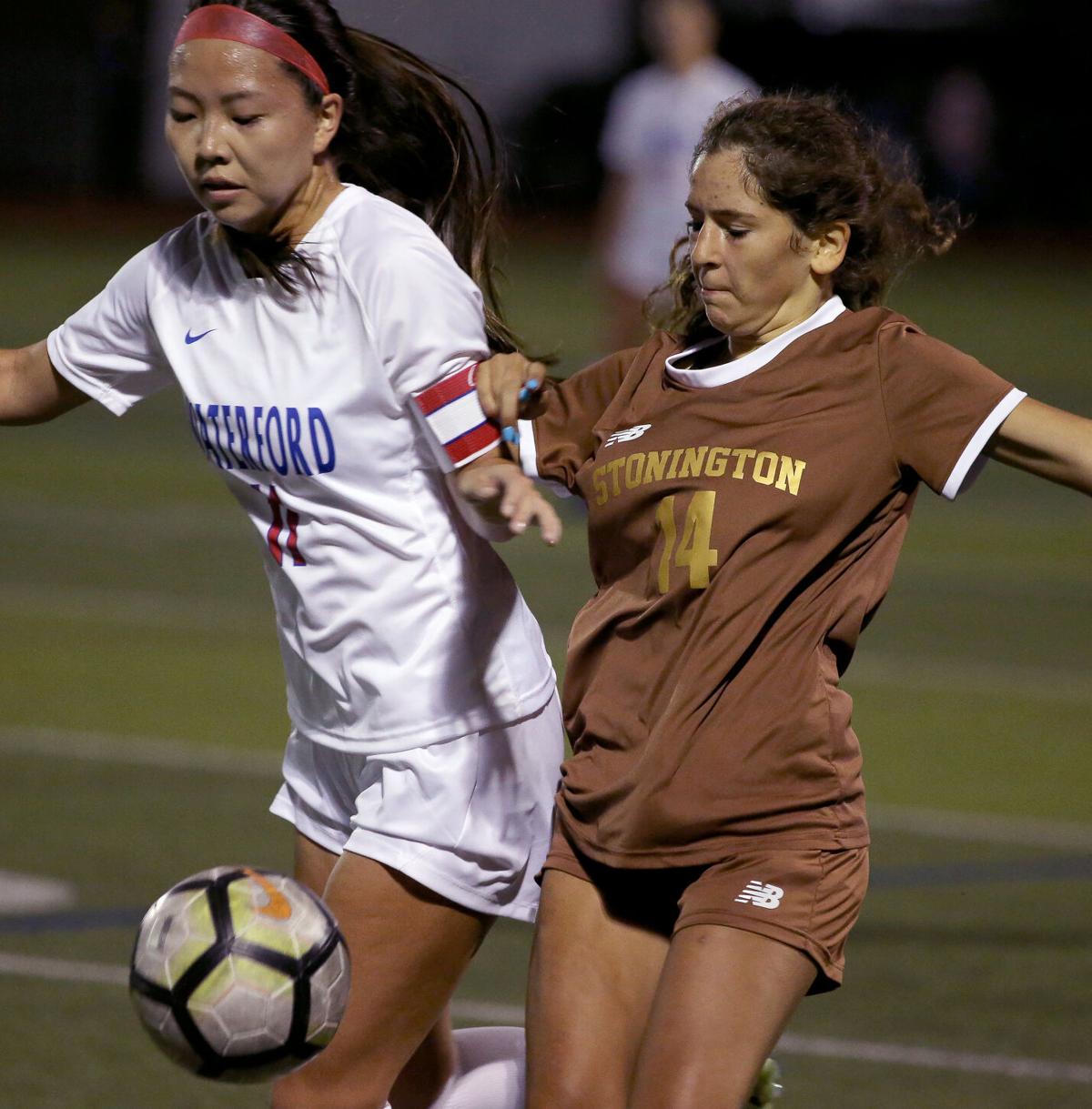 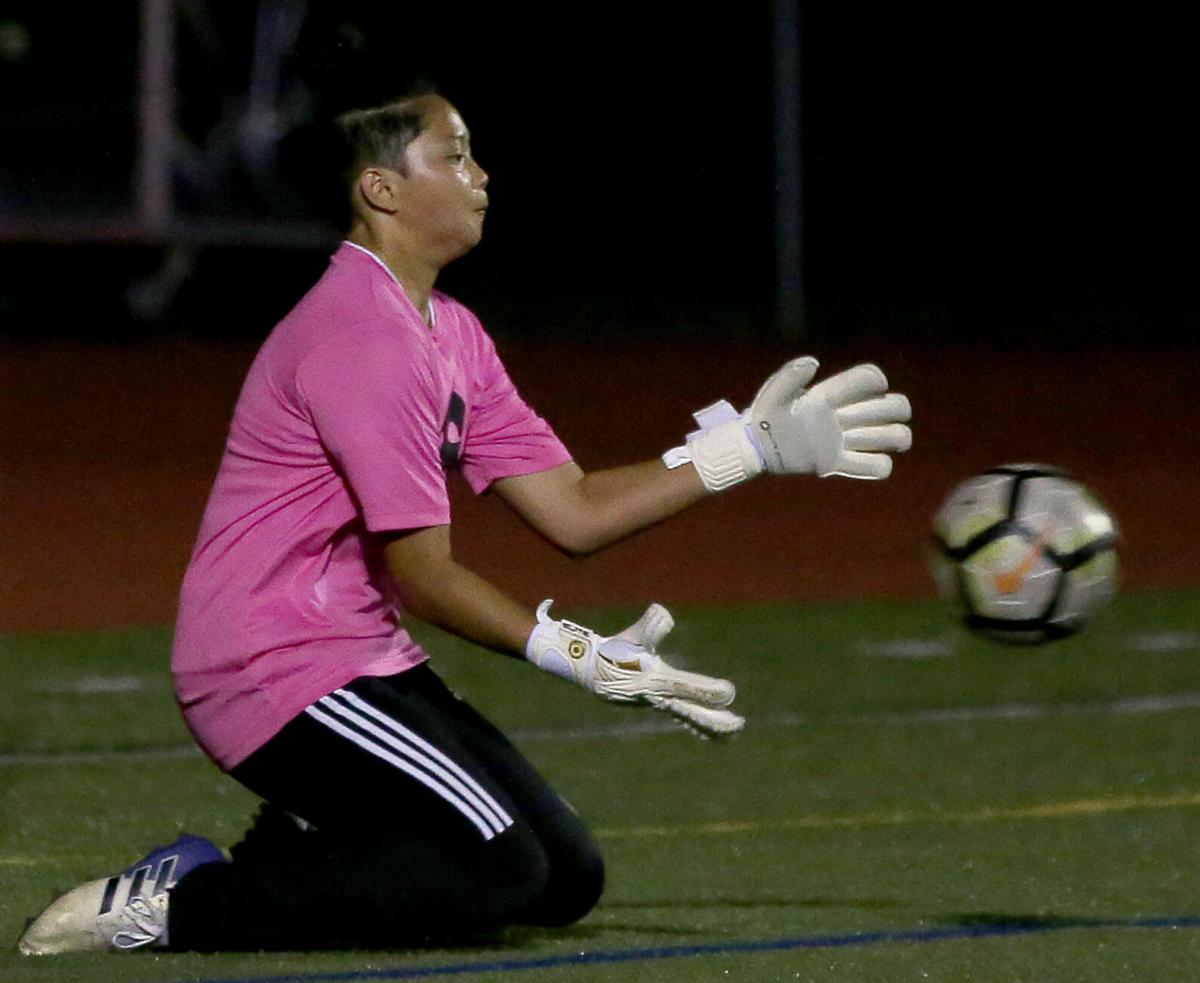 Stonington goalie Vanessa Amkhamavong, makes a first- half save against Waterford at Stonington High on Monday. | Tim Martin, The Westerly Sun |. 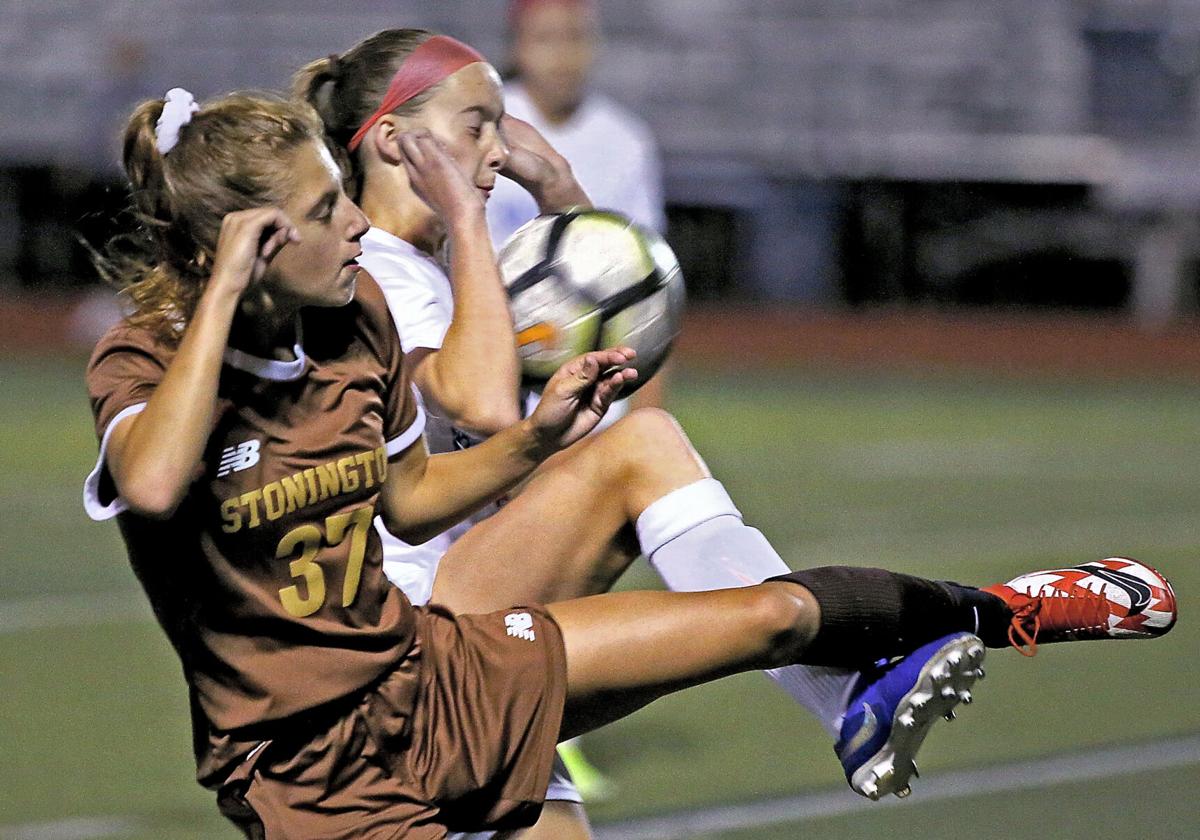 Stonington’s Maya Terwilliger attempts to gain control of the ball against Waterford’s Camryn Dickenson during the second half. | Tim Martin, The Westerly Sun |. 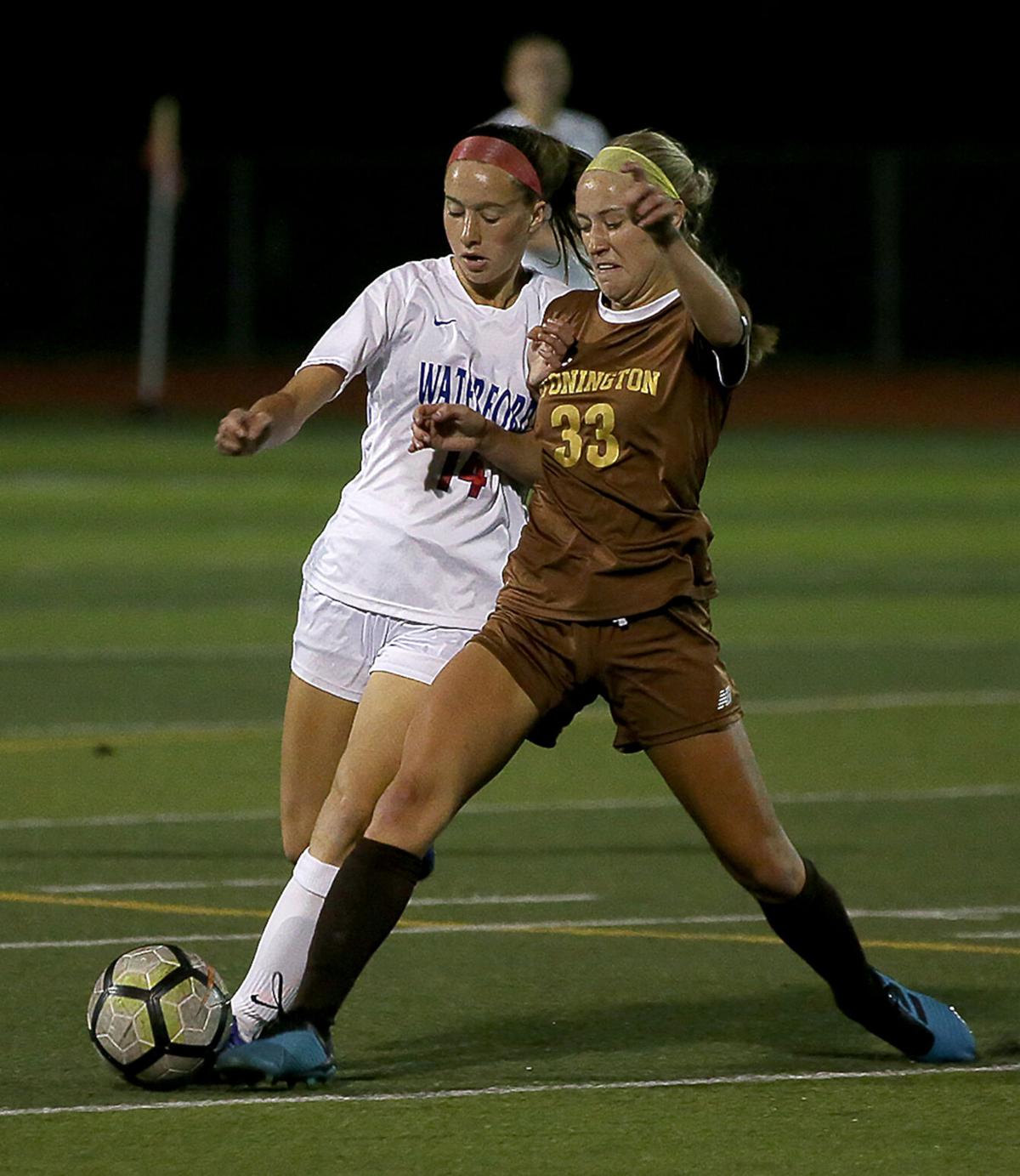 Stonington’s Corinne Steeno attempts to get through Waterford defenders during the second half at Stonington High on Monday. | Tim Martin, The Westerly Sun

Stonington’s Ivy Goodman and Waterford's Emily Gates battle for a ball during the second half Monday at Stonington High. | Tim Martin, The Westerly Sun

Stonington goalie Vanessa Amkhamavong, makes a first- half save against Waterford at Stonington High on Monday. | Tim Martin, The Westerly Sun |.

Stonington’s Maya Terwilliger attempts to gain control of the ball against Waterford’s Camryn Dickenson during the second half. | Tim Martin, The Westerly Sun |.

STONINGTON — Stonington High girls soccer coach Jennifer Solmon is hopeful Monday night's 1-0 ECC Division II loss to unbeaten Waterford will pay more dividends down the road than some of the lopsided victories the Bears have had this season.

"It is 100 percent a better game for us every day of the week," Solomon said when asked to compare the benefit of a 1-0 loss to some of the big wins. "I would prefer these games. I'm not about winning. I want to win, don't get me wrong, but I want to get better.

"From first half to second half we were much better. The more teams we play that are this good the better we will be at the end of the year."

The Bears a young squad this season. They started only two seniors on Tuesday — Ivy Goodman and Corrine Steeno. Three freshmen and a sophomore were in the starting lineup.

"Our young players are starting to see, 'Oh, this is how this is played,'" Solomon said. "It's helping a lot of my players — who have never played varsity — start to understand what it's all about. We have a good group and they will be ready to play these opponents the second half of the season."

Bryn Dickson carried the ball down the right sideline past midfield, but she was closely defended by two Stonington players. She skillfully eluded them as she retreated a bit. She then played the ball back to Emma DeVito, who had made a run from the back. DeVito drove the ball across the field about 35 yards away on a diagonal to the far left post. Waterford senior captain Nicole Li headed headed it in from about 7 yards away for a picture-perfect goal.

"It was a beautiful cross and the first headed goal of her career. It was a good time to get it," Waterford coach Chris Ghiglia said. "It was a hard-fought game. Both teams had chances. It's always a well-fought game when we play. It's always 1-0, one way or the other."

Earlier in the half, the Lancers had another opportunity to score, but a ball off the foot of Emily Gates hit the left post and bounced away.

Waterford had the better of the play in the first half, spending long stretches in Stonington's offensive third. Stonington backs Goodman, Helena Hoinsky, Annelise McGee and Sophia Regan did well to keep it 1-0 at the half.

Vanessa Amkhamavong was playing her second game in goal in place of Kelsea Anderson, who was injured against East Lyme on Sept. 22. Facing consistent pressure for the first time, Amkhamavong finished with seven saves on eight shots.

"I thought Vanessa stepped right in and she did a great job. I think the back four started to feel a little better as the game progressed," Solomon said.

In the second half, Stonington had more opportunities on offense.

Freshman Maya Terwilliger had two free kicks that hit off the crossbar. The first came in the first four minutes of the second half and the second about two minutes later. Stonington also had touches at the 6-yard box in the second half during scrambles in front of the goal.

"We played a little more conservative in the first half," Solmon said. "I think in the second half we fine-tuned a couple of things."

Solomon said the back line was more organized and did not chase the ball as much. She said the attackers made different, narrower runs and midfielders Terwilliger, Steeno and Carleigh O'Keefe did a better job of connecting passes.

"We knew Costa was a handful and she was only dangerous one time," Ghiglia said. "I thought we did a good job on her. I think for the most part we controlled the midfield. That puts every team in the division with a loss except for us, and it's a good place to be in."

Waterford has outscored its six opponents 10-2 with four shutouts.