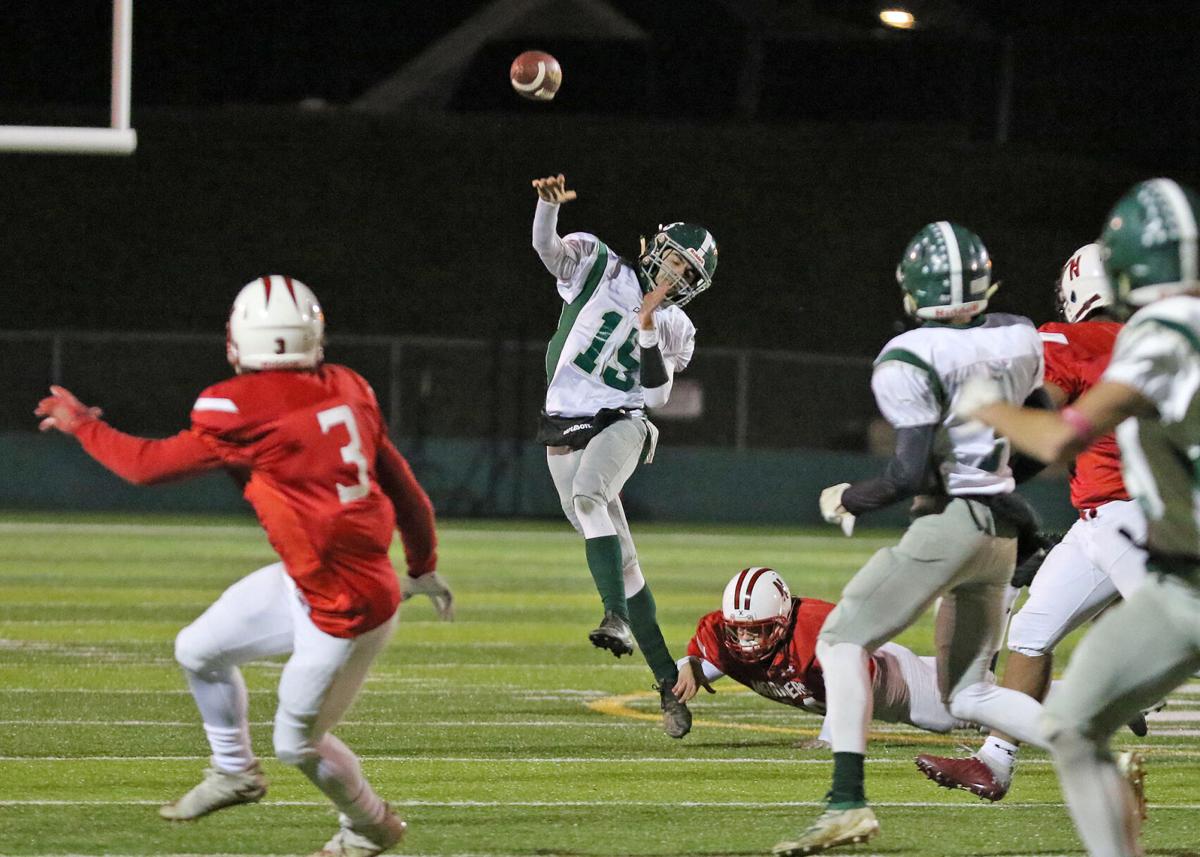 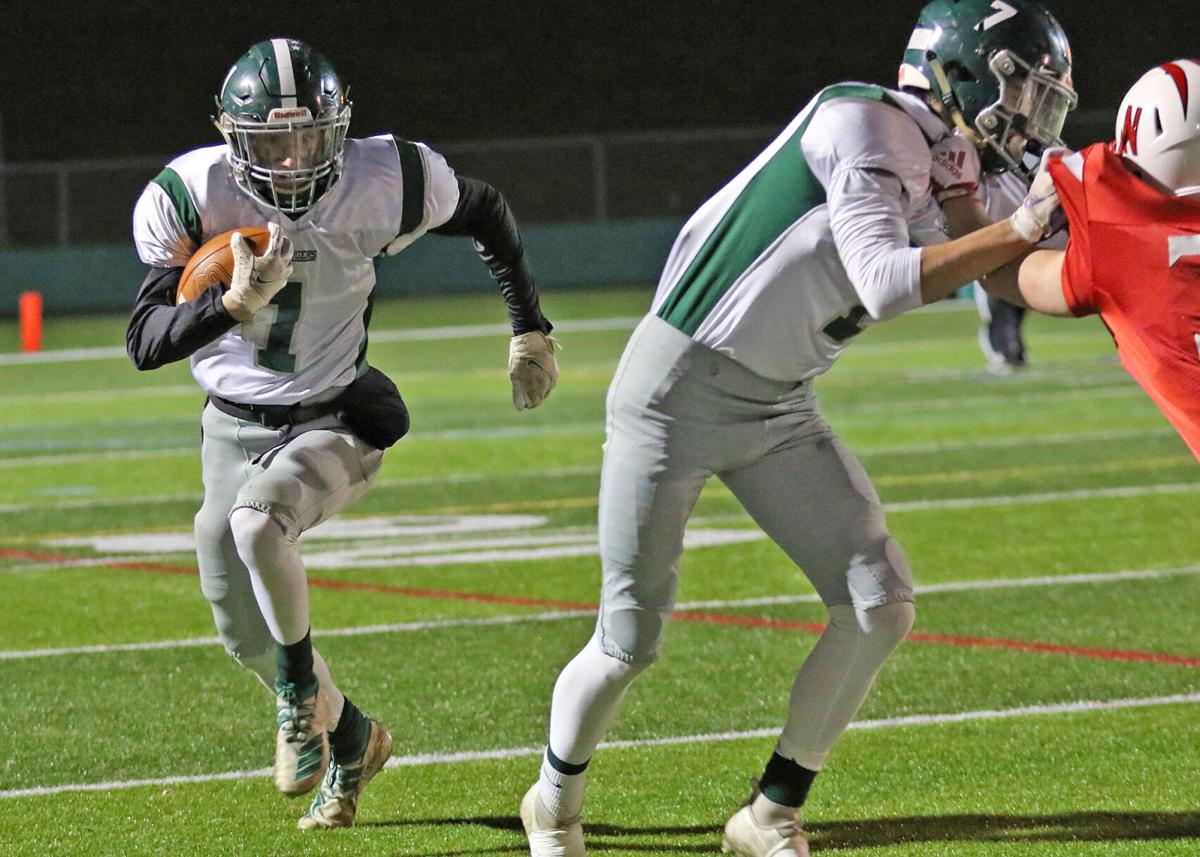 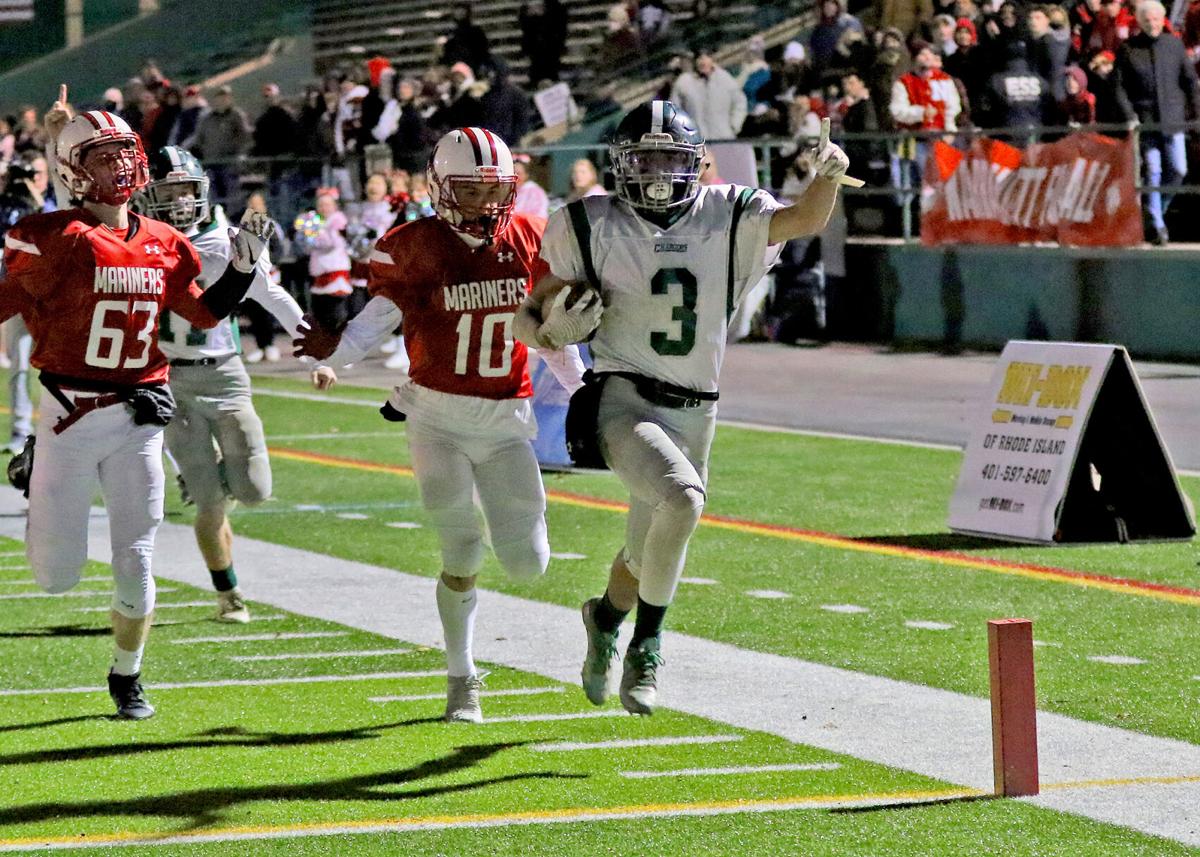 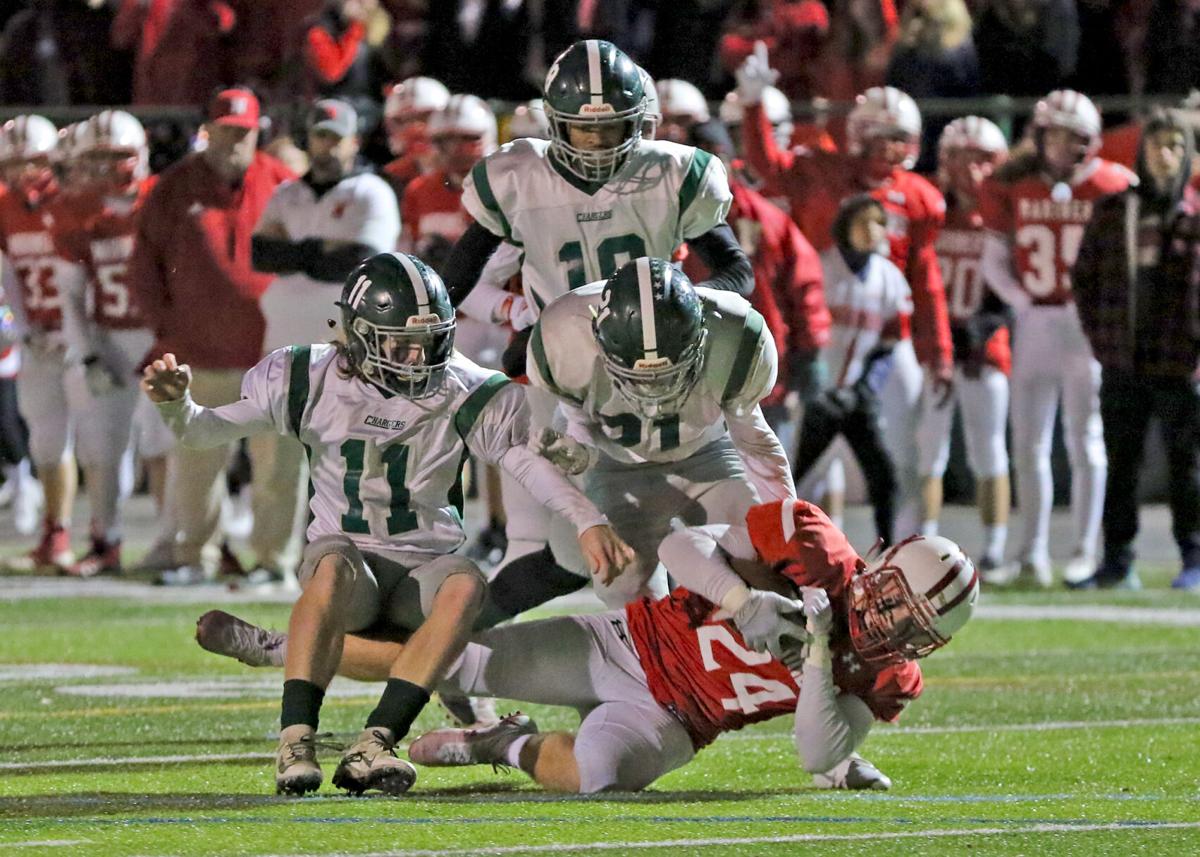 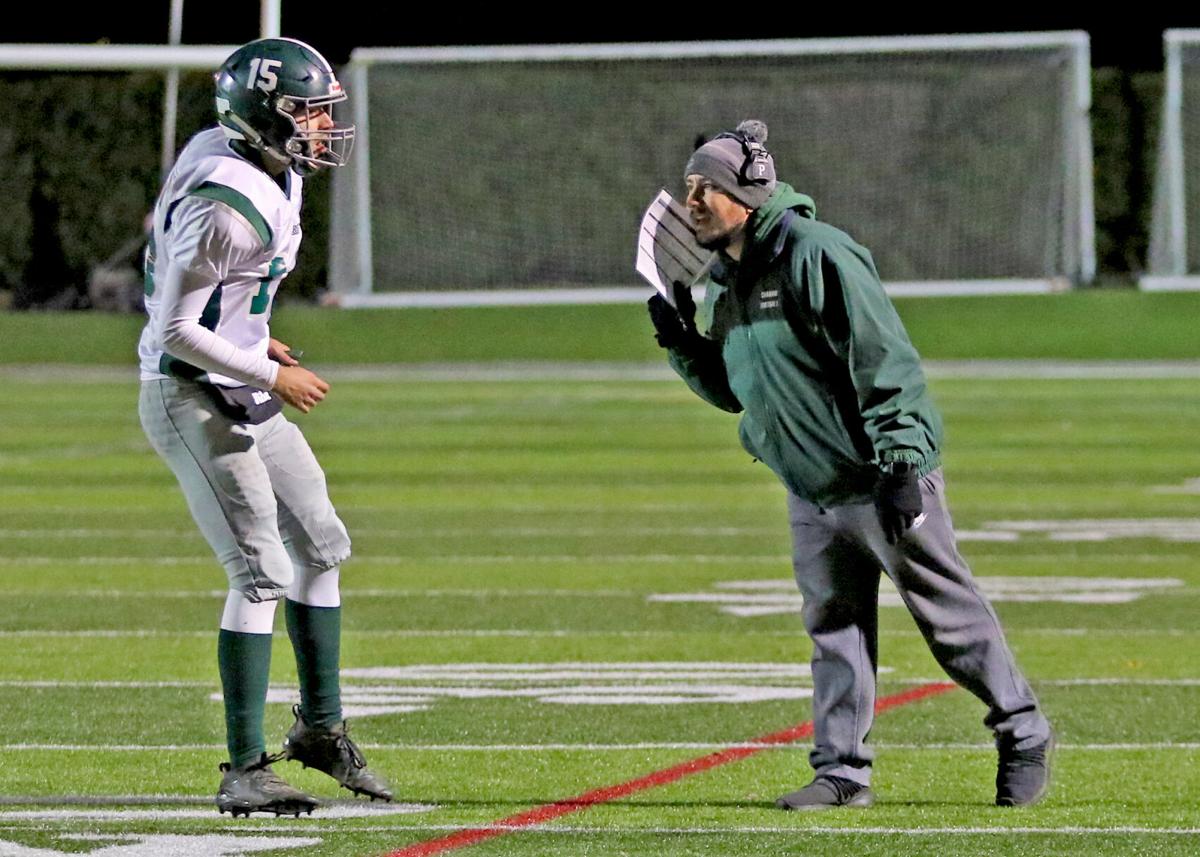 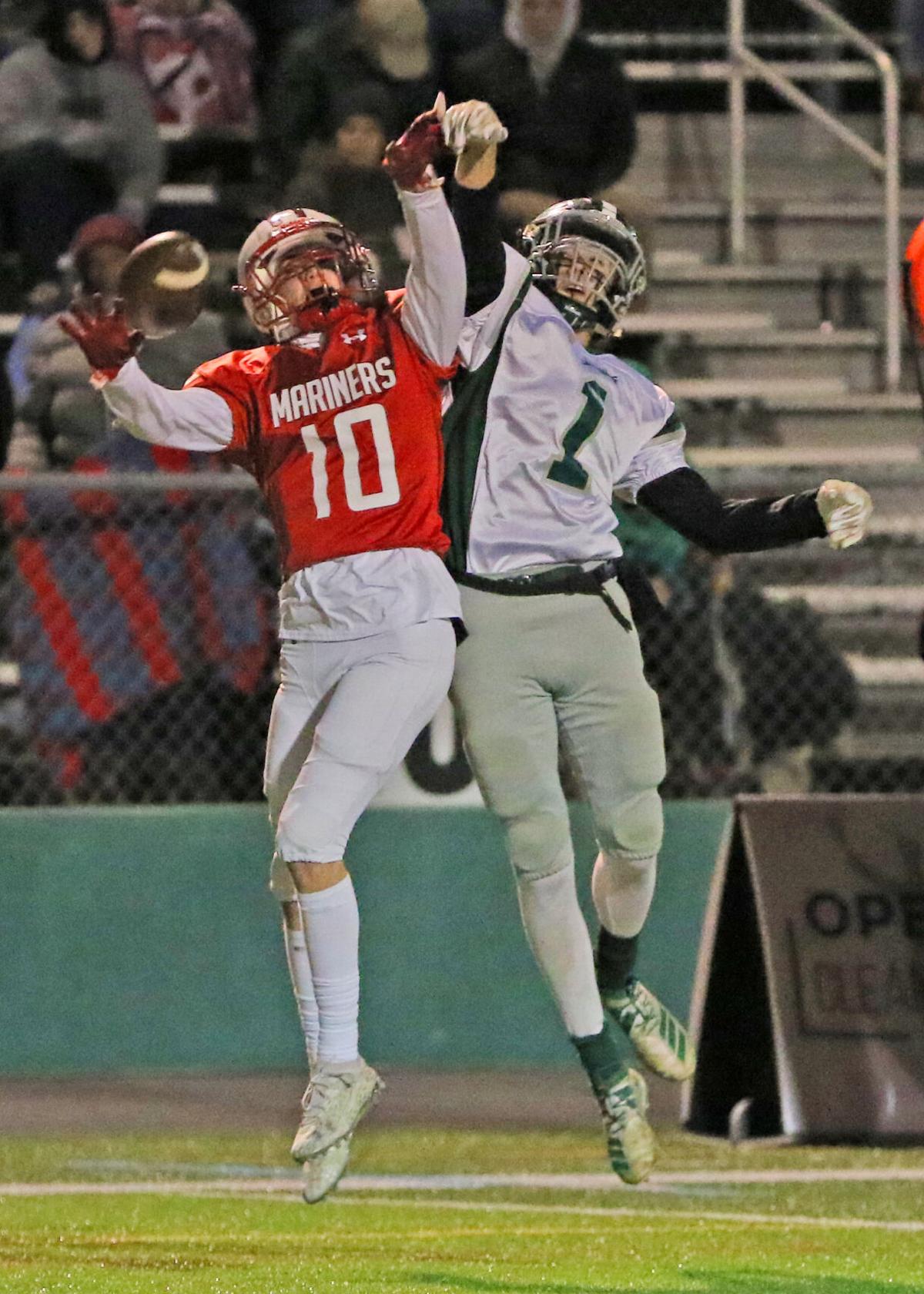 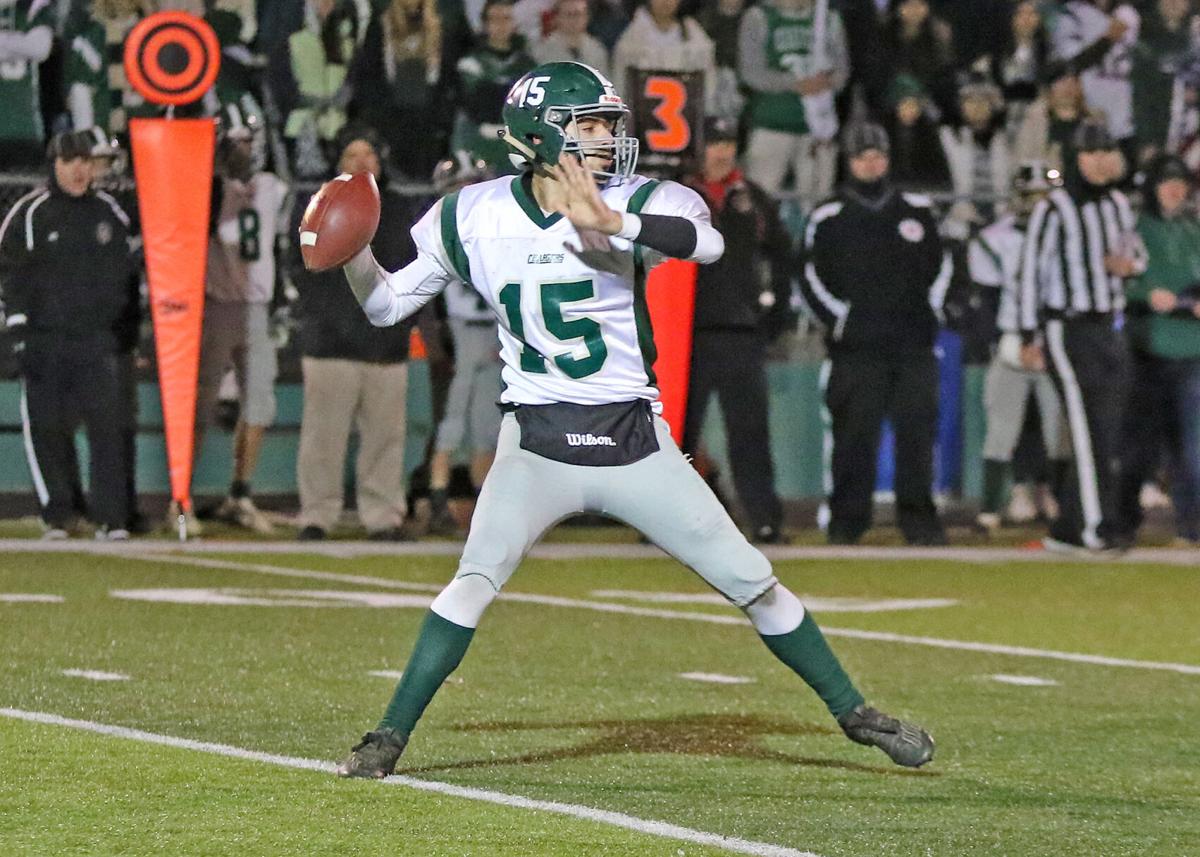 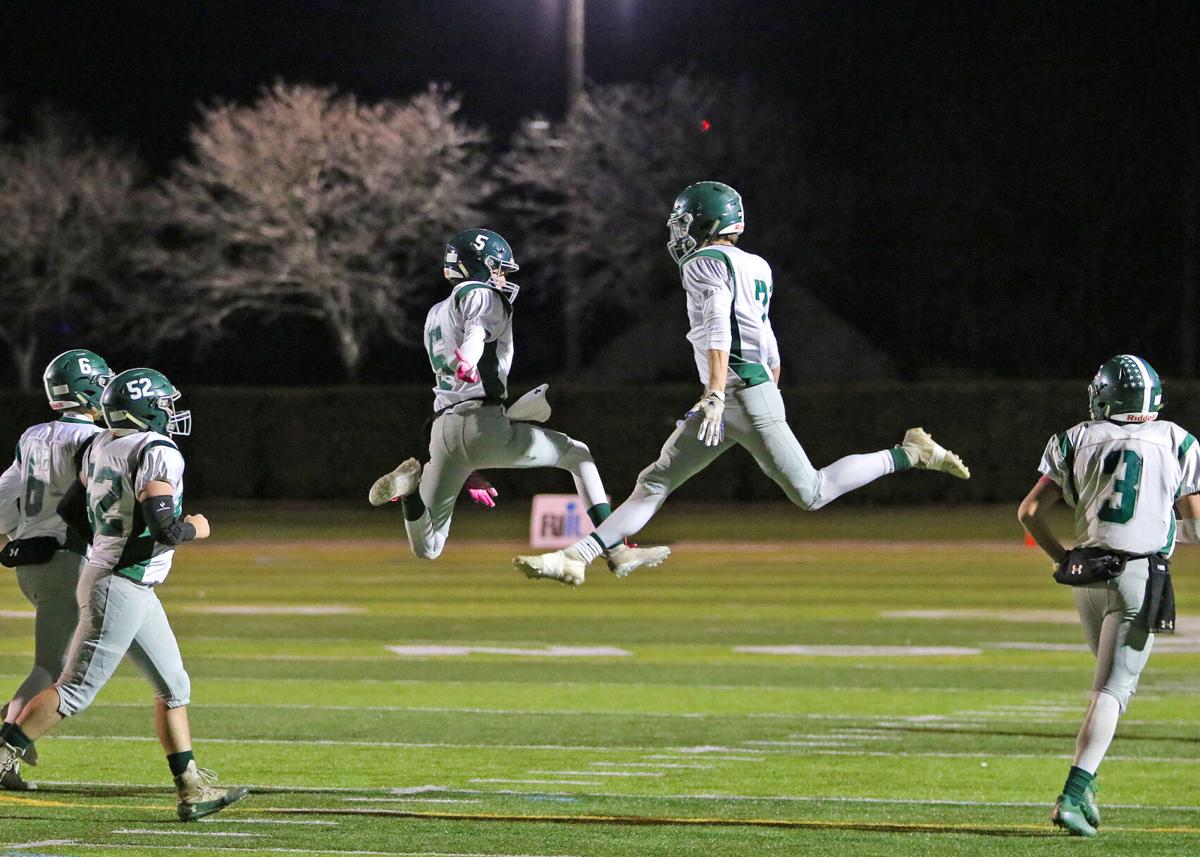 Chariho’s Jaxson Morkis (5) and Max Marshall (7) celebrate after a Chariho touchdown goes up on the scoreboard during the second half of the Chariho Chargers vs Narraganset Mariners EIIL Division-III Championship Title football game played Friday evening, November 19, 2021, at Cranston Stadium, Cranston, RI. | Jackie L. Turner, Special to The Sun 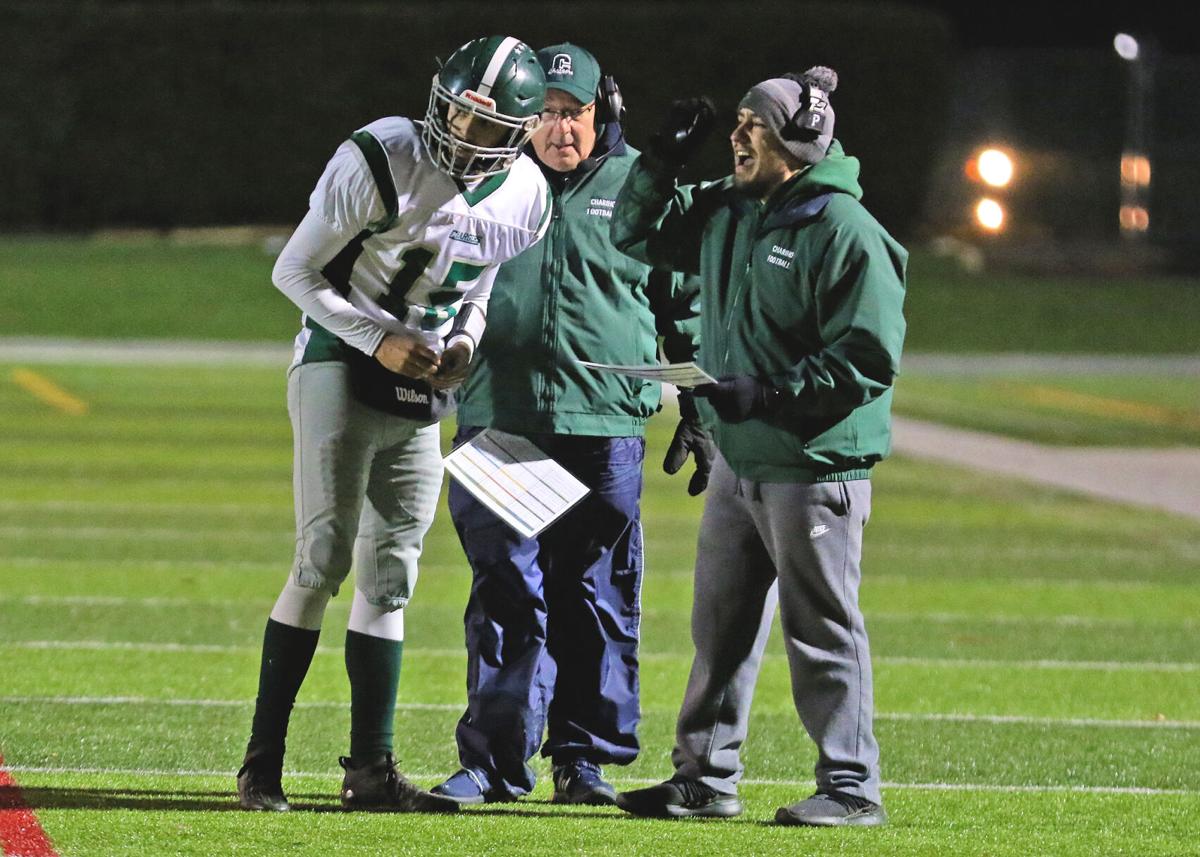 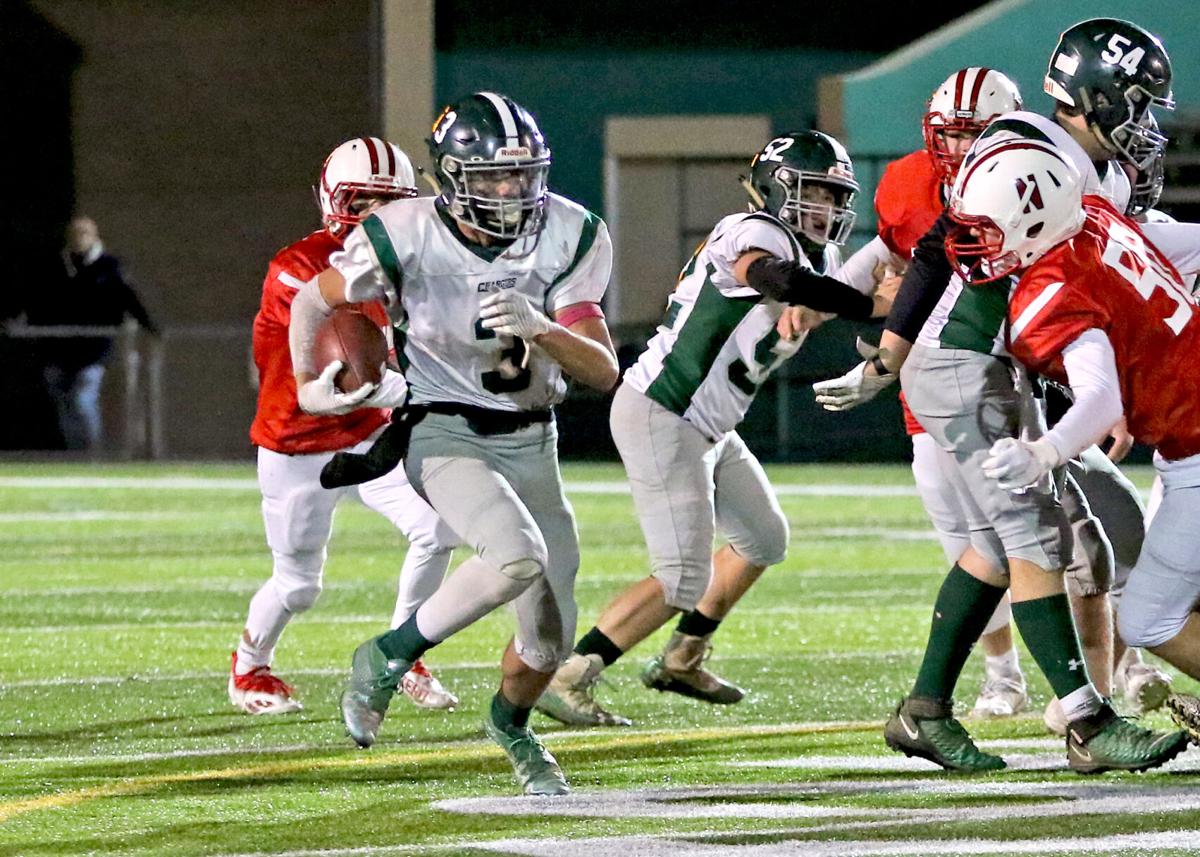 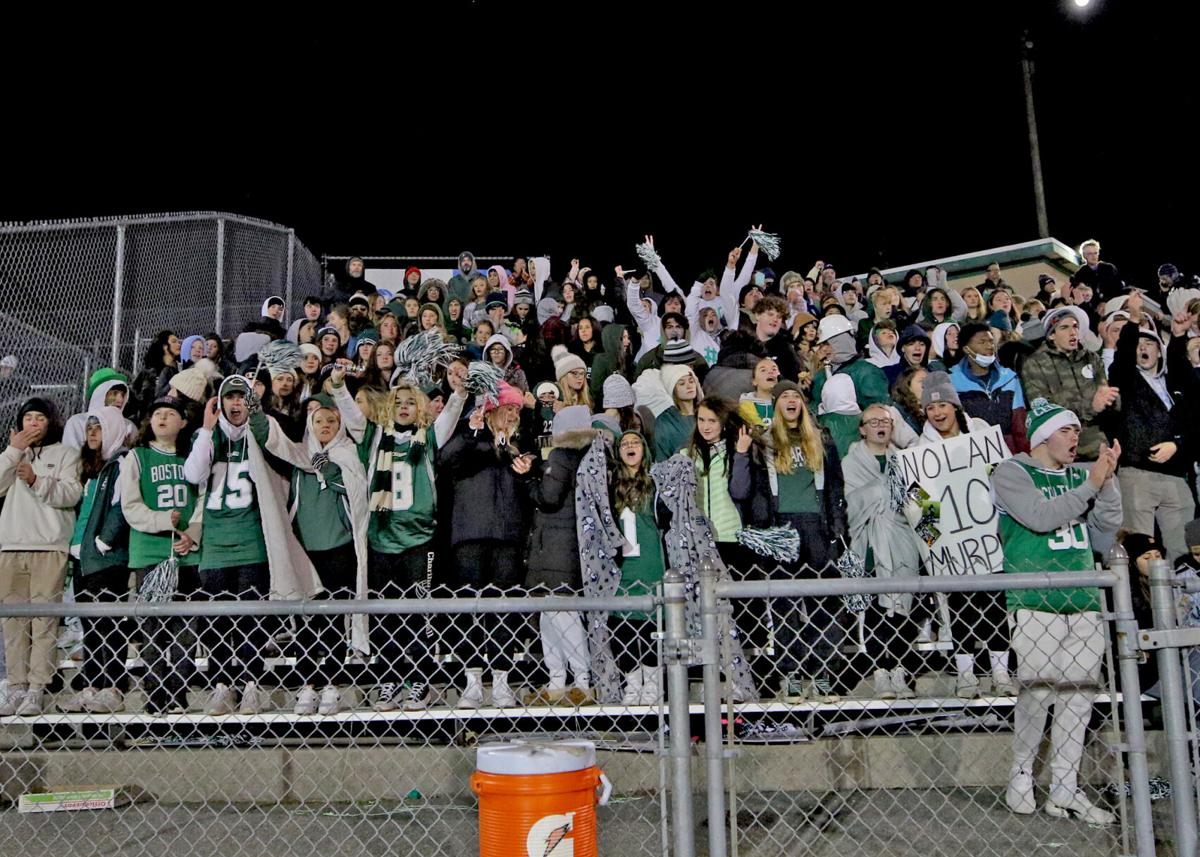 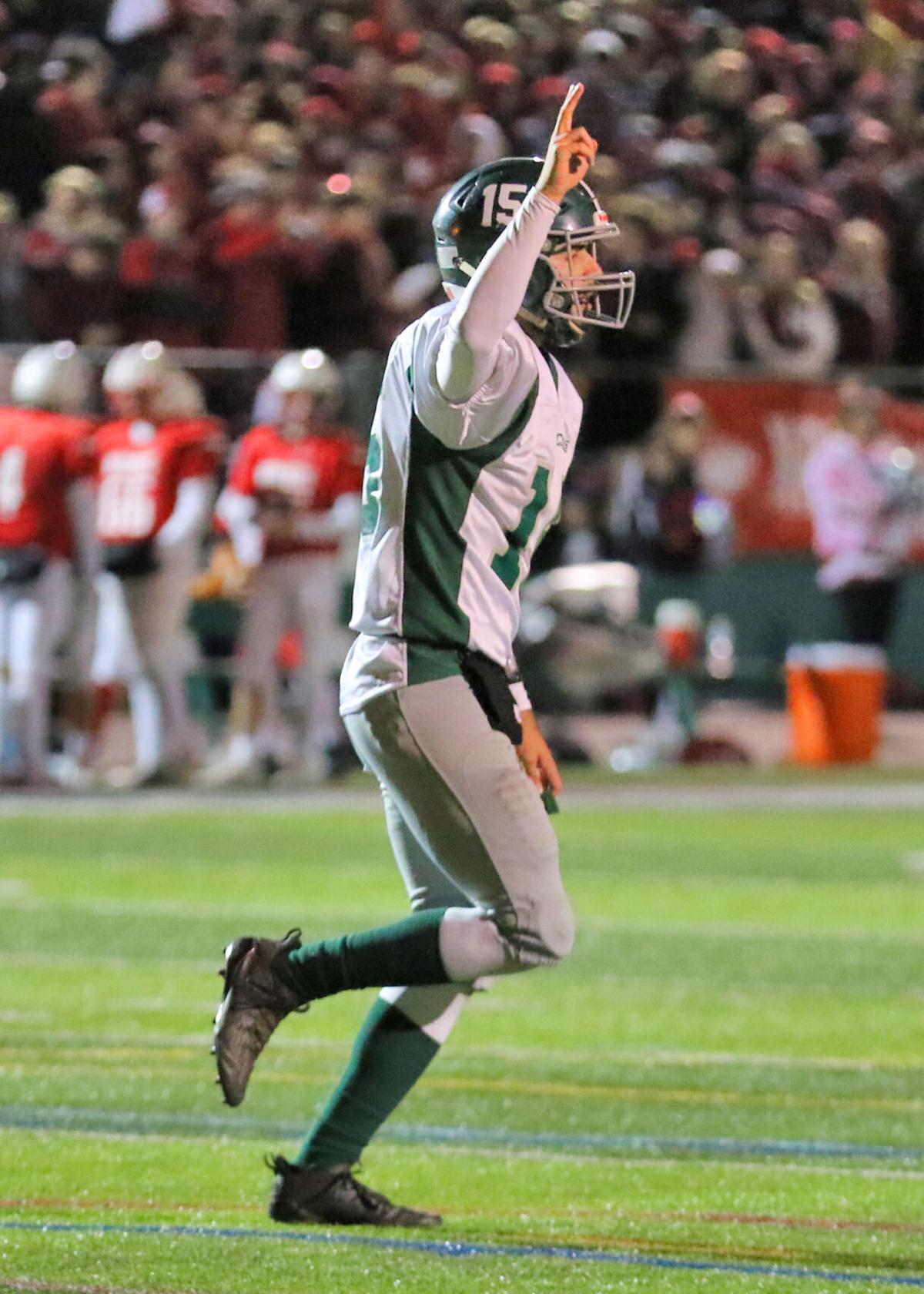 Chariho’s Jaxson Morkis (5) and Max Marshall (7) celebrate after a Chariho touchdown goes up on the scoreboard during the second half of the Chariho Chargers vs Narraganset Mariners EIIL Division-III Championship Title football game played Friday evening, November 19, 2021, at Cranston Stadium, Cranston, RI. | Jackie L. Turner, Special to The Sun

Turnovers, costly penalties and mistakes cannot be part of the formula against the Mariners.

Unfortunately for Chariho High on Friday night, the Chargers had too many miscues and could not produce drives when they needed to in a 51-33 loss to the Mariners in the Division III Super Bowl at Cranston Stadium.

"Against any team you can't have sacks, turn the ball over and have stupid penalties," Chariho coach Nick Russo said. "Narragansett had its fair share of mistakes, too, but we made them in more costly situations. It's just hard to come back from those things in any game, let alone a championship game."

Chariho fumbled the ball away three times and failed to cover a Narragansett onside kick in the loss.

The Mariners (10-1) scored the first five times they had the ball to build a 32-13 lead. Chariho's Collin Fitts had returned the game's opening kickoff 45 yards for a touchdown, and quarterback Zoot Boschwitz had scored on a 1-yard run for the Chargers in the second quarter.

Surprisingly, the Mariners ran a fake punt from their 34-yard line with about three minutes left in the half. But Chariho's Nekoda Thompson's stopped Tyler Poirier for an 8-yard loss on the play.

Five plays later, Boschwitz rolled to his right and threw a 4-yard scoring pass to Caleb Maggs. Boschwitz threw a conversion pass to Jaxson Morkis to make it 32-21 with 1:26 left in the half.

On the ensuing kickoff return, a hit from Chariho's Myles Price caused a fumbled that Lucas Corah recovered at the Mariners 36. On second down, Boschwitz scrambled 25 yards to the 2 and scored on the next play to make it 32-27 with 14.8 seconds left in the half.

The Chargers were back in it.

"We were excited at halftime," senior defensive back Nolan Murphy said. "We were loud in the locker room and coach gave us a great speech to get us ready to play the second half."

The momentum appeared to carry over to the third quarter when the Chargers, aided by a Mariners holding penalty, forced a punt on Narragansett's first possession.

Fitts ran 12 yards to the Narragansett 32 on the first play of the ensuing possession, and Chariho appeared to be in business. But two sacks lost 22 yards and the Chargers were forced to punt from their 11.

Narragansett scored on its next possession when quarterback Phillip Theroux hit Poirier on a crossing pattern for a touchdown to make it 39-27 with 5:18 left in the period.

Chariho's next possession produced a pair of first downs, but ended with three incompletions.

Murphy got the ball back for Chariho with an interception on Narragansett's next drive. The Chargers gained a first down as the fourth quarter began, but three plays later, a pass from Boschwitz that Konnor Perrin did well to get a hand on was ruled a lateral.

Narragansett's Anthony DeCicco alertly picked up the loose ball as several players watched and raced 45 yards for a touchdown to make it 45-27 with 9:59 left in the game.

Theroux, who threw six touchdown passes, found Zachary Bianco wide open down the middle for a 44-yard scoring play with 5:30 left in the contest to increase the Mariners' lead to 51-27.

Mitch Silva scored for Chariho on a 5-yard pass from Boschwitz with 1:58 left in the game to make it 51-33.

Narragansett, running a no-huddle offense for all 48 minutes, was a handful when it had the ball. The Mariners came in averaging better than 48 points per game against Division III opponents.

Poirier had three touchdown receptions, and Harry Lague had a pair.

"Their offense is so explosive," Murphy said. "They can score quick, and if they get you down, you can't keep up. That hurry-up has everyone tired. We couldn't get things going on offense, and the defense was tired because they were on the field the entire time."

Russo said the Mariners' many weapons make them difficult to defend.

"It's their diversity on offense," he said. "They have a very accurate quarterback, two very good outside receivers and two good running backs with an offensive line. When we tried to take one thing away throughout the course of the game they just went to another thing and that's what good teams do."

Chariho was making its first appearance in a Super Bowl since winning the Division II title in 2011.

"It's been a helluva of a run since coach Russo got here," said Boschwitz, a four-year starter. "It's been a lot of fun playing quarterback. It's been great playing with these guys, but they are more than my guys. They are my family."

"We have 34 guys on the roster and a lot of them are really young," he said. "The fact we were able to hang with teams with 60-plus kids on the roster, like Narragansett, is a testament to the effort put in by the guys we do have."