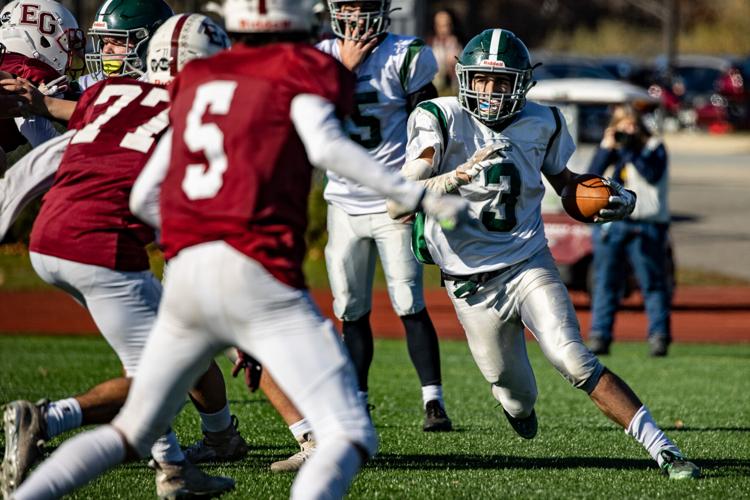 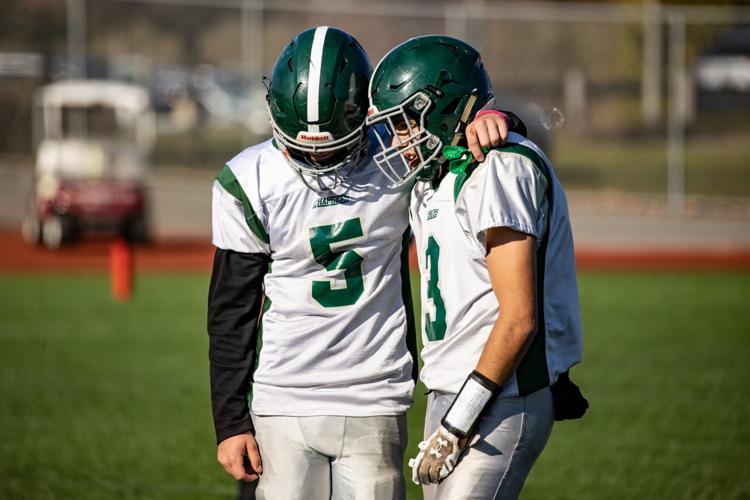 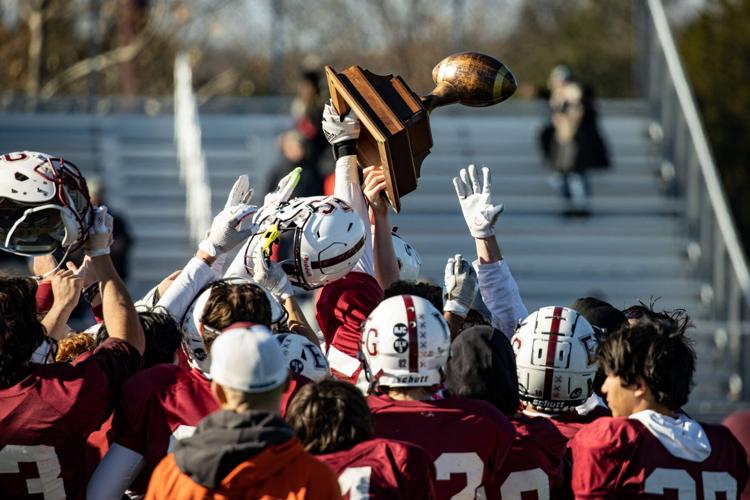 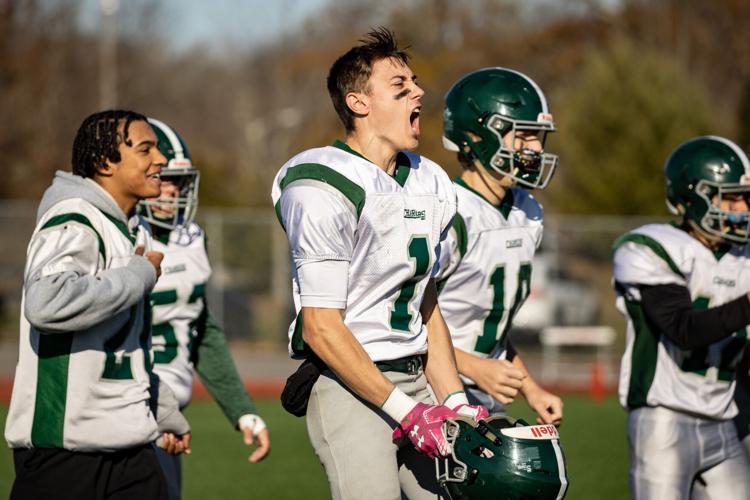 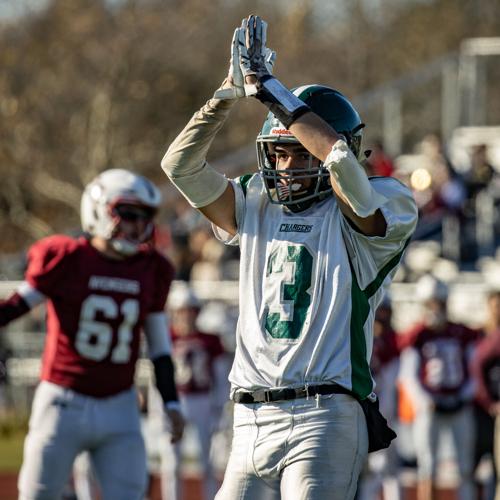 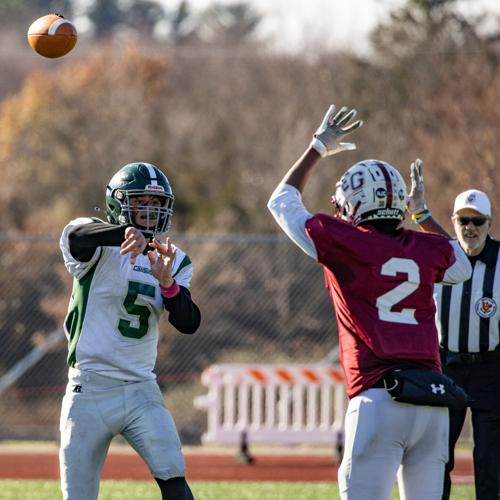 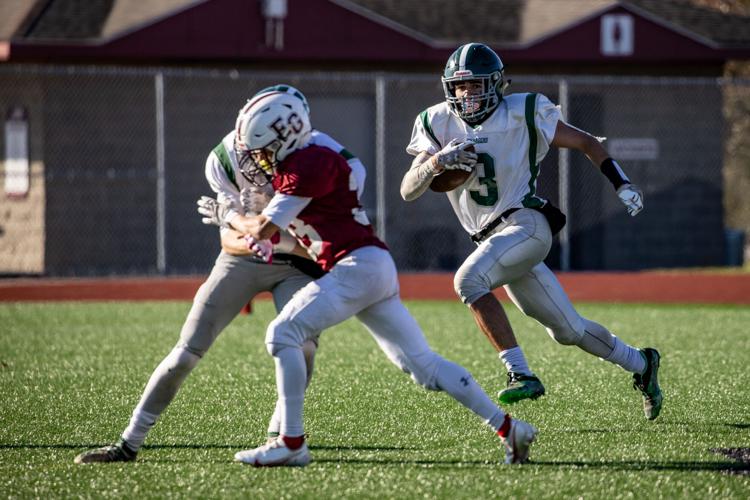 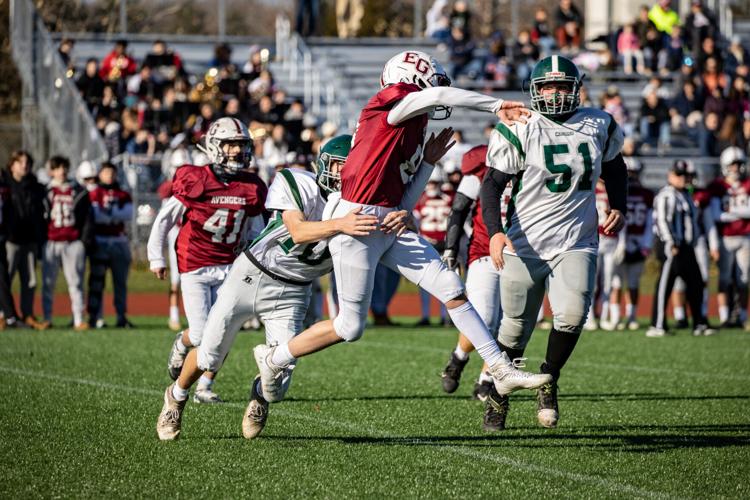 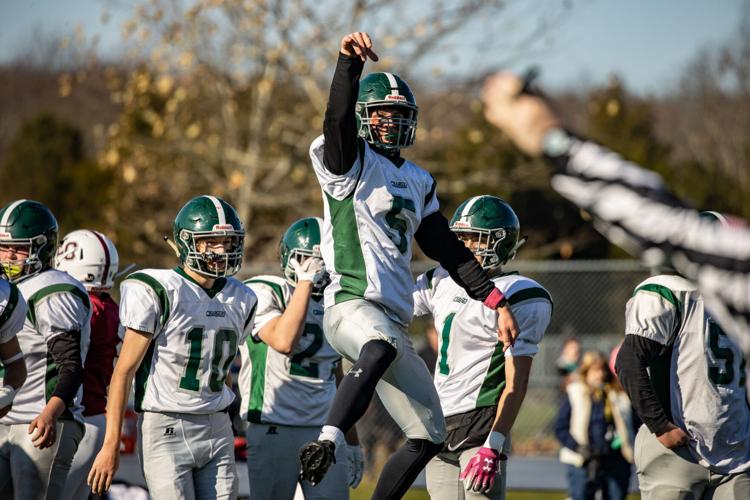 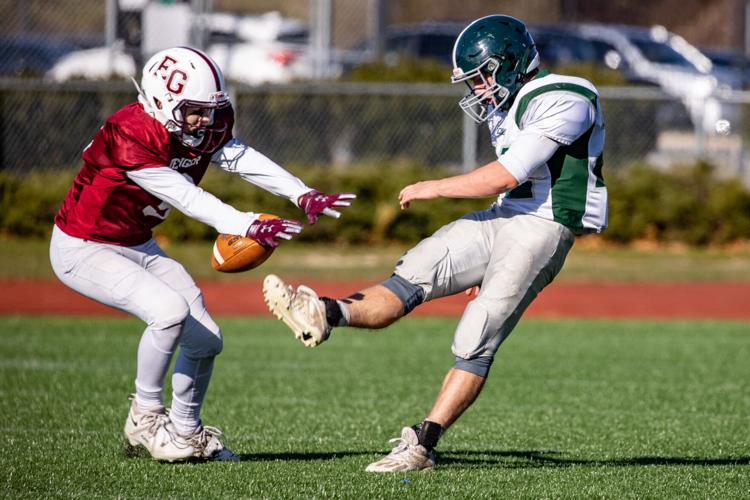 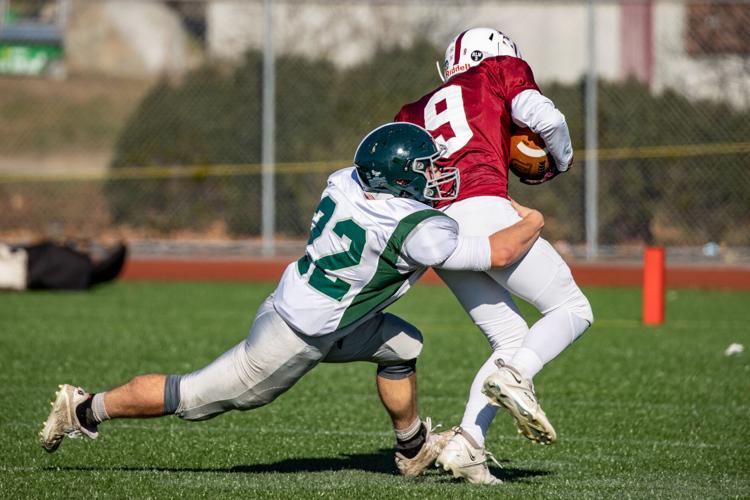 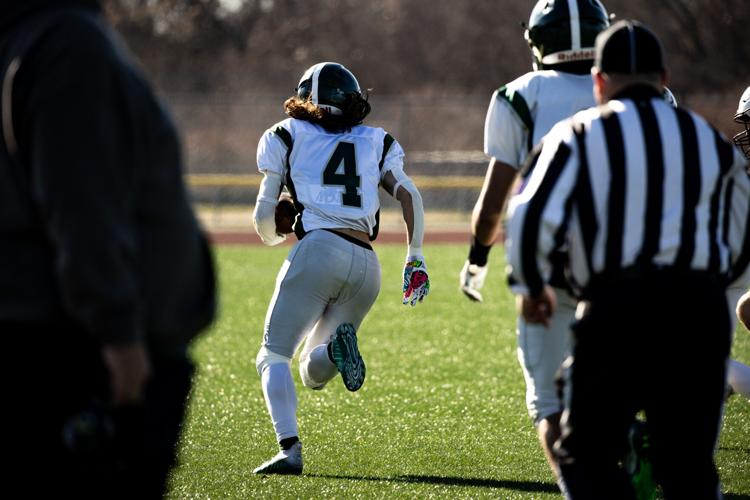 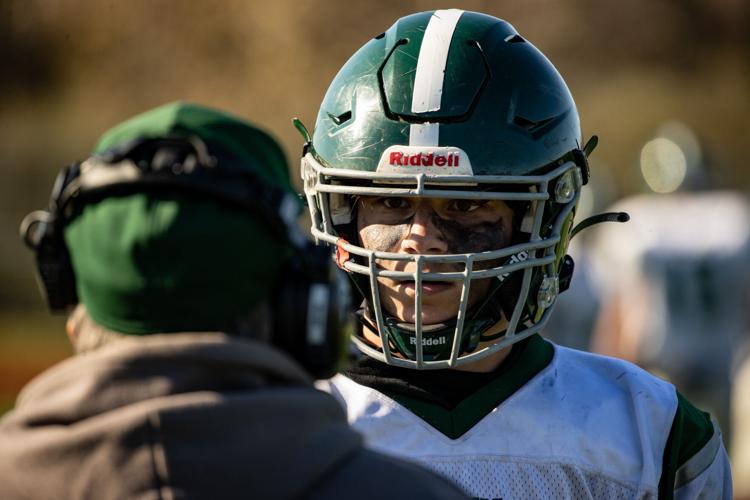 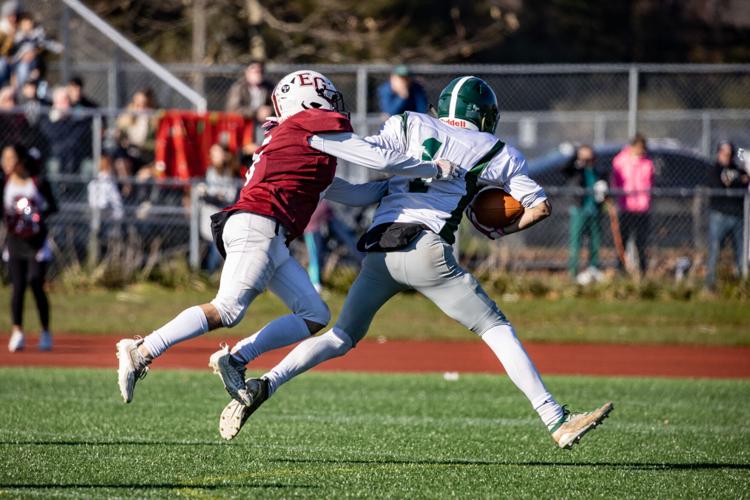 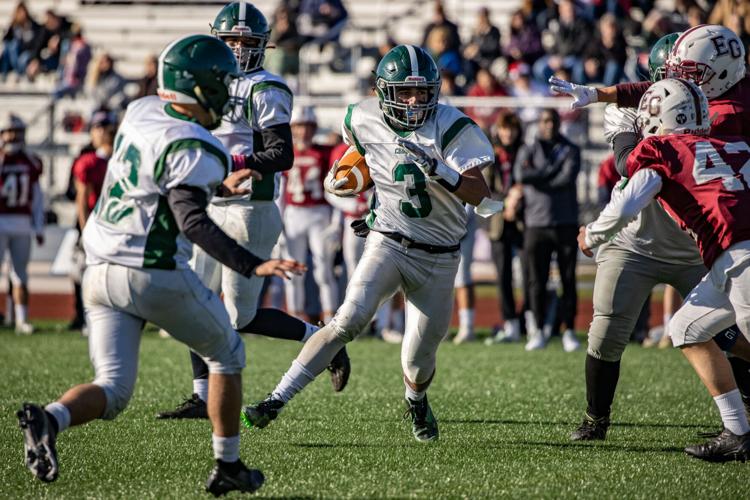 EAST GREENWICH — Fueled by late-game heroics on its way to the Division III playoffs this season, Chariho High ran out of fantastic finishes in a 20-8 loss to East Greenwich in the teams' fledgling Thanksgiving Day football rivalry.

The Chargers (6-5) cut a 13-2 halftime deficit to 13-8 late in the third quarter on Caleb Maggs' 71-yard touchdown reception. But instead of completing a fourth-quarter comeback, Chariho allowed a late touchdown to give the Avengers (2-8) just their second win of the season and their fourth straight without a loss in the Thanksgiving series. The teams did not play in 2020 because of the pandemic.

Some observers felt this was Chariho's best chance to break the ice in the young holiday rivalry, given its playoff status and East Greenwich's record. But the Avengers were clearly the more fired-up team, looking to show its strength as a Division II team.

"We were punching above of our weight class for most of the year," EG coach John George said. "We were overmatched and got overpowered physically in some matchups, but we looked at this game as a chance to get better and finish on a good note."

Chariho coach Bill Samiagio said his team did not practice at full strength leading up to the game and lacked the intensity it has shown in previous contests.

"We had struggles with some injuries and illnesses," the first-year coach said. "It was tough getting units together. And it didn't help that we lost [starting guard and captain] Nate Winthrop to an injury early. He helps run the offensive line and is a leader for us. To lose your starting captain took an emotional toll."

East Greenwich took a 6-0 lead on Alex Detomasis' 44-yard touchdown pass to Pat Kiernan, who was named Randall Realtors most valuable player for the game, just three minutes in. Chariho responded, with Collin Fitts returning the ensuing kickoff 60 yards to the 30. On the same drive, Chariho faced a fourth-and-goal from the 1, but quarterback Konnor Perrin was stopped short of the goal line.

Still, the Chargers got points back on the next play — tackle Isaac Hague tackled Carlos Gallegos (nine carries, 61 yards) in the end zone for a safety. Fitts returned the ensuing free kick 29 yards past the 50. A couple of first downs set up first-and-goal at the 3, but Chariho went 15 yards backward on negative runs and a holding penalty.

In the second quarter, Chariho couldn't capitalize on Perrin's interception and was forced to punt, which, after a bad snap, was blocked by Spencer Warburton and returned to the 18 with two minutes left.

East Greenwich took its time offensively and nearly ran out of time with two timeouts left, but the Avengers scored on Detomasis' 3-yard run with 2.6 seconds left before halftime to take a 13-2 lead.

Samagio admonished his team at halftime for not being mentally inspired for the game. The Chargers opened sluggishly again in the third quarter until Perrin (5-for-18 passing, 105 yards) hit Maggs on a 10-yard slant. Maggs broke a tackle near midfield and ran up the left sideline for a 71-yard scoring play with 2:52 left in the third quarter to make it 13-8. The conversion pass failed.

It remained a one-score game until East Greenwich's Tyler Kim's 11-yard touchdown run with three minutes left. A 15-yard pass from Detomasis to Warburton kept the drive alive on fourth-and-9.

Chariho rushed for just 50 yards on 21 carries and mustered 160 yards in total offense with six first downs. East Greenwich ran for 140 yards on 29 carries and passed for 115 yards.

"We had a shot until the end," Samiagio said. "It's a tough way to end but we had a great season."

Kiernan (four catches, 83 yards, one interception) was named player of the game.

"Early in the game we had open receivers, but either the line didn't give us enough time or the ball was thrown to the wrong guy," Samiagio. "We should have scored on the first two possessions. If we do, the game is ours."