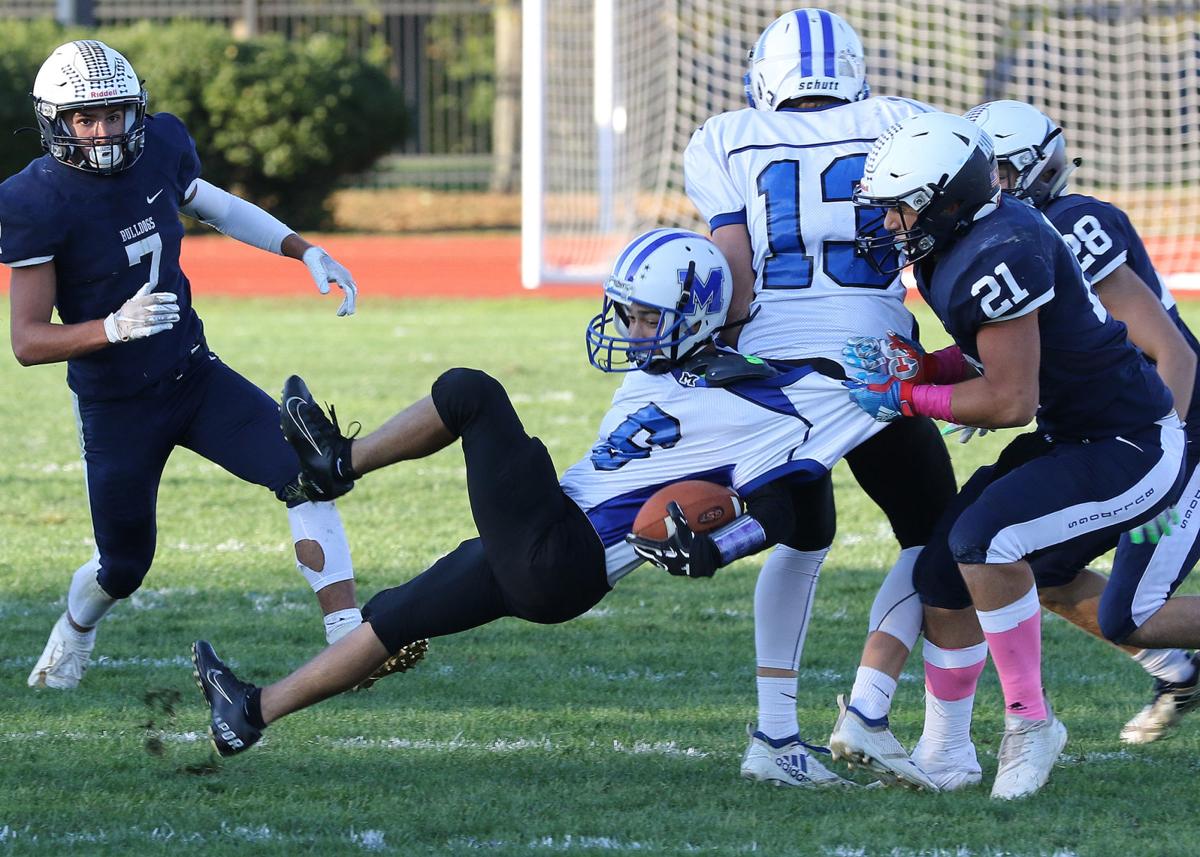 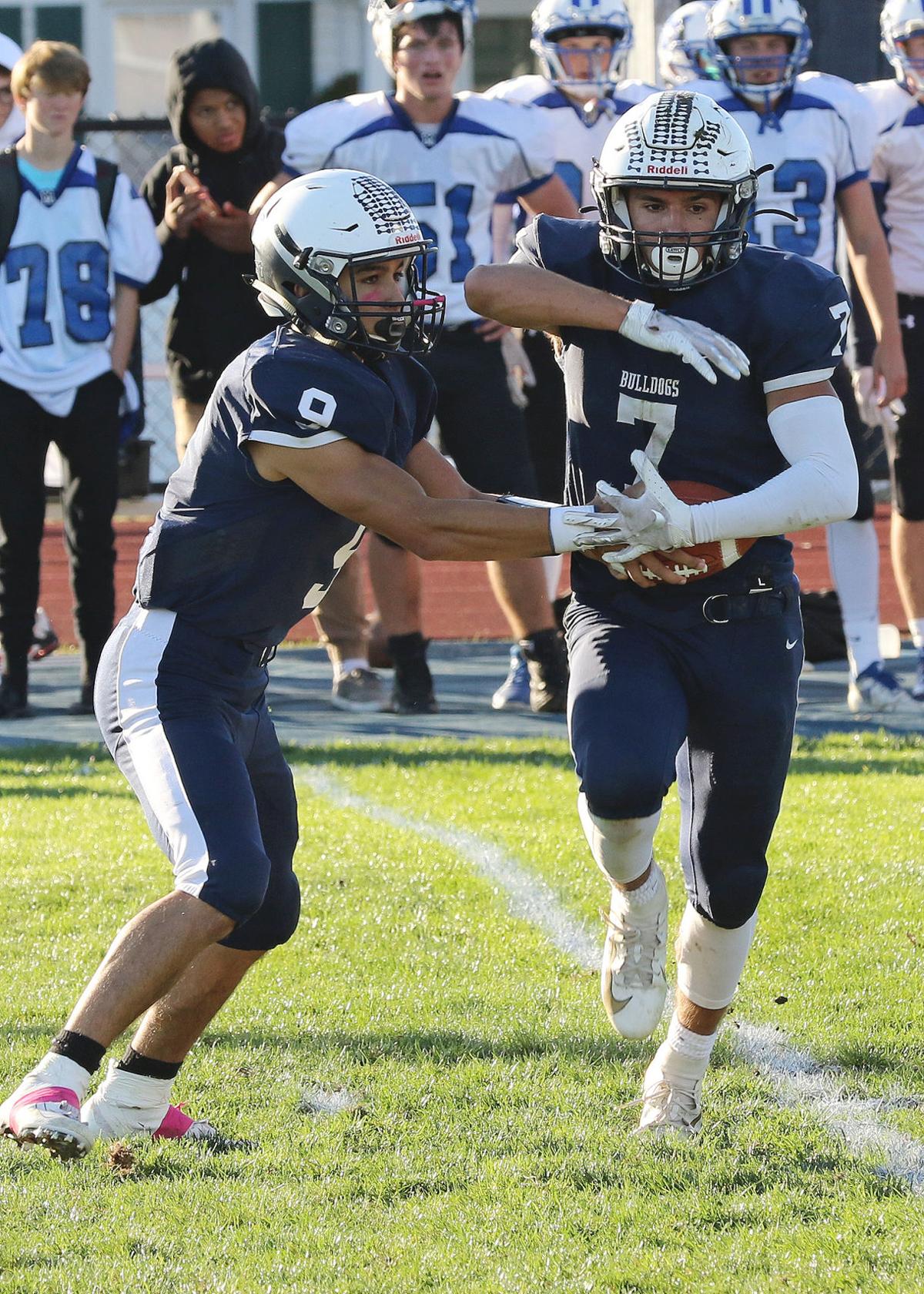 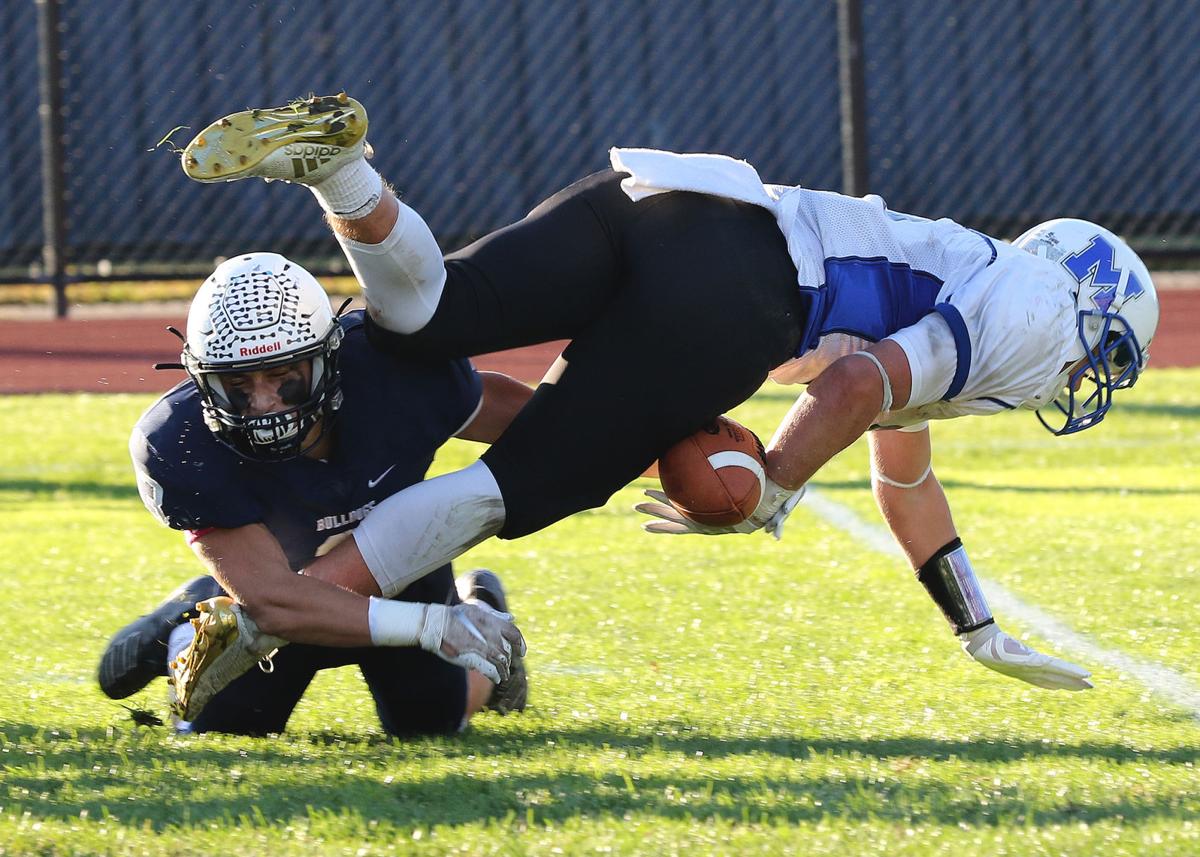 Westerly’s Anthony Durante takes down Middletown’s Andrew Skirenski during a game in October. Durante will play at UMass-Dartmouth next season. | Jackie L. Turner, Special to The Su 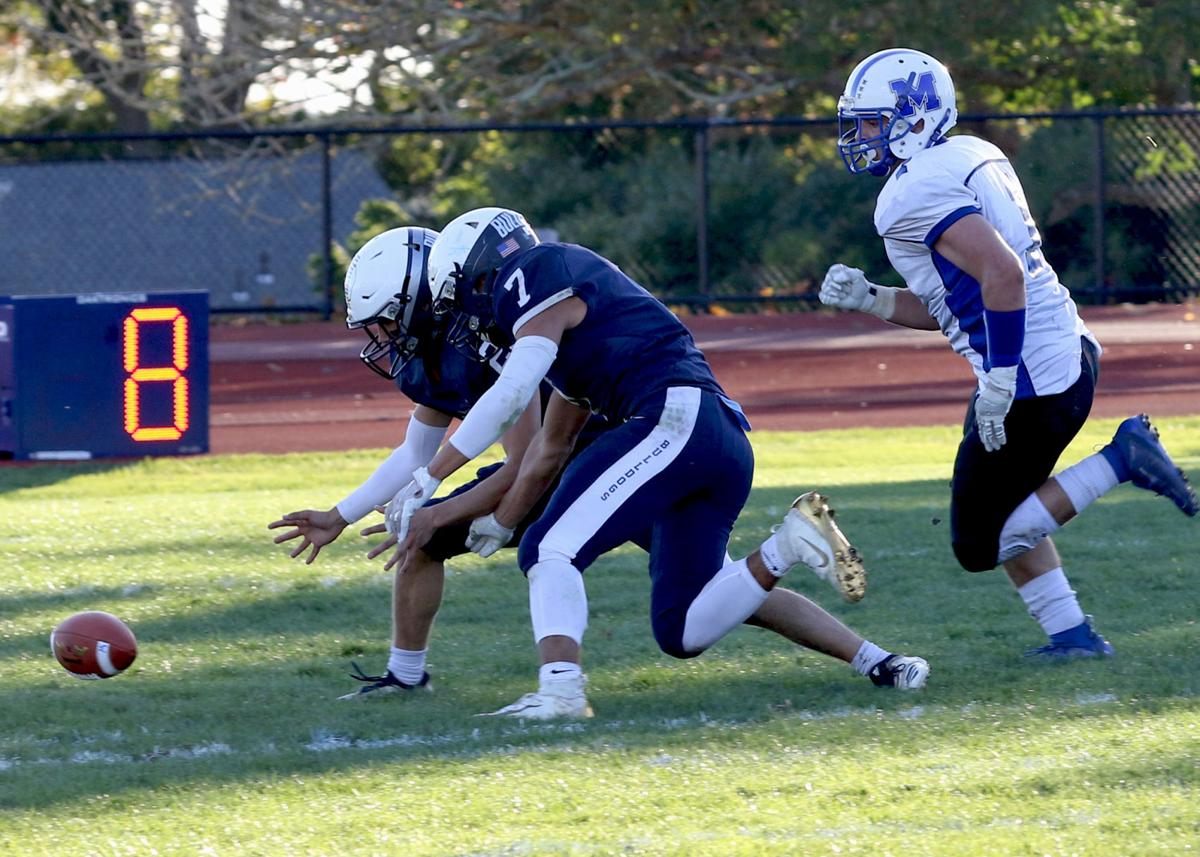 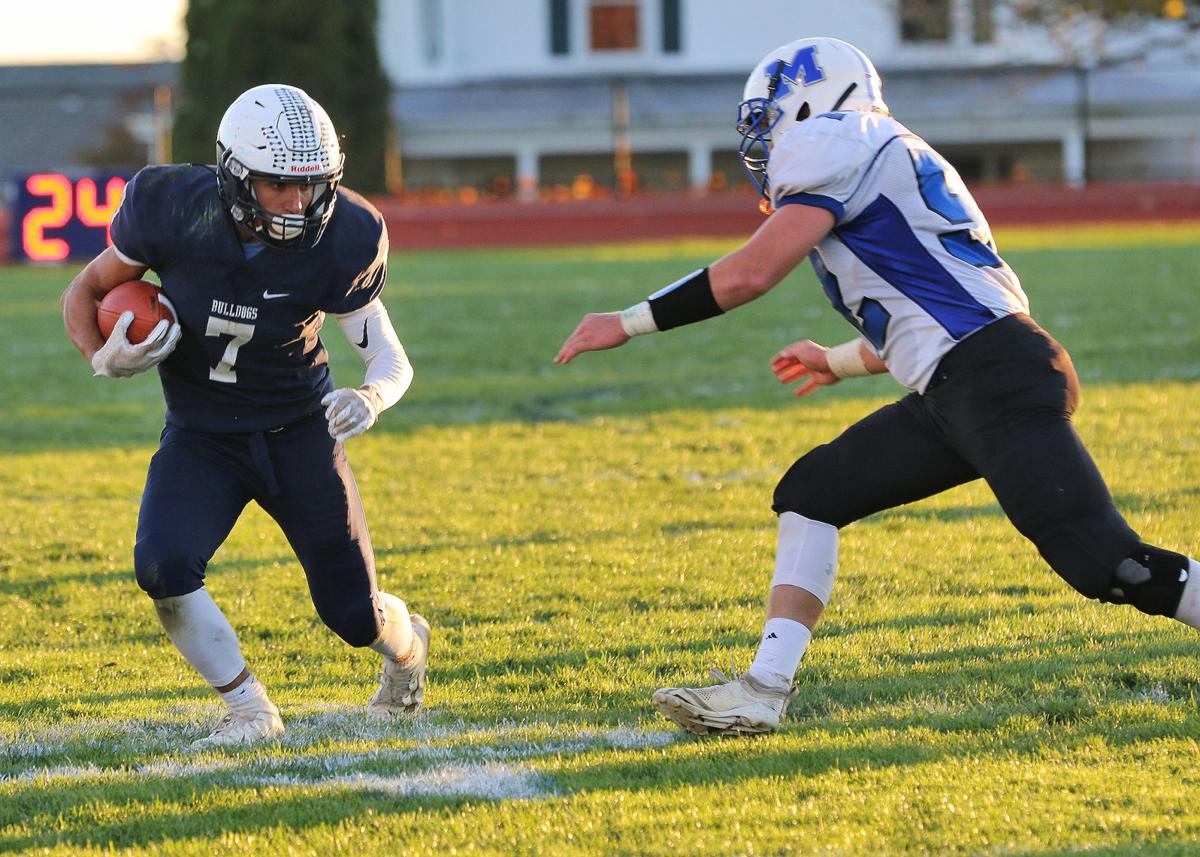 Westerly’s Anthony Durante takes down Middletown’s Andrew Skirenski during a game in October. Durante will play at UMass-Dartmouth next season. | Jackie L. Turner, Special to The Su

WESTERLY — When Middletown's Andrew Skirzenski scored on a 2-yard run with 11:25 left in Friday afternoon's Division II-B game with Westerly High, it appeared the game was clearly and most definitely over.

The Islanders had dominated the contest to that point, rolling up 31 points while shutting out the Bulldogs.

But what was even more impressive was how the Islanders built the huge lead. They dominated the line of scrimmage, collecting 21 first downs at that point in the game. Westerly had just five.

It wasn't even a contest. Westerly was headed to one of  its most lopsided losses in Duane Maranda's four years as coach.

But the Bulldogs came to life, scoring four touchdowns in less than nine minutes before losing to the Islanders, 31-26, at Augeri Field.

Westerly had a chance at an onside kick recovery with eight seconds remaining. The ball bounced off a Middletown player, but the Islanders recovered for the victory.

"In the middle of the third quarter, I was thinking about how I could find a way to spin this into a positive," Maranda said. "But from then on we found a way to keep fighting. Every one of our games has been close this year so the kids know to keep fighting. I was really proud of the way they didn't give up."

Westerly got on the scoreboard when Anthony Durante broke a 43-yard counter play for a score with 8:41 left to make it 31-6.

Westerly stopped Middletown on its next possession, and the Islanders went for it on fourth down from Westerly's 45-yard line and came up short.

Middletown could not make a first down on its next possession.

But the Bulldogs were out of timeouts, and the Islanders were able to run out most of the clock.

Still, it wasn't over.

Middletown tried a double reverse on fourth down from its 44. Westerly's Jared Keszyinki stripped the ball and ran 40 yards for a touchdown to make it 31-26 with 8 seconds left.

On the conversion attempt, Westerly could not get its act together with a pair of penalties, and Cillino's run was short.

That set up the onside kick.

Late in the first half, Westerly's Chad Mayne had a 37-yard field goal attempt hit the crossbar and fall short. The kick would have been good if it had been a few inches higher. If that had happened, the Bulldogs would have been going for a tie after its final touchdown instead of trying to reduce the deficit to three.

Westerly senior middle linebacker Derek Mason left the game in the second quarter with an injury and did not return until the fourth quarter.

"I think having him back on the field gave us a lift. We started making plays and momentum can be such a crazy thing in a high school football game," Maranda said.

Middletown led 12-0 at the half — Tyron Francis scored on runs of 20 and 4 yards. And Marcos Remy opened the second half by scoring on the first play from scrimmage, a 65-yard run. He was untouched on the off-tackle play.

"They were dominating the line of scrimmage and winning most of the one-on-one blocks," Maranda said.

"We moved them up just to have them come off the edge and stop their sweep game. And it worked for three quarters," Middletown coach Art Bell said.

"We needed to get back on track after that East Greenwich game," Bell said. "Then we took things for granted in the fourth quarter and let them sneak back in. That's something we have to work on."

Did Westerly's fourth quarter take some of the luster off the Middletown win?

"No, because they are a good football team," Bell said.

PHOTOS: A high-profile tribute for seniors from St. Michael's

Westerly police recruits getting a hands-on lesson in adaptation