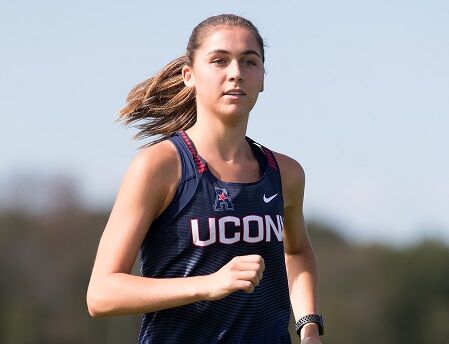 Randi Burr, an All-New England performer at Westerly High, had a severe reaction to a bee sting her freshman season at UConn. With the help of doctors, she has since recovered to run strong times for the Huskies during her sophomore cross country and indoor track seasons. | Photo courtesy Steven Slade, UConn Athletics 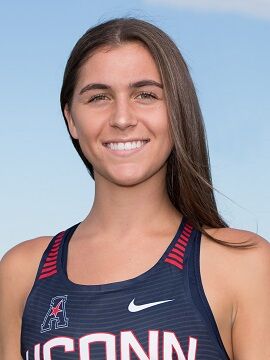 Randi Burr, an All-New England performer at Westerly High, had a severe reaction to a bee sting her freshman season at UConn. With the help of doctors, she has since recovered to run strong times for the Huskies during her sophomore cross country and indoor track seasons. | Photo courtesy Steven Slade, UConn Athletics

WESTERLY — Randi Burr sat in her doctor's office and sobbed for 20 minutes.

It was the middle of her freshman year at the University of Connecticut and she was not in a good place.

The former All-New England and All-State runner at Westerly High was struggling to find answers to a serious health issue.

Her doctor gave her a dire prognosis.

"She told me I was allergic to running," Burr said. "She said I would never exercise again."

Hardly what a Division I track athlete wants to hear. It was devastating. Burr was at her dream school, her mother's alma mater, and things were falling apart.

Burr's trouble started back in the fall during the cross country season. It was the day before the American Athletic Conference championship meet in New Orleans in October 2018. The team was running the course to get familiar with the layout.

"I felt a bee fly into my mouth. I was trying to get it out, but it stung me," Burr said. "My mouth and lip just blew up. It was so embarrassing."

Burr had never experienced an allergic reaction to a bee sting before that day.

The next day she still competed in the AAC meet, placing 32nd. She had a tough time during the race.

"I just picked out one of my teammates, and all I could do was follow her. All of a sudden I felt so drowsy. I just didn't feel like myself," Burr said.

Things worsened during the indoor track season at the opening meet.

"I went into anaphylactic shock my first race. Every single indoor race after that I turned bright red and was covered with hives," Burr said.

After she competed, Burr would have to sit in a chair with ice packs, and an athletic trainer would be nearby with an EpiPen, if needed.

Burr was also having problems when she ate, often having severe stomach aches. Running, which had been a passion in her life, was hardly that anymore.

"I was terrified at the starting line. Coach [J.J.] Clark was always positive, telling me this would be the race [breaking out in hives] would not happen," Burr said.

But it never worked out that way.

Practices were difficult, but not nearly as bad as the races. Burr thinks the mix of adrenaline and competing contributed to the serious issues she experienced in races.

Burr was making visits to "a bunch" of doctors, but was unable to find any solutions.

Why didn't she just take the season off?

"I felt so defeated at times. But I never gave up," she said. "I know a lot of girls that struggle with different things in the transition to college. Running does a lot of stuff to your body. I thought, 'This is my freshman struggle. I have to get through this year and reset.'"

Finally, in March, near the end of the indoor season, doctors were able to pinpoint the cause of Burr's problems.

"I was allergic to about 30 different foods. I couldn't eat corn, bananas, a staple for runners, wheat or soy," she said. "I realized I had mixed up the feelings of being full and having a stomach ache.

"I think I've had this gene my whole life and somehow the venom in the bee sting triggered the allergies."

Despite having a prognosis in hand, Burr struggled during the outdoor season.

"I kept messing up the eating thing. Living in the dorm and eating at the dining hall is hard. They aren't always truthful about what is in the food. I was eating the plainest food possible — salad and rice," she said. "In the outdoor season, I was trying to get better. I think if my parents ever saw me in the condition I was in, I have no doubt they would have pulled me off the track forever."

Being allergic to corn means corn syrup either, an ingredient in many foods.

"I can have pizza, but the crust has to be a cauliflower and the sauce can't have any corn syrup," Burr said. "So many foods have so many chemicals."

Burr came home that summer and was able to finally figure out her diet. She started feeling better, much better.

Clark, who had recruited Burr, moved on to Stanford. Lindsay Crevoiserat, a three-time All-American at UConn, was hired as head cross country coach. She also coaches distances runners in the track season, and Burr said she is "a great coach."

"We had a lot higher mileage and I really took training seriously that summer," Burr said. "I made huge jumps being at home."

It showed in the fall. Burr was the No. 2 scorer for UConn in three cross country meets and third in another. She finished 21st at the AAC title meet, the second scorer for the team.

During the indoor track season, she established a personal-best time of 9:56.46 in the 3,000 meters when she finished fifth at the New England championships in January.

She was very much looking forward to the outdoor season before the pandemic wiped it out.

"Finally, I was getting really excited about running. I finally felt I could be competitive again then corona came," Burr said.

She is running about 60 miles a week now and preparing as if the cross country season will take place in the fall. She is uncertain if it will actually happen.

But considering all she has endured, Burr is ready for just about anything.

"I think at the beginning of this I really didn't know what was going on and why it was happening," she said. "But I had a lot of support from the other girls on the team, my coaches and my family and my old Westerly teammates. It meant a lot. It helped get me through it."