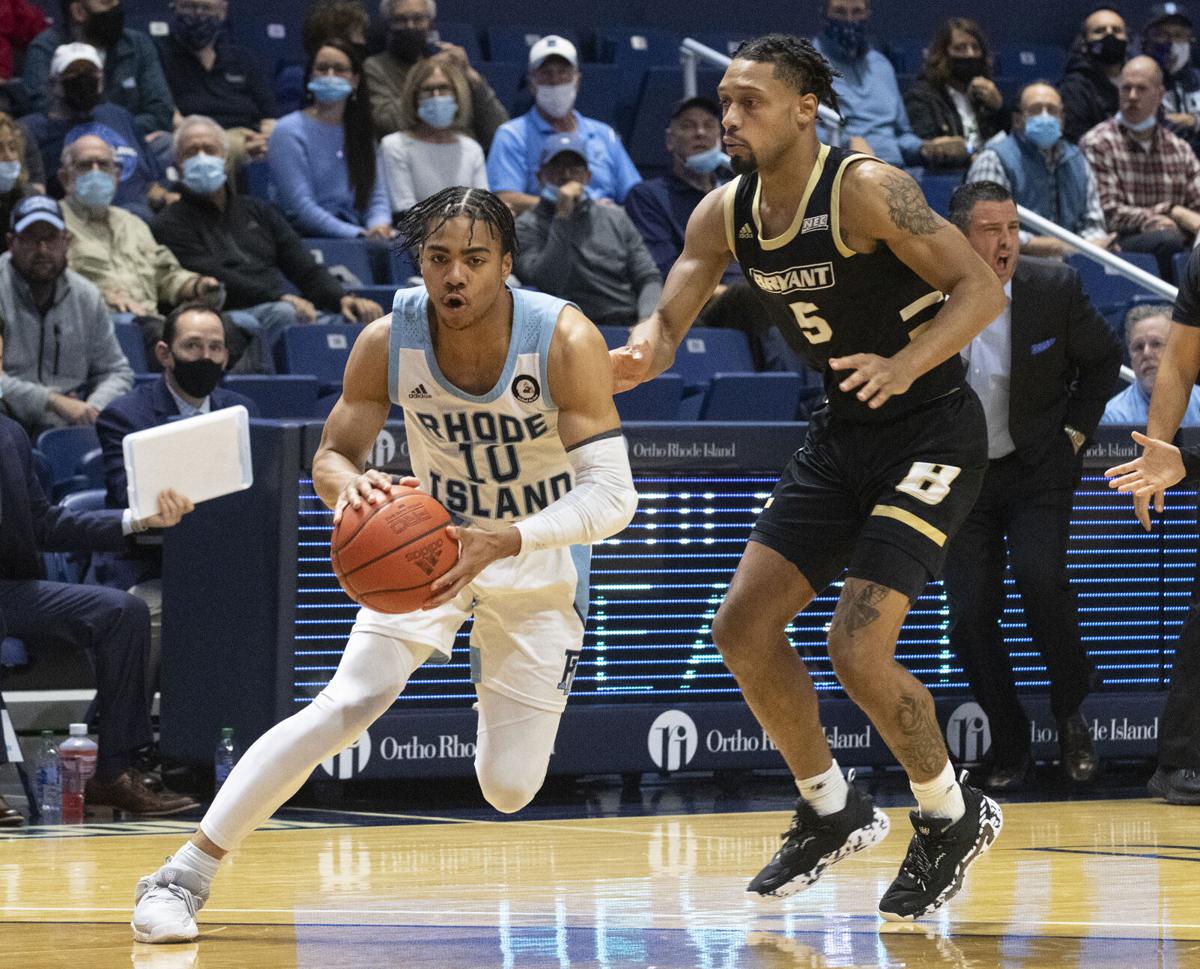 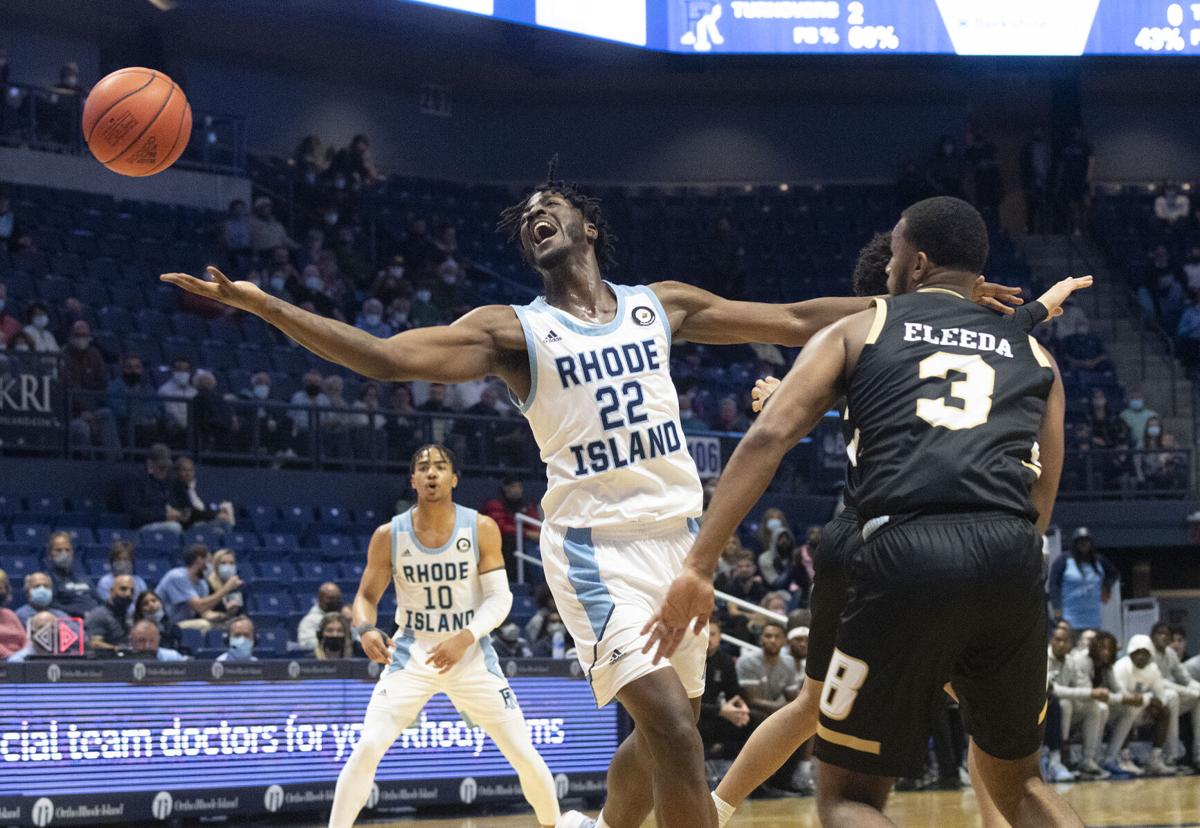 URI's Makhel Mitchell loses control of the ball during Friday's game against Bryant at The Ryan Center. | Michael Derr, Special to The Sun 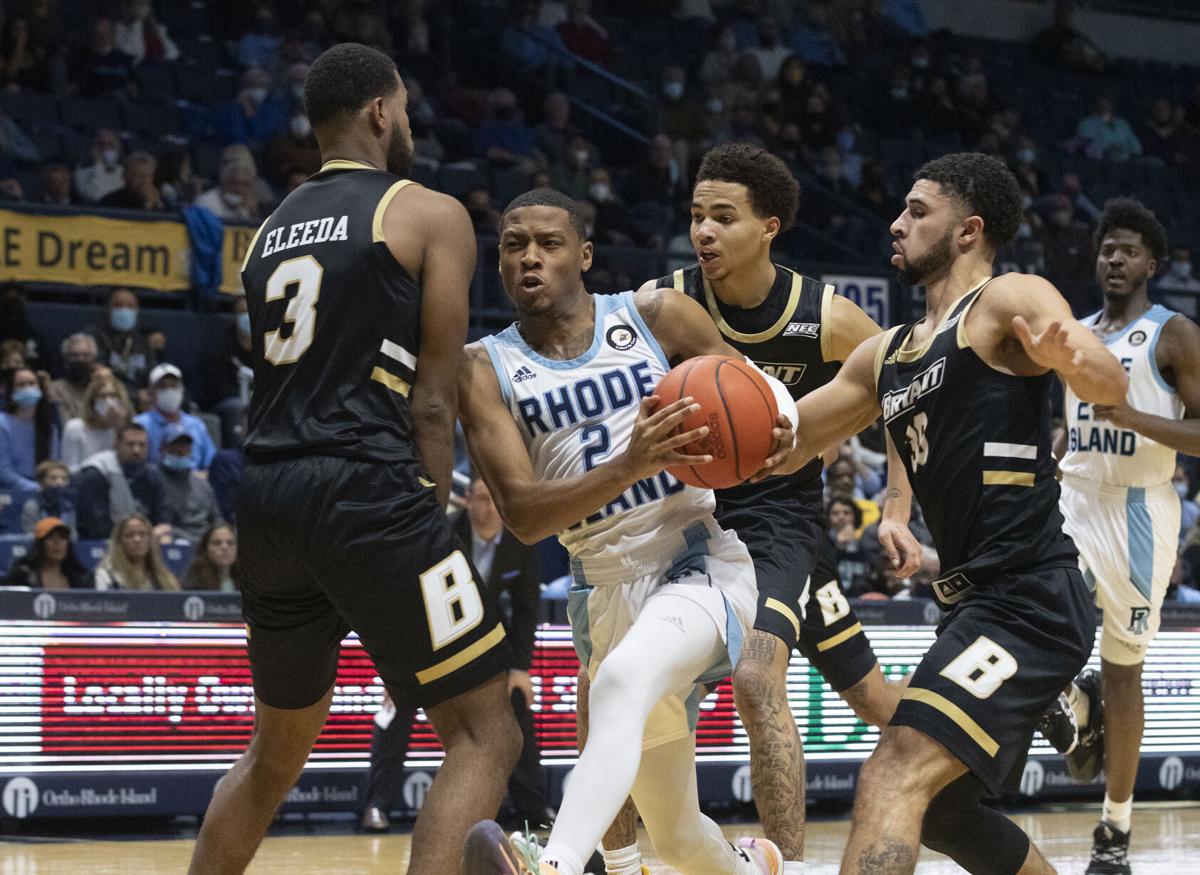 URI's Jeremy Sheppard fights his way through a host of Bryant defenders during Friday's game at The Ryan Center. | Michael Derr, Special to The Sun 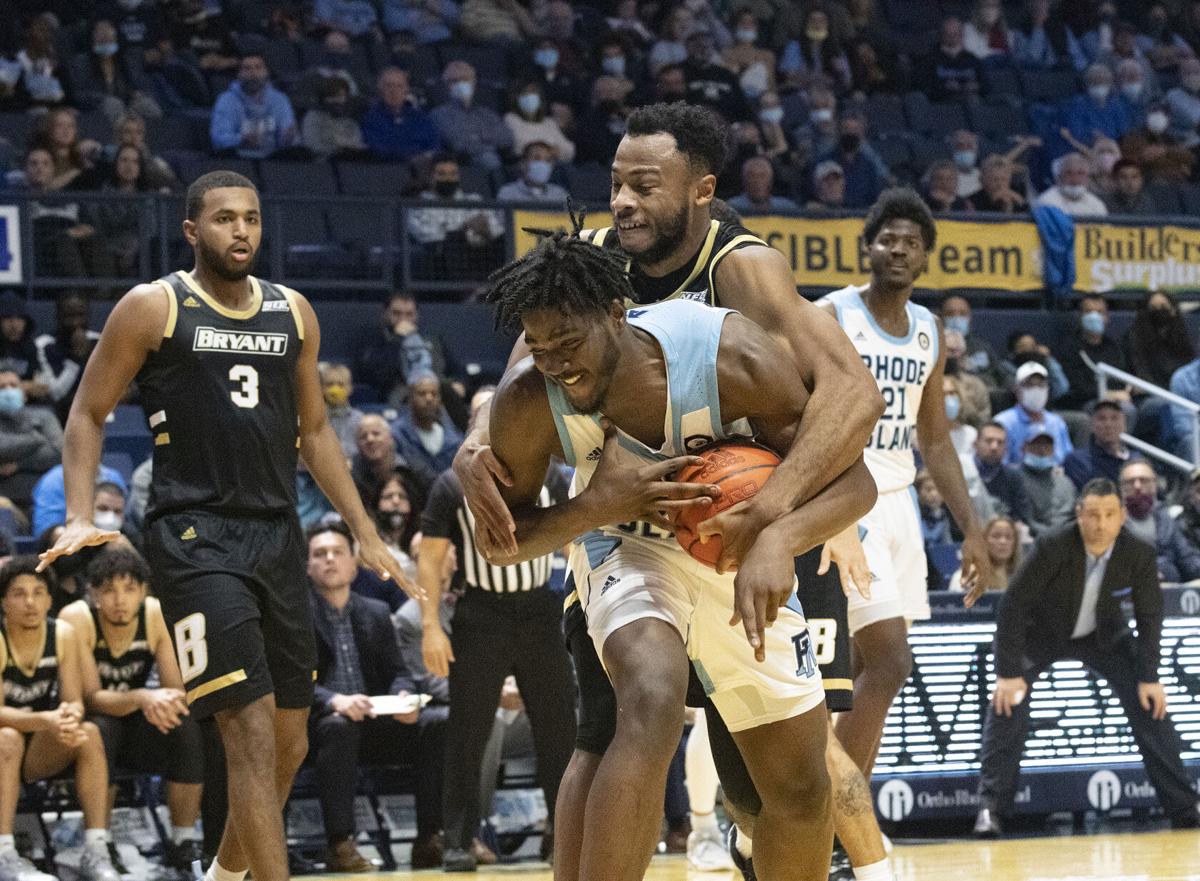 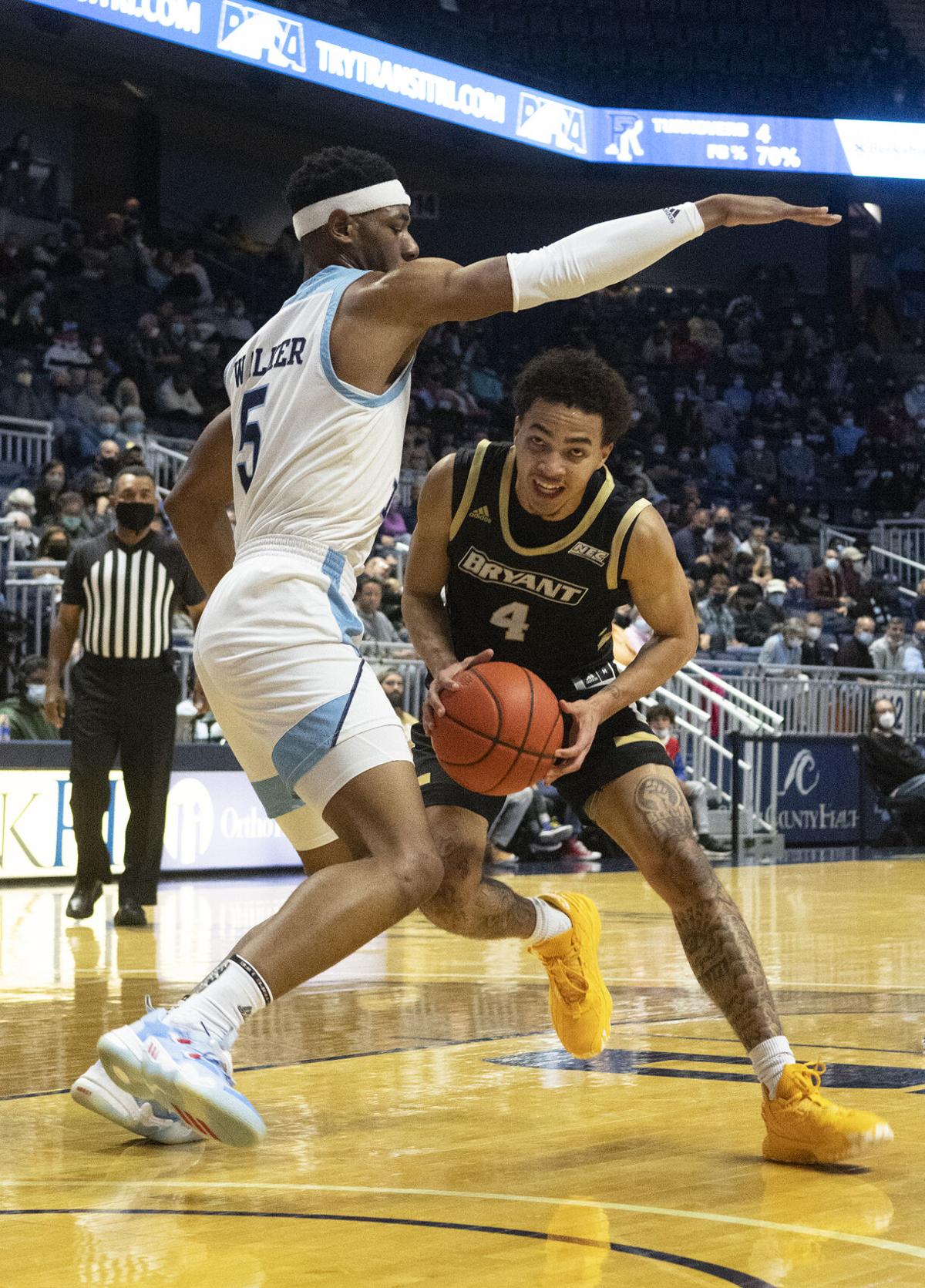 Bryant's Tyler Brelsford gets past URI's Antwan Walker during Friday's game at The Ryan Center. | Michael Derr, Special to The Sun

URI's Makhel Mitchell loses control of the ball during Friday's game against Bryant at The Ryan Center. | Michael Derr, Special to The Sun

URI's Jeremy Sheppard fights his way through a host of Bryant defenders during Friday's game at The Ryan Center. | Michael Derr, Special to The Sun

Bryant's Tyler Brelsford gets past URI's Antwan Walker during Friday's game at The Ryan Center. | Michael Derr, Special to The Sun

SOUTH KINGSTOWN — There was a path to an in-state stunner Friday night, and Bryant was very much on it.

Until Rhode Island blocked it.

After the Bulldogs hit nine 3-pointers in the opening half and took a lead early in the second half, the University of Rhode Island men's basketball team clamped down on its neighbors to the north and pulled away for an 83-64 victory at the Ryan Center.

A nearly nine-minute field goal drought by Bryant paved the way for the Rams to take control midway through the second half. They outscored the Bulldogs 24-4 in that span and were never threatened once they got the lead.

“I told them at halftime that team was extremely confident and they were going to come out here with a plan to beat us, and it was a good thing,” URI coach David Cox said. “We were going to have to respond. It was a good early test, playing against a confident team like that. I thought the team played together. I thought they trusted each other, particularly at the defensive end.”

The game was a home-site matchup in the Sunshine Slam event, which will take both teams to Daytona Beach, Florida, Nov. 20-21. It doubled as a fun Ocean State matchup, the second between URI and Bryant in the last four seasons. (In 2018 — debuts for both Cox and Bryant coach Jared Grasso — the Rams won 97-63.)

Much has changed for the Bulldogs in the years since, and Friday night there was never a doubt that they belonged on the same court with the Rams, even though the game ultimately slipped away. Bryant put up the fight with two of its top players, Peter Kiss (violation of team policy) and Greg Calixte (flu), sidelined.

“We ran out of gas a little bit,” Grasso said. “We struggled shooting the ball late. I thought my guys competed hard. We were a little undermanned today. I would have loved to play this game with a full team. Unfortunately, we had what we had and a lot of times we were really small. But credit to URI. They kind of physically out-toughed us in the second half. They dug in and guarded.”

URI’s defense exerted control again, just as it did in the season-opening win over Boston University. Bryant made only two shots from inside the arc in the first half but hit on 9 of 25 3-pointers, taking advantage of an active URI defense to find open shots off drives and offensive rebounds. The Bulldogs tallied an assist on each of their 11 first-half buckets.

The second half featured far fewer open looks. Bryant shot just 23% from the field after halftime and made only 3 of 14 3-pointers, as URI put the emphasis on sticking with shooters.

“We wanted to stay home on the shooters a little more, stay in those gaps. We had to stay in front of the basketball, couldn’t over-help as much,” Cox said. “We felt like if we just stayed with it and kept the pressure up — didn’t give them clean looks — we would eventually wear them down. I think you’ve got to give these guards a lot of credit for putting the pressure on and the big guys for defending the paint.”

Charles Pride scored a game-high 25 points for Bryant and carried his team early in the second half, scoring its first 12 points. Ishmael Leggett kept URI afloat during that stretch with two 3-pointers.

A driving layup by Sebastian Thomas started a 6-0 burst, which also included a runner by Leggett that gave URI the lead and a jumper in the lane by Malik Martin. Ishmael El-Amin scored on the break, Thomas hit a 3-pointer and Makhel Mitchell drilled a jumper from the elbow as the Rams began to pull away. A 3-pointer by Jeremy Sheppard bumped the lead into double digits, where it remained for the rest of the night.

“The first half, they punched us in the mouth,” Leggett said. “The main thing we talked about at halftime was setting the tone. At first, it didn’t go our way. After those few minutes went by, we settled into the game and made the punch we needed.”

Makhel Mitchell led four Rams in double figures with 17 points. Makhi Mitchell had a double-double with 13 points and 18 rebounds despite foul trouble. Leggett added 13 points, and Sheppard finished with 10. Antwan Walker and Malik Martin both had nine off the bench. In his second game as a Ram, Thomas scored seven and impressed the coaching staff with his defensive pressure.

Turnovers loomed on the negative side again. The Rams finished with 19 giveaways after losing 17 in the season opener, though they did up their assist total to 15. They also shot 50% from the field, while hitting 5 of 13 from 3-point range.

“I thought we shared the ball really well at the offensive end. We didn’t force many shots tonight,” Cox said. “Too many turnovers, but we do play with a lot of freedom. I let the guys play with a lot of freedom and that usually bodes well for their confidence. We’ll address the turnover issues, but I thought they shared the ball well, stepped into shots confidently and had a great team effort that second half, on both ends of the floor.”

The tests get tougher for Bryant, with a trip to Clemson coming next.

“My kids played hard,” Grasso said. “We’re going to be fine. It’s November 12th. We have a long ways to go. We’re going to get a lot better. I’d like to play this game again in March, when we have a full team and we have five months with these guys. We’re still evolving. We’re nowhere near where we’re going to be. We’ve had guys in and out — couple of suspensions, couple of injuries, couple of guys sick. We’re still finding ourselves in a lot of ways, but I like this group. They’re tough. They competed.”

URI hosts Boston College next Wednesday, and will head into its toughest matchup yet with a 2-0 record.

“This is a really great team effort, a great battle,” Cox said. “I’ve got to give Jared and Bryant a ton of credit. They are a tough team to play against because of the pace and the many 3s that they shoot. I thought we showed up in the second half in a big-time way and came out of here with the really solid victory.”