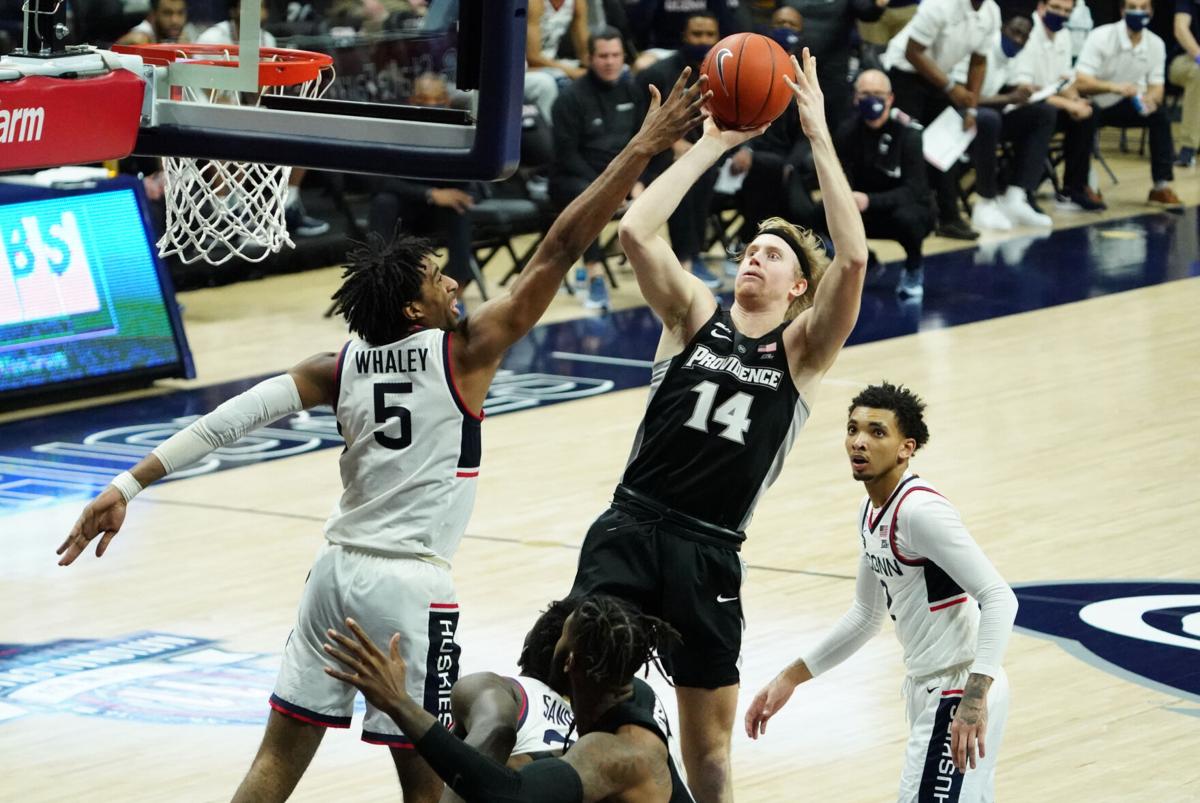 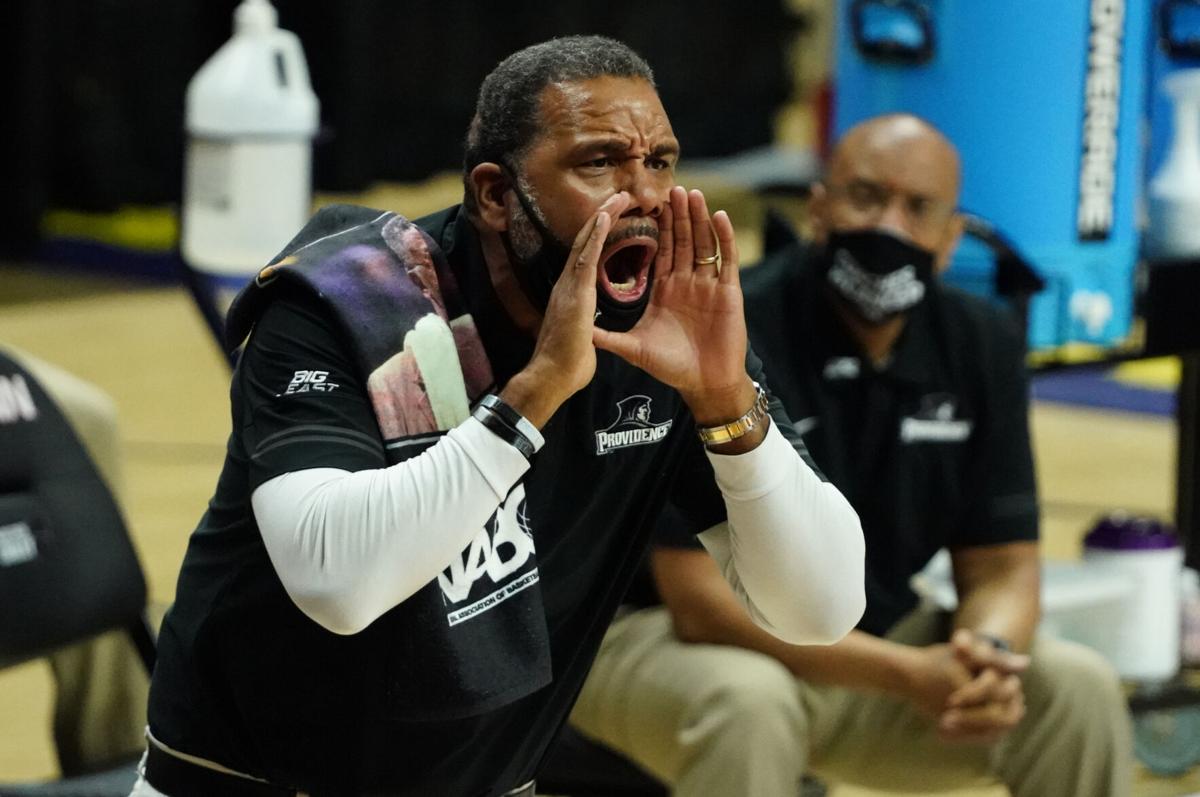 Providence coach Ed Cooley reacts the sideline in the first half against the Connecticut Huskies at Harry A. Gampel Pavilion. | David Butler II, USA TODAY Sports 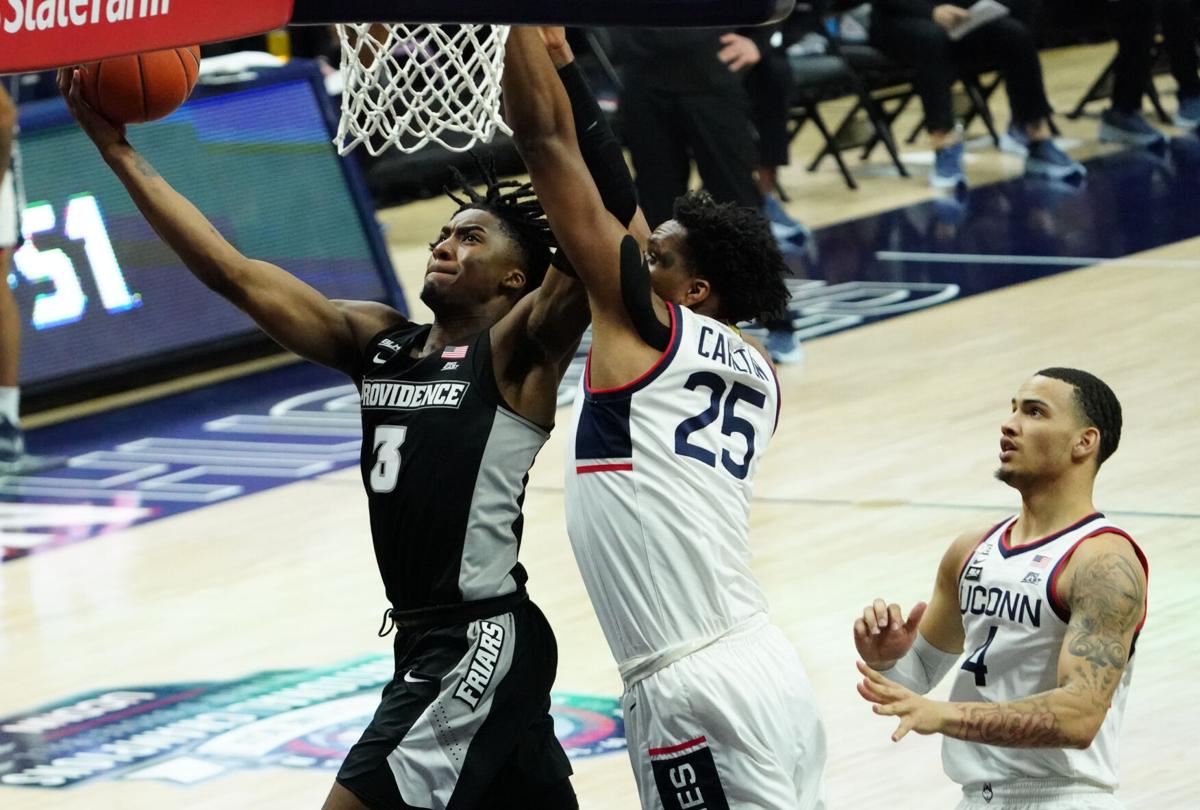 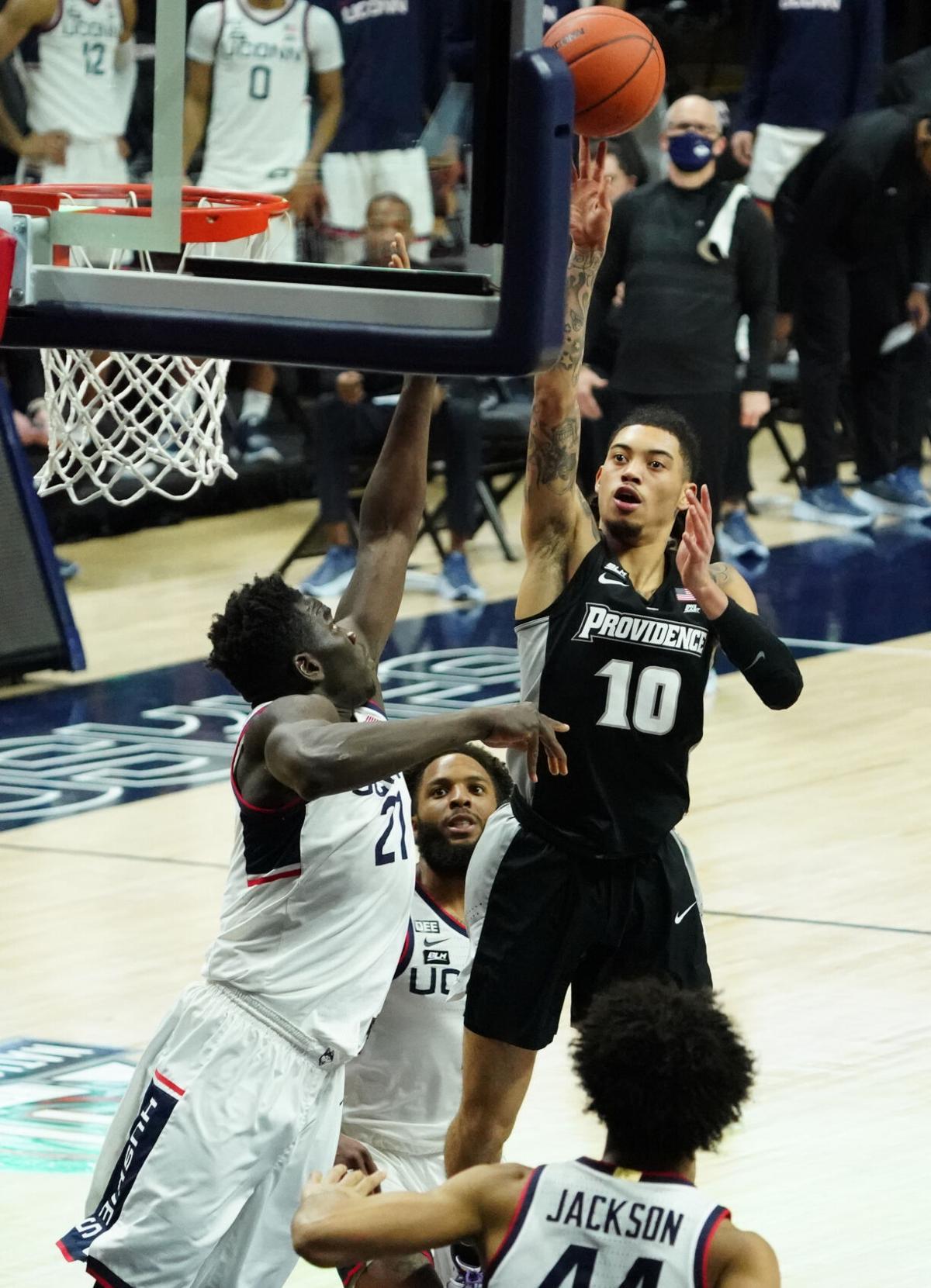 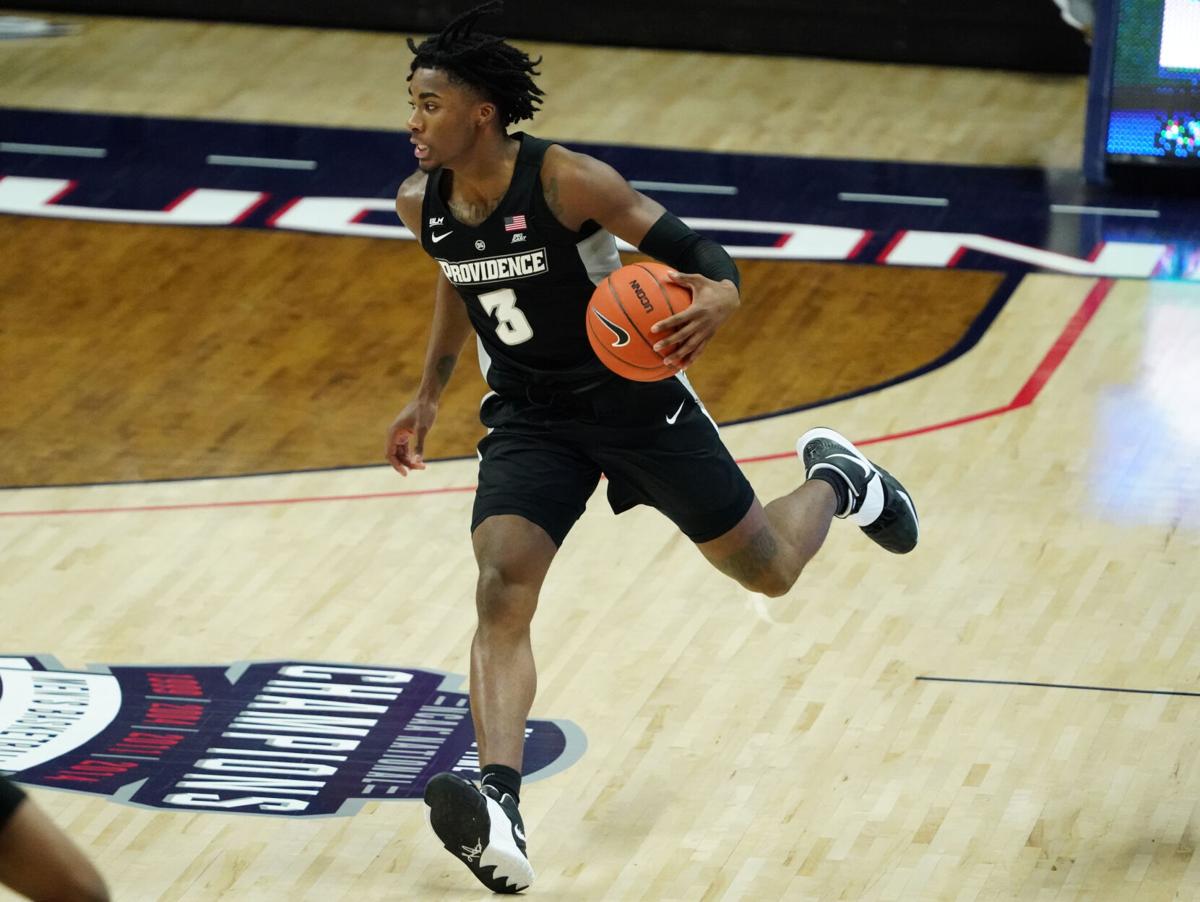 Providence coach Ed Cooley reacts the sideline in the first half against the Connecticut Huskies at Harry A. Gampel Pavilion. | David Butler II, USA TODAY Sports

STORRS, Conn. — Can a college basketball team change its stripes in less than a week?

If you’re the UConn Huskies, the answer is a resounding yes.

Featuring a lineup that bared little resemblance to the one that limped its way to producing a season-low 59 points in the first matchup with Providence College, Connecticut unleashed an all-out assault that turned the tables and then some.

It was a triumphant return for sophomore guard James Bouknight following an eight-game absence due to an elbow injury that required surgery. UConn’s leading scorer had plenty of help from Tyrese Martin and R.J. Cole in the Huskies' 73-61 win Tuesday night inside Gampel Pavilion.

Bouknight came off the bench and shared co-high-scorer honors with Martin — both finished with 18 points — while Cole had 13.

“[Bouknight’s] talent level is unquestionable, but Cole and Martin, you can see where they’re getting a lot more comfortable,” PC coach Ed Cooley said. “It was a totally different club from the one we played in Providence.”

While UConn’s main cog hummed along, the same could not be said about PC’s top two power sources. David Duke finished 3 of 16 from the field for 14 points while Nate Watson wasn’t much better (3 for 9, six points). For the umpteenth time this season, the Friars couldn’t shoot straight — 36.2% — and were beaten up on the glass, 42-32, and in the paint, 46-28.

“I thought their urgency and desperation was much greater than ours,” Cooley said. “It wasn’t an X-and-O game. It was a street fight, and they were victorious in the street fight. They were physically better than us today. If we’re going to be a competitive team in the Big East, we’re going to have to play a level of basketball which they did — physical in front of the rim and playing inside-outside.”

With their roster finally free of the injury woes, the Huskies (10-5, 7-5 Big East) appear primed for a productive stretch run. On the flip side, the Friars (11-11, 7-9) are heading down a one-way road with a sign that reads, “Must win postseason conference tournament to go dancing.”

“Until that last buzzer goes off, I think there’s an opportunity every single night,” Cooley said. “You have three opportunities [with remaining games against Xavier, St. John’s, and Villanova] and anything is possible. Talking to our players about our opportunities to play in March, I feel we blew opportunities [earlier in the season]. You say something quick and move on. We can’t control what happened in the past. You’ve got to deal with the present and control what we can in the future.”

With their two scorers saddled with two fouls that wiped away a great deal of their usual effectiveness, the Friars had no choice but to piece together a first half that left them within shouting distance at halftime. Watson and Duke combined for 10 points in 23 minutes with the latter missing seven of eight shots.

“To be down six and not playing well, we weathered the storm,” said Cooley.

Bouknight’s re-entry provided the Huskies with an expected jolt, yet his 12 points through 20 minutes finished in the runner-up spot to Martin, the first-year Husky who transferred from Rhode Island. Whether it was finishing around the rim or hitting from the outside, Martin was a one-man wrecking machine that left the Friars searching for answers. His 16 points on 7-of-11 shooting (2 of 2 from beyond the arc) was the main reason why UConn led 37-31 at the break.

The first possession of the second half went PC’s way — a steal by Watson that led to a three-ball from Duke. The promise of a competitive affair soon faded as PC missed six straight shots that in turn paved the way for UConn to take its first double-digit lead.

If there was a bright spot for the Friars, it was the play of freshman Alyn Breed. He was one of the few PC players who succeeded in finishing at the rim en route to a team-best 14 points.

PC isn’t back in action until next Wednesday when Xavier comes to Alumni Hall for a 9 p.m. tip. UConn visits Villanova on Saturday for a 1 p.m. game.

RIM RATTLERS: One member of the Friar basketball family was already a winner before he took the court Tuesday night. Taking to his personal Twitter account, Duke announced that over $13,000 was raised to benefit Crossroads Rhode Island as part of a class project. The targeted goal on the GoFundMe page that was created last Thursday was set at $5,000. “I can’t explain how appreciative I am to all of you and your support. Thank you!” said Duke. … Through an initiative launched by The National Association of Basketball Coaches, Cooley and UConn’s Dan Hurley wore commemorative towels as part of a week-long tribute to John Thompson, the former Friar standout and longtime Georgetown head coach who died last August. … Cooley said it was food poisoning that caused him to miss Saturday’s win at DePaul.