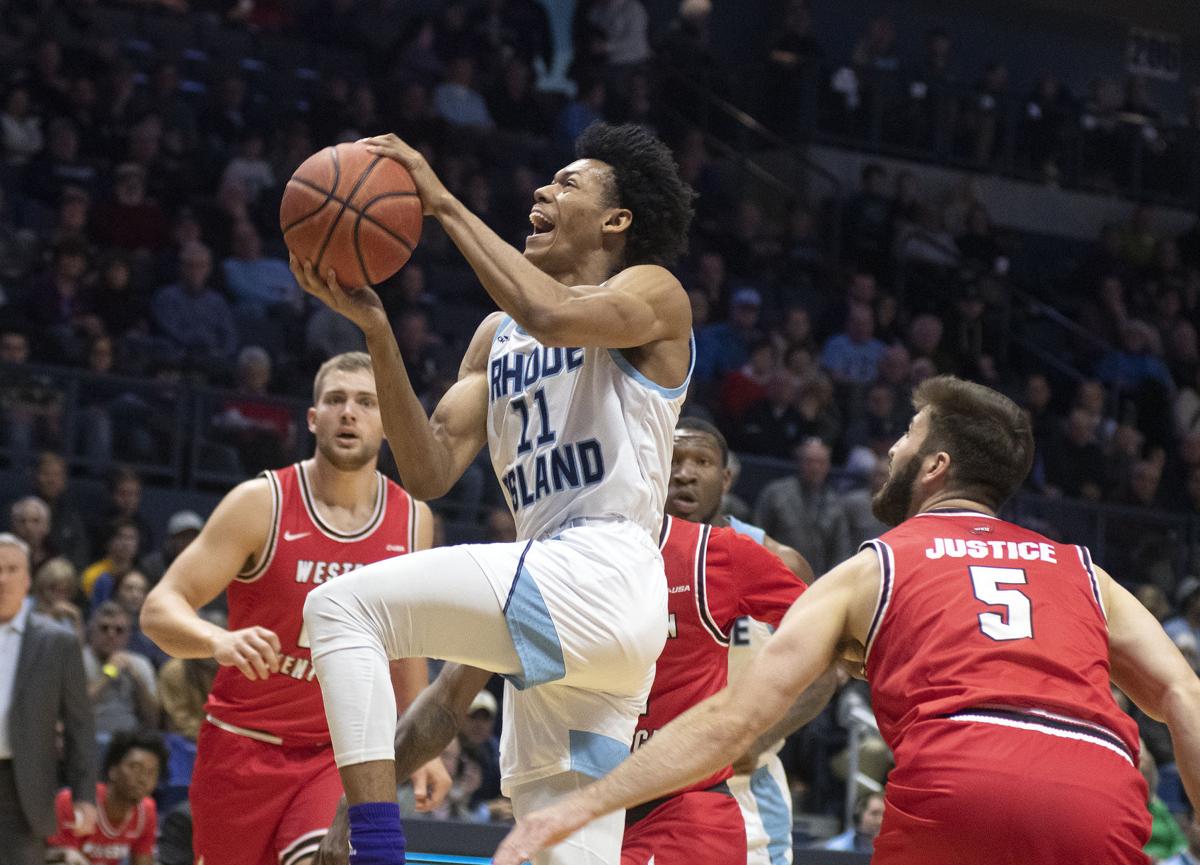 URI's Jeff Dowtin drives to the basket during the first half of Saturday's game against Western Kentucky at The Ryan Center. Photos by Michael Deer 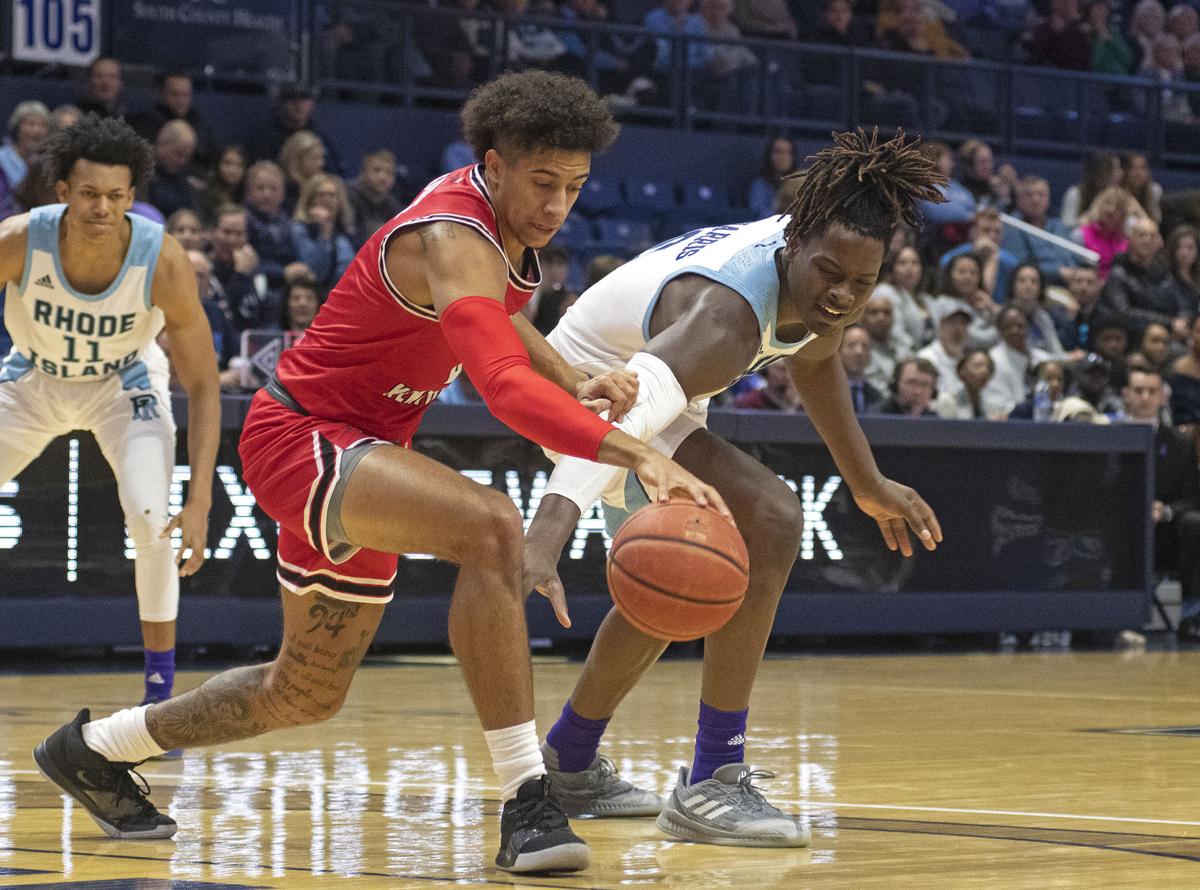 URI's Jermaine Harris, right, battles Western Kentucky's Jared Savage for the ball during the first half of Saturday's game at The Ryan Center. Photos by Michael Deer 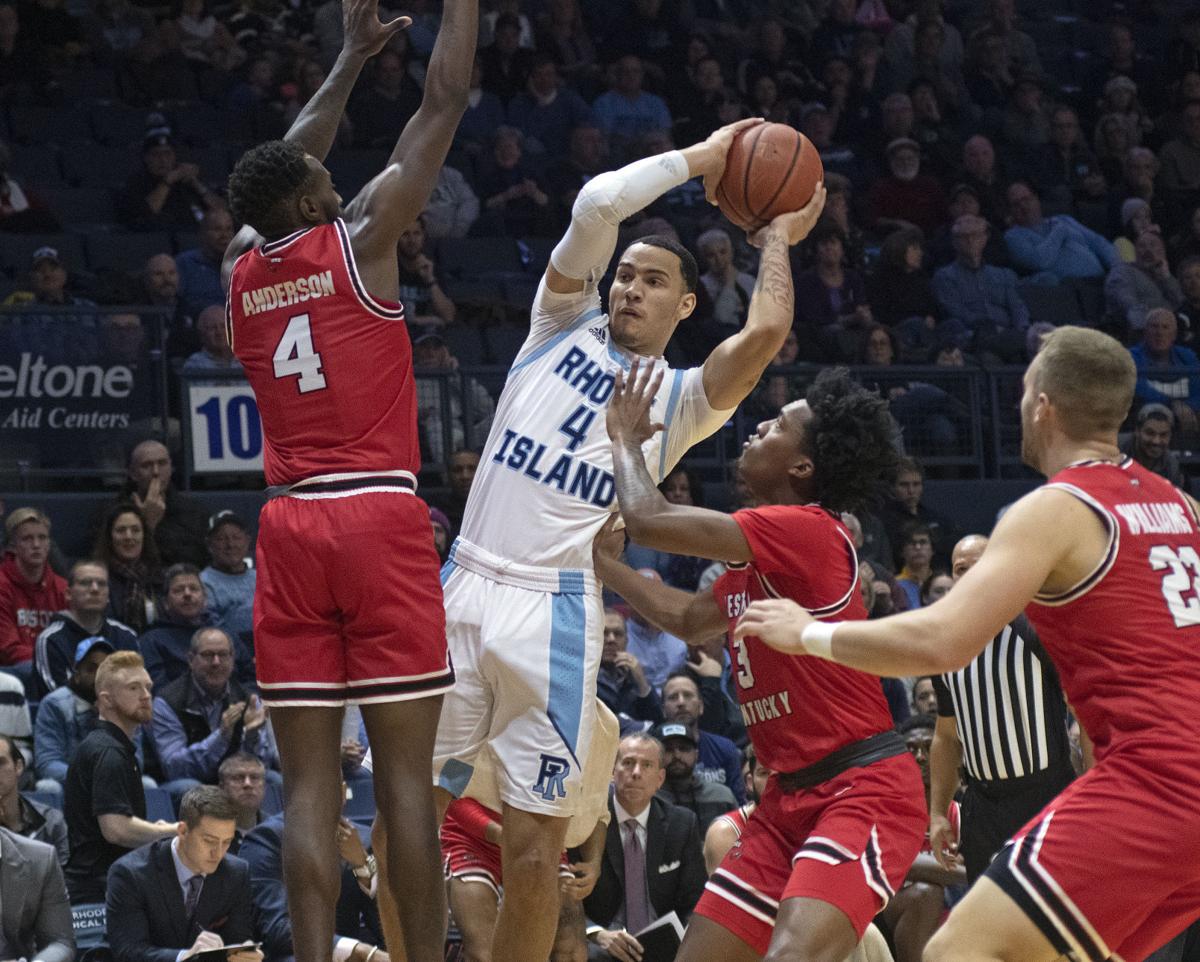 URI's Tyrese Martin drives to the basket during Saturday's game against Western Kentucky at The Ryan Center. Photos by Michael Deer 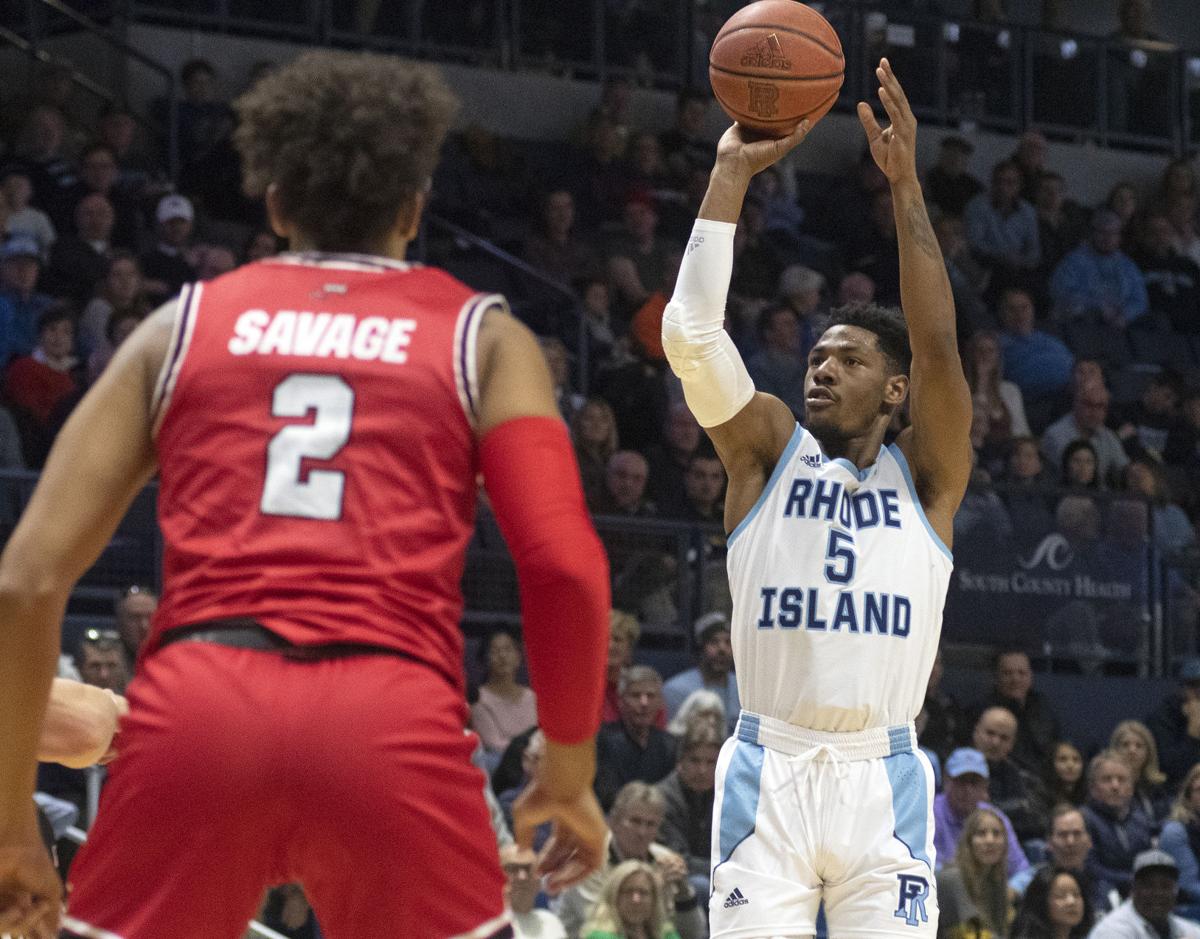 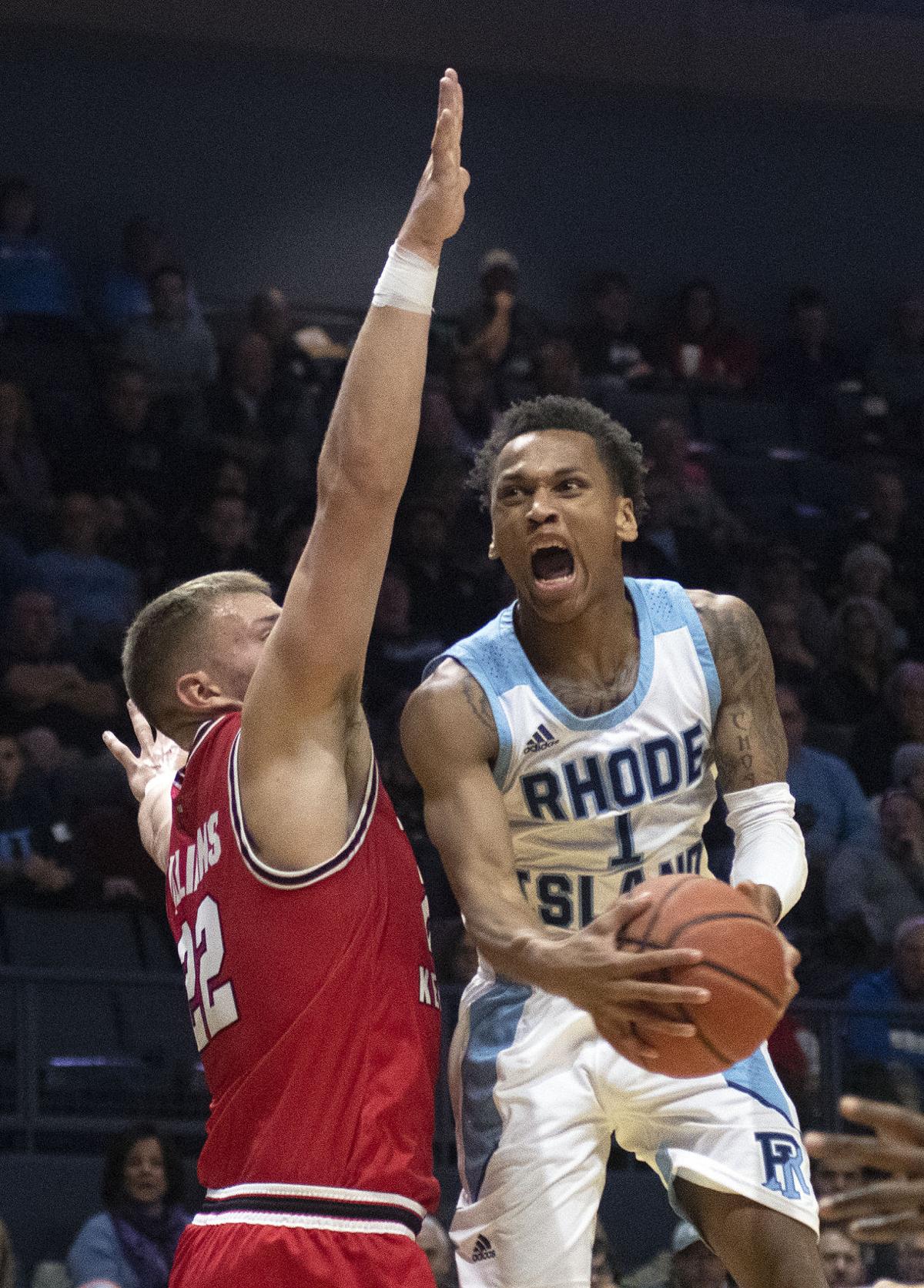 URI's Fatts Russell, right, tries to get around Western Kentucky's Carson Williams during the first half of Saturday's game at The Ryan Center. Photos by Michael Deer

URI's Jeff Dowtin drives to the basket during the first half of Saturday's game against Western Kentucky at The Ryan Center. Photos by Michael Deer

URI's Jermaine Harris, right, battles Western Kentucky's Jared Savage for the ball during the first half of Saturday's game at The Ryan Center. Photos by Michael Deer

URI's Tyrese Martin drives to the basket during Saturday's game against Western Kentucky at The Ryan Center. Photos by Michael Deer

URI's Fatts Russell, right, tries to get around Western Kentucky's Carson Williams during the first half of Saturday's game at The Ryan Center. Photos by Michael Deer

SOUTH KINGSTOWN —The supporting cast brought the University of Rhode Island men’s basketball team to the brink, and the stars arrived just in time to finish the job.

A game that featured season-highs by Tyrese Martin and Jermaine Harris and a strong debut by Georgetown transfer Antwan Walker went sideways in the final minutes as Western Kentucky rallied from a nine-point deficit to force overtime on a buzzer-beating 3-pointer by Carson Williams.

Veterans Jeff Dowtin, Cyril Langevine and Fatts Russell — quiet at least in the scoring column for the previous 40 minutes — scored all of URI’s points in the extra session as the Rams regrouped and survived for an 86-82 victory on Saturday afternoon at the Ryan Center.

“I thought the guys’ composure once Carson Williams hit that shot was very telling,” URI coach David Cox said. “I like to look at the guys in those instances, to see how they respond and react, and I thought their initial response was fine — just, ‘OK, we’ve got to go a little longer, but we’re going to get this done.’

Back on the court after a 15-day break, the Rams seemed in control for most of the night, leading for all but 2:15. But after a 3-pointer by Martin with 4:47 remaining made it 70-61, they went scoreless for nearly four minutes. Buckets by Dowtin and Russell kept URI in front, but a wild last possession ended in the buzzer-beater.

The Hilltoppers missed a contested 3-pointer, grabbed the rebound and missed another, before corralling a loose ball and finding Williams all alone in the left corner.

“The ball was just bouncing around, took a couple of bad bounces,” Cox said. “We were scrambling and scrambling and it found that guy in the corner. He knocked down a big shot.”

Langevine had four points at the start of overtime, but scored URI’s first bucket off a pass from Russell. With 3:19 left, Russell buried a 3-pointer after an 0-for-5 start from deep. Langevine drove for a bucket that made it 81-79 and the Rams came up with three straight defensive stops, two thanks to steals by Harris.

Dowtin and Russell sealed the victory at the free-throw line, with Russell’s two foul shots at 21 seconds bumping a three-point lead to five. They came after Harris kept an offensive rebound alive. After a 3-pointer by Jared Savage, Russell made two more free throws with 14 seconds left.

“I thought we locked in when we needed to lock in, which was in the overtime period, on the defensive end and defensive rebounding,” Cox said. “And then some timely plays. Jermaine Harris had a couple of big steals and deflections and a huge tip out at the end of the game. It took a complete team effort. Very happy and satisfied with the victory.”

URI’s leaders were content to contribute in other ways before their takeover. Dowtin and Russell were a combined 8-of-33 from the field, but each of them totaled eight assists. Langevine had 14 rebounds.

It was a good sign for the Rams that they could stay afloat without scoring punch from those three. Martin broke out for his highest scoring night since a career-high 23 last season against Massachusetts. Fifteen of his 22 points came in the first half.

“I saw some shots go in early, so I just kept on shooting it,” Martin said.

Walker, a mid-year transfer last year who had to sit out the first semester, had 10 points and seven rebounds in his first game as a Ram.

“I think after he got his legs underneath him and saw that ball go in for the first time, he was right back to playing basketball,” Cox said. “He’s been around this program now for over a year. We know what he’s capable of doing and he did that. He gave you all a glimpse of that tonight.”

Russell saw his streak of 20-point games end at seven as he went 4-of-18 from the field. If there was a question of how the Rams would play without Russell starring, the answer was in line with what they hoped.

“Fatts, 20 points in seven straight games, he can’t do that for the rest of the season and nor should we have to rely on him to do that,” Cox said. “We’ve got an outstanding group around him, talented players, and they all stepped up tonight. Jeff with the 14 and eight assists, no turnovers. Tyrese with 22 points. Antwan chipping in with 10. Great team effort tonight.”

Now 7-3 on the year, URI hits the road for its final two non-conference games, though one will be an easy trip. The Rams head to Middle Tennessee Dec. 29 before visiting Brown Jan. 2.

A Decade in the Making: Lost granite globe returns to Stonington Cemetery entrance

$31M being poured into affordable housing in Rhode Island; Hopkinton, Charlestown among recipients