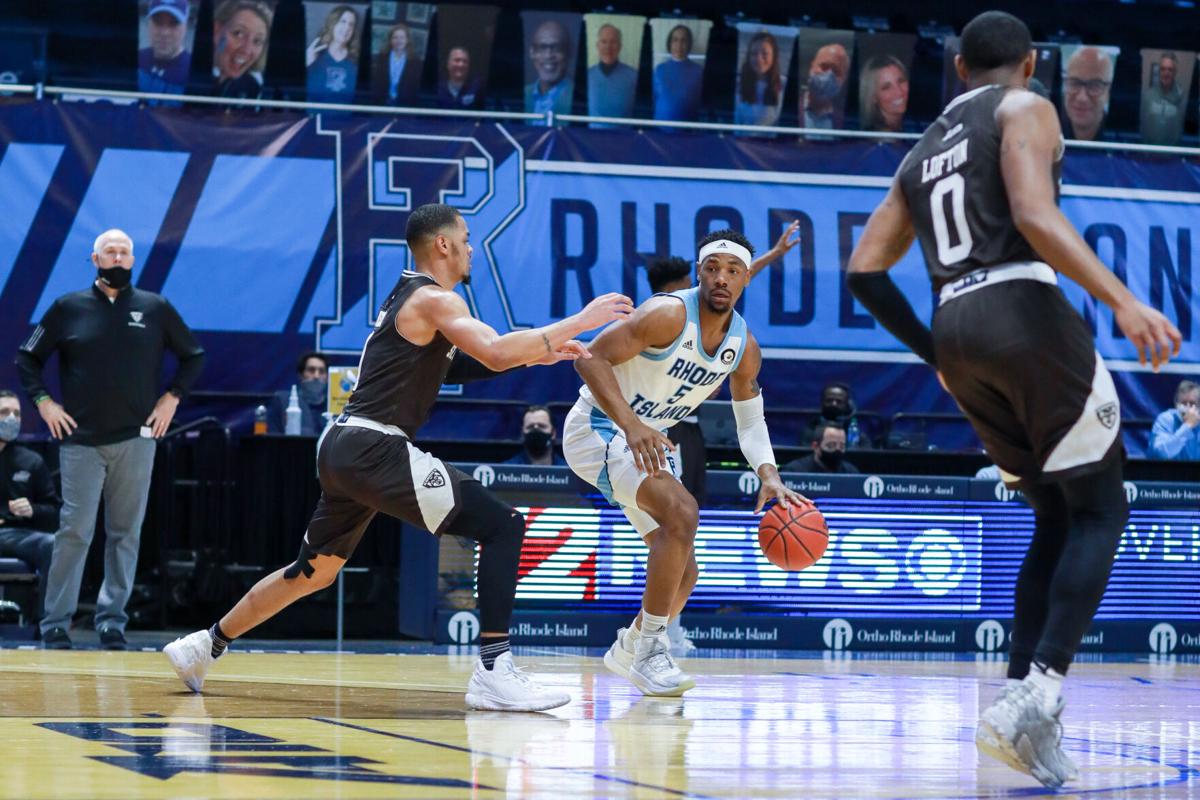 URI’s Antwan Walker looks for an opening in the St. Bonaventure defense during an Atlantic-10 Conference game Wednesday at the Ryan Center. Walker had 11 points and 10 rebounds in the Rams’ 63-57 win. | Drew Adames, Rhode Island Athletics 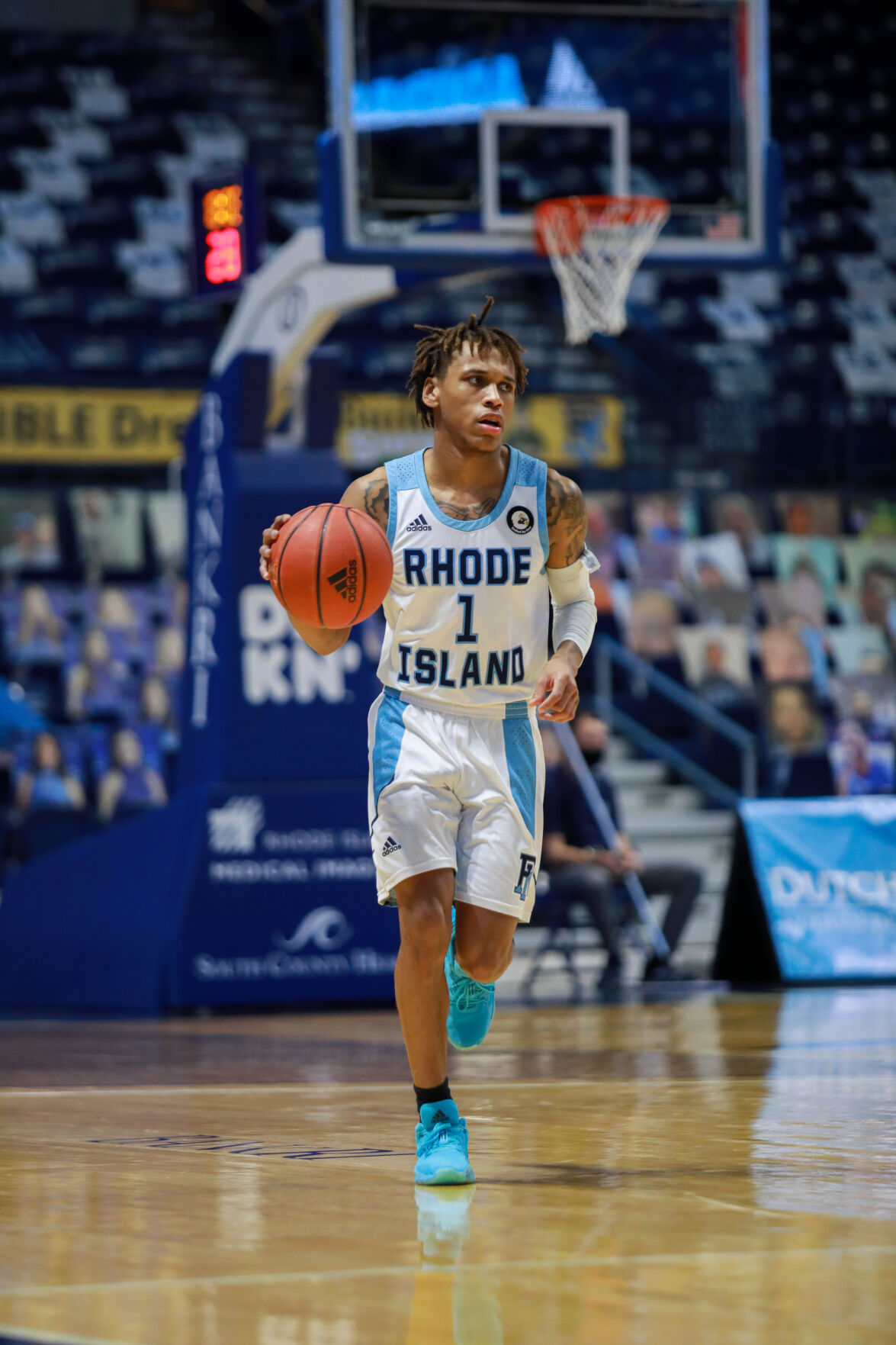 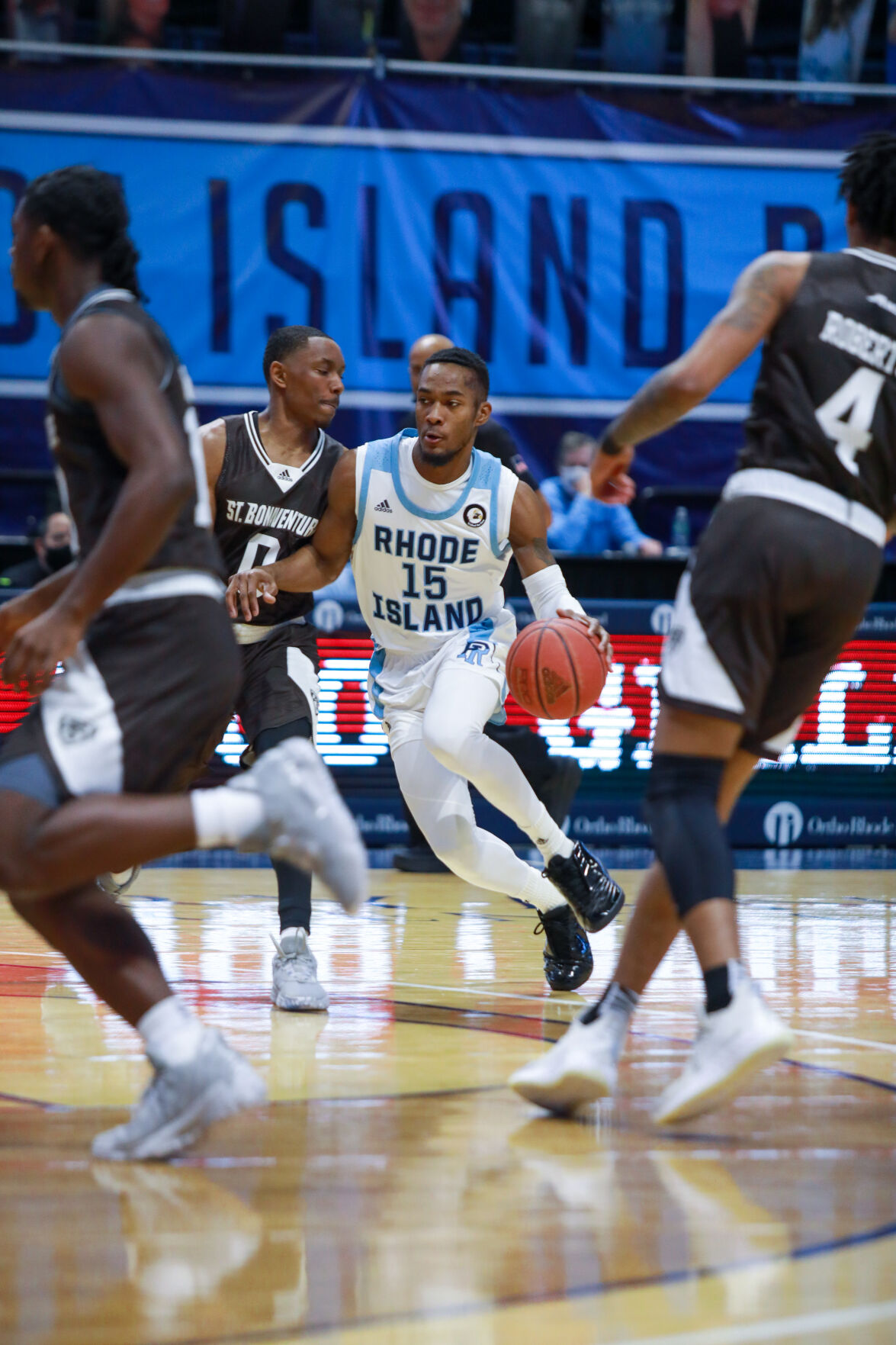 URI’s Jalen Carey drives to the basket during the Rams' 63-57 victory over St. Bonaventure on Wednesday at the Ryan Center. | Drew Adames, Rhode Island Athletics 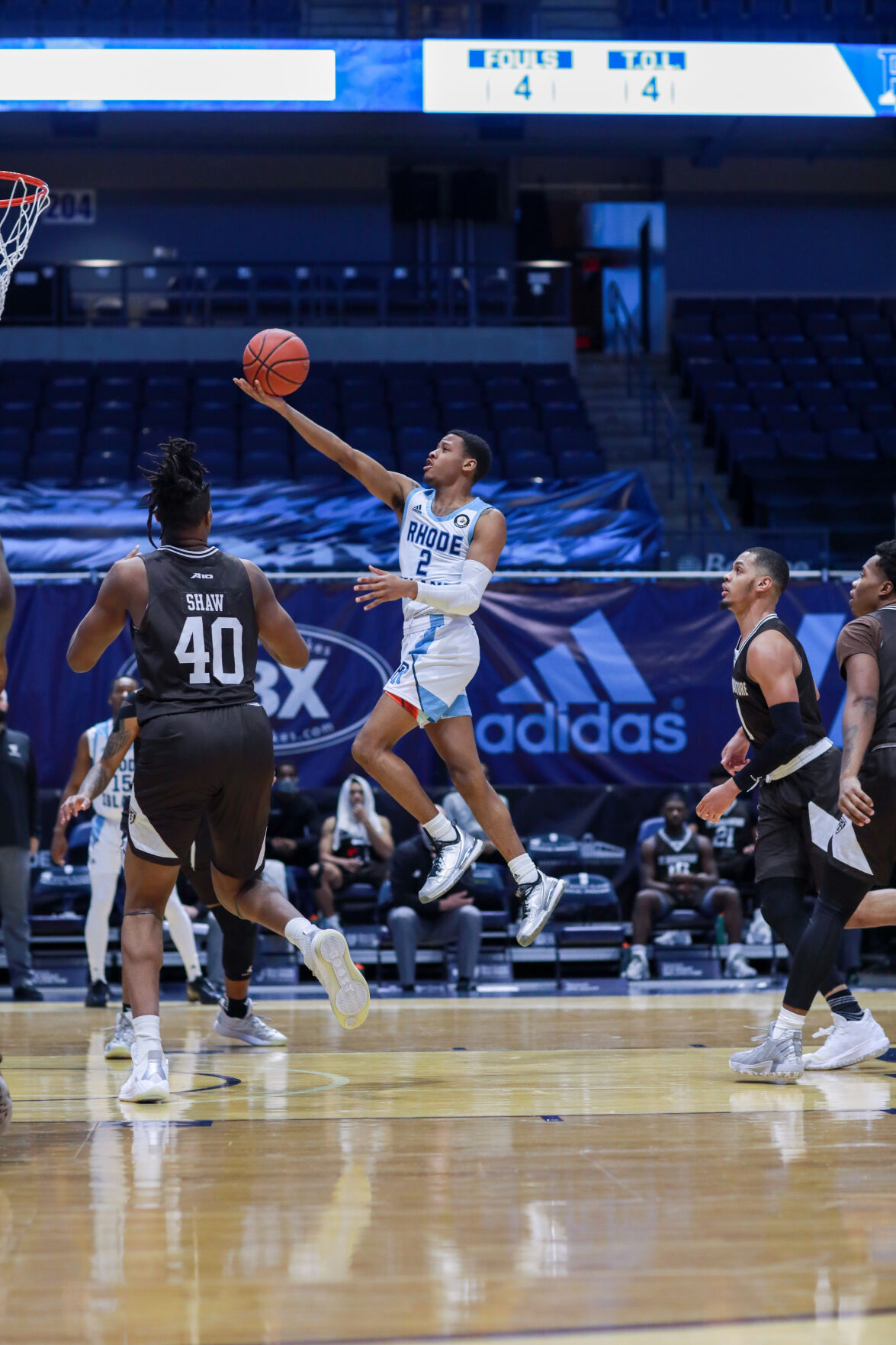 URI’s Antwan Walker looks for an opening in the St. Bonaventure defense during an Atlantic-10 Conference game Wednesday at the Ryan Center. Walker had 11 points and 10 rebounds in the Rams’ 63-57 win. | Drew Adames, Rhode Island Athletics

URI’s Jalen Carey drives to the basket during the Rams' 63-57 victory over St. Bonaventure on Wednesday at the Ryan Center. | Drew Adames, Rhode Island Athletics

Antwan Walker pulled down an offensive rebound and went back up with it. His putback was off the mark, but teammate Malik Martin grabbed the miss. When his own follow got blocked, Martin scratched for another rebound. Walker then went to the floor to trigger a jump ball after a missed 3-pointer. Finally, 36 seconds after the possession began, Jermaine Harris spun on the baseline and slammed home a dunk.

The four-rebound trip gave the University of Rhode Island men’s basketball a lead early in the second half of Wednesday’s game, but more important, it helped establish an identity for the Rams in a grind-it-out affair. They never stopped scrapping, shaking off a host of turnovers and stretches of inconsistency to beat St. Bonaventure 63-57 at the Ryan Center.

“We obviously talked to the guys about crashing the glass and having a motor tonight,” URI coach David Cox said. “I thought they did have a motor for the majority of the game and that was a prime example.”

The win snaps a three-game slide and evens URI’s Atlantic-10 record at 1-1. After a loss to Davidson in their league opener, the Rams had 12 days to regroup. The return did not bring many improvements in efficiency. The Rams committed 24 turnovers, more than in any game in their last 10 seasons, shot 25% from 3-point range and made only 60% at the free-throw line.

But they also shot 48%t overall while limiting the Bonnies to 39%t and forcing 20 turnovers from that side. All of it — and their ability to battle through —- was enough.

“We didn’t play our best ball. Twenty-four turnovers is too many. We shot 60% from the free-throw line. We’ve got to clean up a lot of things,” Cox said. “But what I’ll take from this game is that we didn’t play our best at all today and we still came out with the victory. I think that shows that we have the talent and we have a high ceiling. But we’ve got to get to work.”

The Rams overcame 13 first-half turnovers to finish a grinding first 20 minutes down by just two points. The Bonnies had taken a 14-8 lead early before the Rams steadily worked their way back in. A Fatts Russell 3-pointer pulled Rhody even with 7:32 left. A 6-0 run powered by Russell free throws and buckets inside by Harris and Walker gave URI a 24-20 edge. Kyle Lofton’s five straight points provided an answer for the Bonnies. He later broke a 27-27 tie on a driving layup at the halftime buzzer.

The opening minutes of the second half represented one of the best stretches of the season for the Rams at both ends. They scored the first 13 points of the half on two 3-pointers by Jeremy Sheppard, a three-point play by Martin, a bucket inside by Makhel Mitchell and the fifth-chance dunk by Harris. Sheppard’s 3-pointer with 14:55 left put URI on top 40-29.

With positive trends difficult to sustain for both teams all night, the lead didn’t last. The Bonnies came back with a 13-2 run to tie the game at 42.

After a back-and-forth stretch, URI began to take control when Fatts Russell set up Mitchell for a dunk and Walker drilled a 3-pointer, making it 52-47. St. Bonaventure star big man Osun Osunniyi fouled out with 3:47 left, further opening the path for the Rams. A couple of stops and better free-throw shooting down the stretch allowed URI to finish off the win.

“We had talked about that for the past week or so,” Cox said. “In any game, there’s going to be adversity. It can happen at the beginning, the middle or the end. It just so happened for us at the end of the half and toward the end of the game. I thought our guys were in a really good place today. They were communicating in a positive manner, they were supporting one another, they were really connected tonight and I think that made all the difference.”

Sheppard finished with a game-high 17 points on the heels of a scoreless showing in the loss to Davidson. Walker logged his second double-double of the season with 11 points and 10 rebounds. Harris was two points away from joining him, finishing with eight points and 10 rebounds. Russell’s recent bumpy road amid a heel injury continued as he shot 2 of 9 and lost six turnovers, but he also handed out five assists and finished with nine points.

Picked just ahead of URI in the A-10 preseason poll, the Bonnies came in with only two games under their belt due to COVID-19 issues. Their usual offensive prowess was missing as URI played some of its best defense of the season.

"I thought we were locked in," Cox said. "I’ve got to give [assistant coach] Austin Carroll a lot of credit. He had a great scout, so we were really well prepared for this. It enabled us to come up with a really good game plan."

The Rams are hoping the win — if not the performance — is a sign of things to come. Last season, they lost their A-10 opener, then reeled off 10 consecutive victories. To do something similar now, the Rams will need big improvements, but they were glad to take a first step.

“It just means we’ve got to keep pushing and keep everybody on the same page,” Walker said. “Hopefully, we can get the train rolling.”

“You’ll take any win. Shoot, it’s been three and a half, almost four weeks since I’ve been able to smile,” Cox said. “We’ll take the win, but there was an ugliness to it. If we’re just happy and content with this, we’re in trouble. If we have aspirations of turning this thing around and having a fantastic conference regular season, maybe making a run postseason, we’ve got to tighten up a lot of things.”

A Decade in the Making: Lost granite globe returns to Stonington Cemetery entrance

$31M being poured into affordable housing in Rhode Island; Hopkinton, Charlestown among recipients