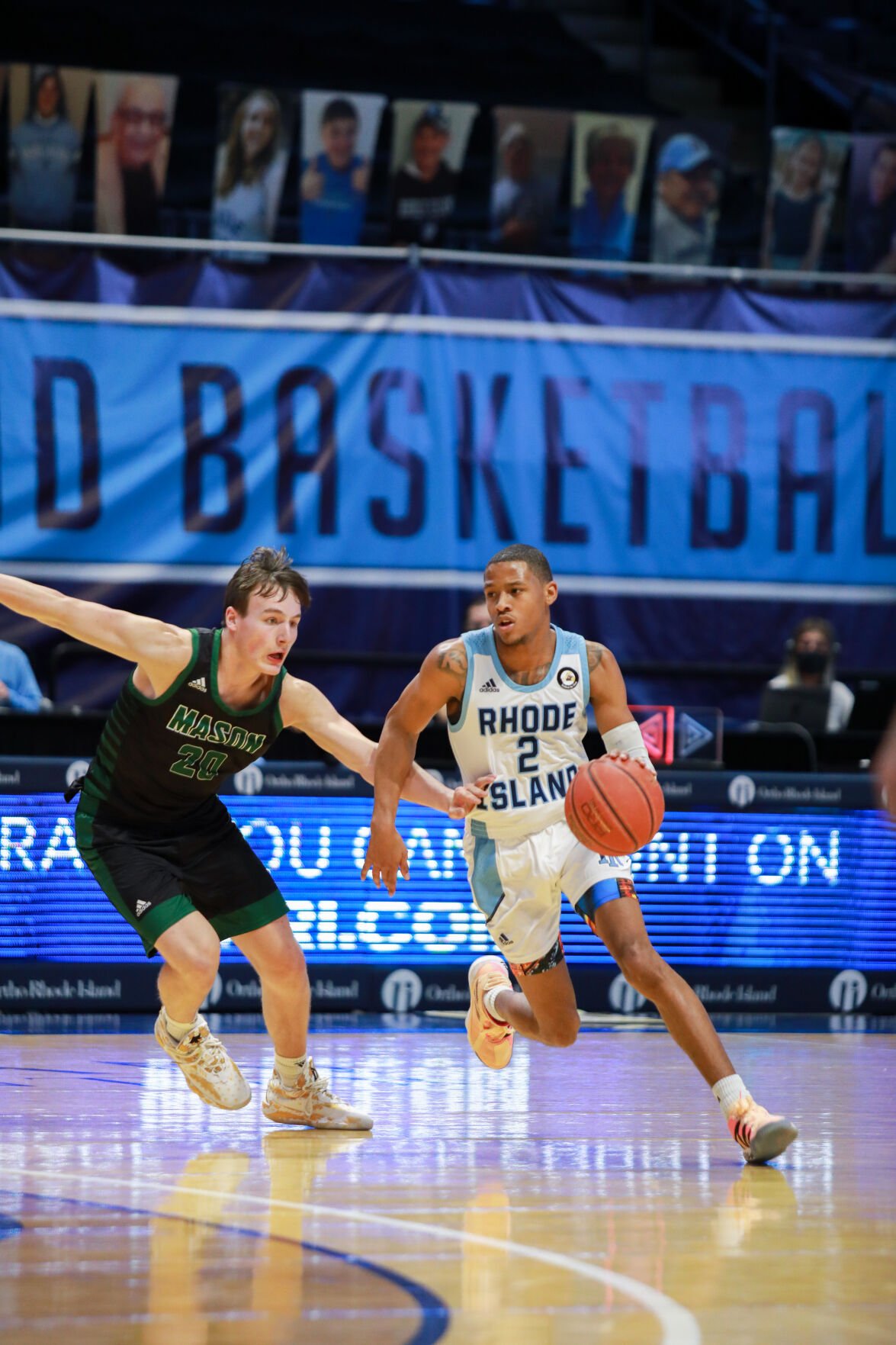 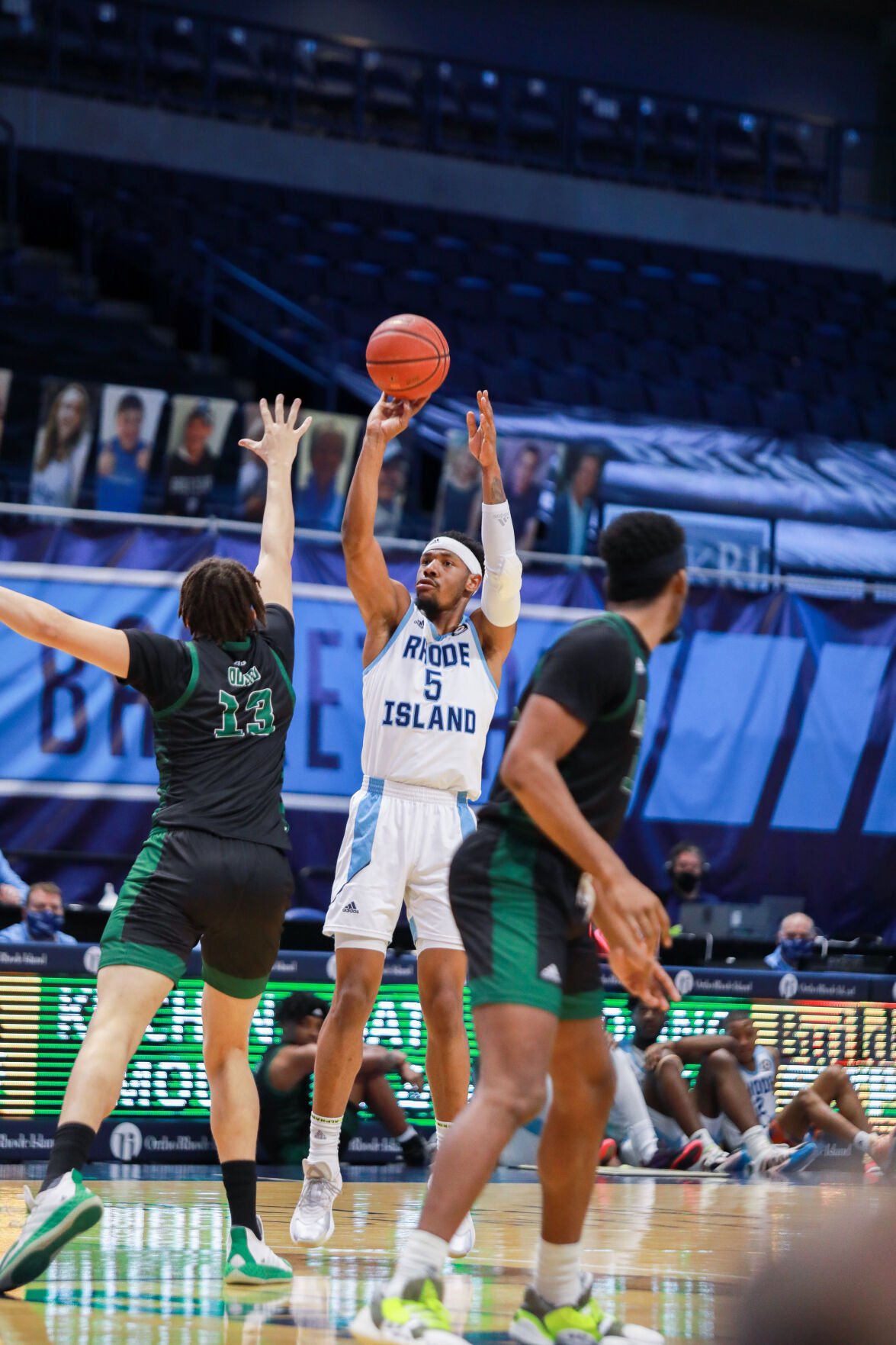 SOUTH KINGSTOWN — Through the first six minutes of Saturday’s game, the University of Rhode Island men’s basketball team took only three shots from the field.

The turnover problems that have been plaguing the Rams were front and center as George Mason raced to a 13-4 lead.

When the shots started going up, good things happened.

The Rams finished with their lowest turnover total since the Atlantic 10 opener, shot 53% from the field and outscored the Patriots by 20 points in the second half en route to an 80-60 victory at the Ryan Center.

“We’ve got a lot of firepower. It’s a shame we give up so many opportunities by not even getting the shot off because we’re turning the ball over,” URI coach David Cox said. “And when you think of the turnovers that lead to points, not only are we not getting the shot off, we’re giving up a basket at the other end as well. That’s a big difference — that’s sometimes a two-, four- or five-point turnaround. I hope the guys were able to see what we’re capable of when we take care of the ball.”

The Rams came into the game ranked 282nd in the country in turnovers per game. On the flip side, they’ve been shooting the ball well, making the giveaways all the more frustrating.

The opening minutes looked like more of the same. Two of URI’s first three possessions ended with turnovers. They had two more that led to buckets at the other end as George Mason jumped to the nine-point cushion. The Patriots also capitalized at the 3-point line, making five of their first seven shots from deep.

The first positive signs for the Rams came in an 8-0 run midway through the half. Later a 10-0 run gave them their first lead, with an Ishmael Leggett free throw pushing them over the top.

“I thought our bench particularly gave us a huge boost in the first half when we were trailing,” Cox said.

That was but a hint of what came next.

From a 34-34 halftime tie, the Rams outscored George Mason by 20 in the second half. They committed only three turnovers after the break and finished with 12, their lowest total since they had 11 against Davidson on Dec. 18.

“That’s the difficult thing with this team,” senior Fatts Russell said. “We have a lot of talented guards. We all can go create our own play and be playmakers. But sometimes we do too much, try to make the spectacular play instead of the correct play. We went into practice and talked about it all week, and we fixed it.”

Antwan Walker scored seven of his team’s first 11 points in the second half as the Rams went up 45-40. The lead held steady past the 10-minute mark before an 11-0 run sealed the victory. Jeremy Sheppard and Russell drilled 3-pointers for the exclamation points. George Mason, which came in at 2-3 in A-10 play, never recaptured its hot shooting start, finishing at 33% from the field, which matched a season-low among URI opponents.

“I think there was a lot more focus and urgency in the second half,” Cox said. “We didn’t start with a tremendous amount of focus or urgency. That’s why we had the deficit. It was a mindset difference in the second half. We played the same guys. We played the same style. They made up their minds that they were going to be locked into the game plan, they were going to be locked into taking care of the ball and executing at a high level at the offensive end, sharing it, and concentrating on free throws. It was a mindset change that I think came about from our players.”

Russell led the Rams with 18 points, shooting a season-best 50% from the field and hitting three of his five 3-point attempts. Makhel Mitchell followed up a career game at UMass with a 14-point, 10-rebound double-double. Walker was two points off a career-high with 17 and added nine rebounds.

Russell added two steals, making him just the third player in program history to tally 200 for his career. He is six away from passing Tyson Wheeler for second place on the all-time list and eight from taking over the top spot from Keith Cothran.

Cumberland native Tyler Kolek had 13 points for George Mason in his Ocean State homecoming. The Patriots’ Jordan Miller led all scorers with 22.

The Rams are back above the .500 mark at 4-3 in Atlantic 10 play and they’re sitting at 7-7 overall. Next up is a trip to Duquesne with what URI hopes is a blueprint.

“I’ve tried negative reinforcement the last couple of weeks —making them watch all the turnovers and what it’s led to,” Cox said. “Maybe now, I can switch to some positive reinforcement — show them on film what it looks when we play the right way and take care of the ball.”