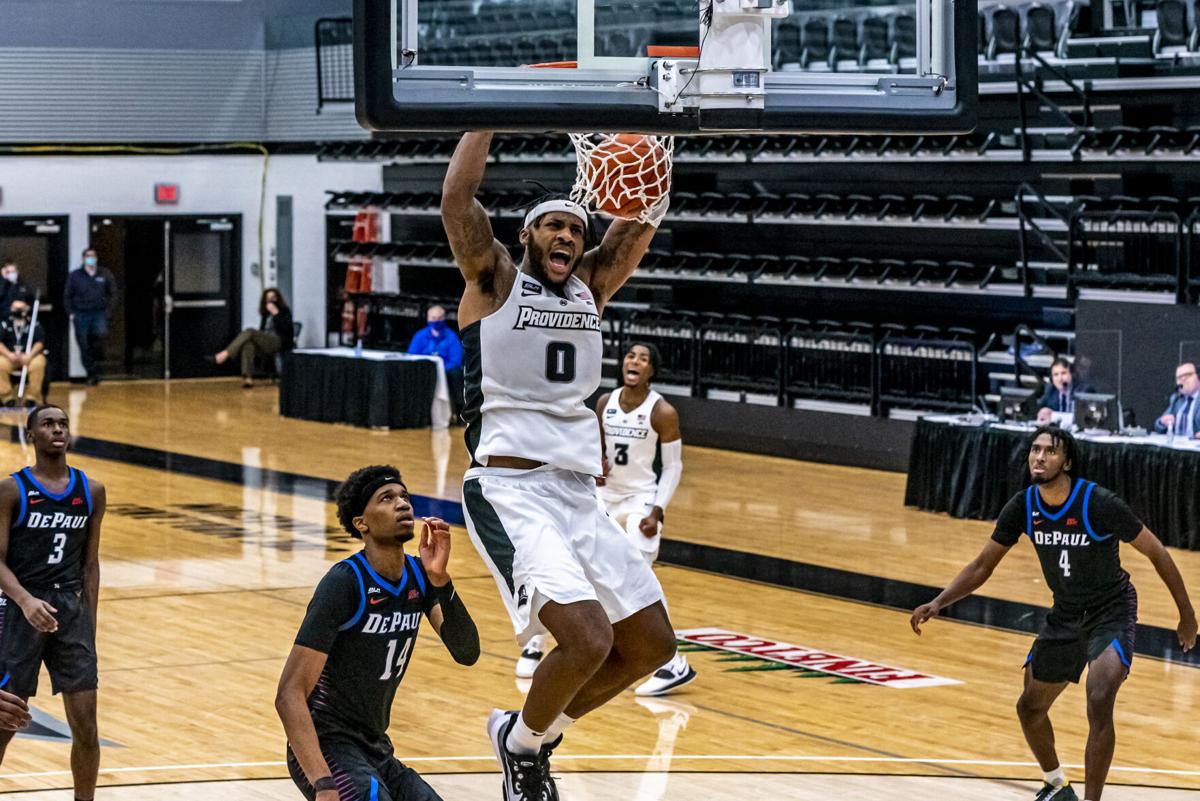 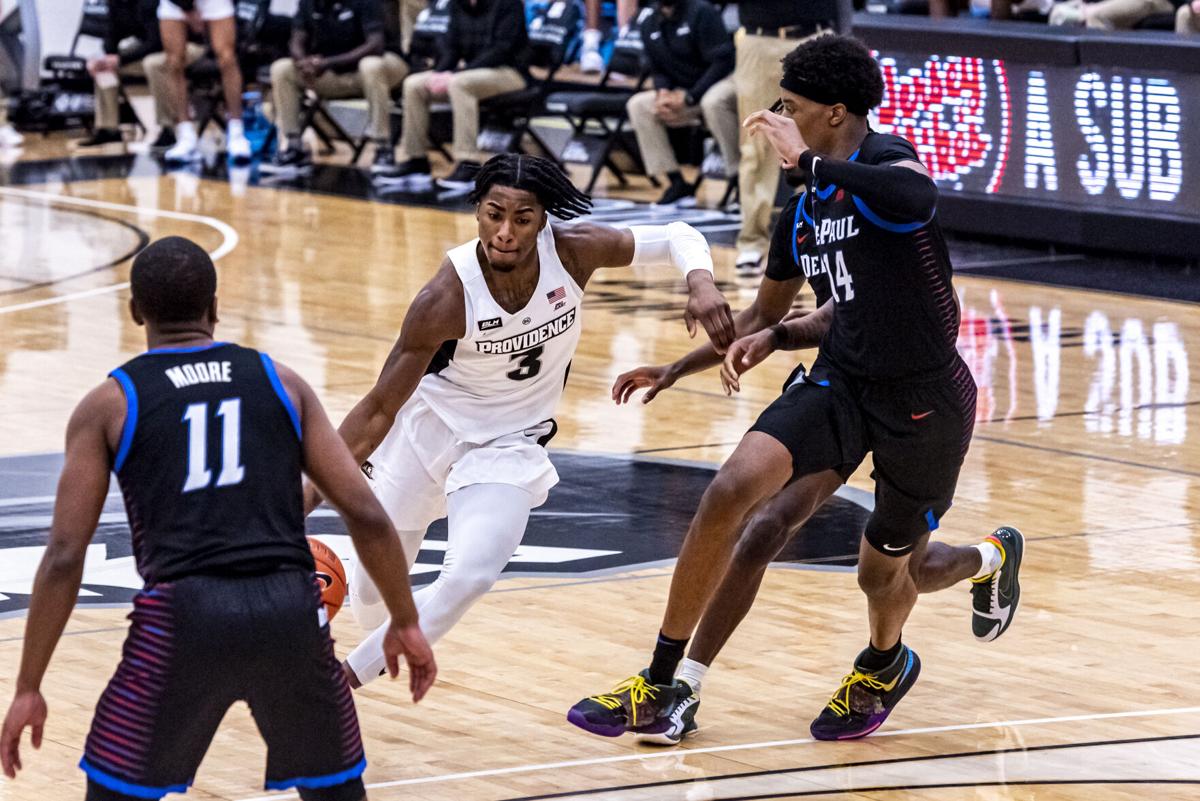 Providence guard David Duke drives to the basket in the first half against DePaul on Sunday. | Ryan Feeney, PC athletics 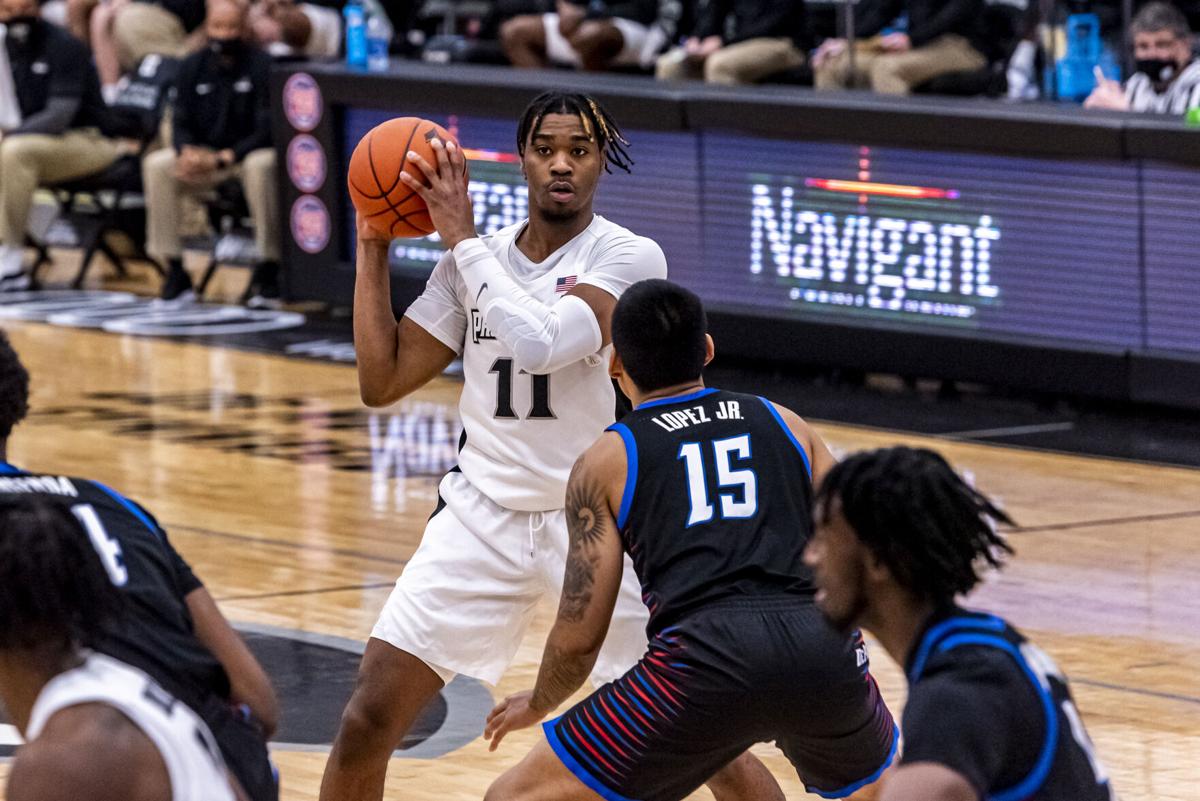 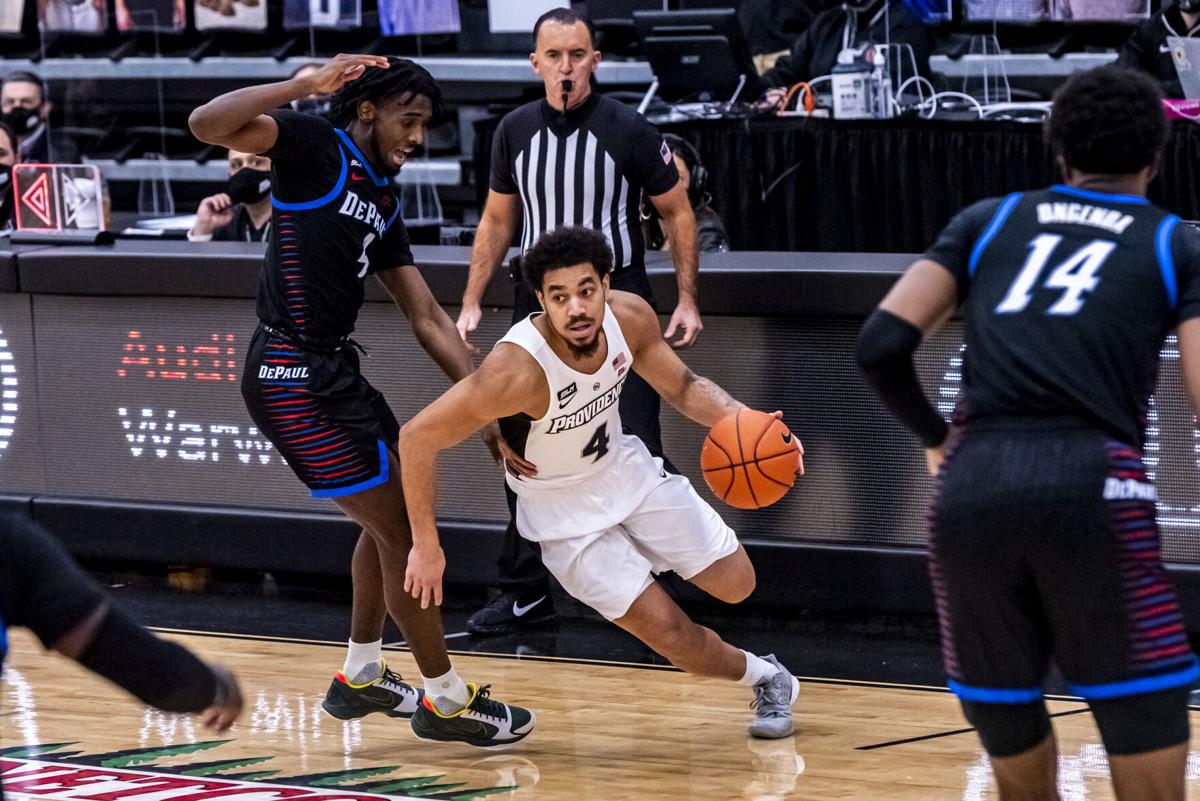 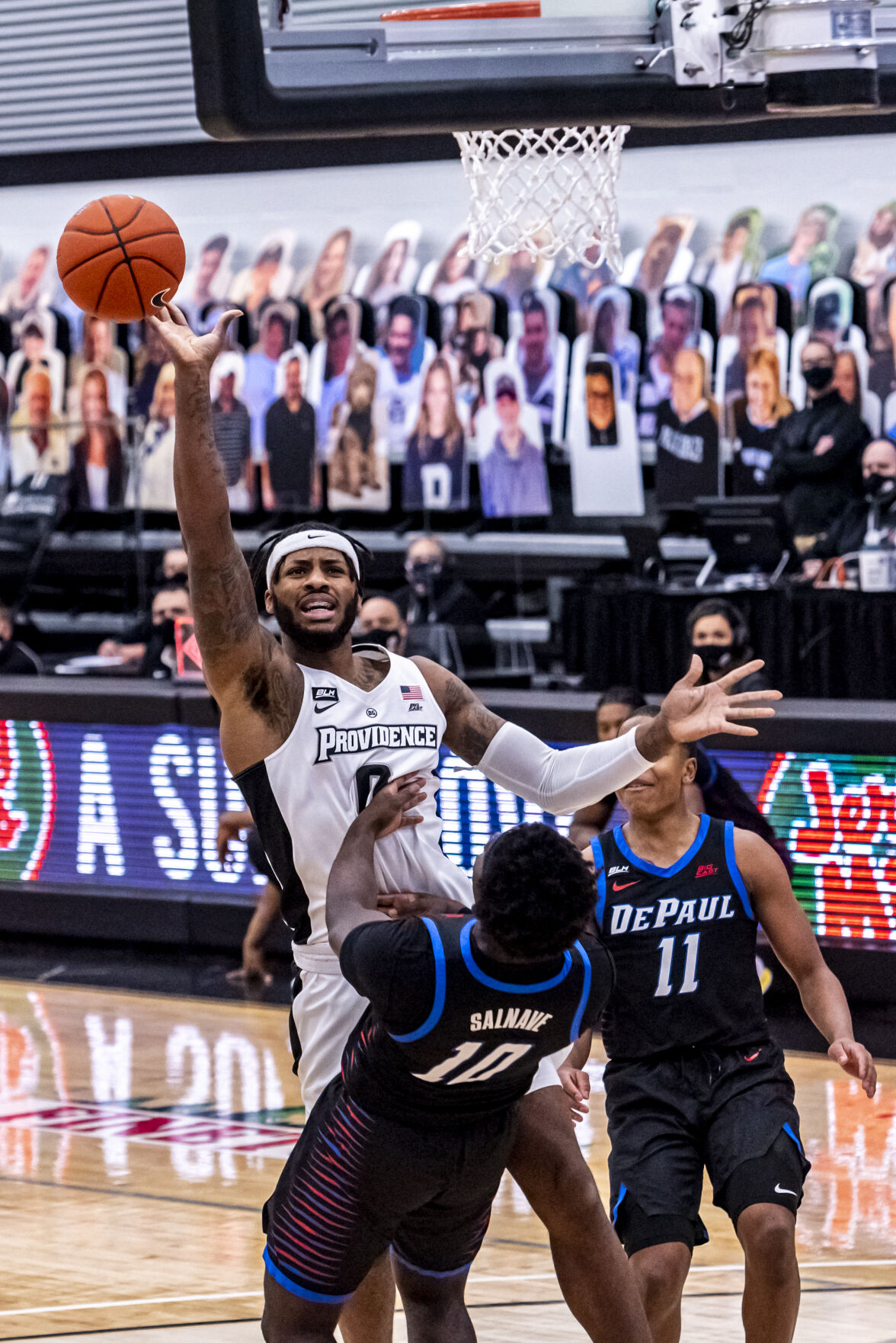 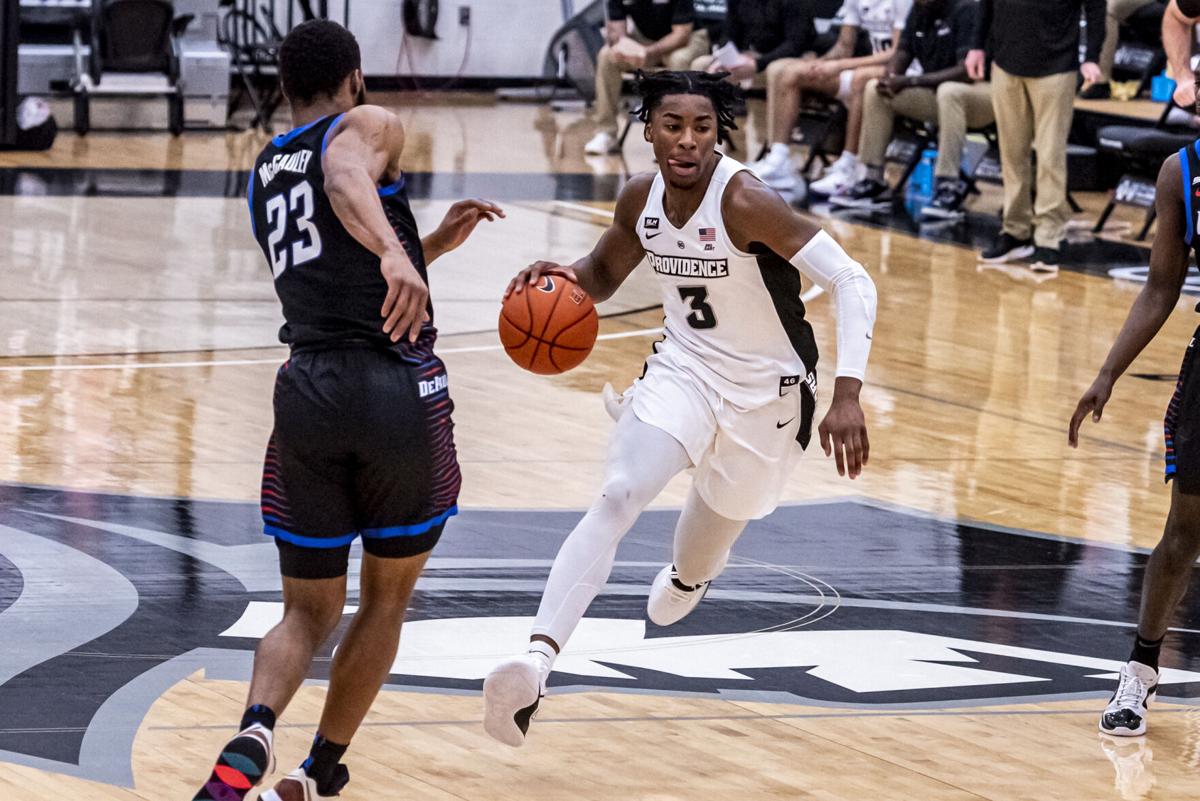 Providence guard David Duke drives to the basket in the first half against DePaul on Sunday. | Ryan Feeney, PC athletics

A.J. Reeves, the king of clutch, came through once again for the Providence College men's basketball team.

PC needed a 3-pointer to force overtime against a plucky DePaul squad and Reeves stepped to the forefront. The junior rose from the right wing and buried a 3 with five seconds remaining that provided the Friars with a chance to right the ship inside Alumni Hall.

In the end, Providence needed two overtime sessions before finally putting DePaul down for good in Sunday’s 95-90 final.

To start a three-game homestand with a loss to a Big East school that’s still shaking off the COVID cobwebs would have been a tough blow. For the second straight Sunday, Ed Cooley’s crew managed to show plenty of resilience with additional time needed to settle the issue.

“As a coach, you need to believe in your players,” Cooley said. “Once again, A.J. stepped up in a critical situation and delivered. He’s someone we look to with the game on the line.”

Reeves will justifiably earn praise for his latest addition to his ever-growing collection of big-shot moments. What shouldn’t be forgotten is the mark he made on the defensive end — particularly in the first overtime.

Reeves came up with a steal that triggered a go-ahead layup by David Duke with 1:03 left. The game was tied at 83 when DePaul’s Charlie Moore appeared to have plenty of daylight on his way to netting what would have been a game-winning layup as time wound down in the first extra session. Reeves stepped in and came up with the timely strip to send the game to a second OT.

“I was like, ‘Wow, the Red Sea is parting,’ but that’s where length comes in,” Cooley said when asked about Moore’s bid that was ultimately snuffed out by Reeves.

After last week’s lackluster showing at Butler, Cooley noted that made 3e-pointers have a way of galvanizing a team, particularly on the defensive end. Reeves followed Sunday’s late-game heroics by splashing in a 3 for the first points of the overtime. Then, defense became his calling card as part of a 22-point, five-rebound, three-steal performance.

That said, Reeves will be ready to pounce if teams are going to continue to give him clean looks with the outcome hanging in the balance. Right before his game-tying make, Reeves switched spots on the floor with Duke.

“We’ve been watching a lot of film to find where guys usually deliver. I’m pretty comfortable along that right wing,” Reeves said. “I don’t want to say too much because I don’t want teams cracking down when it’s crunch time.”

Duke led PC (6-2, 2-1 Big East) with 24 points along with six assists and five rebounds while Nate Watson fought his way through one bruising double team after another to collect 18 points and 14 rebounds. There were times when Watson appeared to be noticeably agitated with how he was being defended. Such is life when you’re a scoring big man on a team that continues to struggle with its touch from outside.

Playing in just its second game of the season, DePaul appeared on the verge of pulling off an upset of PC on several occasions before running out of steam in the second overtime. Romeo Weems buried five 3s to lead the Blue Demons with 21 points while Moore finished with 19 points.

The Friars had multiple chances to put away the visitors, but DePaul simply refused to go away. PC’s biggest lead in the first half was eight points before the home team pulled into the halftime break up 34-29.

Back-to-back sequences that resulted in offensive fouls on the Friars were part of the recipe that fueled a 9-0 run for the Blue Demons, who led 55-52 with 9:05 remaining in regulation. PC succeeded in erasing a 62-58 deficit before DePaul’s Kobe Elvis netted a layup that tied the game at 64-64 with 3:58 remaining.

Both teams caught fire coming out of the timeout as Reeves netted all five of PC’s points to keep the stalemate intact, this time at 69-69 with 1:57 left. DePaul went up 74-71 after two makes at the line from Moore with 16 seconds left, but that’s when Reeves stepped up to the plate and delivered.

The separation that PC spent all game searching for didn’t come until the second overtime when Jared Bynum executed a pick-and-roll sequence that resulted in an easy slam dunk by Watson that put PC up 93-88 with 51 seconds left.

DePaul went from shooting 60% in the second half to 57% in the first overtime to 33% in the second overtime. PC continues to struggle from beyond the arc (6 of 23) but managed to make 31 trips to the foul line compared to eight for the Blue Demons.

“(Defensively) we're still a work in progress. We just happened to turn it up in that second overtime,” said Cooley.

The Friars will be back in action Wednesday at home against a Butler team that will be looking for a season sweep of PC.

Cooley agreed when asked if Noah Horchler turned in his best game in a Friar uniform (10 points, seven rebounds). “We’re going need more from him as he continues to get comfortable playing in the Big East.” … Sunday marked the Friars' first win in double overtime since January 16, 2014, when Providence earned a win in 50 minutes of action at St. John's. PC lost a double-OT game at Georgetown in Jan. 2019. … Duke played 49 of the 50 minutes.

PHOTOS: Perched by the docks at sunset in Stonington Borough

At the Library: A unique date night, courtesy of the library