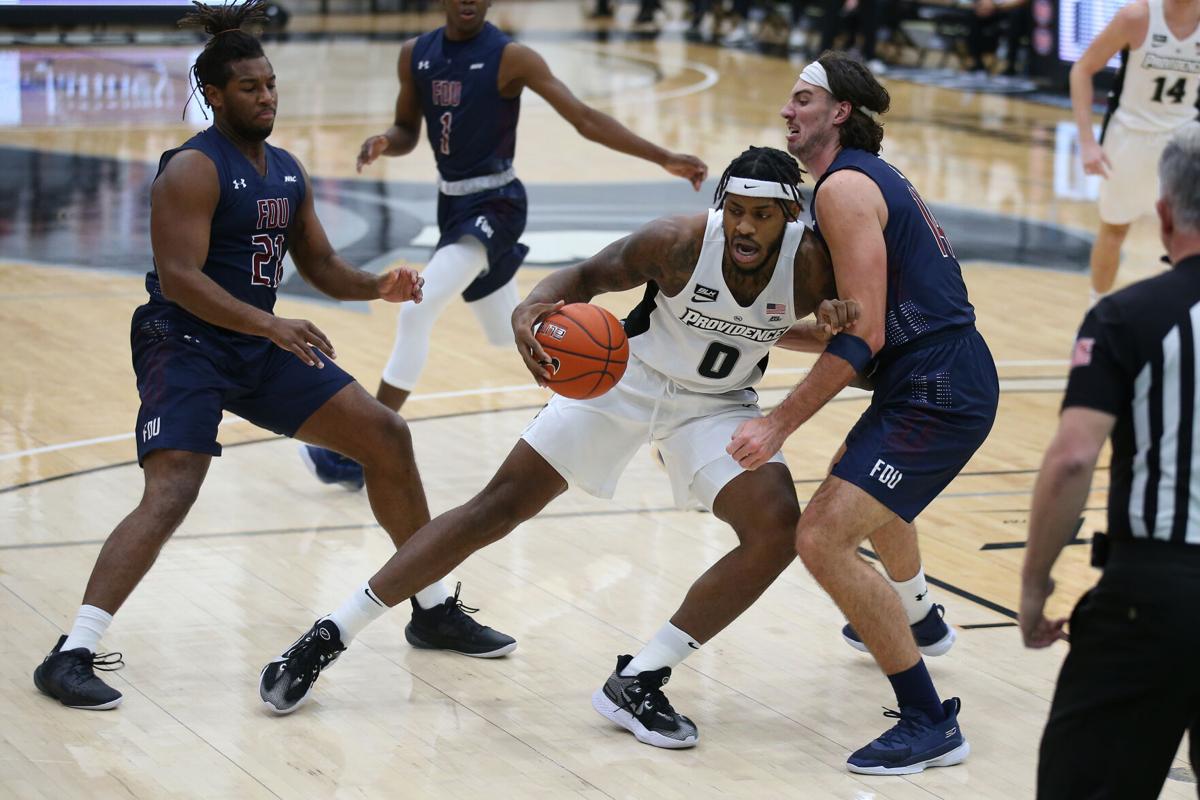 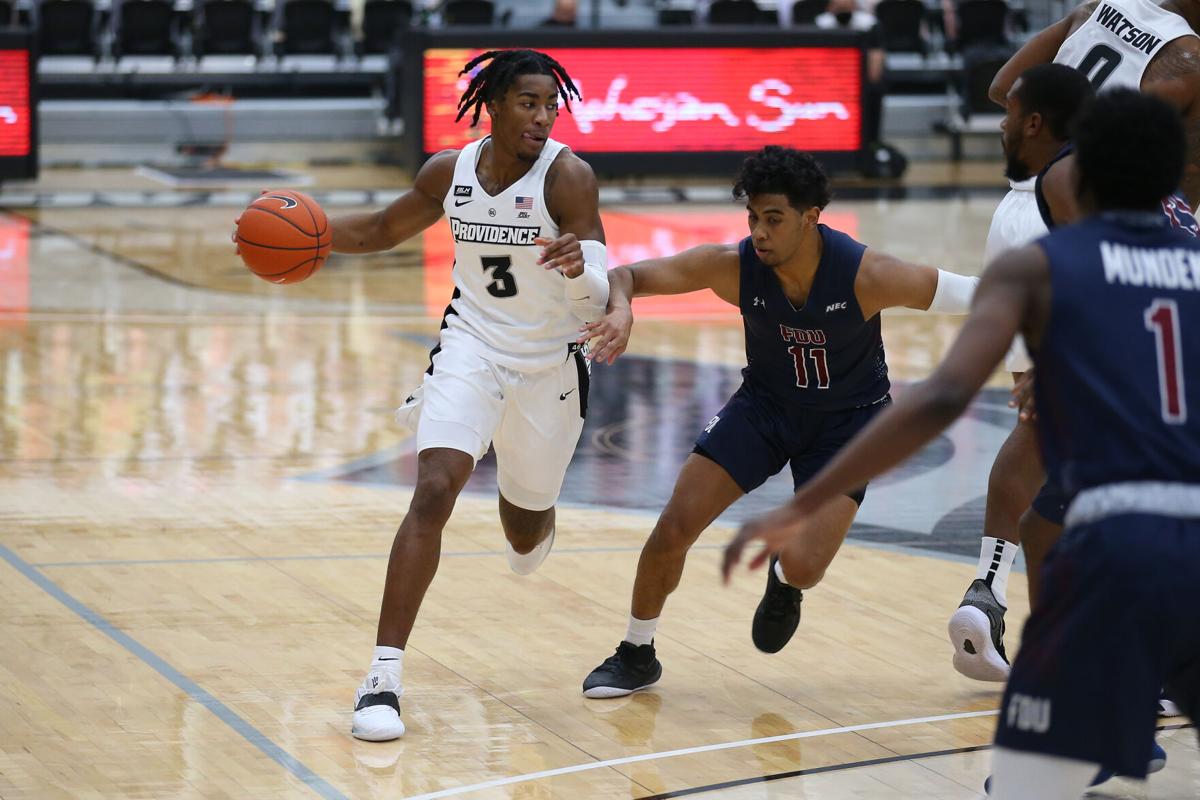 One team showed up Saturday to Alumni Hall a bit shorthanded yet with a major chip on its shoulder. The other team barely registered a pulse for the longest time.

By the end of the first half, the pesky entry from Fairleigh Dickinson succeeded in throwing a major scare in Providence’s direction. Coming out of a timeout, the Knights were spot-on and executed a high-low sequence that enabled them to pull even with the Friars at the break.

Thankfully for PC, the 1-2 punch of Nate Watson and David Duke proved to be a major load for FDU to handle.

Duke poured in 28 points while Watson proved to be just as effective with 20 points as the Friars had enough in the tank to outlast the Knights, 79-67. Coach Ed Cooley continues to have more questions than answers surrounding his team, yet it’s clear that the Friars are in excellent hands when Duke and Watson are grooving at the same time.

“Myself and Nate, we do what we have to do to put our team in the best position,” said Duke, who finished as the Friars’ leading scorer for the second straight game. Watson has also led PC (3-2) in scoring twice while he and Duke shared top honors in the the loss to Indiana.

“I don’t necessarily think we’re each going out trying to be the top scorer. In the heat of the moment, we know who we need to get the ball to,” Duke said. “We’ve taken the lead over the past few games, but I think that’s how the game has flowed.”

Duke and Watson made 15 of PC’s 27 field goals and made 18 of the team’s 24 free throws. The quest for a third scoring force continues to be a major source of concern as one potential candidate continues to struggle. Junior A.J. Reeves missed all five field-goal attempts on Saturday — all from beyond the arc — and has totaled just four makes from the field in four games since putting up 14 points in the season-opener.

Reeves isn’t the only Friar that's been unable to get into a rhythm. Starting point guard Jared Bynum was a nonfactor versus a Fairleigh Dickinson squad that lost two players due to COVID-related opt-outs. Bynum went 1 for 4 from the field and missed all three of his attempts from beyond the arc. His ability to distribute the ball was nonexistent - one assist in 29 minutes.

Another first-year Friar who’s yet to assert himself is Noah Horchler. On Saturday, he finished with more personal fouls (three) than rebounds (two). Horchler managed just one basket in 15 minutes and was once again a step slow on his defensive coverage.

“Greg has to be that energy guy for us. He can guard multiple positions, but he’s got to have more self-confidence. Don’t worry about scoring. Worry about playing and having an impact in the game. If he can do that, I think he’ll be a good player for us,” Cooley said. “Alyn goes against David and Jared every day in practice. His on-the-job training is pretty good — both offensively and defensively. He’s earned it. He’s done a good job. We’re going to need him if we’re going to build depth in our backcourt.”

The Knights wasted little time in bringing the fight to the Friars. Cooley pulled his entire starting group during a timeout after a FDU transition basket at 17:41. The message that was sent by the coach worked for a while, yet the Knights continued to stay in the thick of it behind point guard Jahlil Jenkins (13 points) and Elyjah Williams (team-high 15 points).

The teams pulled into halftime tied at 31-31 with the Friars committing nine turnovers compared to one assist. FDU also turned the ball over nine times, yet was 12-of-25 from the field.

PC appeared to find its footing early in the second half, building a 40-33 lead behind Bynum’s lone hoop of the game that turned into a three-point play. The Knights kept charging and still were within striking distance at 50-44 after Jenkins made two free throws with 12:25 left.

It was still a six-point game when the Friars were finally able to put the Knights down for good. Watson scored inside with Breed and Gantt also contributing to help push the lead to 62-47 with nine minutes left.

The Friars came in shooting 18% on 3-pointes and were once again ice cold, making just one of 15 attempts. With one more non-conference tune-up on tap before the arrival of Big East play, Cooley knows that the shooting percentage is going to have to jump for the Friars to play the role of league contender.

“It’s going to be tough to beat high-quality teams if we can’t shoot the ball,” said Cooley.

Traditionally, the first Saturday in December has been set aside for the annual PC-URI tilt. For reasons that have already been well-documented, the teams will resume their rivalry in 2021. Asked about not playing the Rams this season after beating FDU, Cooley responded, “It's a good game. It's a great game. Right now, it wasn't in the works for us this year. I don't know why everyone makes a big deal of it. Providence College cares about Providence College. Period. The championship to the Big East does not go through Kingston. It goes through the Big East." … Friar junior Jimmy Nichols blocked three shots in the win. … PC will travel to TCU on Wednesday as part of the Big East/Big 12 Challenge. Big East play opens next Saturday with a home game against Xavier.

PHOTOS: Perched by the docks at sunset in Stonington Borough

At the Library: A unique date night, courtesy of the library