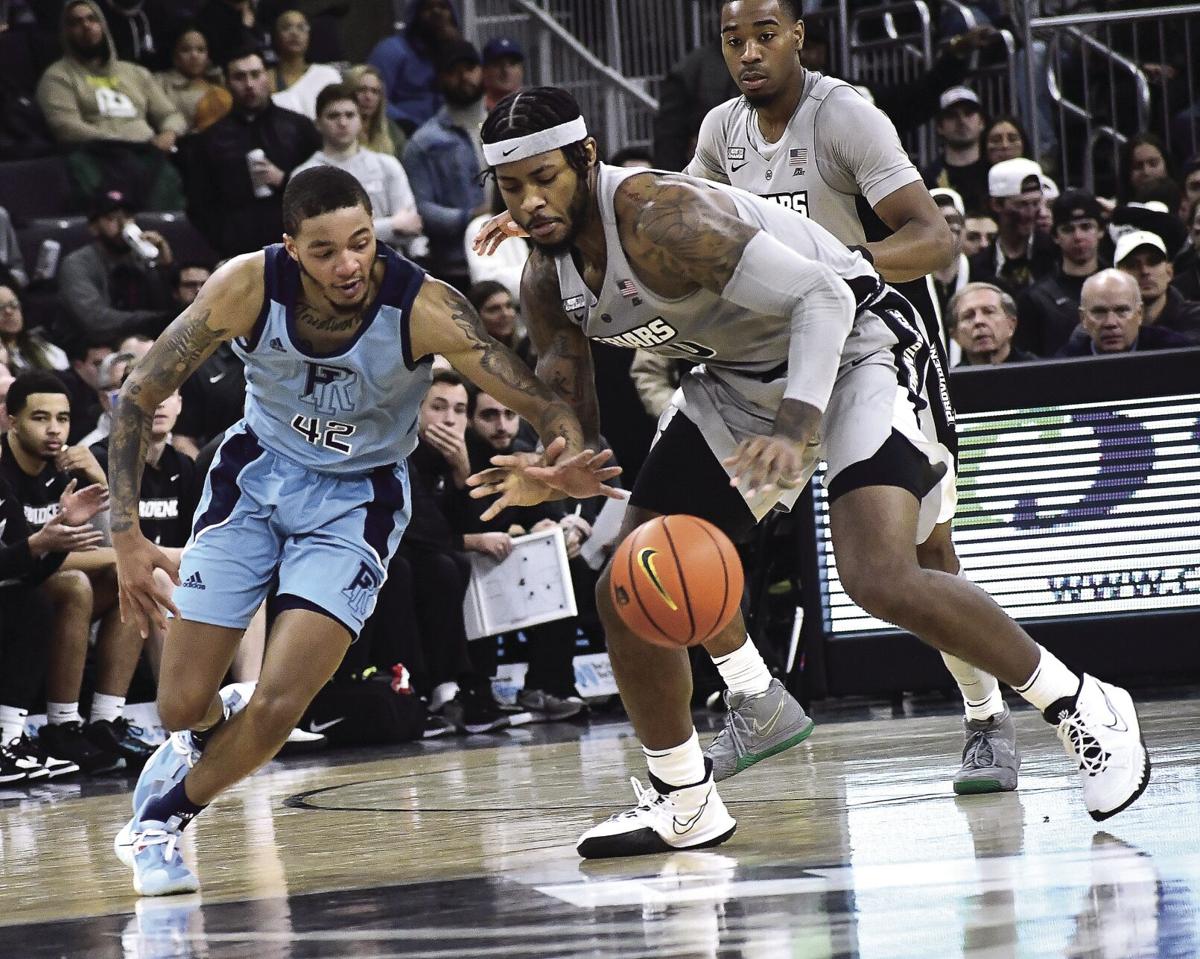 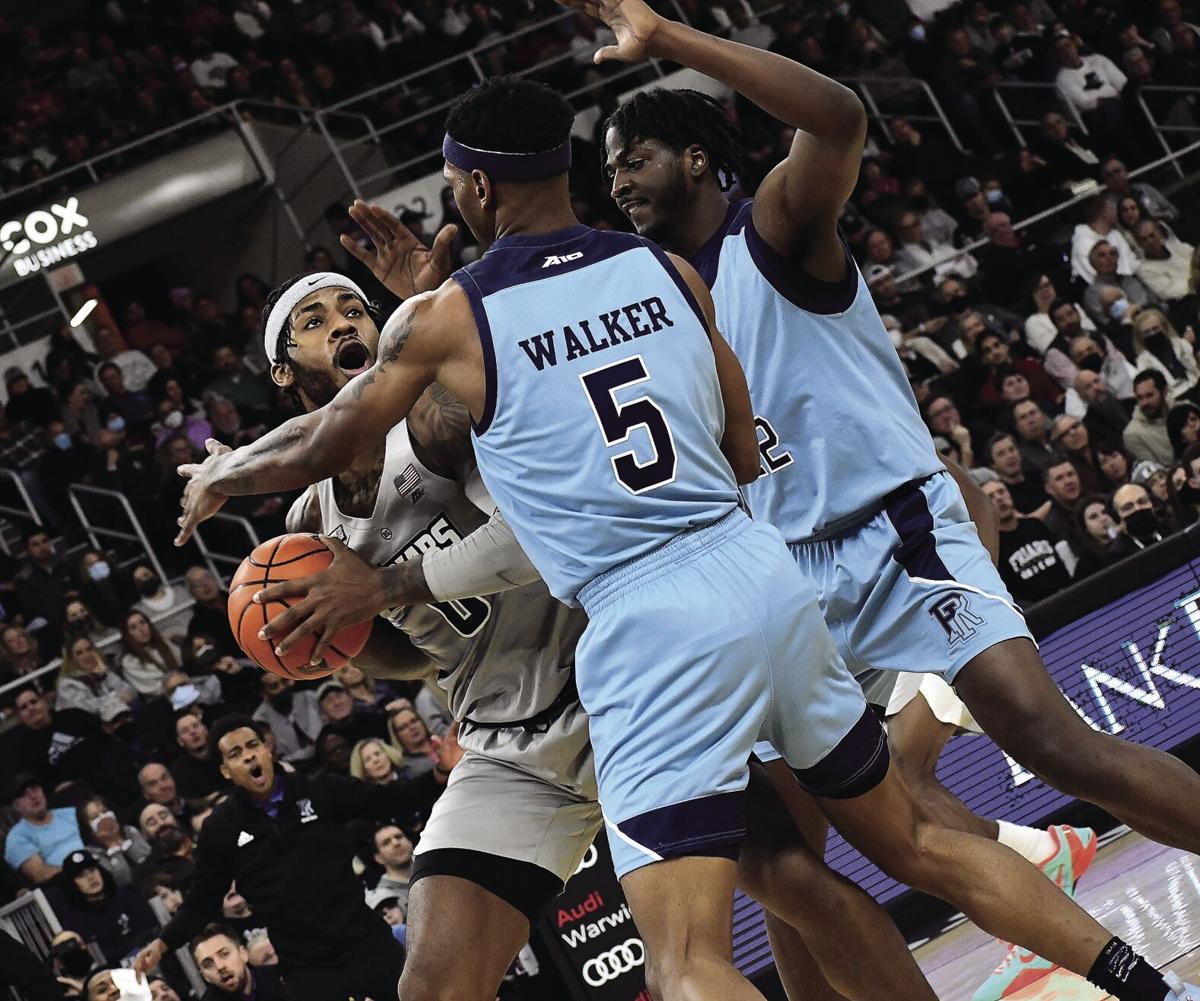 PC’s Nate Watson is pressured under the boards by URI defenders Antwan Walker and Mahkel Mitchell during first- half action at the Dunkin’ Donuts Center Saturday in Providence | Ernest A. Brown, Special to The Sun 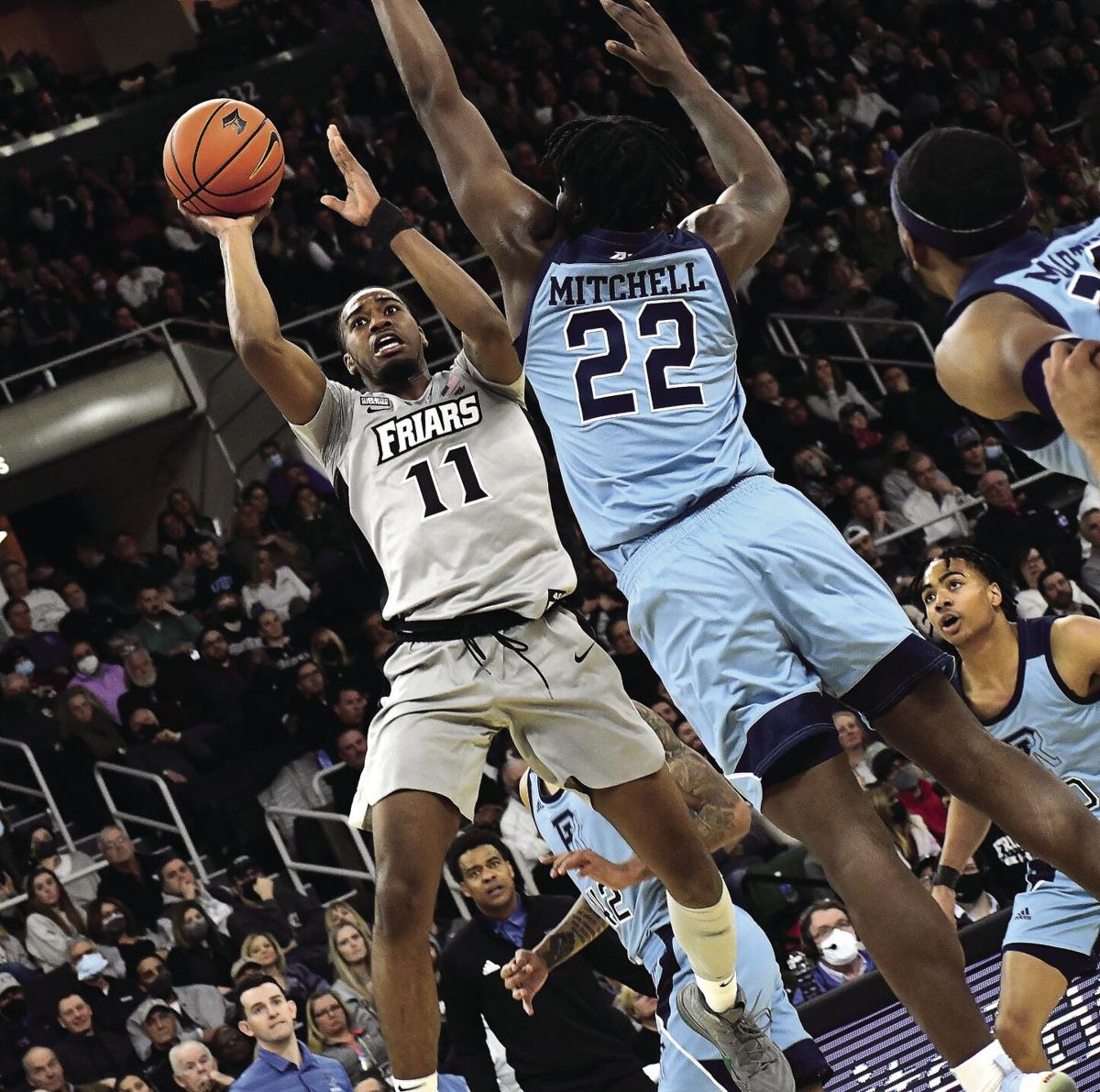 AJ Reeves gets off a shot against URI defender Makhel Mitchell during first-half action at the Dunkin’ Donuts Center Saturday in Providence. | Ernest A. Brown, Special to The Sun 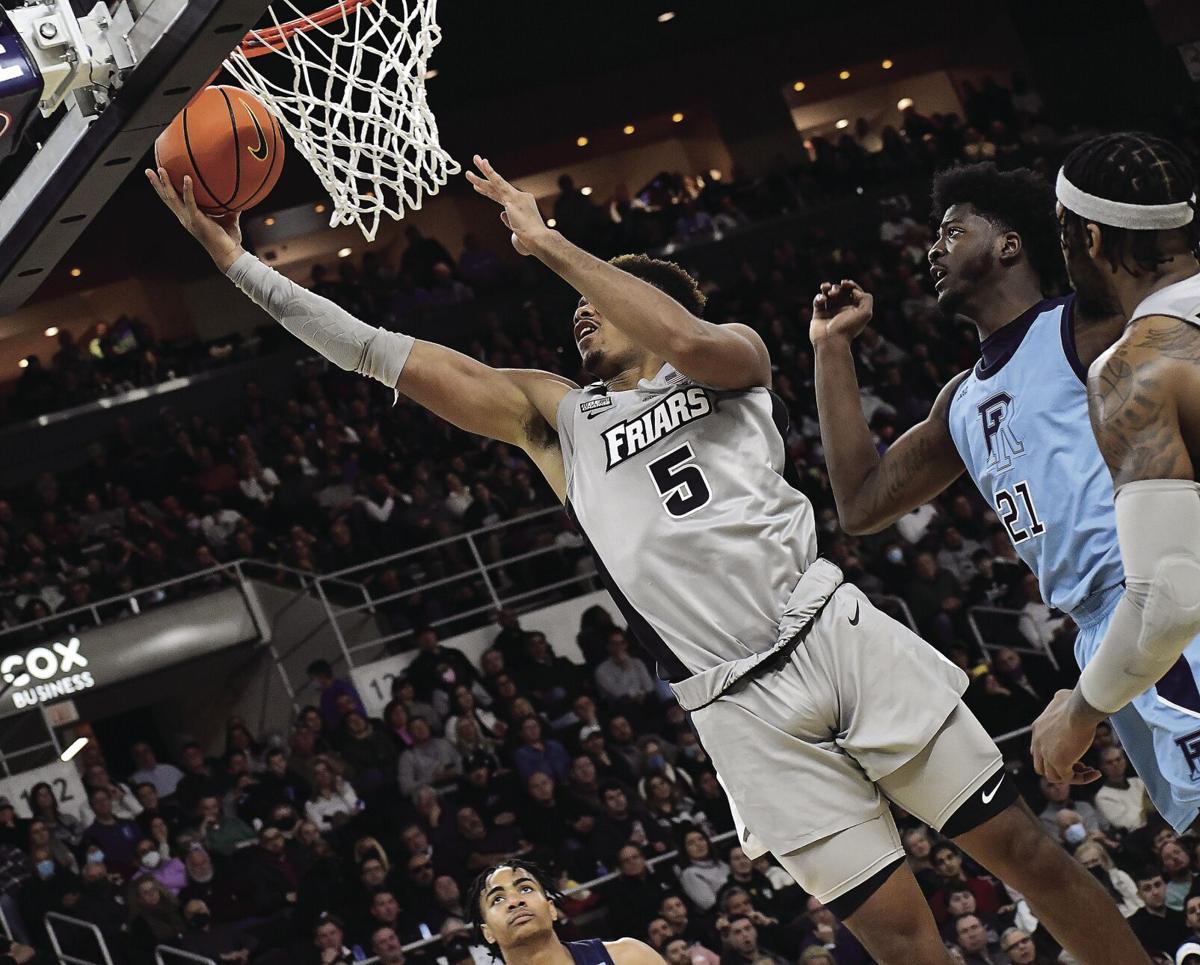 Providence College's Ed Croswell scores inside against URI at the Dunkin’ Donuts Center Saturday in Providence. | Ernest A. Brown, Special to The Sun

PC’s Nate Watson is pressured under the boards by URI defenders Antwan Walker and Mahkel Mitchell during first- half action at the Dunkin’ Donuts Center Saturday in Providence | Ernest A. Brown, Special to The Sun

AJ Reeves gets off a shot against URI defender Makhel Mitchell during first-half action at the Dunkin’ Donuts Center Saturday in Providence. | Ernest A. Brown, Special to The Sun

Providence College's Ed Croswell scores inside against URI at the Dunkin’ Donuts Center Saturday in Providence. | Ernest A. Brown, Special to The Sun

PROVIDENCE — The return of the rivalry between Providence College and the University of Rhode Island belonged to the Friars.

Providence started fast, took a hit from the Rams, then reasserted itself before halftime and stayed in control en route to a 66-52 win on Saturday afternoon at the Dunkin' Donuts Center.

“I was proud of our men, really proud of our men,” Providence coach Ed Cooley said. “Watching the University of Rhode Island on film, they’re really long and athletic, they really guard you. Offensively, they play inside-out. I think this was one of the more connected teams we’ve played in a long time, in terms of what they did on both sides of the ball.

"I thought our defense was pretty good today, especially our pressure. We didn’t score for a while. We were stuck on 17 for about 35 years. We were able to turn up our pressure and get some easy baskets. And Ed Croswell once again had a cape on.”

A packed house of 12,947 greeted the return of the Ocean State matchup after its hiatus in 2020, and those in black and gray had a lot to cheer about. The Friars bullied the Rams in the rebounding department, finishing with a 45-30 edge, and had an answer for every push in extending their capital city win streak. URI hasn’t won in Providence since 2002. The Rams had won two of the last three meetings overall, both in Kingston.

“Let me tip my hat right away to Ed Cooley and the Providence Friars program,” URI coach David Cox said. “That was an outstanding performance for 40 minutes. Ed really had them ready to go. Those guys were physically imposing and they played with an urgency today. They punched us in the mouth.

The Friars sprinted off the starting blocks to a 9-0 lead on 3-pointers by Noah Horchler and Al Durham. Rhode Island made just two field goals in the first seven minutes of the game as the deficit grew to 17-5.

Things changed dramatically soon after. A jumper by Jeremy Sheppard started an extended 15-0 run by the visitors, a surge that also featured a highlight-reel crossover and dish by Sebastian Thomas for an Ishmael El-Amin 3-pointer. Sheppard’s free throws with 6:27 left put URI ahead 20-17. The Friars didn’t score for 7:24.

But the back and forth wasn’t over. Sparked by Croswell, Providence surged into a 35-24 halftime lead. Croswell had 11 points in the final 5:54 of the first half as the Friars outscored Rhody 18-4 on the heels of the 15-0 URI run.

The Friars finished the first half with 15 second-chance points and a 24-13 rebounding advantage. Some timely pressure also helped the cause, with URI committing 10 first-half turnovers.

“Ed Croswell killed us in the first half,” Cox said. “They had 15 second-chance points in the first half. That was the difference. We were down 11 and we played good enough defense. We struggled a little bit offensively with their size and their length. But I thought we played good enough defensively. Just gave up too many offensive rebounds, too many second-chance points. Can’t do that against a team like this on the road.”

The Rams had better luck on the glass in the second half and ended up winning the turnover battle but their best run still left them short. A 13-2 surge keyed by Thomas brought the Rams within six as the clock ticked under eight minutes. Much as they did in the first half, the Friars delivered a final push to get to the finish line, out-scoring Rhody 12-4 over the final 5:04.

Noah Horchler provided the finishing touch with a pair of 3-pointers down the stretch, including one off a turnover that served as the dagger.

“Coach trusts me to take shots,” Horchler said. “I’m excited to step up in moments like that and take a big shot.”

Horchler led all scorers with 16 points. Croswell, the La Salle transfer who has been coming on lately, racked 13 points and 15 rebounds in his first double-double with the Friars. Al Durham had 14 points.

Sheppard was the only Ram in double figures with 10 points. Makhel Mitccell scored nine points, while limited by foul trouble. Makhi Mitchell was also in foul trouble throughout and finished with four points, plus five turnovers. Thomas had four points and three assists. Antwan Walker had eight points off the bench.

Providence ran its record to 8-1, following up its big win over Texas Tech with a rivalry victory.

“I think the thing not being talked about is our emotional maturity and our physical maturity,” Cooley said. “We didn’t get rattled when they made their run in the first half and in the second half.

"We were able to hold our composure. It says a lot about the maturity of the group, and they should be. They’re 22, 23 years old. It’s something I expect and something we talk about.”

URI is 6-3, having missed a chance at what would have been its best non-conference victory of the year.

“We showed a lot of character, a lot of fight tonight,” Cox said. “We just didn’t execute at a high enough level on the offensive end and they killed us on the glass. That was the difference tonight.”

End of an era: Cottrell Brewing Company to close after 25 years

Optimism grows in Westerly on the COVID-19 front

PHOTO: Drips off an icicle