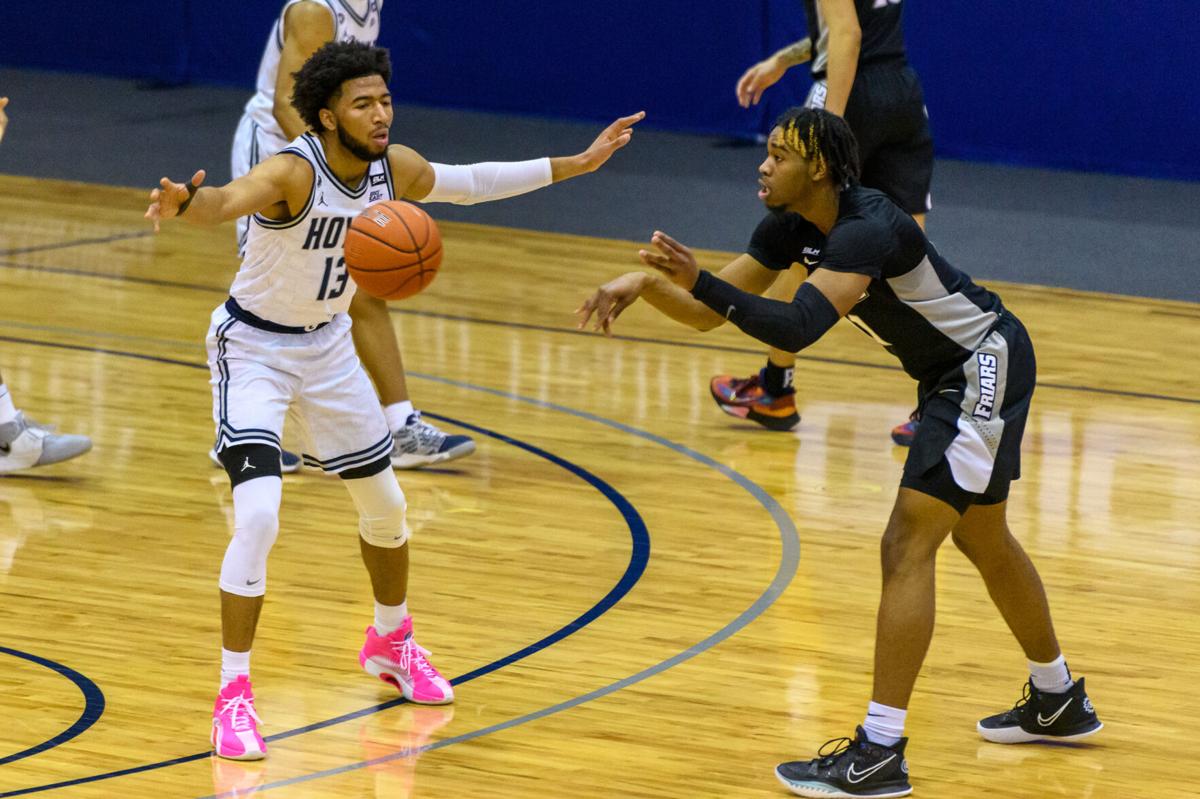 Providence's A.J. Reeves passes to a teammate. Reeves finished with 28 points for the Friars. Photo courtesy of Providence College. 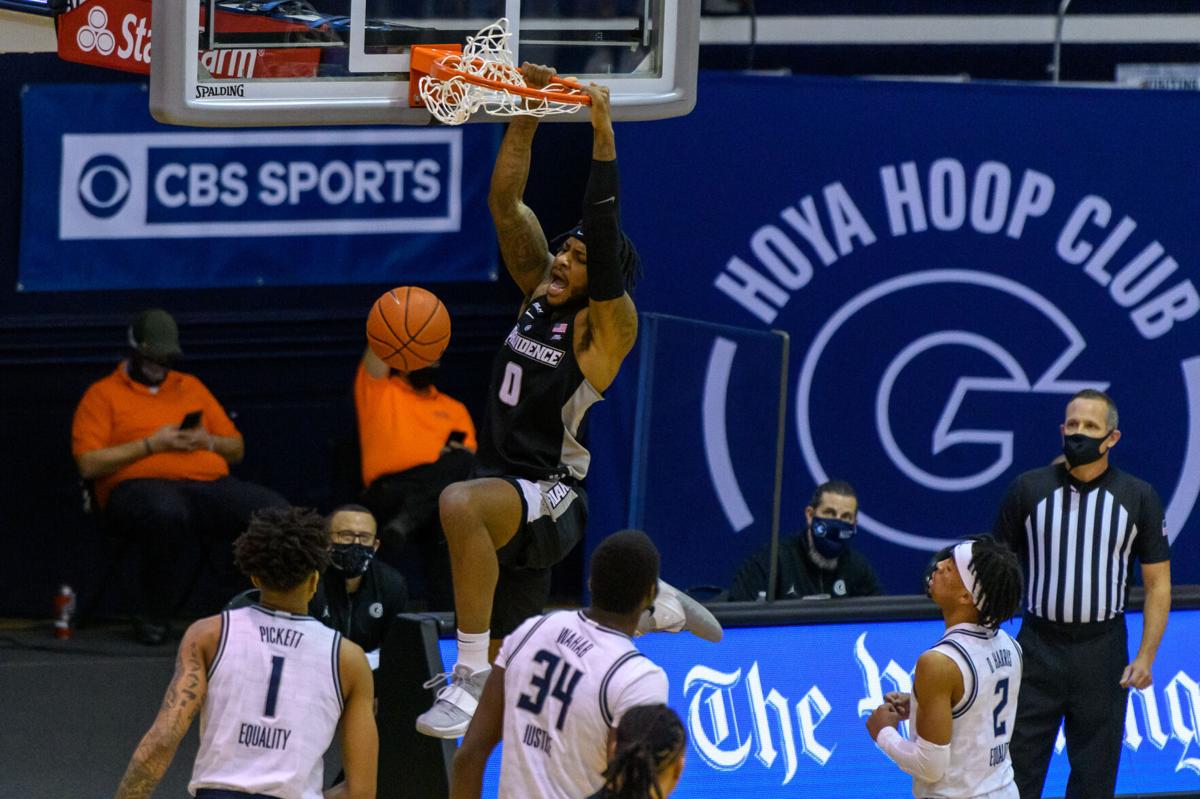 Providence's A.J. Reeves passes to a teammate. Reeves finished with 28 points for the Friars. Photo courtesy of Providence College.

Needing to make two free throws to push Saturday’s game at Georgetown to overtime, Providence’s David Duke made the first but missed the second attempt.

The horn sounded as the Hoyas made a triumphant return following a 21-day absence with a 73-72 win. The final sequence didn’t go PC’s way, yet Duke’s 1 for 2 showing at the charity line wasn’t the primary reason why the Friars were once again left crestfallen.

A Georgetown team that hadn’t won a game since Dec. 13 administered a royal beating on the backboards as Providence was outrebounded rather convincingly (47-33, 17-10 on the offensive glass).

The shortcomings in the rebounding department came to a boil when the Friars forced the Hoyas’ Jahvon Blair into a missed shot with 26 seconds remaining. With Nate Watson on the bench — he fouled out with 3:19 left — the Friars couldn’t corral the miss at a time when they trailed 70-69.

Georgetown’s Jamporko Pickett picked up the loose ball before getting it to Blair, who made two at the line with 16.9 seconds remaining. A hoop by PC freshman Alyn Breed was followed by a 1 for 2 showing at the charity stripe by Georgetown’s Chudier Bile.

With 1.5 seconds remaining, the ball was then placed in the hands of an 80% free-throw shooter. If you’re the Friars, you had the right guy in place for such a high-stakes moment. The fact that Duke split the free throws only inflames the offensive rebound that was grabbed by Pickett and turned into free throws by Blair.

“It wasn't the free throw that lost the game. I thought we were incredibly soft on the glass and they had more urgency to the ball,” PC coach Ed Cooley said. “You give up 17 offensive rebounds, you don't deserve to win. We did not earn a road win.”

The latest crushing loss overshadowed one of the better games in A.J. Reeves’ career. The Providence junior served notice that he was on a mission, scoring 11 points in the opening six minutes on his way to pouring in a career-high 28 points.

Reeves’ big day started out in innocent fashion — a score down low for the game’s first basket. After that, he nailed one jumper after another on his way to finishing 10-of-17 from the field, 6-of-12 from 3-point range.

“We always try to get him an early look to get him some confidence,” Cooley said. “We’re going to need another scorer. I’m glad he stepped up. Unfortunately, it happened in a losing effort.”

With Reeves putting together a highlight reel, PC surged ahead by a 29-14 score. There was plenty of rust on Georgetown’s part, yet Cooley decided to turn to his bench — a move that allowed the home team to jump back into the fray with both feet.

With Reeves and Watson (12 points) on the bench, the Hoyas ripped off eight straight points and continued to charge after the two Friar players returned to the court. Georgetown closed the half on a 10-3 run and had to feel pretty good about where things stood despite trailing 42-38 at halftime.

The 15-point deficit was erased when Georgetown's Bile (team-high 19 points) buried a 3 that made it 43-42. The two teams went back-and-forth with PC holding a thin edge (62-59) after Reeves hits his sixth triple.

Watson picked up his fourth foul with 5:40 remaining, yet Cooley elected to roll the dice. The senior’s fifth foul led to two free throws that gave Georgetown (4-8, 2-5 Big East) a 69-65 advantage. A pullup jumper by Greg Gantt was followed by a Reeves steal that led to a breakaway slam dunk by Duke — one of the few easy hoops on the day for the junior. Just like that, the game was tied at 69-69.

An empty possession where the Friars looked lost resulted in a shot clock violation with 1:30 remaining. On the ensuing possession, the Hoyas fed their big man as Qudus Wahab took advantage of Watson’s absence for a score that put the Hoyas up one.

“Our DNA … we’ve just got to get tougher,” Cooley said.

The missed free throw capped off a day when Duke’s scoring touch was nonexistent (2-of-11, five points) but his passing was on-point (seven assists compared to one turnover).

“You’ve got to shake that off. It doesn’t define who he is,” Cooley said.

Four of Providence’s six Big East losses have come by a combined 10 points. PC’s next game is Wednesday at home against Seton Hall.