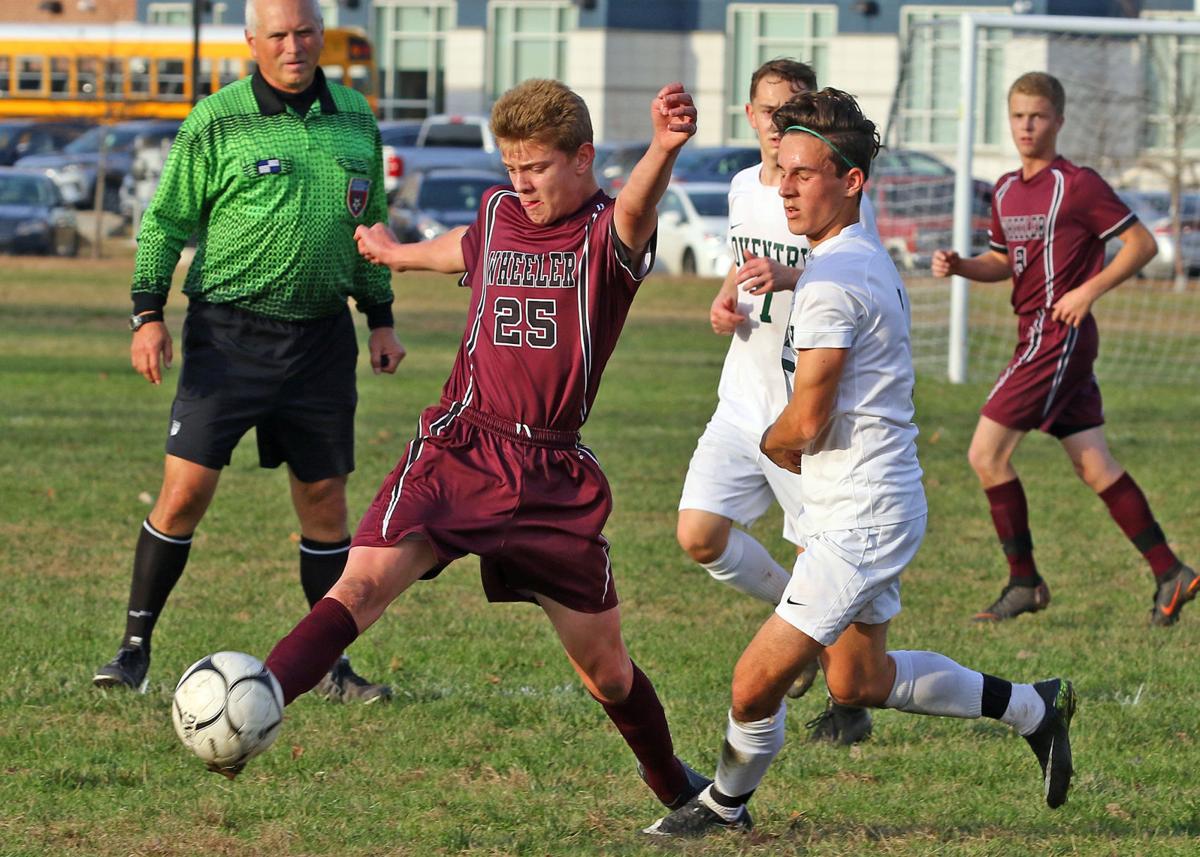 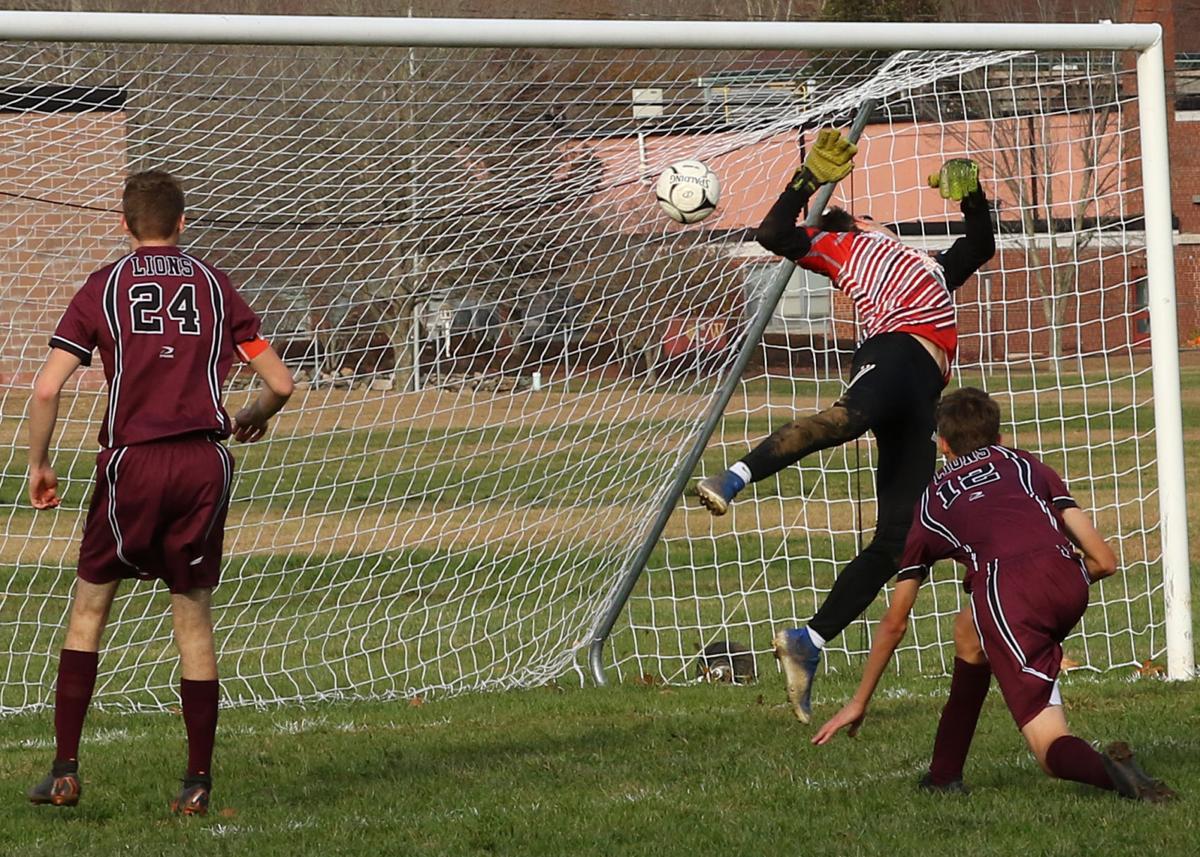 Coventry goalkeeper Jonathan Rogers is unable to stop a header by Wheeler’s Matt Pierce in the first half Monday as Scott Pion (24) looks on. Pierce scored twice in Wheeler’s win. | Jackie L. Turner, Special to The Sun 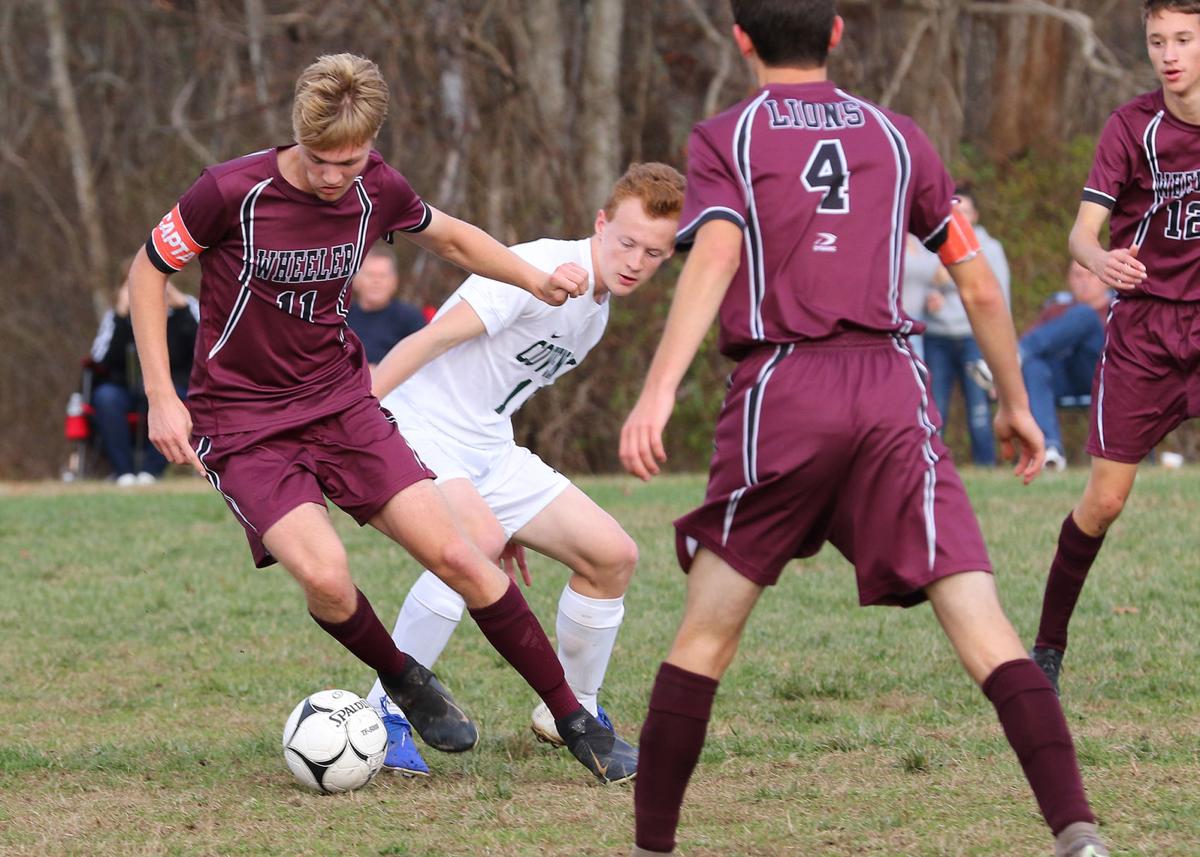 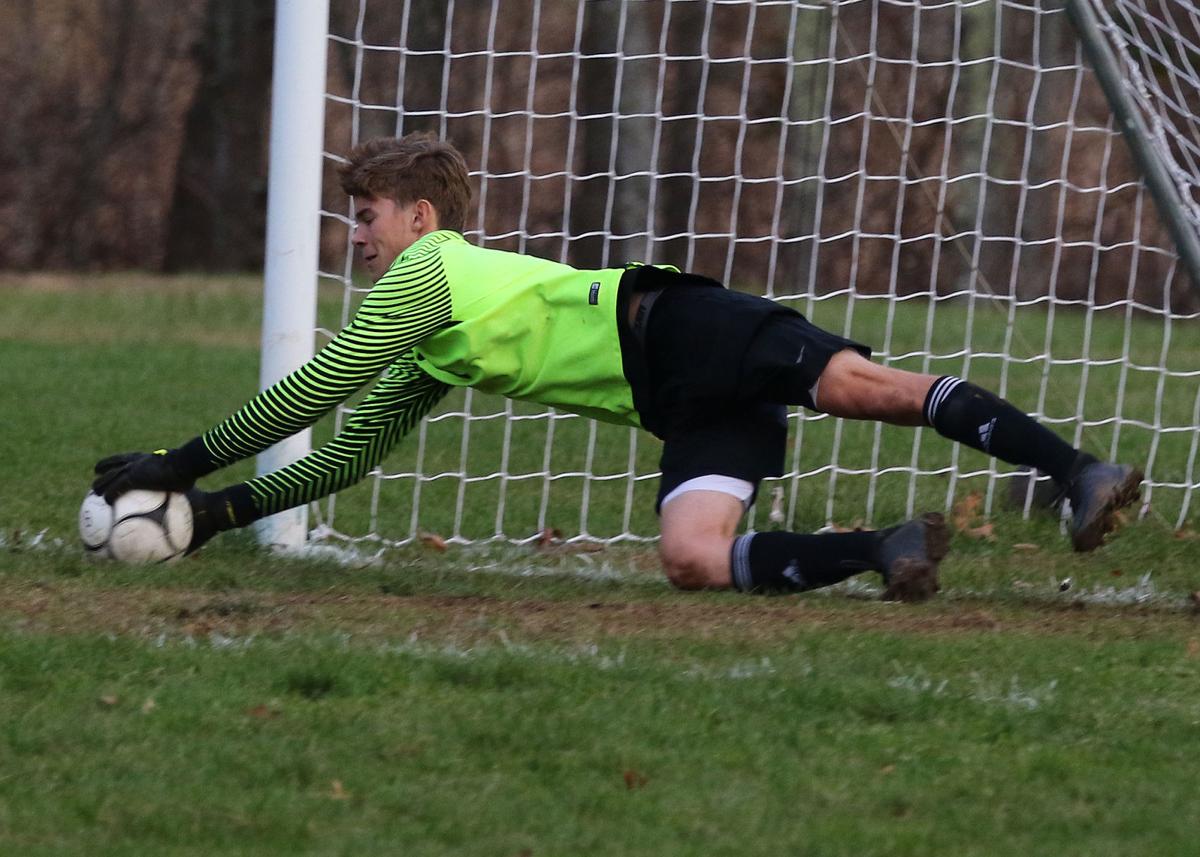 Wheeler goalkeeper Bowen Baker makes a save against Coventry during second-half action. | Jackie L. Turner, Special to The Sun 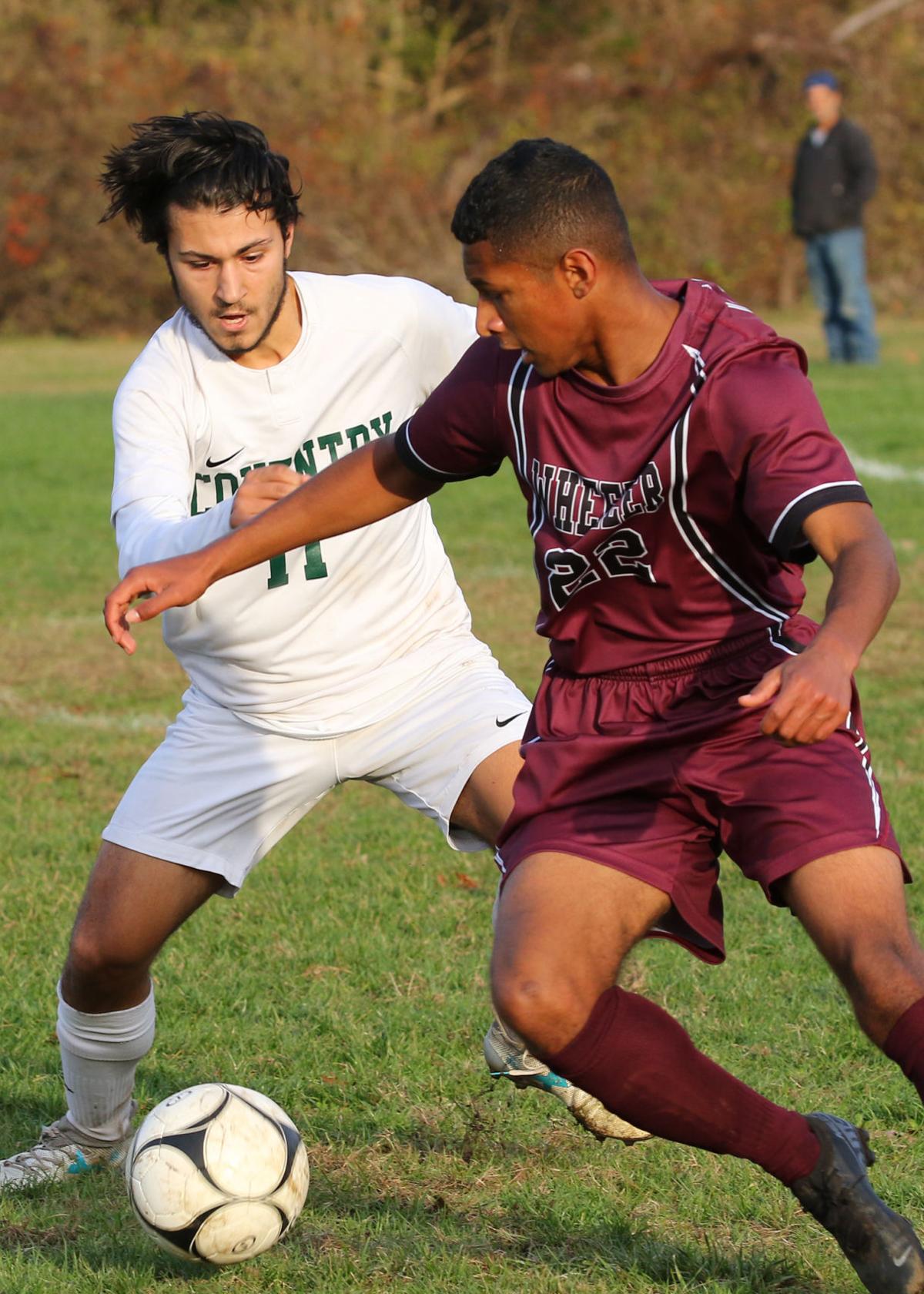 Coventry goalkeeper Jonathan Rogers is unable to stop a header by Wheeler’s Matt Pierce in the first half Monday as Scott Pion (24) looks on. Pierce scored twice in Wheeler’s win. | Jackie L. Turner, Special to The Sun

Wheeler goalkeeper Bowen Baker makes a save against Coventry during second-half action. | Jackie L. Turner, Special to The Sun

He had good reason.

Each team had make three penalty kicks, and Jones was the final shooter in the first round of five.

"That was for sure a long walk," Jones said of his trip to the penalty spot. "I just tried to calm myself down at the line and I just tried to put it away."

Jones did just that, delivering the ball over the goalie's head to lift the 12th-seeded Lions over the the No. 21 Patriots in the first round of the state boys soccer tournament. Wheeler travels to defending Class S state champion Old Saybrook on Wednesday for a second-round game at 2 p.m.

The Lions had taken a 3-2 lead in overtime when Ian Spracklin touched the ball past the goalie and then drove it into the net with 4:37 left in the first 10-minute extra session. Matt Pierce played a ball from the midfield to Spracklin for his 19th goal of the season.

But Coventry (8-9) responded, scoring with 5:05 left in the second overtime when Colby Dubois converted a ball from the back to make it 3-3.

Wheeler probably should have won the game in regulation after taking a 2-0 lead at the half on a pair of Pierce goals.

In the first half, the Lions had 12 shots, five on goal, while the Patriots had two shots, both on goal.

Wheeler's first goal came from about 12 yards away on the left side of the 18-yard box. Pierce dispossessed a defender after a penalty kick and pushed the ball a few touches to his left before he shot.

The second goal, which came with 10:32 left in the half, was textbook perfect.

"It was a perfect ball from Lukas Jones," Pierce said. "I just got my head on it and put it on the opposite side."

Jones played the ball on a direct kick from just a few yards past the center line on the Coventry side of the field. He drove the ball over the back line to Pierce, who timed his leap perfectly.

"I was just trying to place it far post and it was there," Jones said.

Still, coach Joe Mendonca was concerned the two goals might not be enough.

"We talked about it at halftime, a 2-0 score scares me. We were dominating, we were knocking the ball around and doing a lot of good things," Mendonca said. "But if you don't get the third goal, it only takes a goal to come back."

And that's what Coventry did. Dubois scored after a kick from the goalie bounced over the Wheeler back line with 23:12 left in the second half.

About 12 minutes later the speedy and skilled Dubois ran onto a through ball and crossed it to his right, finding Brody Byam in full stride for a goal that tied the game.

"I think we might have gotten a little too comfortable," Jones said. "Our midfield was lacking, so the defense had to push up, so it created space for the Coventry offense. I'm just glad we could get the win."

Mendonca agreed that the Wheeler midfield was too far forward.

An end to inequality: Hundreds gather in Stonington in protest of racism, injustice

URI student studies rare turtles, frogs to learn how to protect them

URI students scramble for housing after reduction in on-campus options

Fewer will attend camp this summer; some camps won't survive