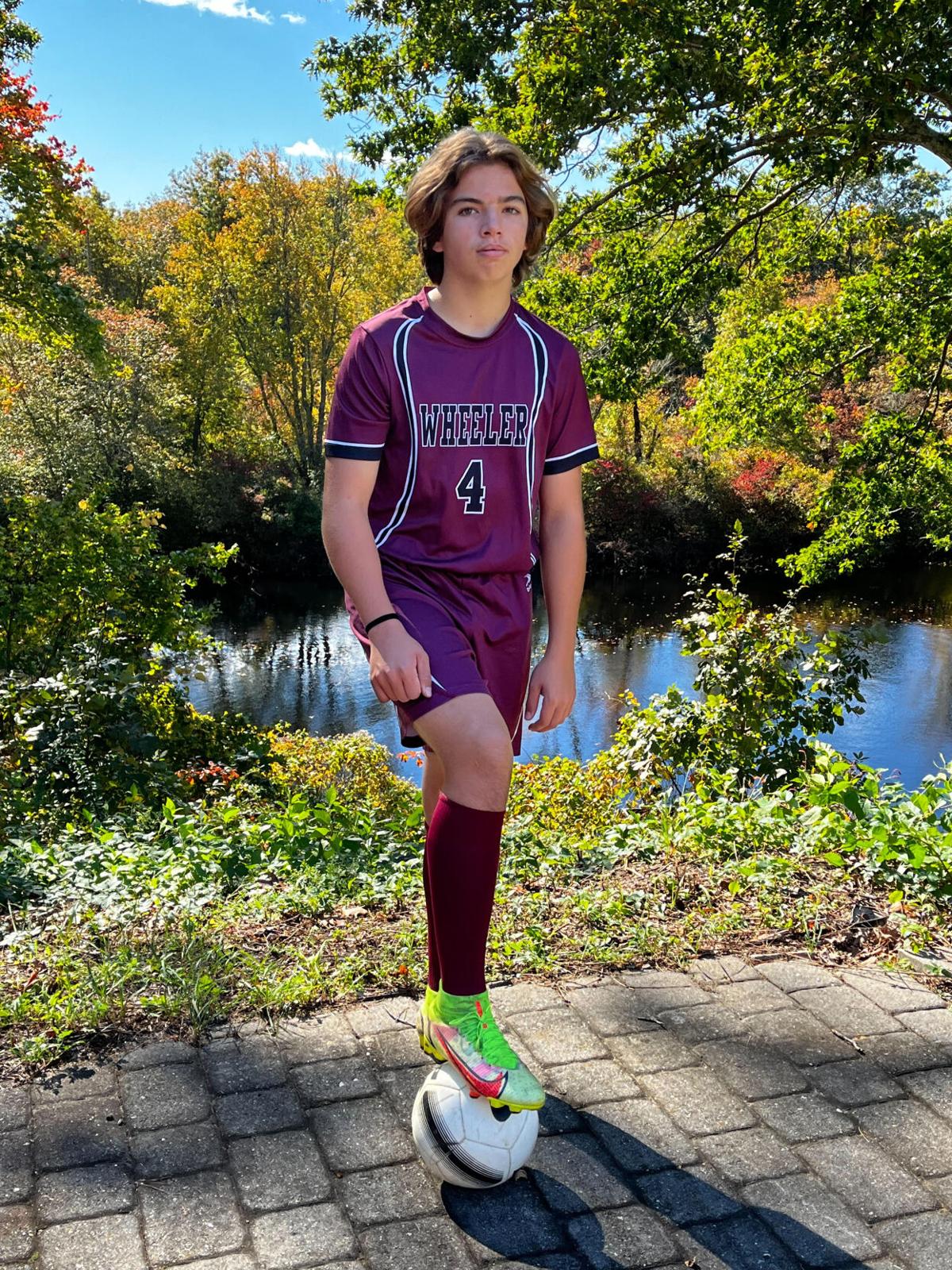 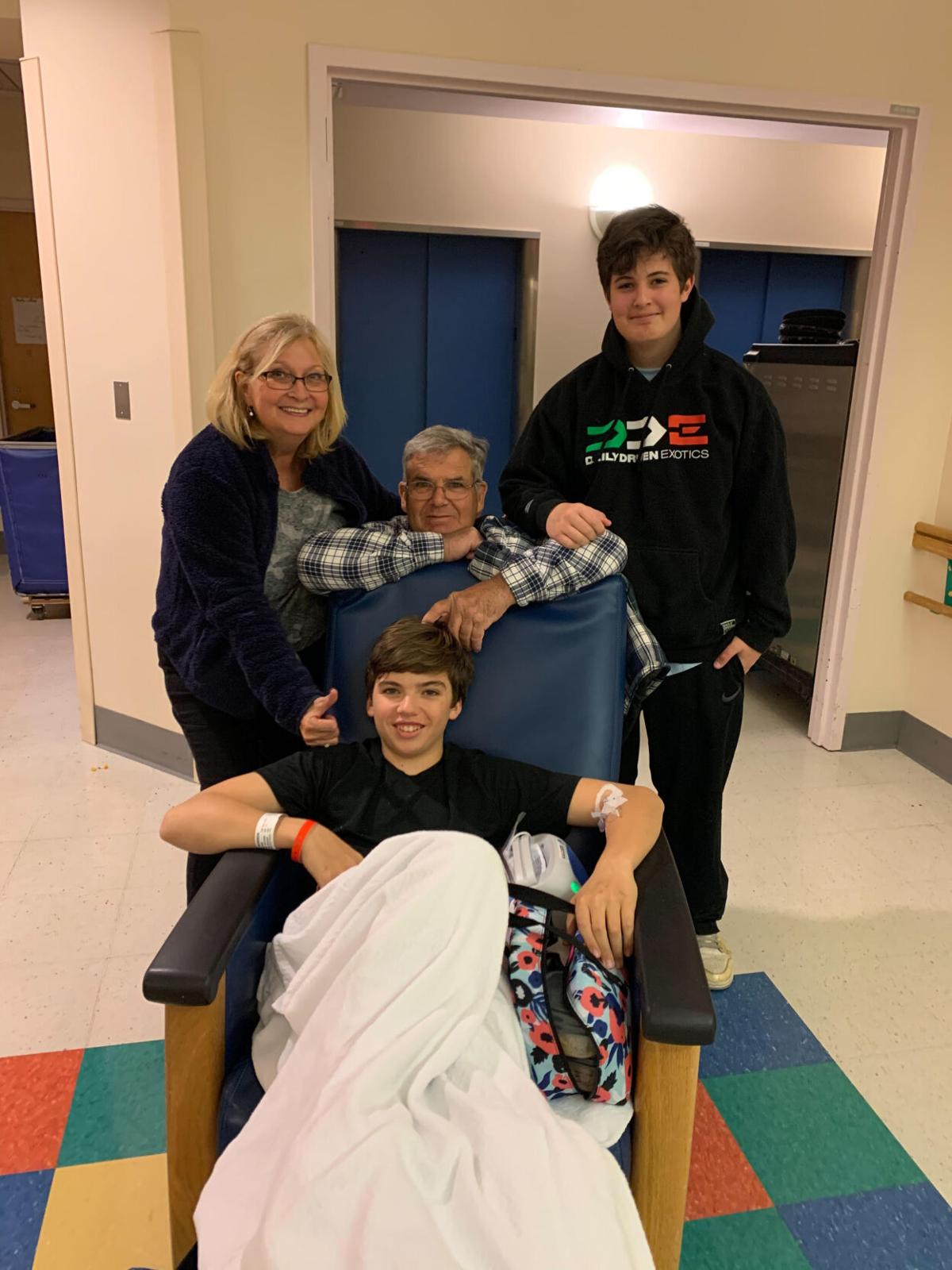 Harrison Avery is shown at Hasbro Children's Hospital in Providence after one of his foot surgeries. Behind him, from left, are grandmother Wendy Perry, grandfather Roger Perry and cousin Tyler Perry. | Photo courtesy Melissa Perry

Harrison Avery is shown at Hasbro Children's Hospital in Providence after one of his foot surgeries. Behind him, from left, are grandmother Wendy Perry, grandfather Roger Perry and cousin Tyler Perry. | Photo courtesy Melissa Perry

But on the first day of practice in August, Mendonca noticed a new player, Harrison Avery, a sophomore transfer from Chariho High, showed a noticeable limp in his running gait.

"I asked him what's wrong," Mendonca said. "He was running awkwardly."

Avery paused from his conditioning drill, pulled Mendonca aside and told him one of the most amazing stories that the veteran coach has ever heard.

"I told him everything," Avery said. "I told him in February of 2020, I had a horrific accident at home that caused me to have my toes, really half of my left foot, amputated. Doctors said I might be able to walk, but they gave me little hope of playing soccer again."

Avery did much more than finish the conditioning drill. On Nov. 9, the starting forward completed a remarkable comeback season for Wheeler, finishing with three goals to register at No. 2 on the Lions' goal-scoring list behind Matt Pierce. Two of the goals were scored off his left foot.

"I think of the symbolism of me scoring with half a left foot," Avery said. "It shows me to never give up and to put your mind toward accomplishing what you want out of life no matter what the circumstances. Just to get out on the field and play the sport I love was a victory in itself. To actually be able to score goals, I totally exceeded my expectations."

Avery, a 5-foot-9, 160-pounder, was a top scorer at every level of his youth playing days, which included stints in Groton, down in Florida and at Chariho. He once scored nine goals in a recreation-league game.

But on that fateful February day, in an accident he and his mom, Melissa Perry, chose not to disclose in detail, he wondered if his dreams to become a varsity soccer standout had ended.

Mom drove her son to Westerly Hospital, which then transported him to Hasbro Children's Hospital in Providence. He was hospitalized for two weeks and underwent multiple surgeries to "ensure the wound remained clean and to modify the amputation as needed," his mother said.

Avery rode a knee scooter to get around for close to the rest of 2020, keeping pressure off the refigured left foot to allow his wounds to heal. His psyche was hurting as much as his foot. He tried remote learning for most of the pandemic, but the family decided to leave Chariho and repeat the 10th grade this scholastic year at Wheeler.

He suffered a setback when he accidentally kicked the family dog's bowl. He endured six surgeries during rehab, including a 10-hour operation during which skin graphs were performed to heal his foot.

"There were some dark times emotionally for sure," Avery said.

Perry, who is an occupational therapist by trade, aided in rehab early and gave way to a physical therapist as Avery began to walk again unaided. Both mom and son knew an eventual return to the soccer pitch would serve as the best therapy.

"When he wasn't playing soccer and riding on his knee scooter, Harrison was not himself," Perry said. "When he started to walk, jog and then run on the soccer field, he started to get his old, jokester personality back."

Avery returned to his old self on the soccer field, too. He enrolled at Wheeler and repeated his sophomore year since he missed much of 2020-21 because of COVID-19 remote learning and his rehab.

He started the season with an insert in his left cleat. When that became uncomfortable, he moved it.

"I learned to run over the summer with my new left foot," Avery said. "I know I have a hitch when I run but I actually think I'm faster now. I don't expect any favors from anyone. Actually, I'm not sure if our opponents know I don't have two healthy feet."

Perry shed a few tears when Avery made his Wheeler debut.

"I knew the mental and physical work he put in to get back to this point, to take the field again," Perry said. "When he made his decision to play soccer again early last summer, it really motivated him with his final rehab. It's amazing. He didn't walk for nine months in 2020."

Avery enjoyed a sophomore season that any player would welcome. He scored a rare corner-kick goal, curling the ball into the net from the left side. Another goal came after he executed a tackle, dribbled past a defender and rammed the ball into the net, beating on onrushing goalkeeper.

And there was a goal when a sliding Avery redirected a nice cross from teammate John Anderson into the net with his left foot.

"I told Harrison about Tom Dempsey, who set the NFL field goal record of 63 yards back in the day with half a right foot," Mendonca said. "What Harrison is doing is inspirational. The coaching staff was very impressed by Harrison. He can get better, too, if he dedicates himself. You could see him becoming an All-ECC player by the time he graduates in two years."

Anything is possible for Avery.

"I've thought about the Paralympics, a lot of things," Avery said. "After feeling as low as a 14-year-old can feel after my horrible accident, I feel great now playing soccer again at Wheeler. I'm back in the game."