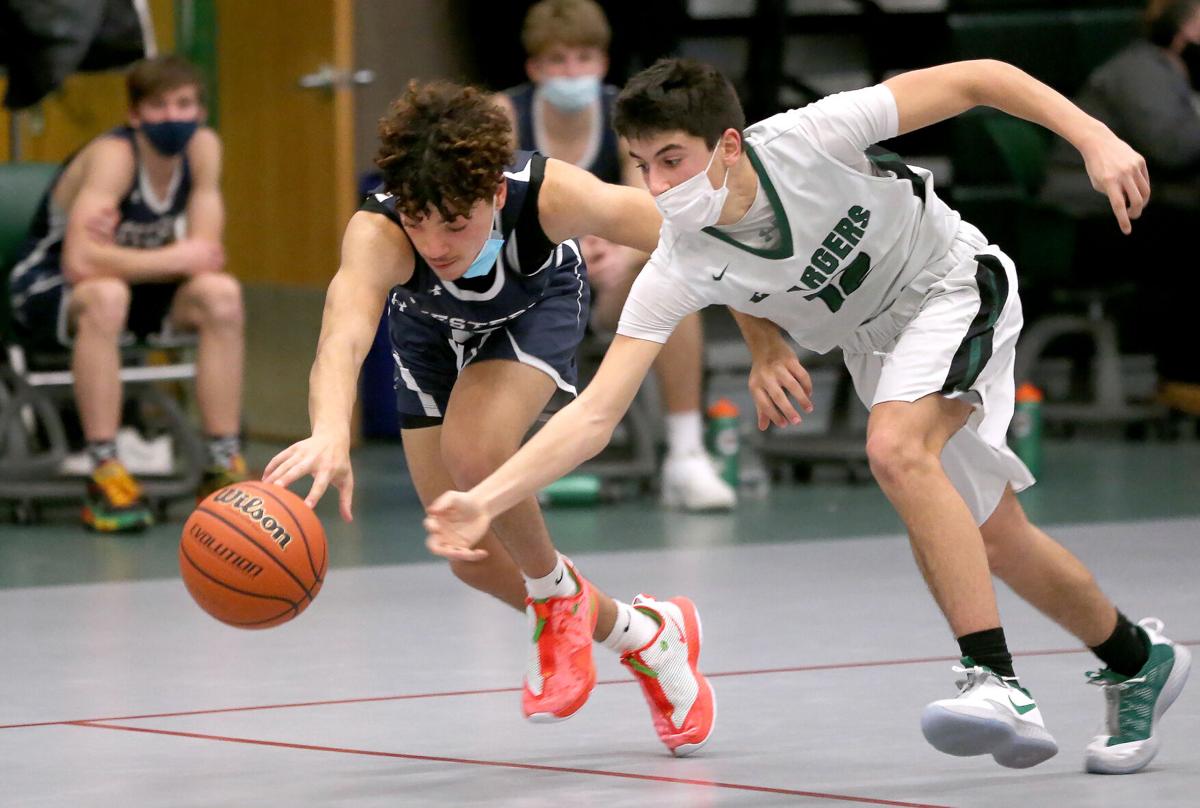 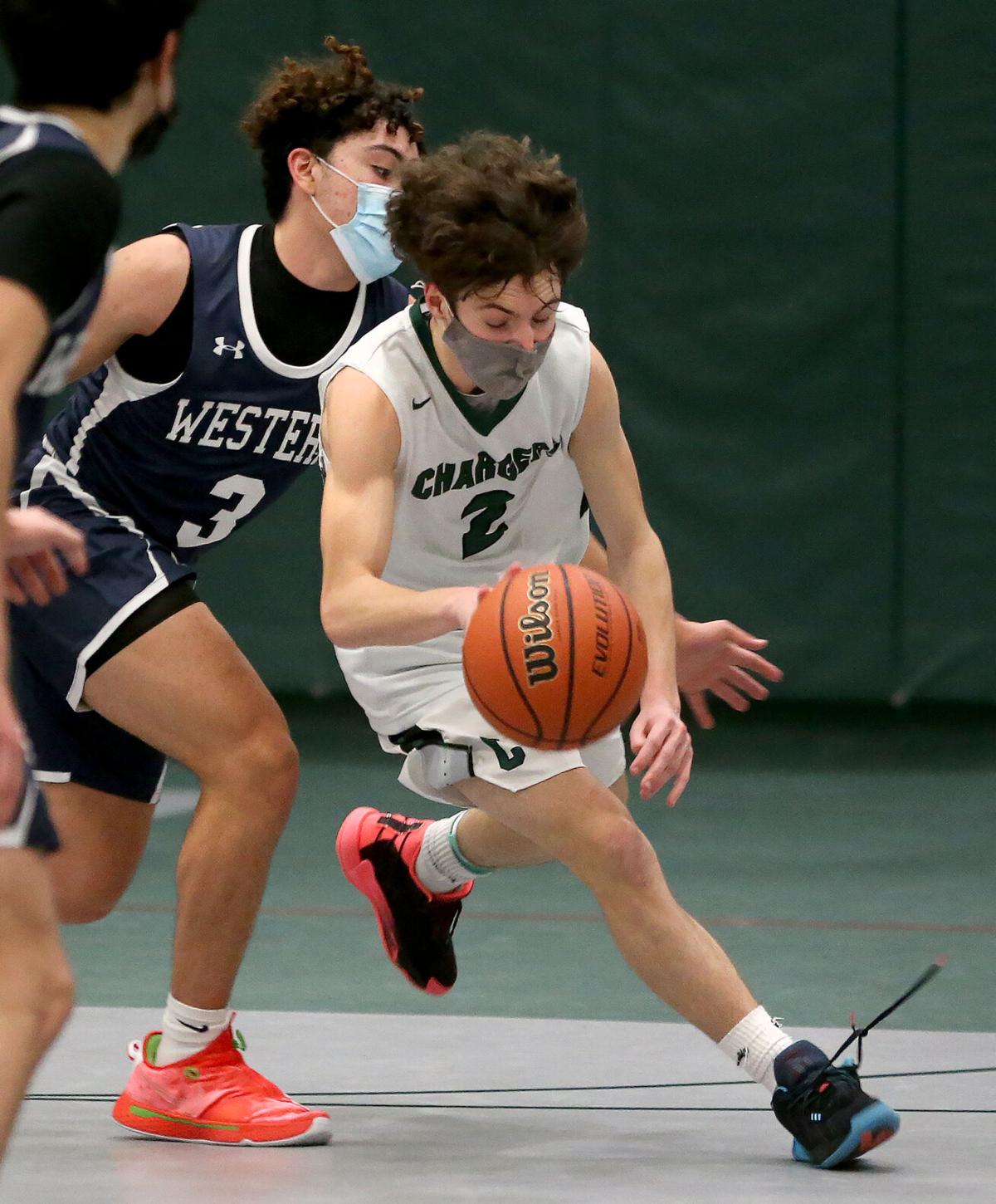 Chariho’s Jarrett Boisclair bring the ball up court against Westerly during the first half on Monday. Tim Martin, Special to The Sun 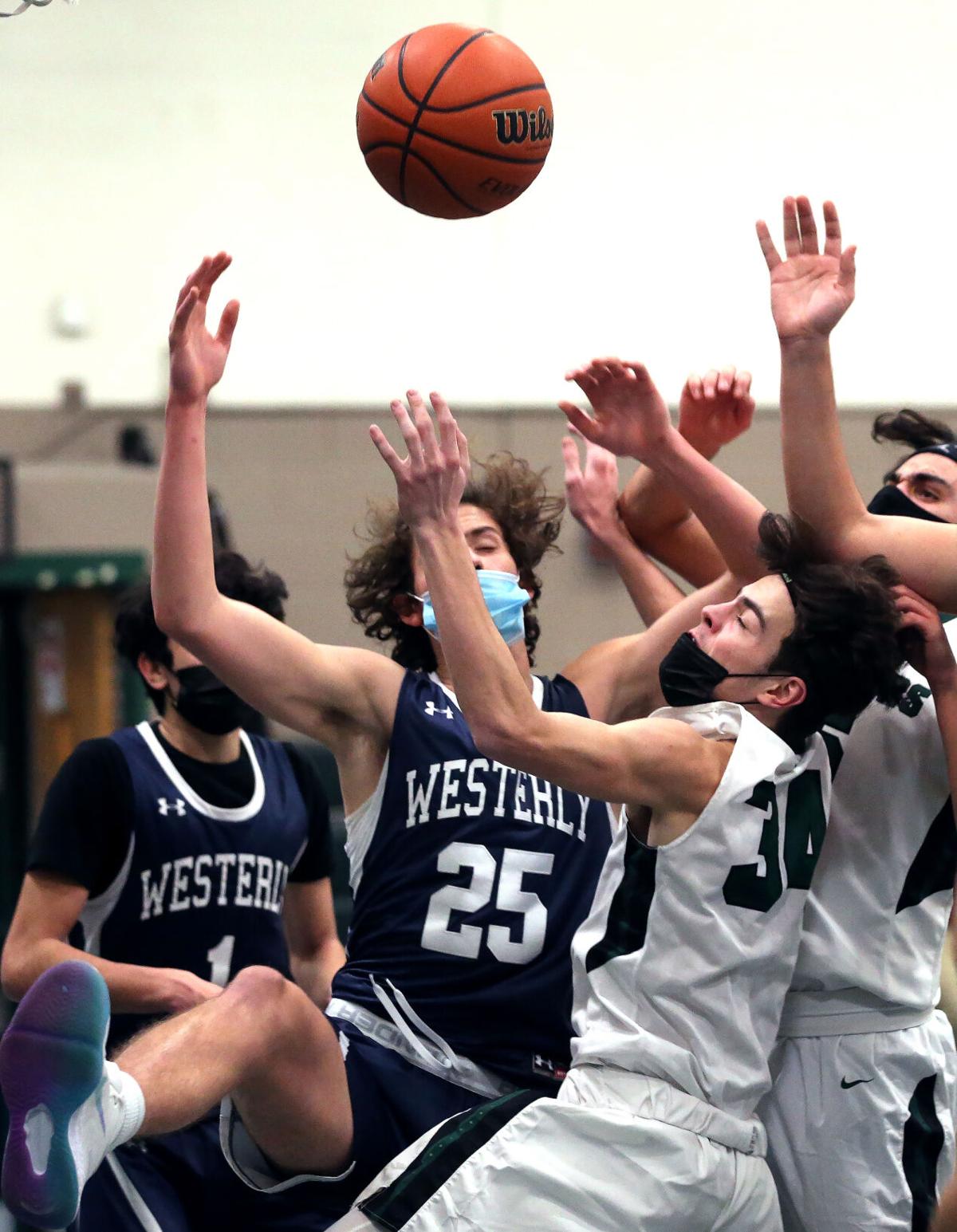 Westerly’s Ben Gorman (25) battles Chariho’s Kyle McGovern for a rebound during the second half on Monday. Tim Martin, Special to The Sun 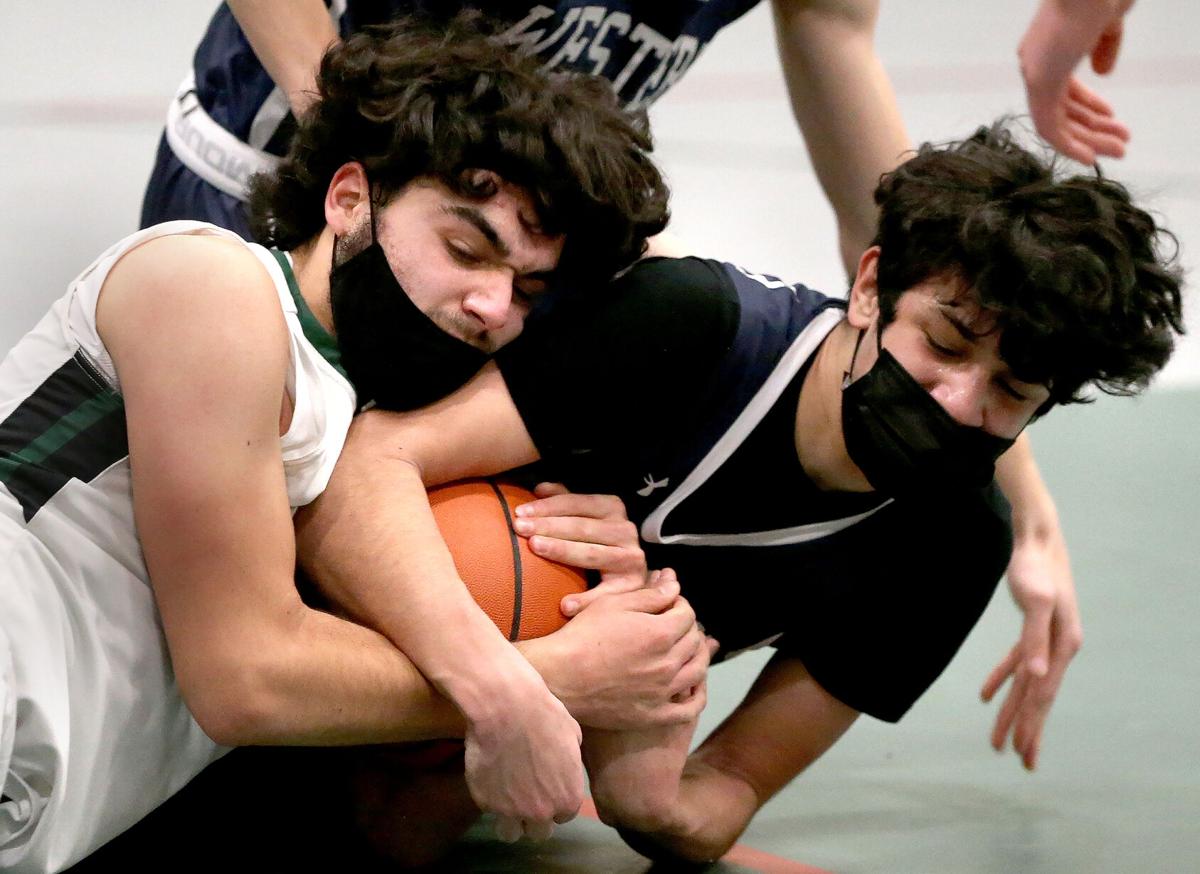 Chariho’s Zach Boschwitz, left, battles Westerly’s Jesse Samo for a loose ball  during the second half. Tim Martin, Special to The Sun 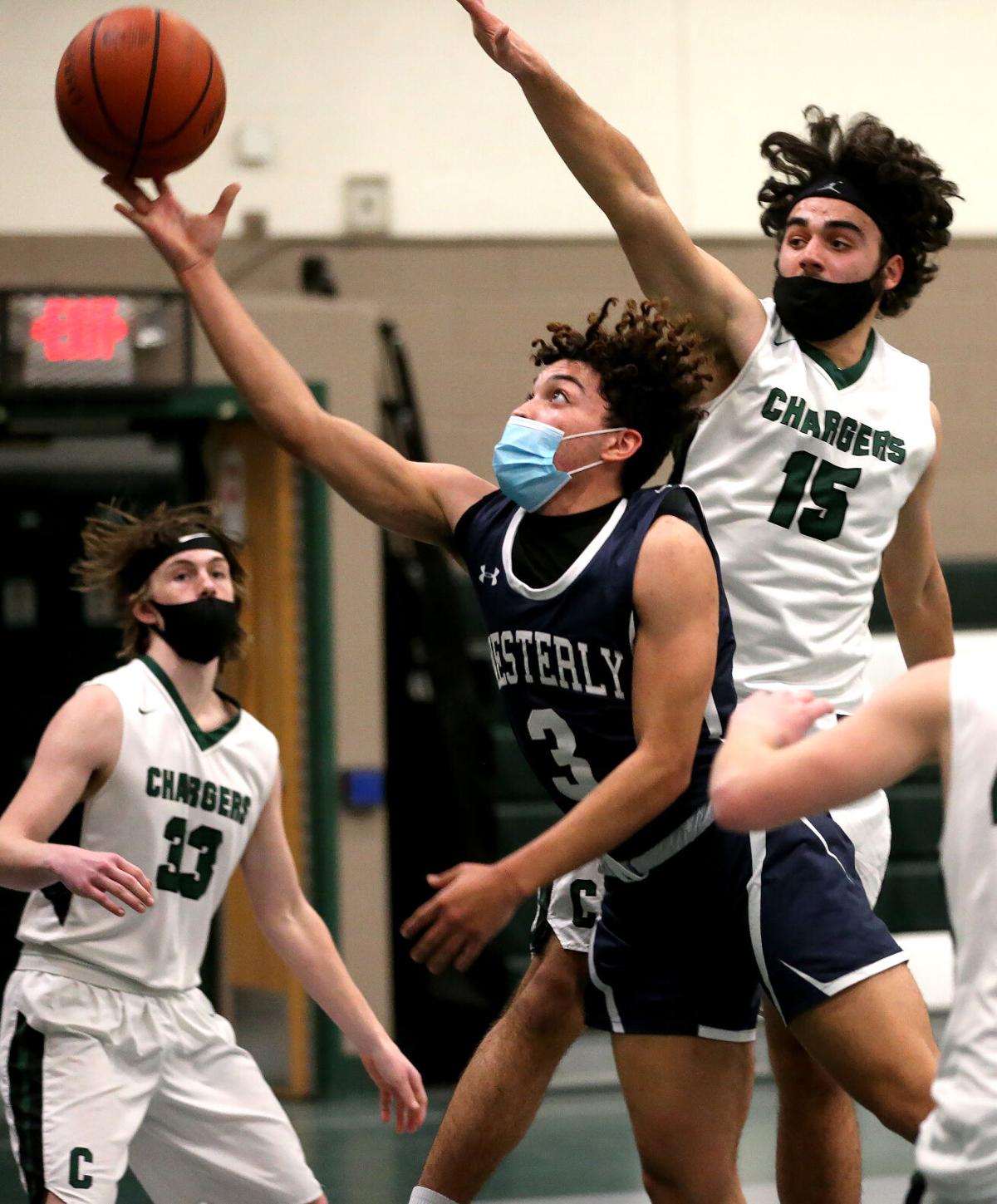 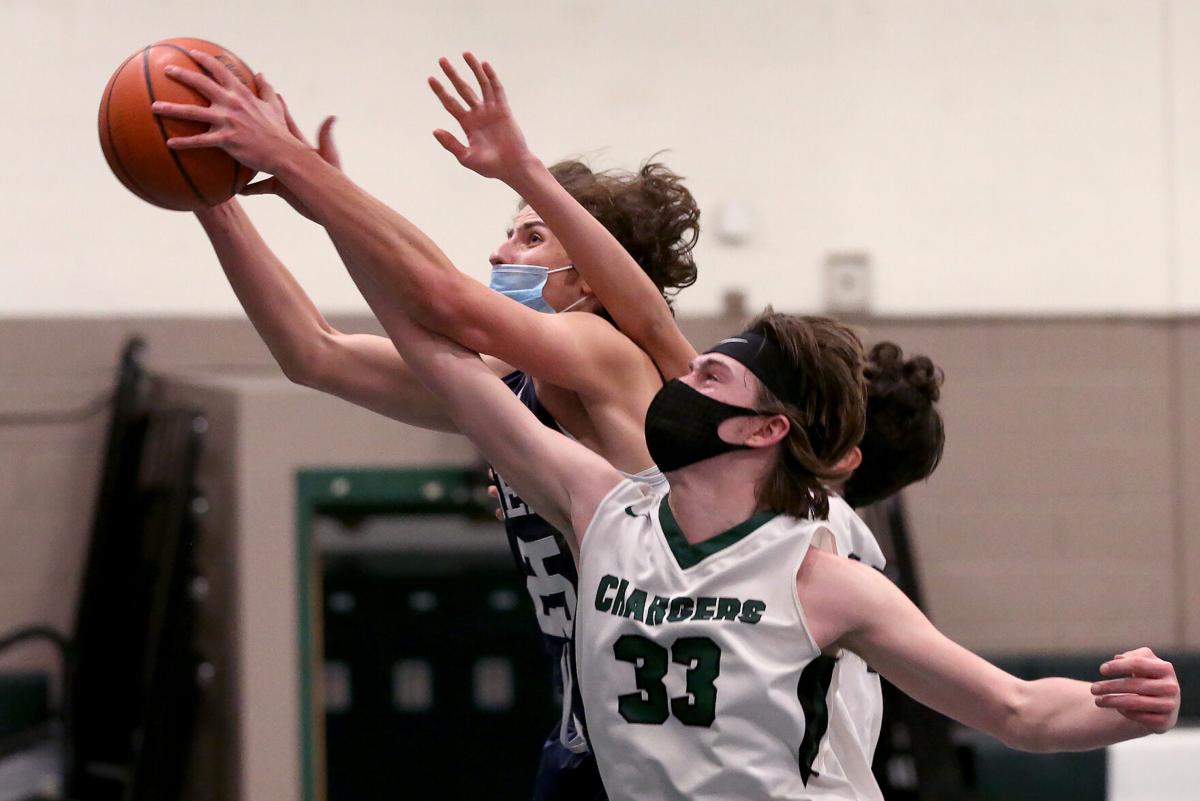 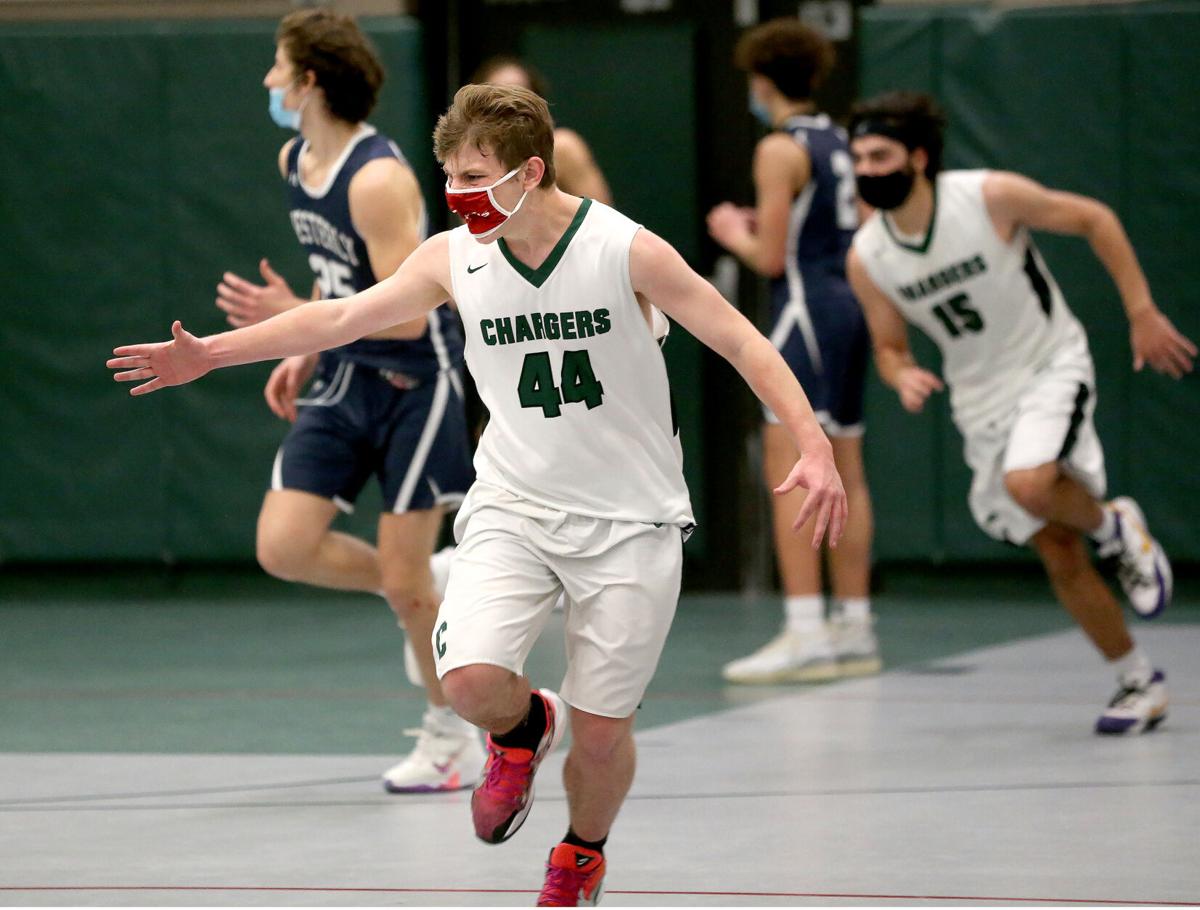 Chariho’s Nate Allen reacts after hitting a 3-pointer to give the Chargers a lead in the second half. Tim Martin, Special to The Sun

Chariho’s Jarrett Boisclair bring the ball up court against Westerly during the first half on Monday. Tim Martin, Special to The Sun

Westerly’s Ben Gorman (25) battles Chariho’s Kyle McGovern for a rebound during the second half on Monday. Tim Martin, Special to The Sun

Chariho’s Zach Boschwitz, left, battles Westerly’s Jesse Samo for a loose ball  during the second half. Tim Martin, Special to The Sun

Chariho’s Nate Allen reacts after hitting a 3-pointer to give the Chargers a lead in the second half. Tim Martin, Special to The Sun

When the freshman forward received it, he let go with a dagger 3-pointer to give the Bulldogs a six-point lead over the rival Chargers with 1:25 remaining.

Samo had dropped another 3-pointer from the left baseline just 25 seconds earlier to break a tie and he later added a free throw as the Bulldogs held on for a 65-60 boys basketball win over the Chargers.

It was another outstanding contest between the two longtime rivals.

"At that point in the game I was feeling it," said Samo, who finished with 17 points. "Coach tells me when I'm open to take the shot."

"That's what I like to see [from Samo]," Wilk said. "At the beginning of the season, he played scared in the first two games. But I told him he has the green light and he should take the shot."

Chariho still made it interesting.

Jarrett Boisclair hit a 3-pointer to pull the Chargers within three, 63-60, with 11.2 seconds left. But Westerly's Bryon Dunn converted a layup on a length-of-the-floor pass with 6.2 to go to put the game out of reach.

Wllk was a force himself, finishing with 26 points, including 11 in the first 3½ minutes of the game when the Bulldogs took a 13-0 lead.

He was able to drive to the basket hard and finish strong.

"It's hard to simulate that pressure in practice," Chariho coach Corey Downey said. "After that I thought we did a pretty good job."

In the third quarter, the Bulldogs appeared to take control for good, building a 17-point lead thanks to their pressure defense.

"When you get turnovers, it gets you going," Wilk said.

But Gleason had warned his team earlier in the game the Chargers would not go away.

"I told the guys in the first timeout of the game that Chariho isn't going anywhere," Gleason said. "They will get back in the game and they did. They are gritty and they have a lot of pride."

Chariho did get back in the game in a big way, outscoring Westerly 12-1 to close the third quarter to only trail 50-44.

Boisclair, who finished with 21 points, had a 3-pointer and a driving basket during the spurt.

"We started missing shots when they went zone and started settling for 3s in the third quarter and that led to layups on the other end," Gleason said.

Downey said the Chargers did a better job of contesting Westerly shots in the second half.

"It was too easy for them to get to the basket in the first half," Downey said.

Chariho continued to push and took its first lead of the game, 54-53, on a 3-pointer from deep in the right corner by Nate Allen with 4:16 left.

Chariho had outscored the Bulldogs 22-6 in a stretch that started in the third quarter.

"They just outscrapped us," Wilk said. "We were just playing lazy and they caught us in the fourth quarter."

Wilk later tied the game at 56 on a strong drive with 2:37, left setting up Samo's big moments.

Westerly freshman Ben Gorman had a number of big rebounds down the stretch and led the Bulldogs with seven for the game. Gorman also contributed seven points.

"I am really, really proud of the effort," Downey said. "The last 10 minutes of the game was our best basketball of the season. We settled down our minds and were able to be more physical."

Due to the pandemic, the game was played before no fans in a relatively silent Chariho gym, a stark contrast to the raucous atmosphere that usually accompanies games between the two schools, particularly at Chariho where the capacity is just 563 fans.

"We did miss that," Downey said. "The gym would have been shaking."

PHOTOS: Stalking the marshes for a meal near the COMO in Stonington

Fauci says U.S. is headed in ‘the wrong direction' in fight against coronavirus

At the Library: Books to beat the heat during the dog days