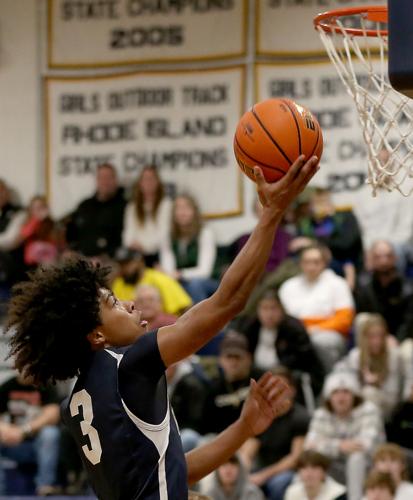 Westerly’s Romello Hamelin puts up two against South Kingstown in the consolation game of the WCCU Holiday Basketball Tournament on Friday, Dec. 30, 2022, at Westerly High. | Tim Martin, The Westerly Sun 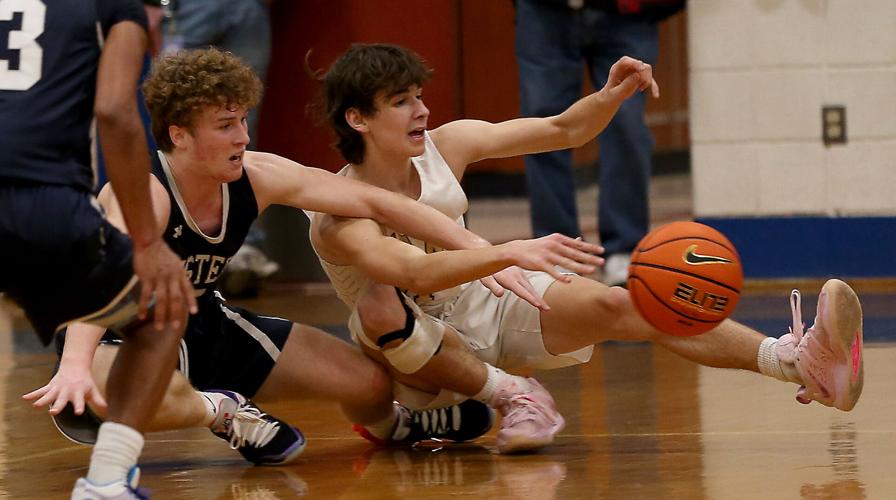 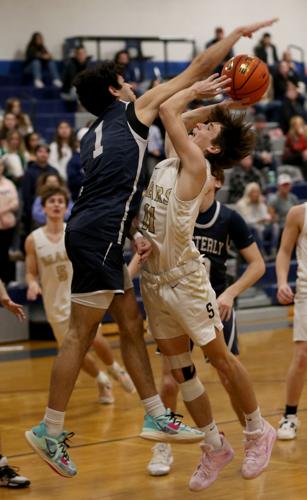 Stonington’s Robbie Scavello, right, is stopped by Westerly’s Jesse Samo (1) in the first half of the consolation game of the WCCU Holiday Basketball Tournament on Friday, Dec. 30, 2022, at Westerly High. | Tim Martin, The Westerly Sun 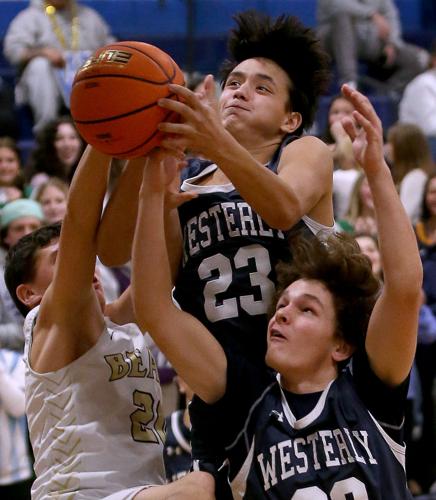 Westerly’s Romello Hamelin puts up two against South Kingstown in the consolation game of the WCCU Holiday Basketball Tournament on Friday, Dec. 30, 2022, at Westerly High. | Tim Martin, The Westerly Sun

Stonington’s Robbie Scavello, right, is stopped by Westerly’s Jesse Samo (1) in the first half of the consolation game of the WCCU Holiday Basketball Tournament on Friday, Dec. 30, 2022, at Westerly High. | Tim Martin, The Westerly Sun

WESTERLY — If there was any consolation about Westerly High's loss to Chariho two nights earlier — a defeat Bulldogs coach Mike Gleason called "the worst in his coaching career" — it was the fact that Westerly would ultimately meet Stonington in the boys WCCU Holiday Basketball Tournament's consolation game Friday.

The prospect of playing its archrival rejuvenated Westerly, which rebounded from an absurdly low total of 35 points against Chariho by defeating Stonington, 67-55, at Federico Gym. And the game wasn't quite as close as the score indicated.

"The consolation game is a tough game to play in, but it was helpful to play our rival and we responded with our best practice of the year and then our best game of the year," Gleason said. "We were tentative against Chariho but we were on the attack today. We'd like another shot against Chariho but that will only come in the State Open tournament. If we play like we did today, we should get there."

Westerly (5-2) broke open a 35-29 halftime lead by disrupting Stonington (3-3) with a full-court press and its man-to-man defense. Guard Lance Williams neutralized Bears leading scorer Luke Lowry, coming off his second 31-point game Wednesday, holding him to four first-half points. A succession of pressure-fueled turnovers, highlighted by the quick hands of Jesse Samo and Romelo Hamelin (five steals), spurred a 11-0 run to turn a 37-33 edge into a 48-33 margin.

For the second time in the tourney, Stonington unraveled against a press, stalling the early good vibes from its 3-1 start to the season. The Bears fell behind by 24, 65-41, early in the fourth quarter before Gleason pulled Samo (17 points), Hamelin (17) and the rest of his starters.

"We're in an identity crisis right now," Stonington coach Jay Wosencroft said. "We're trying to find out what team we want to be. The word is out now, you press Stonington and you can turn them over. We can't run and hide from it. We have to go to the drawing board and figure it out."

Stonington hung close in the first half, thanks largely to a career-best effort by 6-5 Brady Mullen, who gave the Bears an inside presence. He scored nine straight points late in the second quarter to bring the Bears within one, 30-29.

A Hamelin layup and Samo trey gave Westerly a 35-29 halftime lead. After Robbie Scavello's steal and layup brought the Bears to within 37-33 early in the third, Westerly's press broke the game open. The 6-foot-3 Samo collected his second dunk of the game in the run.

"I've never had two dunks in one game," Samo said. "This was a nice way to bounce back after the disappointing loss to Chariho. We were upset to not be in the finals but fired up to play Stonington."

Gleason called Williams' defense on Lowry "the key to the win." Lowry finished with 17 points but 13 came with the Westerly lead in double digits in the second half.

"I wanted to be 'that football guy' and stick to [Lowry] and annoy him," Williams said.

"[Lowry] makes them go, so we wanted to key on him," Gleason said. "It was a hard-earned four points in the first half. We played really well. At Stonington's first timeout, I told the kids we had more assists than we did the whole game against Chariho. We had great ball movement offensively."

Mullen was a Stonington bright spot. The senior big man, coming off an ankle injury, came off the bench for his most meaningful minutes to date, scoring all nine of his points in his personal second-quarter run. Aaron LoPresto scored 10 to join Lowry in double-figure scoring.

"I want to give Brady a shout-out," Wosencroft said. "He's worked his butt off to get where he is, scoring eight straight points for us to keep us in the game in the first half. He got gassed after that, but he's working his way into the rotation."

Samo led Westerly in rebounding with 10. Griffin Aldrich added eight and Williams had six boards to go with 13 points in a strong all-around effort.