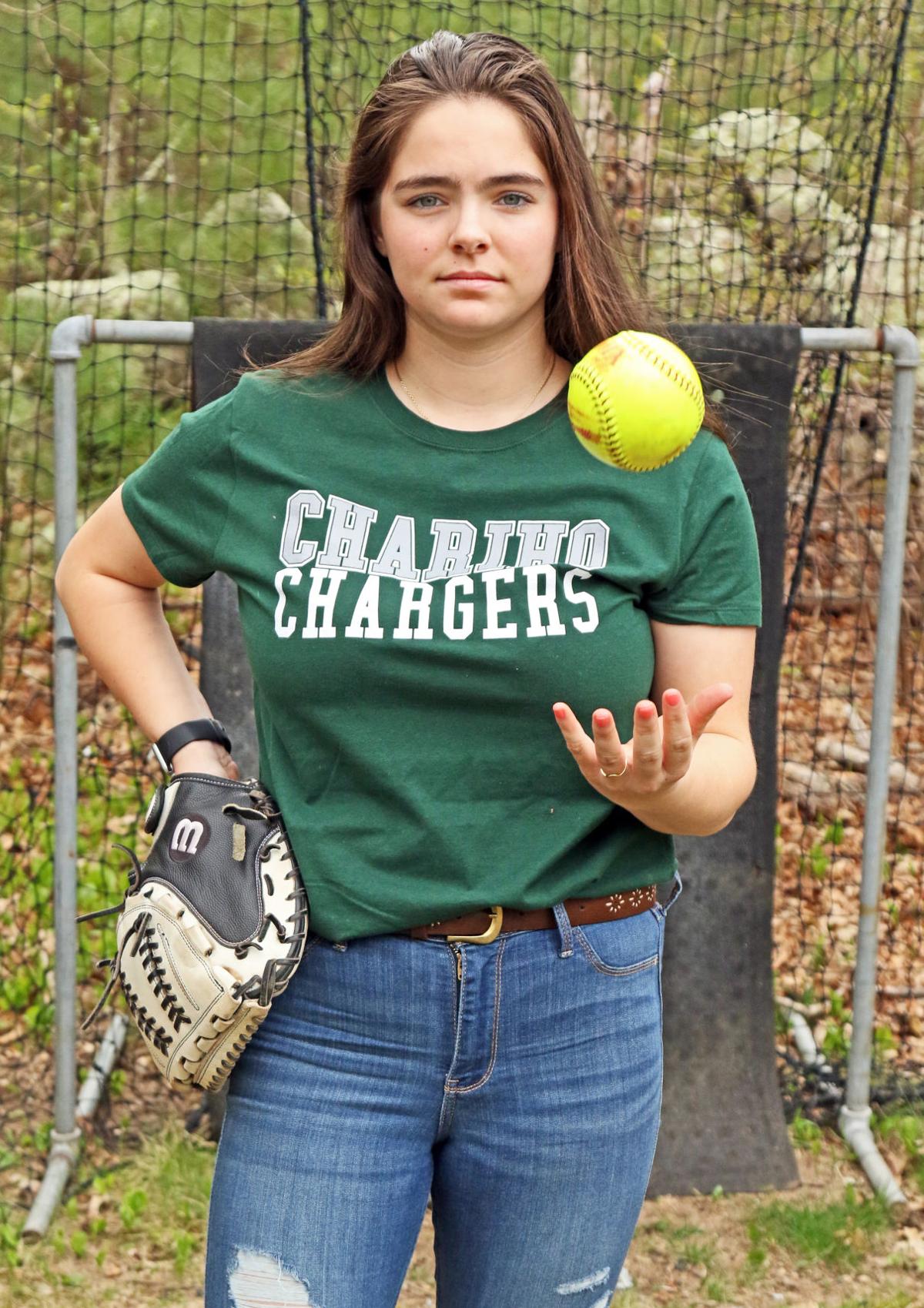 Chariho High’s Chloe Joslin was a third-team All-State selection last season as a catcher for the softball team. Joslin and fellow senior, pitcher Kate Powers, were hoping for big things this season for the team before the pandemic. But they miss their teammates as much as they miss the games. Harold Hanka, The Westerly Sun 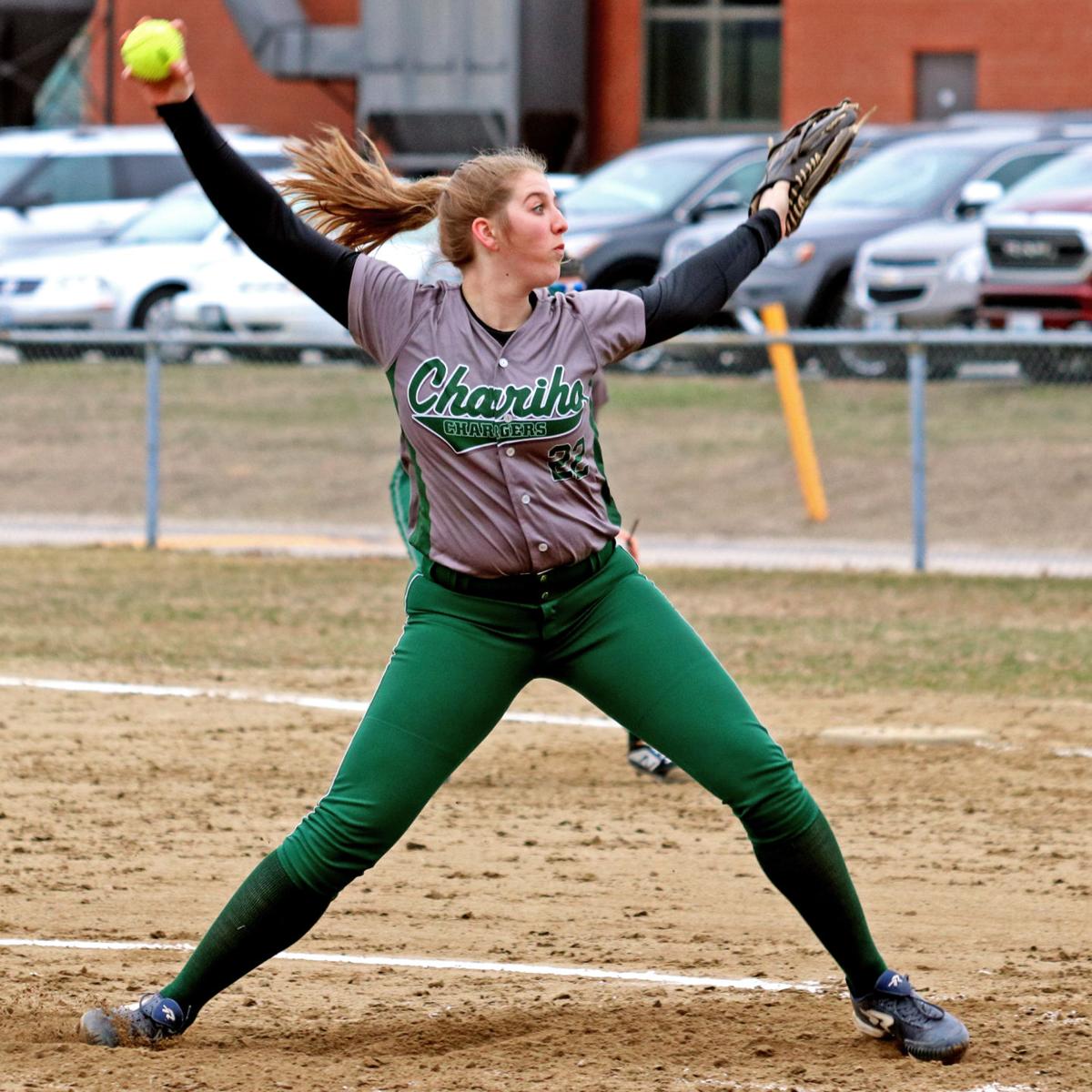 Chariho’s Kate Powers finished her career with 381 strikeouts and a career pitching record of 35-14. She was first-team All-State as a junior and second team as a sophomore. She had a career batting average of .372. | Harold Hanka, The Westerly Sun

Chariho High’s Chloe Joslin was a third-team All-State selection last season as a catcher for the softball team. Joslin and fellow senior, pitcher Kate Powers, were hoping for big things this season for the team before the pandemic. But they miss their teammates as much as they miss the games. Harold Hanka, The Westerly Sun

Chariho’s Kate Powers finished her career with 381 strikeouts and a career pitching record of 35-14. She was first-team All-State as a junior and second team as a sophomore. She had a career batting average of .372. | Harold Hanka, The Westerly Sun

The Chargers posted an overall record of 53-19 and advanced to the Final Four of the Division I tournament each of the past two seasons. Division I is the state's premiere division.

Five different players have earned All-State, three of them on the first team.

Yet, the team's top two seniors said what they will remember most about being a Charger is the time they've spent together, not the wins or losses.

The team gathers in a parking lot near the field each day before practice or a game to put on their cleats. It is a time to be together and share. The team then walks on a path down a hill to the field as a group.

"Before practice we would all hang out. Just being with the team is what I miss," senior catcher Chloe Joslin said. "And I just miss playing in general. I miss the games."

Kate Powers, the team's pitcher, agreed the time in the parking lot ranks among her best memories with the team.

"We would get there 15 minutes early and just talk. Then we would walk down the hill to the field together as a team, not on our own," Powers said.

She hit .418 last season with 19 RBIs and 33 hits. Powers, who scored 1,000 points and grabbed 1,000 rebounds in her basketball career, would have likely surpassed the 100-hit mark this season. She would have also recorded her 500th career strikeout.

Powers has other times she will remember.

"When the other team is taking batting practice we would sit in the right field corner in a circle and say something positive about what we wanted to do in the game," Powers said. "We always had a lot of fun in the dugout, too."

Joslin actually started as a baseball player, but by fourth grade she made the switch to softball, not an easy decision.

She calls all the pitches for Powers, a rarity in high school softball. Many times a coach will make those calls.

"Kate and I have that relationship," Joslin said. "I love being in control. And I like the big plays at home."

Powers said the two have built a good relationship since their days at Chariho Middle when the team won a state championship.

"She calls my games. We talk before the game about certain hitters we know about or ones we've played on travel teams with," Powers said. "She will call exactly what I want. And if I shake my head no, she knows the next pitch that I want. We have a really good connection.

Both players were hoping for another big season.

"I think we could have probably gone far in the playoffs and maybe even won it," Joslin said. "We lost some players, but we had good players coming in. It would have been exciting to see how the team would have formed up."

Powers, who will be playing at Division I Albany next season, said she was looking forward to this season.

"I was definitely devastated when I found out the season was canceled," Powers said. "This was the season I was looking forward to the most. Softball is my favorite sport. We had big goals this season. We won the state championship when we were in eighth grade. I thought I had another season with them."

In addition to their senior season, they will miss out on the typical events of senior year. Despite that, both players are trying to remain positive.

"I've been looking forward to walking across that stage at graduation since I was little," Powers said. "And everyone looks forward to senior prom. We never got to say our goodbyes.

"But you can't feel angry. You feel like it's not fair, but a lot of people have it a lot worse. We are hoping to find other ways for those things."

Joslin, who will be playing at Babson College next season, said she is trying to focus on moving forward.

Rhode Island added back to other states' travel advisory lists