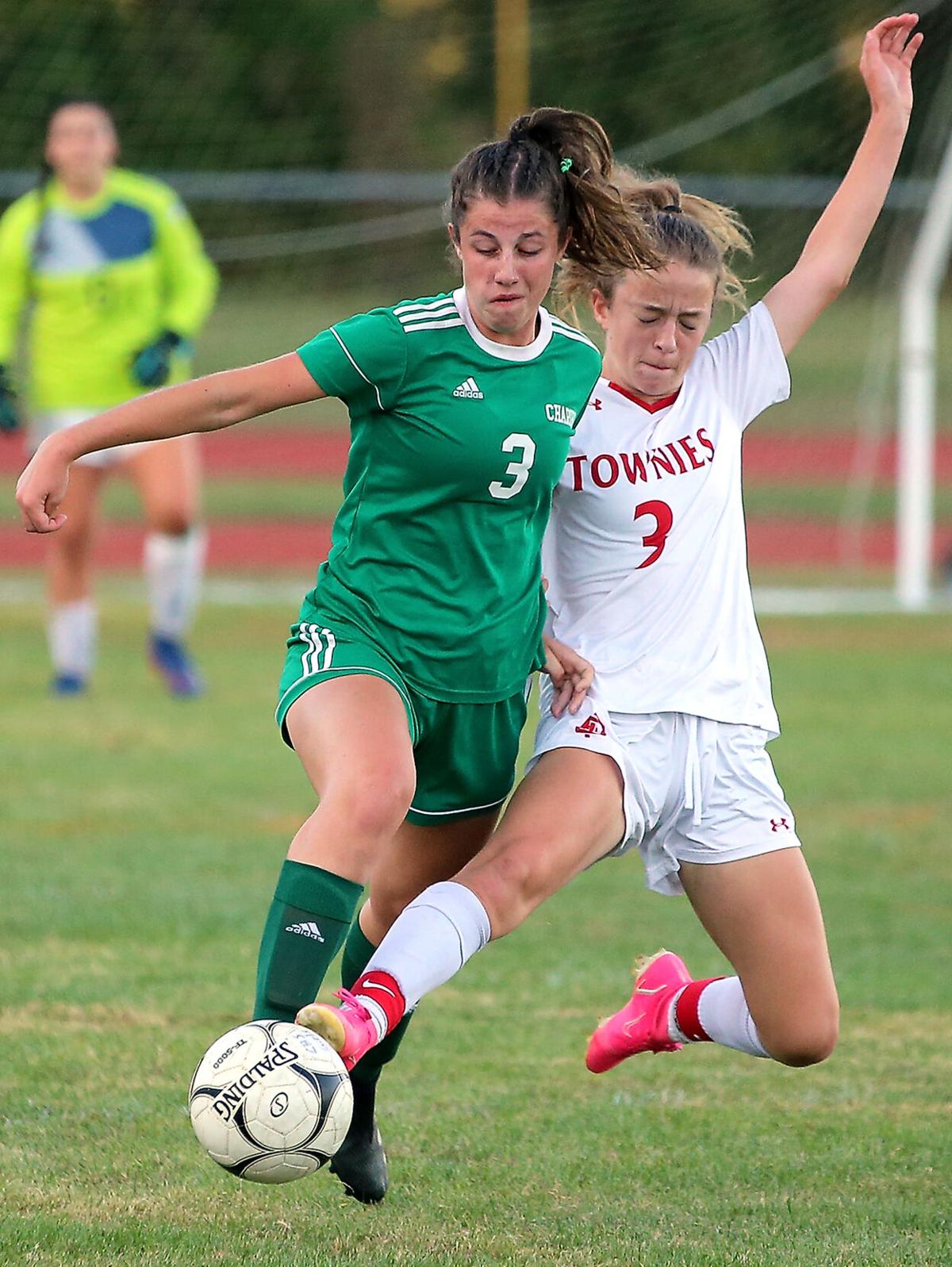 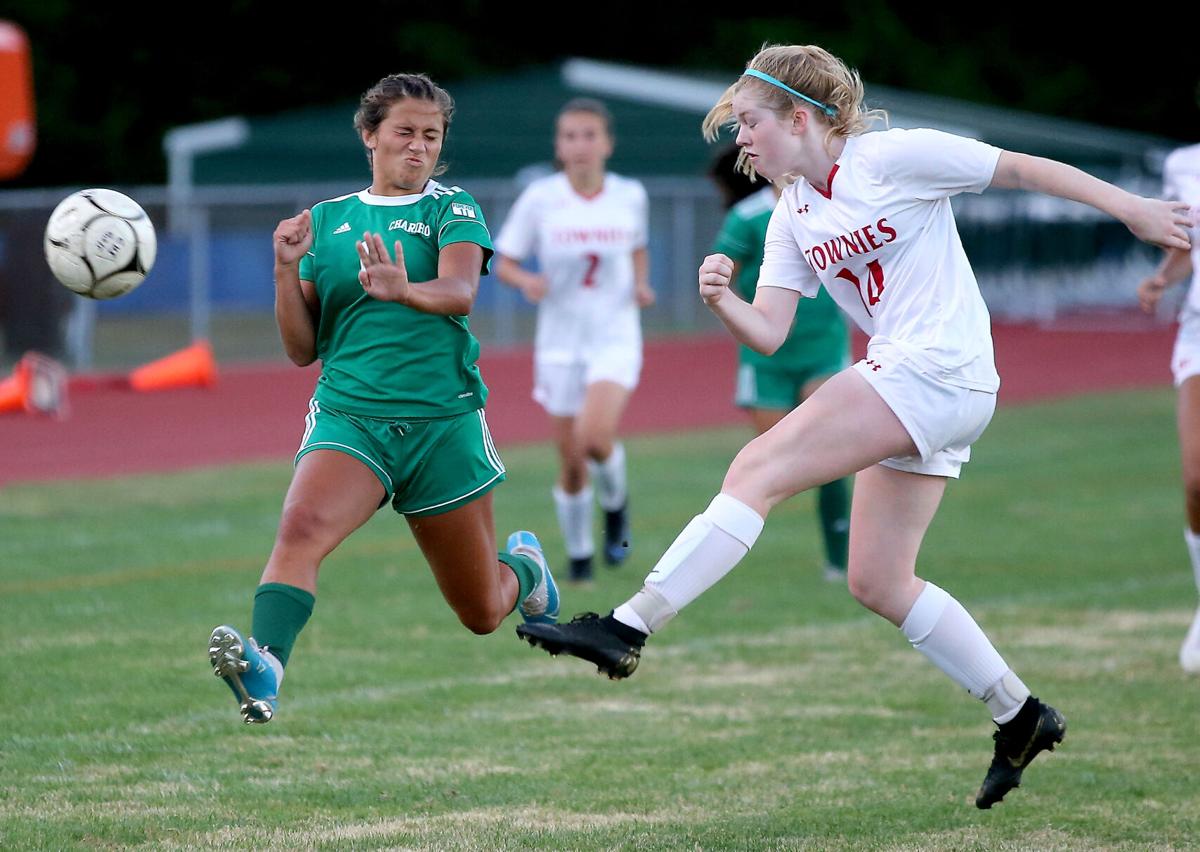 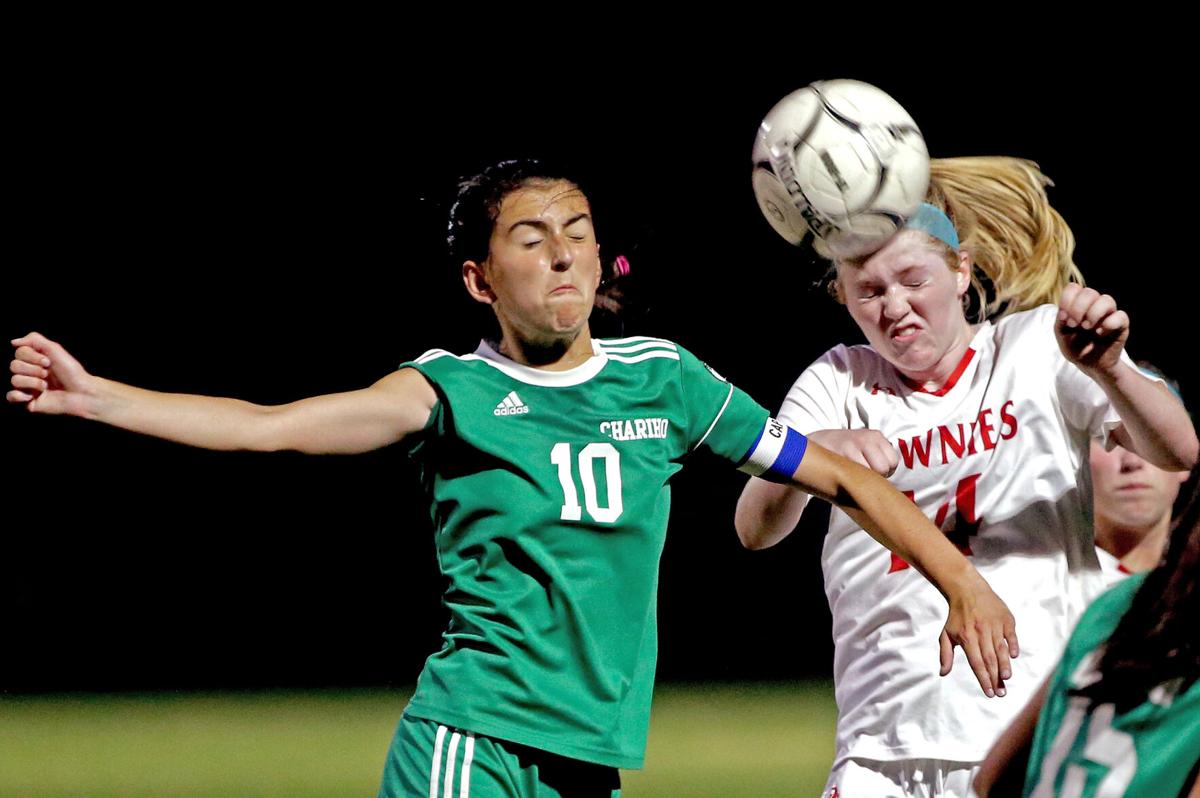 Chariho’s Eva Simmons (10) attempts to win a ball against East Providence’s Lily Budnick during the second half Monday. | Tim Martin, Special to The Sun 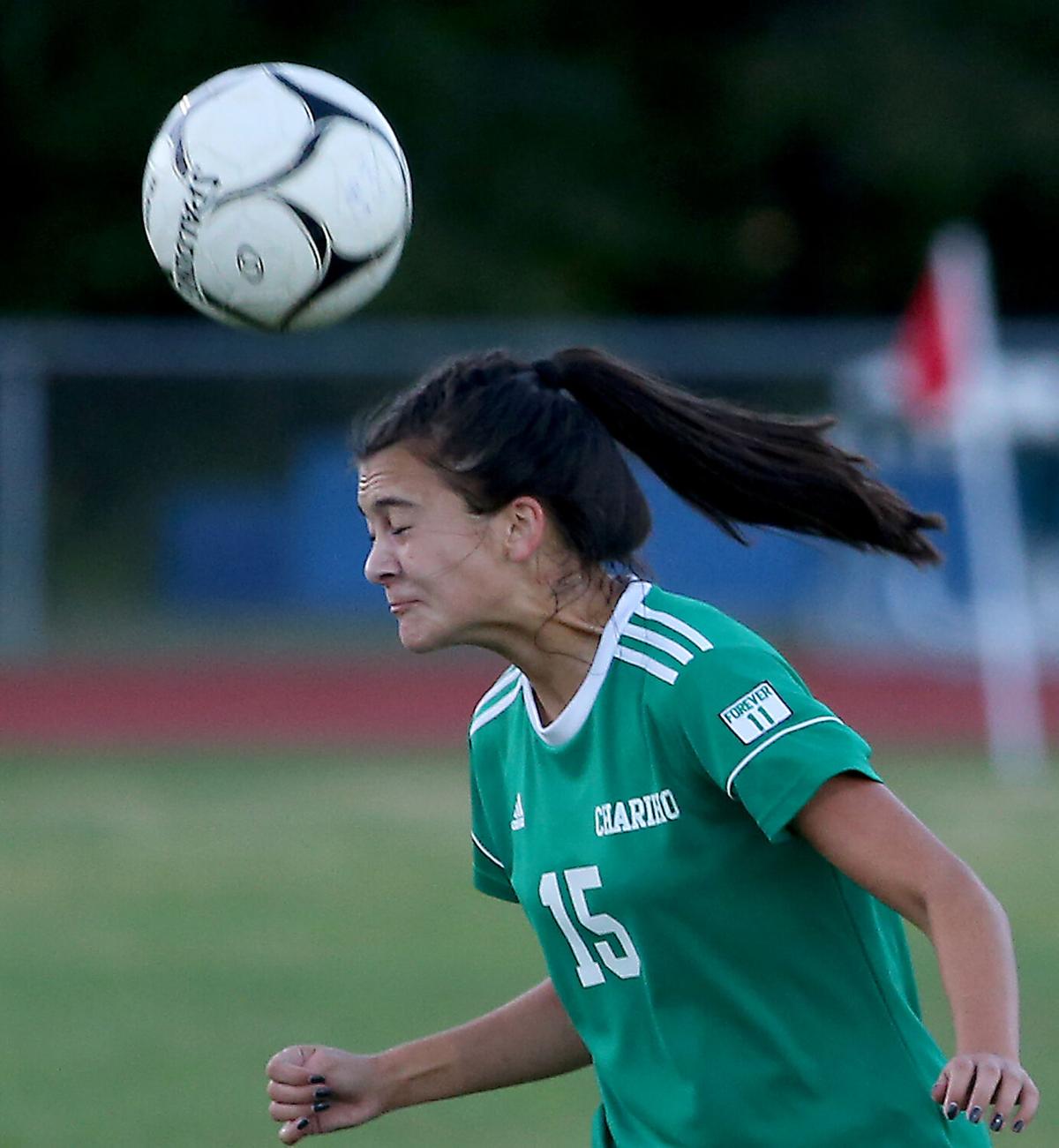 Chariho’s Rachael Abbott heads the ball during the first half against East Providence on Monday at Chariho High. | Tim Martin, Special to The Sun 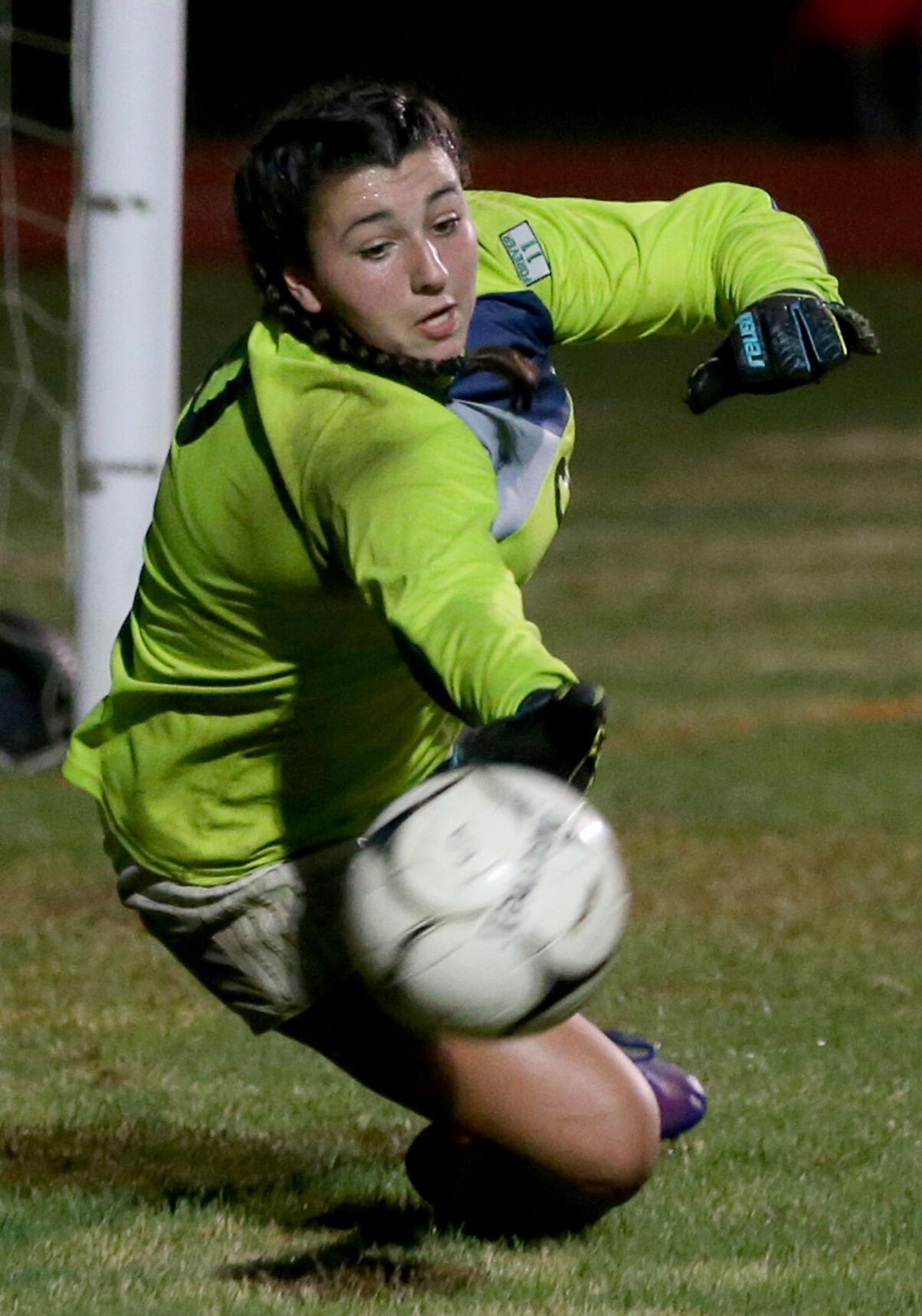 Chariho goalie Reid DosSantos deflects a shot during the second half against East Providence on Monday during the Chargers' 3-1 win. | Tim Martin, Special to The Sun 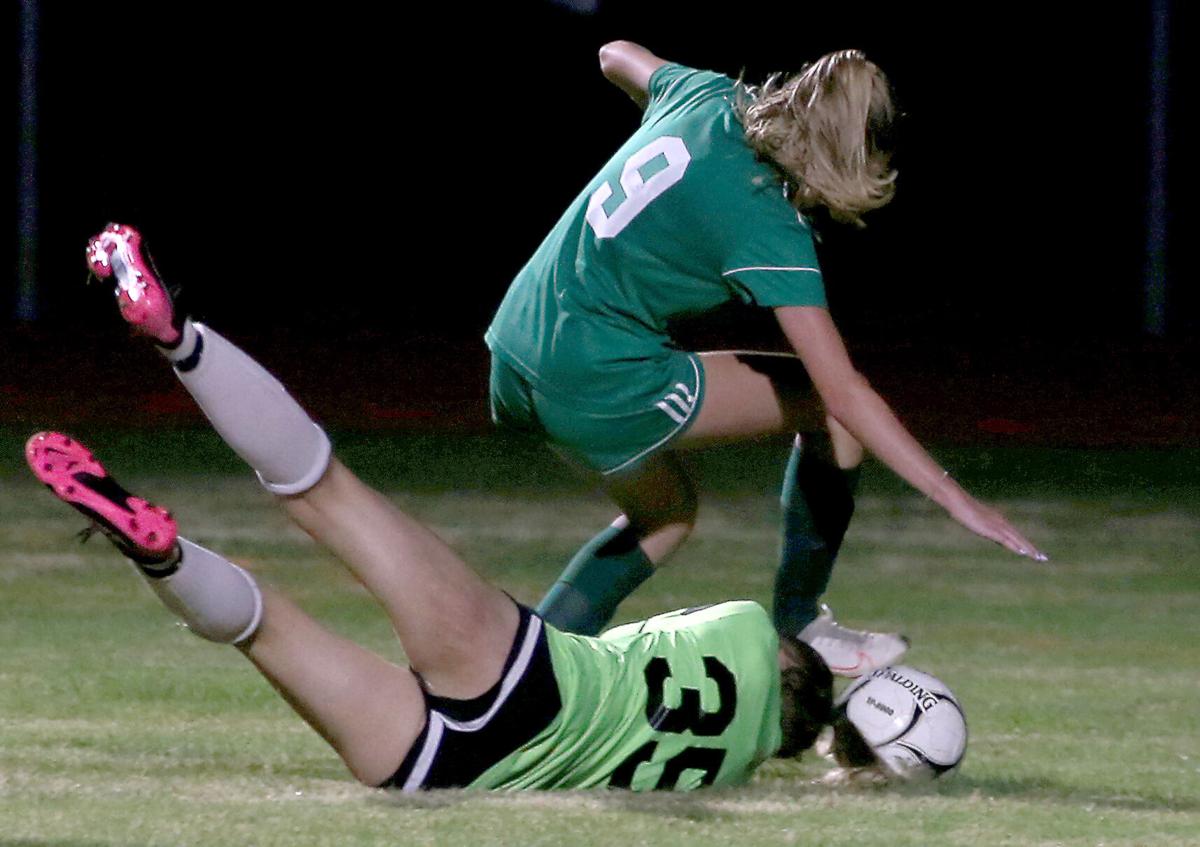 Chariho’s Brooke Kanaczet (9) gets the ball past outstretched East Providence goalie Kay Lee Davenport during the second half Monday at Chariho High. | Tim Martin, Special to The Sun

Chariho’s Eva Simmons (10) attempts to win a ball against East Providence’s Lily Budnick during the second half Monday. | Tim Martin, Special to The Sun

Chariho’s Rachael Abbott heads the ball during the first half against East Providence on Monday at Chariho High. | Tim Martin, Special to The Sun

Chariho goalie Reid DosSantos deflects a shot during the second half against East Providence on Monday during the Chargers' 3-1 win. | Tim Martin, Special to The Sun

Chariho’s Brooke Kanaczet (9) gets the ball past outstretched East Providence goalie Kay Lee Davenport during the second half Monday at Chariho High. | Tim Martin, Special to The Sun

WOOD RIVER JCT. — Ryann Denecour was the subject of significant conversation within the soccer community long before arriving at Chariho High this season as a freshman.

During her middle school years, some knowledgeable soccer people suggested Denecour could have started for the Chargers squad that finished runner-up in Division II in 2019.

Now, Denecour is delivering on that speculation. She scored a pair of goals Tuesday night as the Chargers turned back East Providence, 3-1.

For the season, she is tied for the team lead in goals with seven and leads the team with nine assists in five games. She missed the 3-0 loss to Stonington in the Piver Cup championship game Saturday, nursing an injury to her left ankle.

She had it wrapped in ice following Tuesday's win. But the transition to high school has still been smooth.

"I have been playing up with my sister [senior Brianna Denecour] on our club team and it has made me such a better player," Denecour said. "When I got to the high school level I thought I was ready, and when I got to the first game I was a little nervous. But I just came out and did what I had to do and my teammates supported me."

Denecour said the support has been crucial to her early success.

"Whatever I do they support me and it really helps to know they are supporting you. They love you. It's like a family," she said.

Denecour has superior foot skills and good speed. She is strong and has the ability to finish. She also understands the tactics of the game. The Chargers are a different team with her on the field.

"It's just not the skill. She has the work ethic, too," Chariho coach Brittney Godbout said. "Her and Eva Simmons work well together in the midfield. They really set the tone for intensity and work ethic."

After a scoreless first half, Denecour scored the game's first goal with 19:21 remaining. The play started when an official called a foul.

A player from each team went down on the call and players from both teams appeared to be confused, uncertain which team was being called for the foul. It was East Providence.

The Chargers took advantage of the confusion. Bella Pezzullo quickly set the ball down a few yards from the right sideline and just beyond midfield. She played a ball quickly ahead to Denecour.

"Ryann and I had the same idea. We didn't really waste time on the drama of it. We used it to our advantage because we knew no one was paying attention," Pezzullo said.

"I ran onto it and the goalie didn't have enough time to get to it. She was very, very close though," Denecour said.

Denecour was the able to push the ball to her left past a diving Davenport and scored from a few yards way into an empty net.

Denecour scored again with 14:10 remaining following a scramble in front of the EP net after a Pezzullo corner kick. Brooke Kanaczet played the ball to Denecour for the score.

East Providence (4-2, 3-2 Division II) closed within a goal just over a minute later when Jordyn Brogan scored with 13:01 left.

Pezzullo scored Chariho's final goal with 11:20 left. Kanaczet, who had two assists, crossed the ball from the left corner. The bouncing ball was too high for Denecour to get a foot on, but the right-footed Pezzullo hammered it home with her left foot from about 12 yards out.

"Coach always tells us to make that back-post run," Pezzullo said. "That is why we always attack in numbers."

Chariho goalie Reid DosSantos had a number of big plays for the Chargers in the second half. She snared a flare off a tricky EP header. She also caught a strong cross from close range. Late in the game she stopped another hard shot and dove on the loose ball just seconds before an East Providence player arrived.

"This was probably the best game she's had all season," Godbout said. "She has been struggling with when to stay and when to come out. She came out really good tonight and made some great saves. East Providence is a really good team. This was our best win so far."

Chariho played without Tessa Azzinaro, who left the Stonington game with an injury. She has scored seven goals this season.

Godbout and the Chariho players talked about giving "111 percent" in their postgame comments, serving as a tribute to former player Maddie Potts, who died after being stricken with a brain aneurysm during a game at Chariho four years ago.

"That's how we define the Maddie mentality," Godbout said. "She didn't give 100 percent. She gave 111 percent."