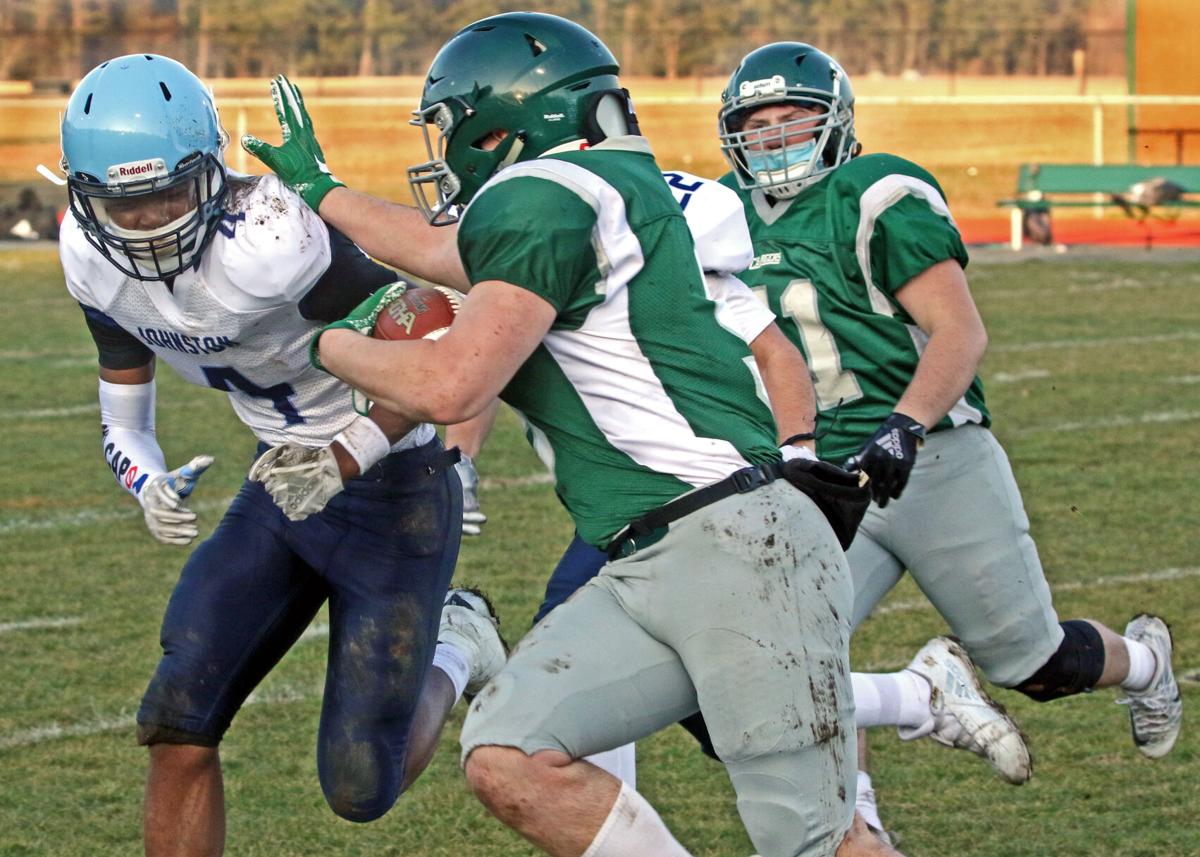 Chariho's Rogan Wotherspoon reaches out to stiff-arm Johnston's Deremy Stubbs on a long gain during the first half Friday. | Harold Hanka, The Westerly Sun 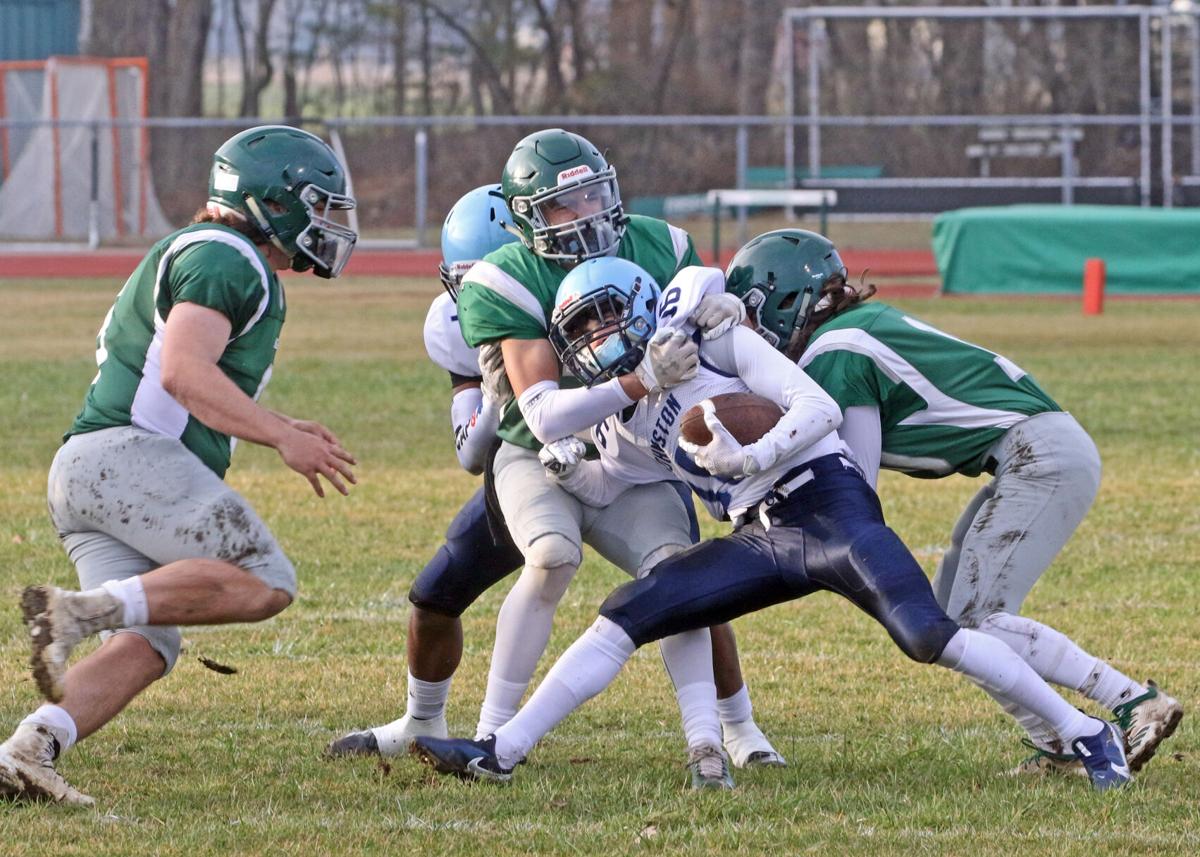 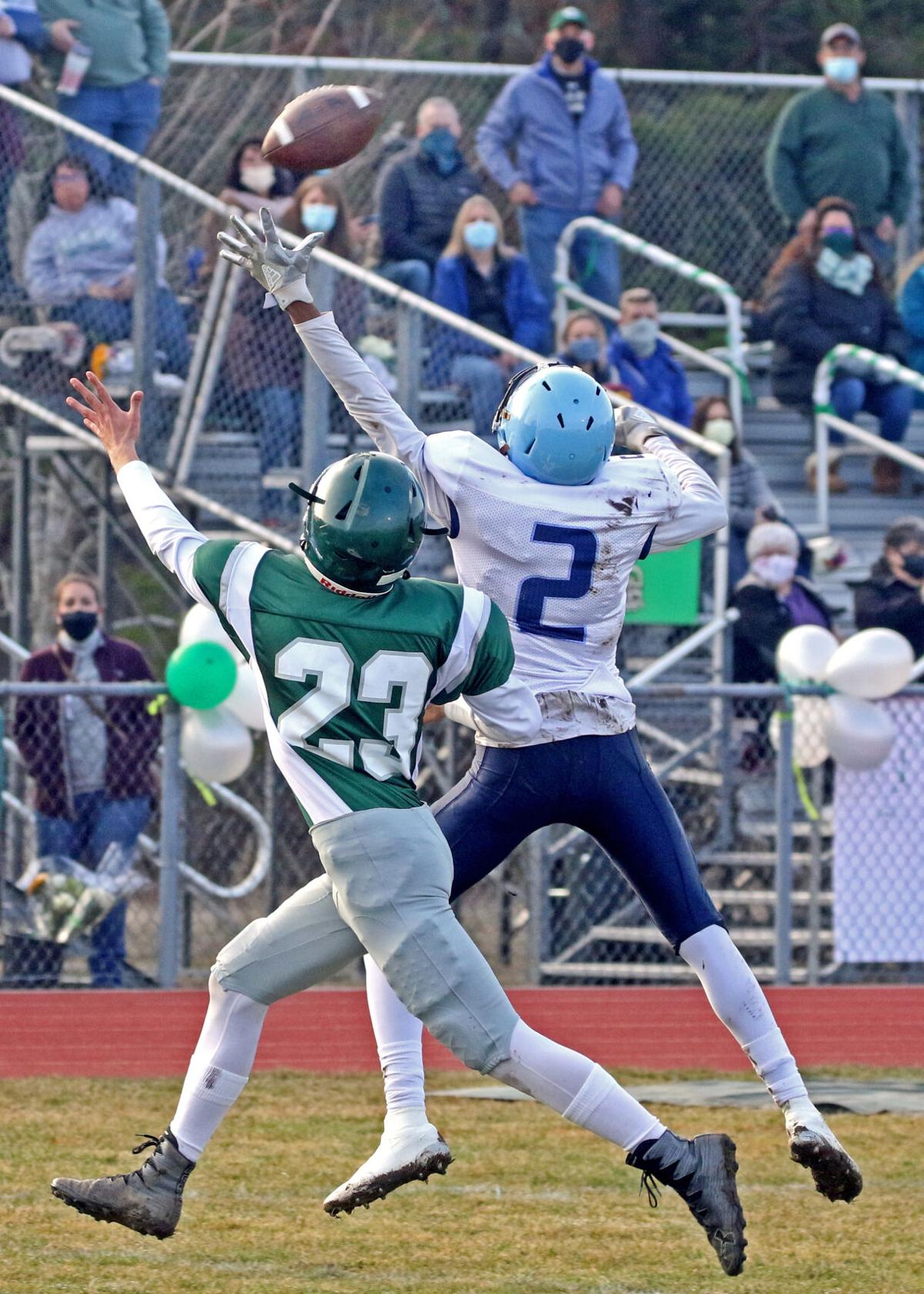 Johnston's Dillon Stubbs deflects a pass away from Chariho's Nick Corrente in the first half Friday. | Harold Hanka, The Westerly Sun 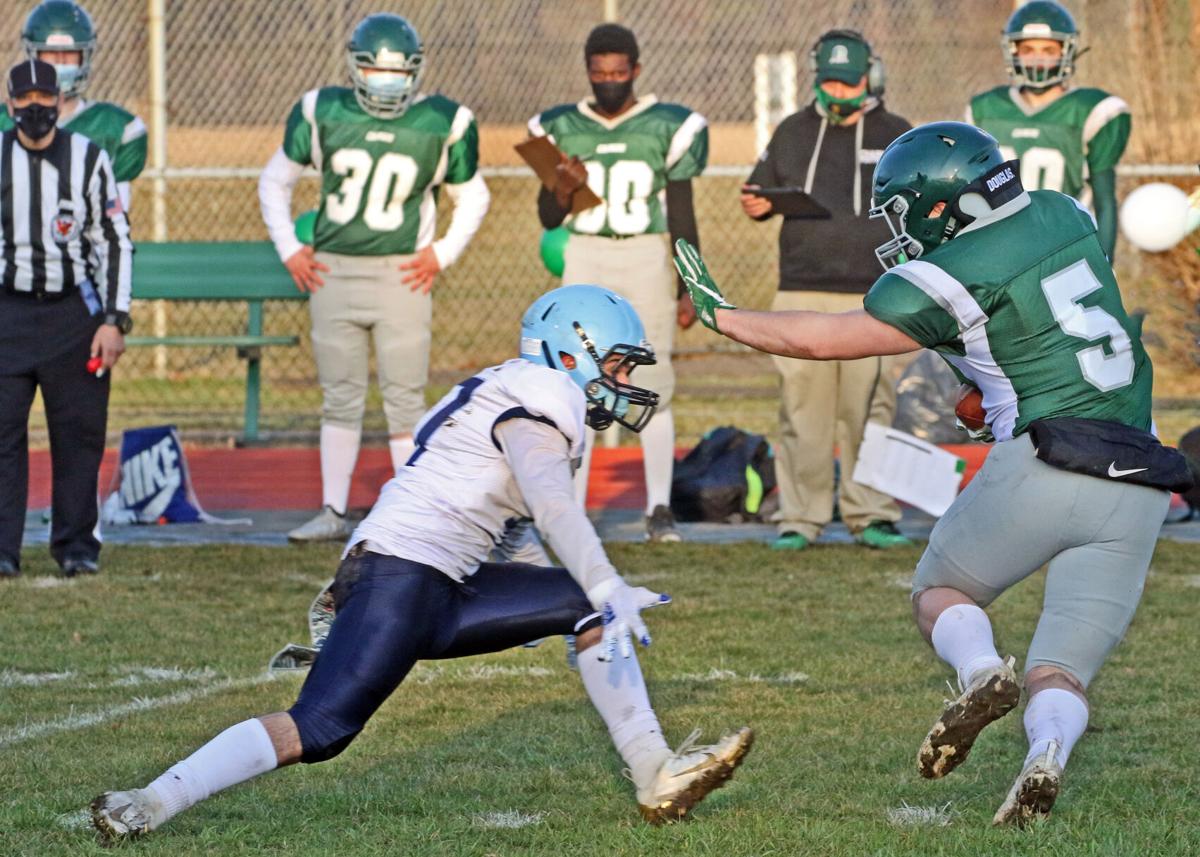 Chariho running back Rogan Wotherspoon tries to elude a Johnston defender during the first half. | Harold Hanka, The Westerly Sun 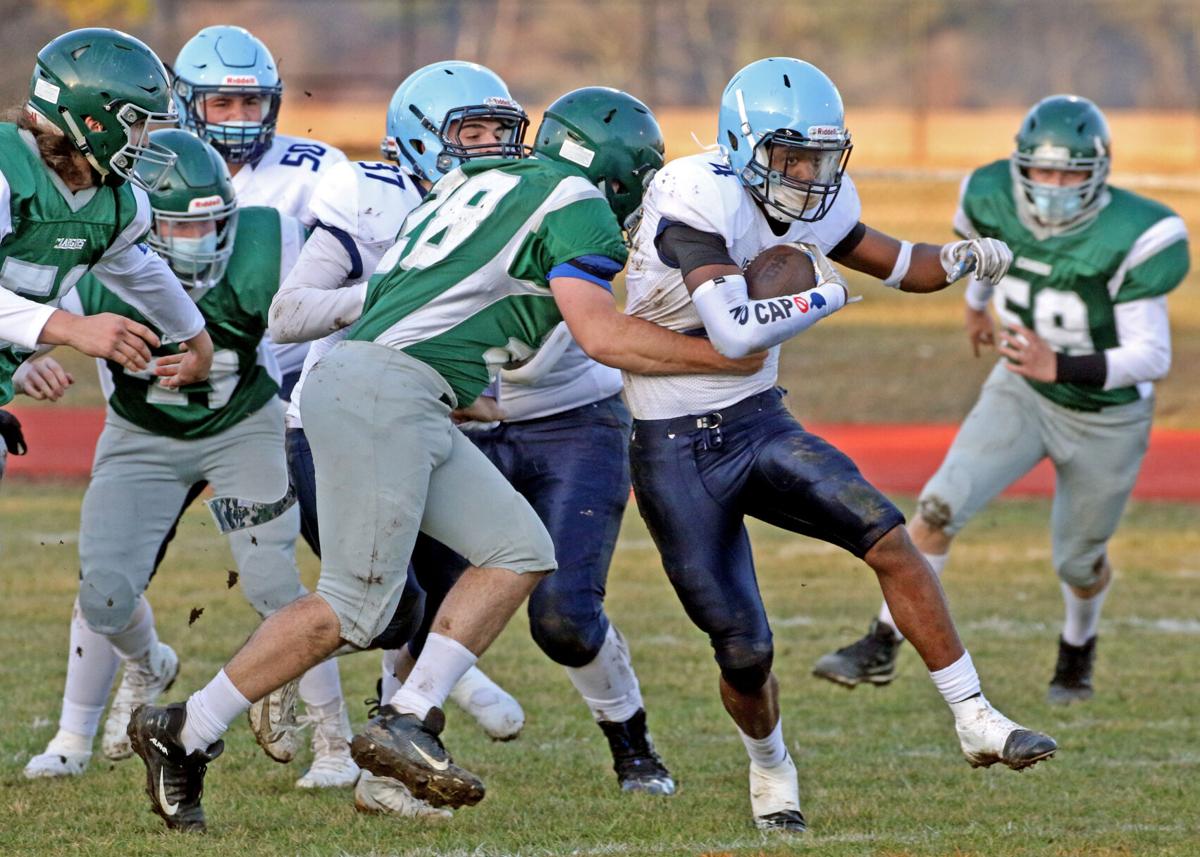 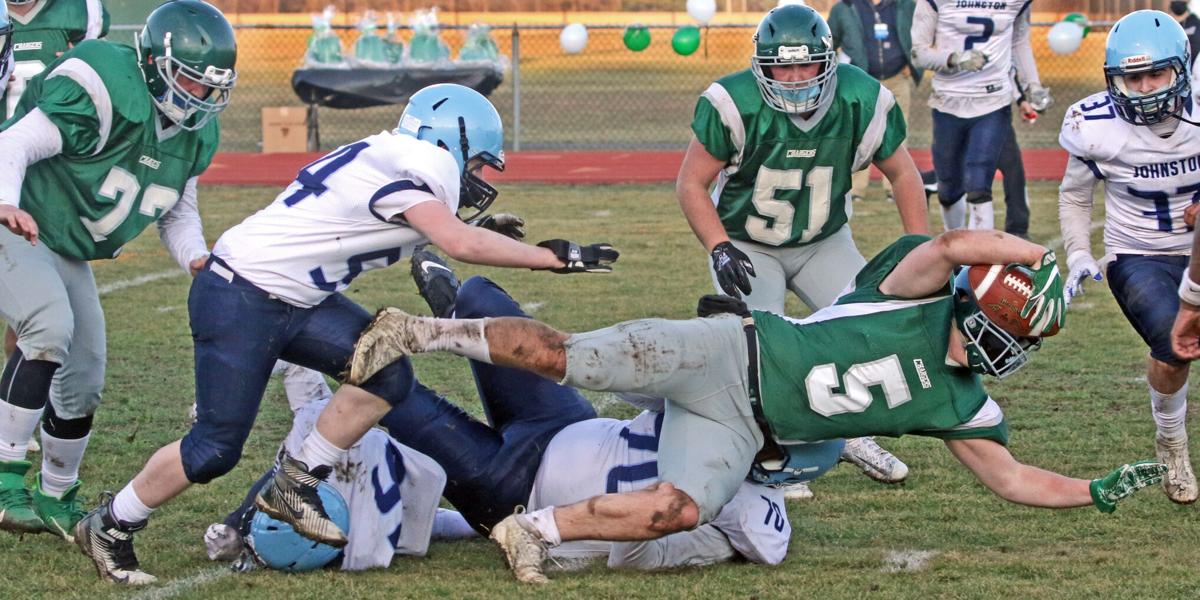 Chariho's Rogan Wotherspoon reaches out to stiff-arm Johnston's Deremy Stubbs on a long gain during the first half Friday. | Harold Hanka, The Westerly Sun

Johnston's Dillon Stubbs deflects a pass away from Chariho's Nick Corrente in the first half Friday. | Harold Hanka, The Westerly Sun

Chariho running back Rogan Wotherspoon tries to elude a Johnston defender during the first half. | Harold Hanka, The Westerly Sun

WOOD RIVER JCT. — Chariho High's football team had Johnston in a bind about midway through the fourth quarter of Friday's season-opening game for both teams.

The Panthers were facing a second down and 24 from Chariho's 45-yard line with about seven minutes left in the contest and the game tied.

It appeared Chariho might get good field position if its defense could hold.

After an incompletion on third down, Remington found Deremy Stubbs wide open in the end zone for a 28-yard scoring pass on fourth down with 5:35 left that proved to be the decisive score in a 15-7 Division III win.

"They did a good job on that call, the throwback screen. And on fourth down, one of our young safeties bit on a fake and that was why he was wide open in the end zone," Chariho coach Nick Russo said.

Remington also completed a conversion pass to Dillon Stubbs after the final touchdown to make it 15-7.

"I thought we did a great job, showed a lot of character fighting all the way to the end," Johnston coach Joe Acciardo said. "We've had some situations before where the other team went up or we got into a battle and things didn't go our way."

After the score, Chariho could not produce a first down and turned the ball back to the Panthers with about three minutes left at the Charger 15.

A holding penalty on the first play after the change of possession set the Panthers back. Two running plays produced just 7 yards, but did cause Chariho to use two of its three timeouts.

On third down, Johnston surprisingly threw a pass that Chariho's Nolan Murphy intercepted in the end zone. Acciardo said the play was designed to be a run, but that's not what happened on the field.

After an incompletion, Chariho receiver Caleb Maggs made an excellent grab of a throw from Boschwitz. The pass was tipped by a Johnston defensive back and Maggs had to tip it to himself before gaining control.

The completion gained 22 yards and put the ball on the Johnston 20 with just over a minute remaining.

Chariho spiked the ball on its next play. But on second down, Dillon Stubbs intercepted a pass at the goal line to seal Johnston's win. Chariho had difficulty getting into the correct formation before the ball was snapped, which appeared to affect the timing of the play.

"Overall, I'm proud of the effort, but we just didn't execute," Russo said.

"We were very sloppy. I thought we had a really good week of practice, but it didn't translate as well as we thought. And they executed when they had to and that's why they won."

Johnston scored first on a 20-yard pass from Remington to Acciardo with 6:48 left in the first quarter. Acciardo, a shifty receiver, went low to come up with the grab.

Chariho answered in the second quarter when Wotherspoon scored on a 2-yard run over the left side. The scoring play capped a seven-play, 64-yard drive. Wotherspoon had a 15-yard run during the possession, and Boschwitz found Maggs all alone down the right sideline for a 35-yard gain.

The drive was set up by Josh Pater's recovery of a Johnston fumble. Ethan Sargent also had an interception for the Chargers.

Midway through the second quarter, a player from each team was ejected after a scuffle.

Chariho next travels to Coventry for a noon game on Saturday.