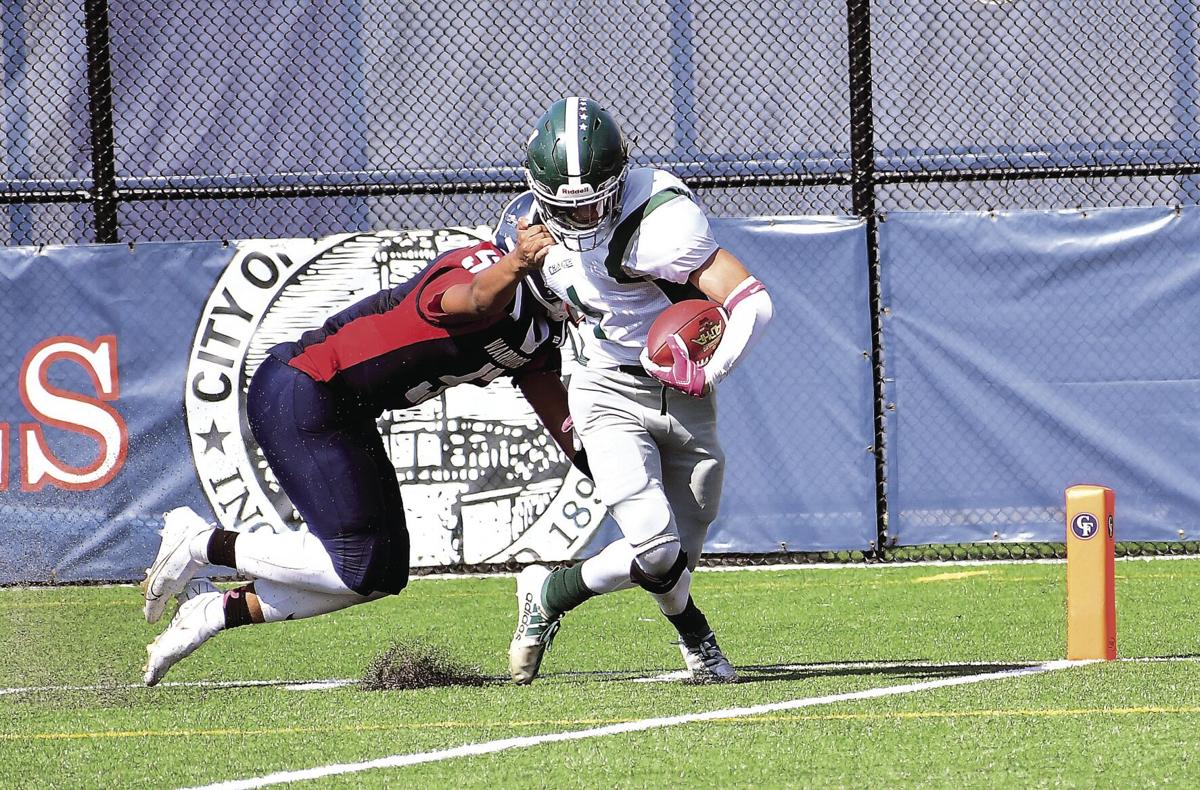 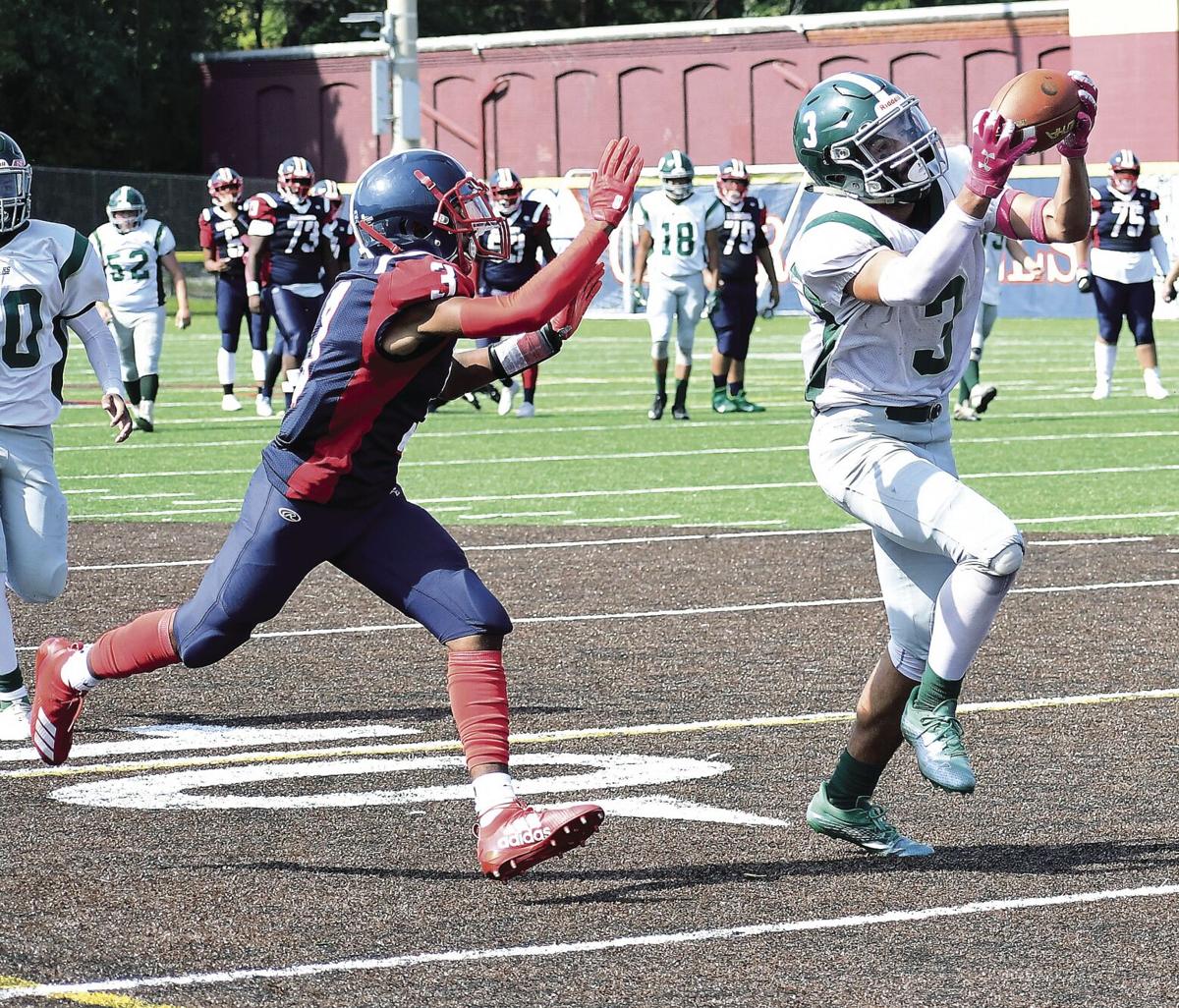 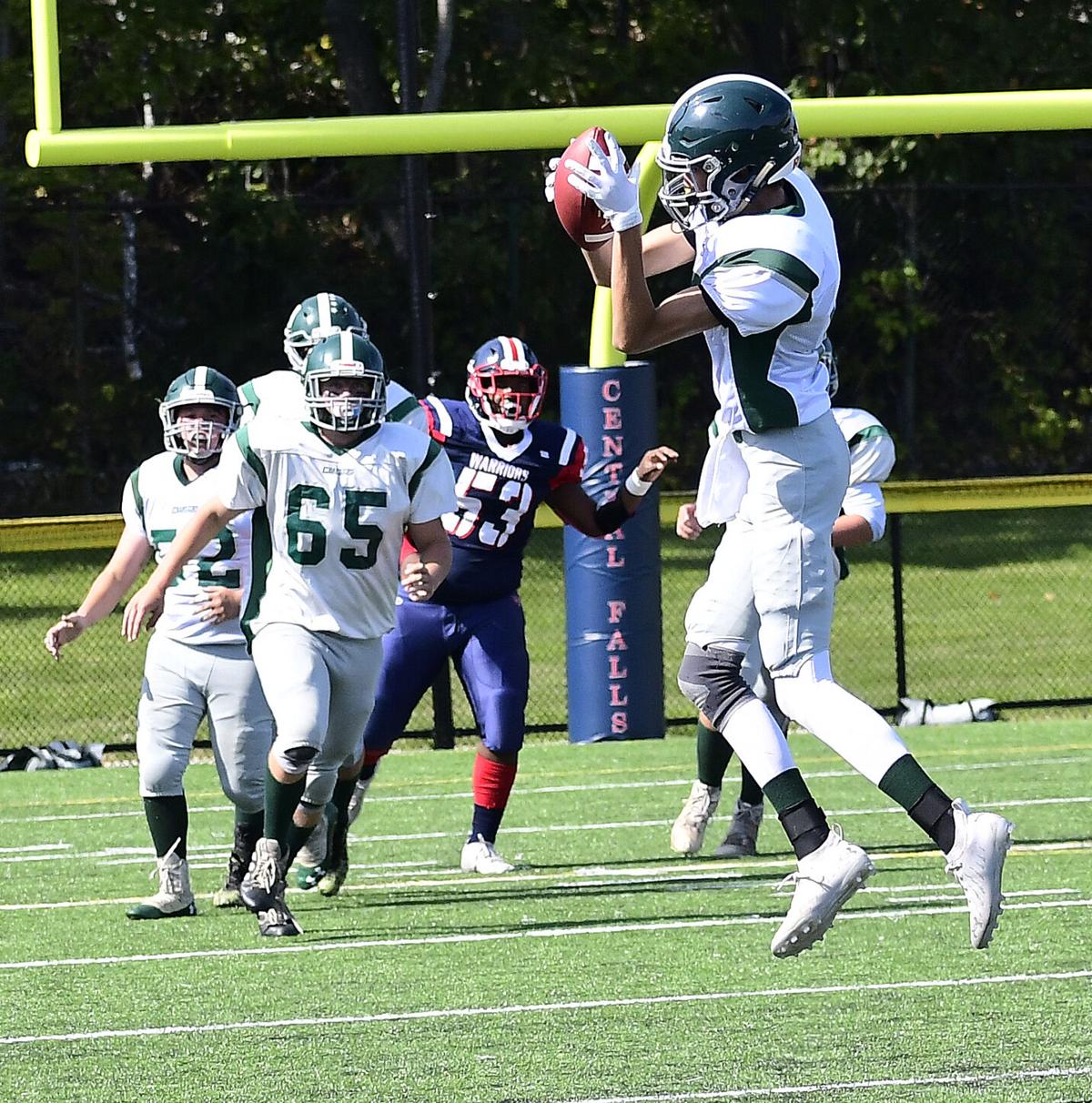 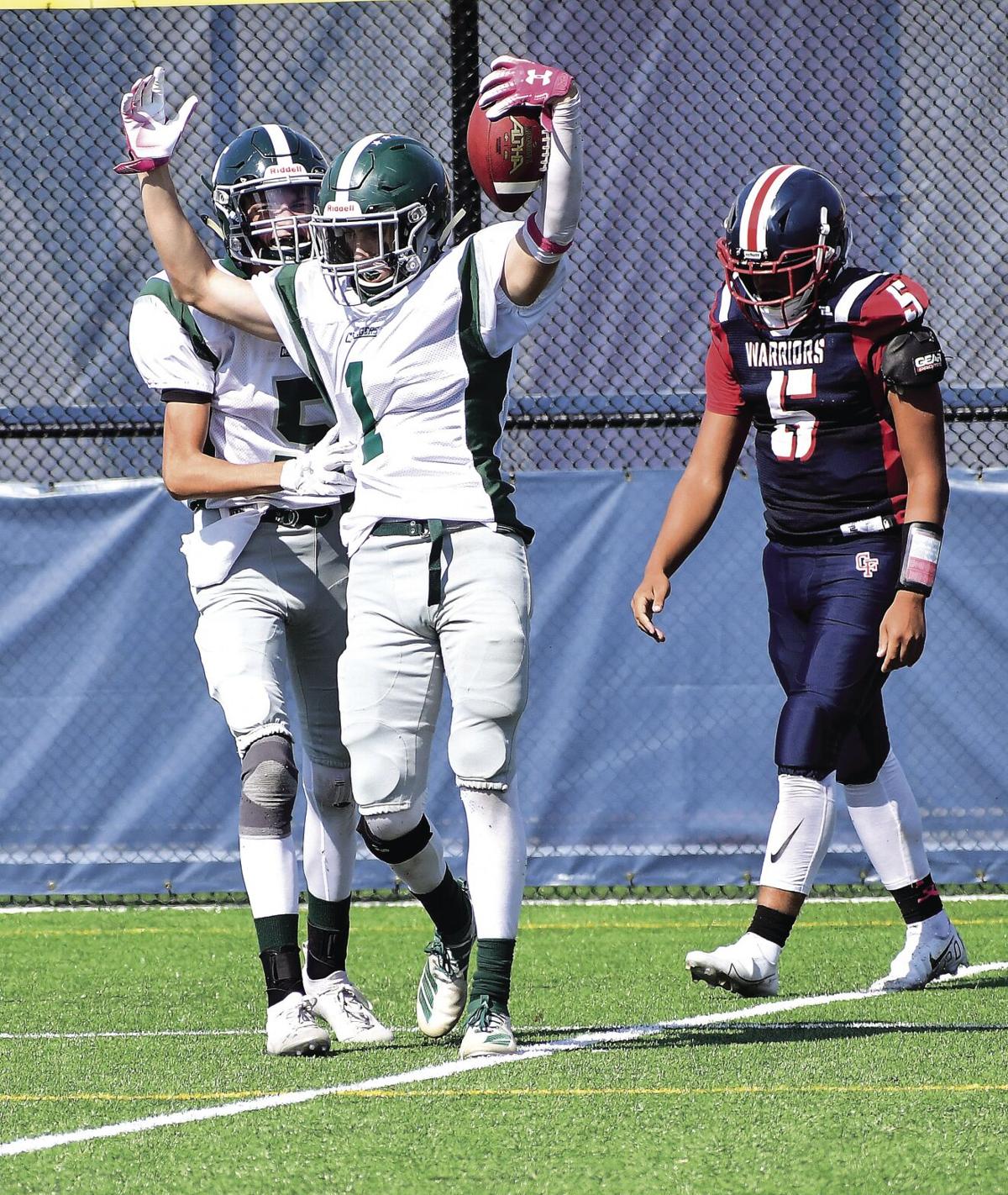 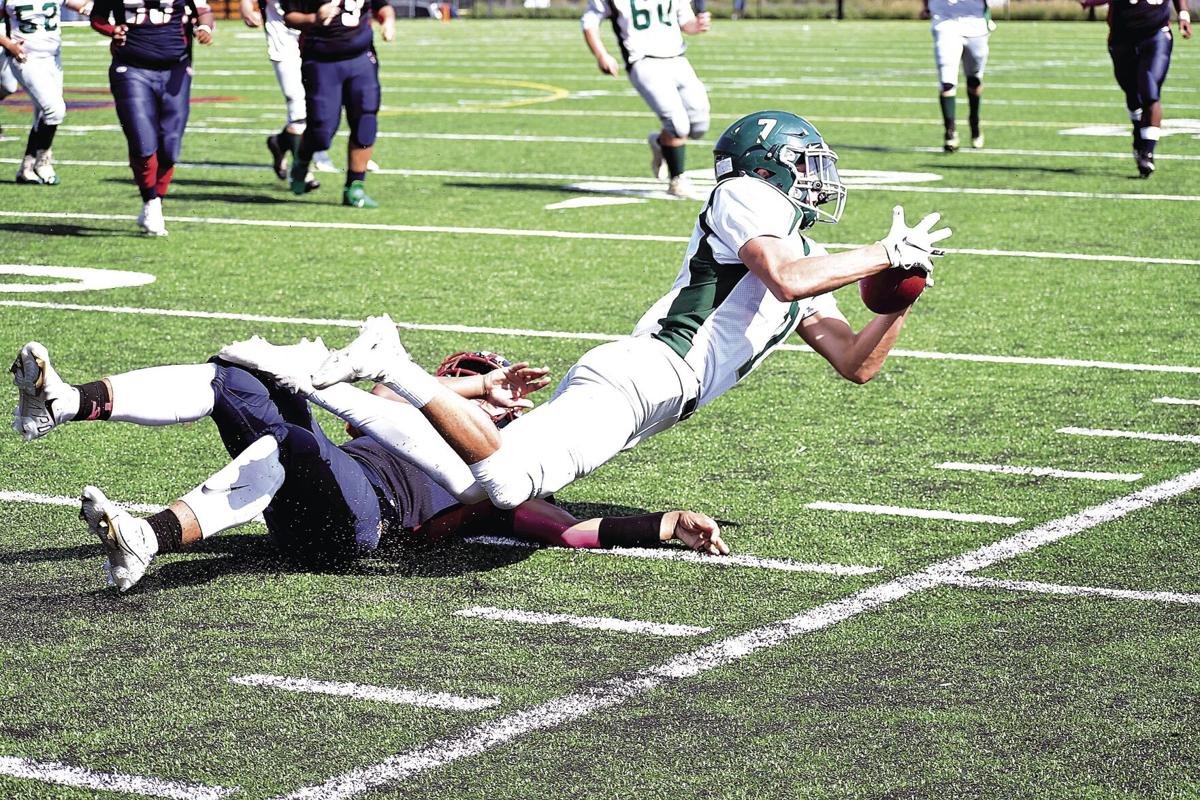 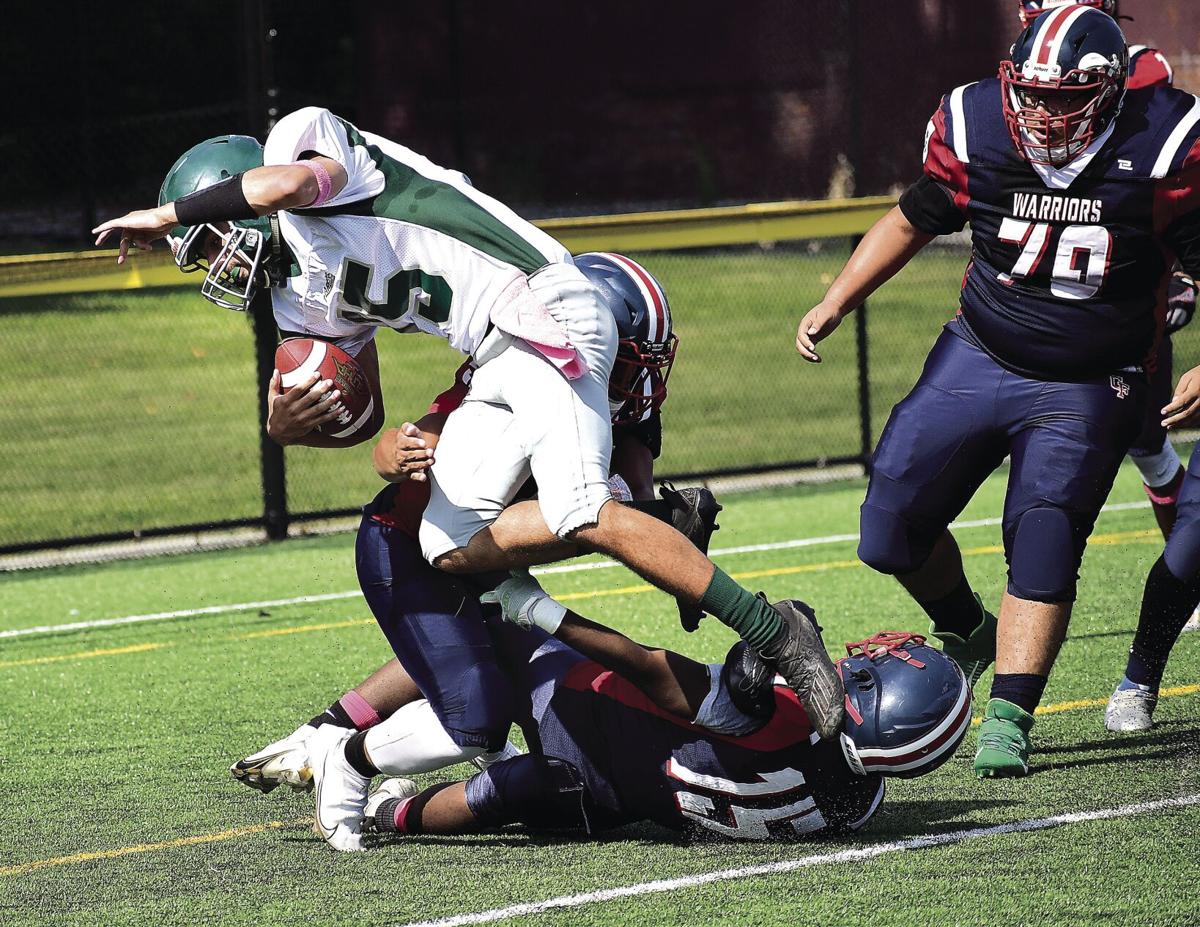 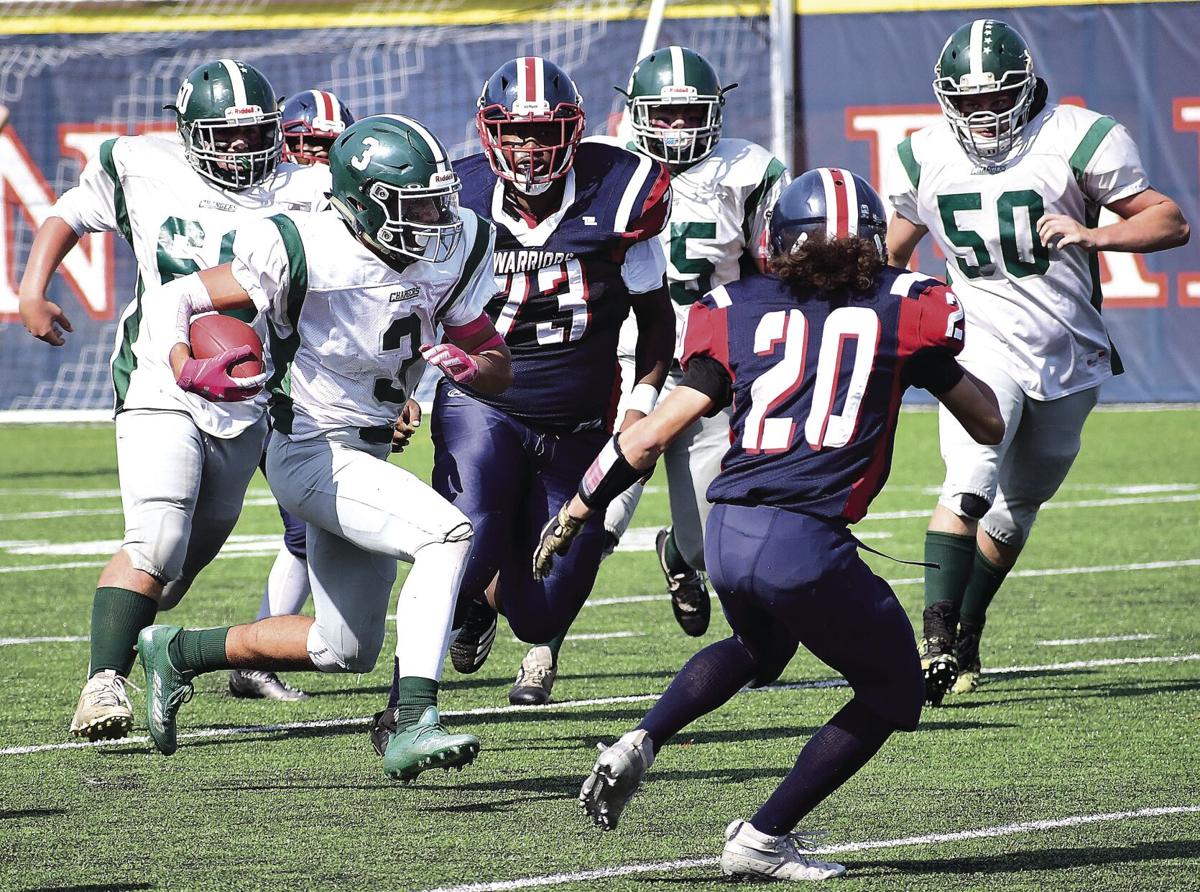 CENTRAL FALLS — It turns out, all the Chariho High football team needed to do to put together a complete game was to travel to the far reaches of the state.

Playing at far-flung Macomber Stadium on Saturday afternoon, the Chargers had their best outing of the young season, winning comfortably over the Central Falls/Blackstone Valley Prep co-op, 42-6, in a Division III game.

“Today was our first game of the season where we played a full 48 minutes,” Charger coach Nick Russo said. “We had a few hiccups early defensively with a blown assignment, but this is the closest to a full 48 as you can play.”

An all-around strong offensive day led the Chargers to a whistle-to-whistle victory in which they never trailed. A three-touchdown second quarter put winless Central Falls (0-4, 0-3 Division III) firmly in the rear-view mirror, as starting quarterback Zoot Boschwitz had a stellar 14 for 16 day through the air, throwing for two scores.

Boschwitz added another touchdown with his legs, as he ran for 38 yards to go along with his 175 passing yards. After a rough performance last week in a loss to Narragansett, Boschwitz rebounded nicely on Saturday. He confidently led a Charger unit that committed zero turnovers, and connected with teammates Caleb Maggs, Collin Fitts and Jaxson Morkis for passing scores.

“Zoot, it’s his third year as a starter,” Russo said. “He’s a senior, great quarterback. Dual-threat, he can do it in the air and through the ground. He’s probably the smartest high school football player that I’ve been around. He’s starting to see the full picture, he’s protecting the football.”

Turnovers plagued the Chargers in their loss to the Mariners, but on Saturday it was full-steam ahead for the offensive unit. Maggs tip-toed his way up the sideline for the game’s first touchdown, an impressive 59-yard scamper that gave his team a lead it would never relinquish.

“That’s what a great player does, bounces back,” Russo said of Boschwitz’s turnaround from last week. “It’s not about you having success, it’s about how you bounce back from your failures. He took it personally last week and improved on his ball security this week.”

The offense had the flashy plays, but it was the defense and special teams that made sure the Chargers would head home happy. Aidan Haxton blocked a punt in the second quarter, putting the offense just 22 yards from the end zone. That set up Fitts first touchdown of the day, a 9-yard run that increased the lead to 20-6. Fitts also caught a TD pass and intercepted a ball in the second quarter.

“In terms of the preparation throughout the course of the week, we knew that they were weak on their edge protection on their punt unit,” Russo said of the blocked punt. “That’s something we prepared for. We came close, we’ve been coming close all year [to blocking punts]. We coach the crap out of special teams and it’s rewarding to the players to put that kind of effort in and see the result on gameday.”

Haxton was given a further reward for his punt-block: the game ball. He also was given some reps at running back on the final series of the day, adding 14 yards onto the team’s rushing total of 201 yards.

After allowing a touchdown on their first drive, the Charger defense settled in nicely. Their big play came courtesy of Fitts, who secured the game’s sole turnover on an interception. Central Falls was threatening to tie the game when Fitts made his red-zone grab. The Charger offense rattled off a 96-yard drive following the turnover, a major momentum shift in the game.

“We’ve turned the ball over in every game we’ve played,” prior to today," Russo said. "This is what our team is capable of if we play mistake-free. We played extremely mentally tough today.”

The Chargers now sit at 2-2 on the season. They face Johnston at home on Friday at 7 p.m.