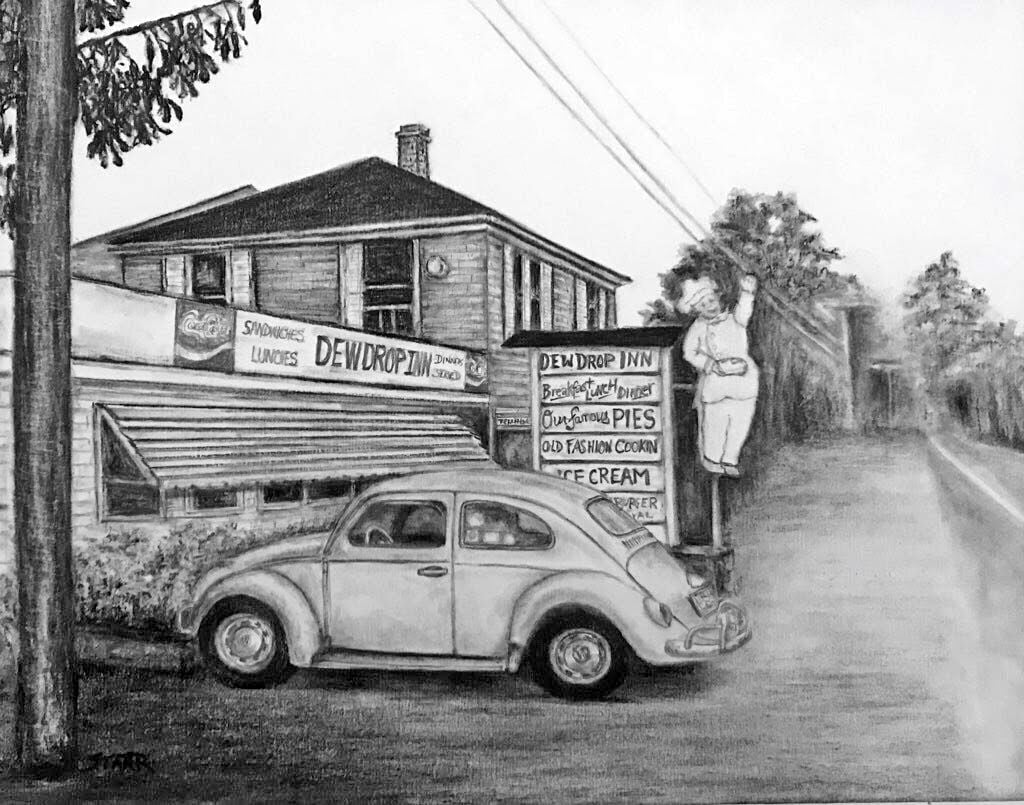 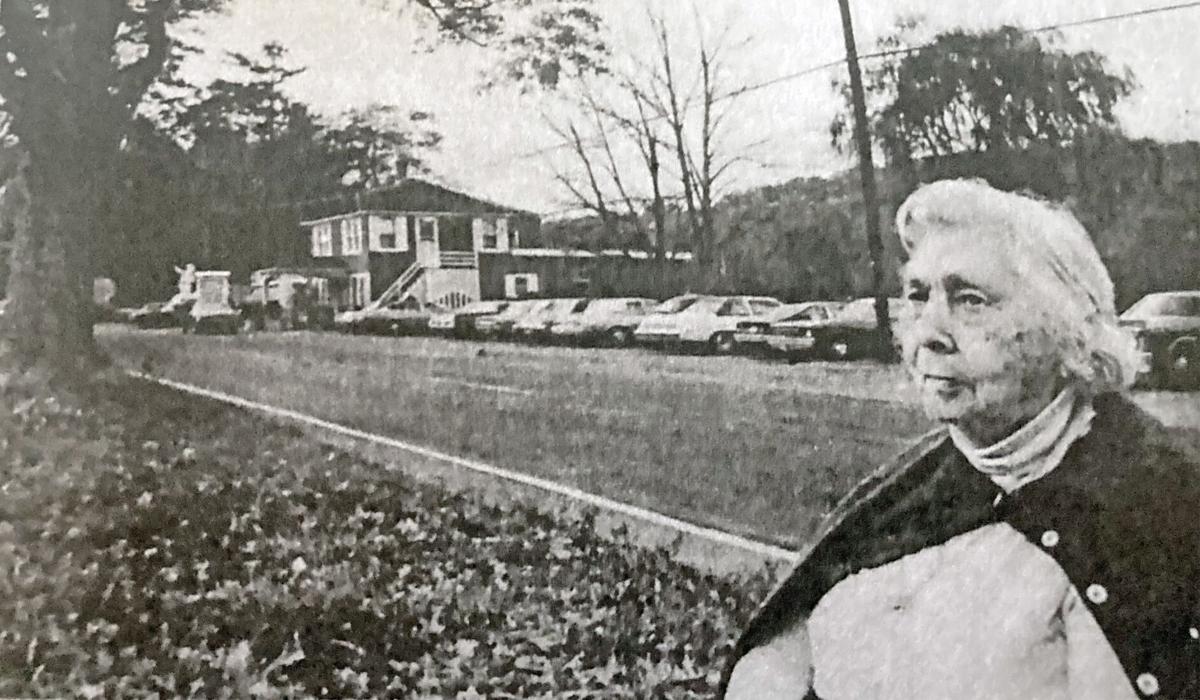 Mrs. Ethel Moussie from a story in The Sun about the 60th anniversary of Dew Drop Inn.

Mrs. Ethel Moussie from a story in The Sun about the 60th anniversary of Dew Drop Inn.

Once again my thanks to Robin Rice, editor of the North Stonington Historical Society newsletter, for reprinting in this April’s issue a story I’m happy to retell one more time here: the history of the much-adored and long-defunct Dew Drop Inn.

Crowded booths, crooked floors, 5-cent coffee and a jolly chef hailing from a signboard along Route 2 with come-ons such as “Our famous pies” and “Old fashion cookin’,” all under the homiest appeal of them all: “Dew Drop Inn.” This was pre-casino North Stonington, in fact, pre-casino New England, and the Dew Drop offered a welcome respite on the long slog from the Westerly beaches to home in Worcester or Springfield on those traffic-choked summer weekends when all the baking, alas, was not just in the Dew Drop ovens.

This was dependable diner fare on a Friday — those fish dinners! Those lines at the door ! — or Saturday night, sometimes with music, mostly with neighbors and always with a selection of round desserts.

Dew Drop Inn, or what was left of the original, morphed in 2000 into Rosie’s Around the Clock Grill, which closed in 2006, and the building was razed in 2010. The site, which has its own contested but finally settled history, for the last decade has been home to Buon Appetito Ristorante and Pizzeria.

What the historical society newsletter serves up in this issue is what looks like a newspaper story from 1978 celebrating the 60th anniversary of Dew Drop Inn.

“The Grand Opening of the Dew Drop Inn took place in the summer of 1918 when an eager and enterprising young North Stonington girl started her little restaurant on Route 2 in a 12 x 12 foot building her father, Curtis Eggleston, built for her opposite their family home,” the story begins.

“”It was hot dogs and sandwiches, soda and hot coffee at 5 cents a cup. The coffee stayed at the record 5 cents for 55 years.”

The piece continues: “From the horse and buggy and trolley car days to the age of astronauts Mrs. Ethel Eggleston Moussie has run her restaurant doing all the cooking herself, at first, with milk, eggs and vegetables from her father’s farm. In the fall of 1918, she had $100 and borrowed another $100 from her father to build another 12 x 12 section onto her restaurant.

“The location was very strategic from the beginning, as it is today. The trolley car running from Westerly to Norwich had a switch stop at that point. The old road was dirt, but soon it was paved and cars began chugging along. Two gasoline tanks, hand pumpers, were put in by the Dew Drop Inn. ‘We fed the motors and fed the men,’ said Mrs. Moussie.”

According to the history, the diner expanded when Mrs. Moussie added a surplus World War I barracks building from Napatree Point at Watch Hill, which doubled the size of the inn.

“Potbellied stoves were used for heating back in the early days,” reads the story. “When the trolley lines went bankrupt, the building was moved back onto the old trolley track bed.

“In 1920 they built a dance hall across the way, a little south of the old homestead. It was lit with lanterns and heated by wood fires in two 50 gallon drums made into stoves. They had dancing three nights a week the year around with music on the violin, piano and drums. Folk dancing was popular, run by an artist, Jack Rae from Pendleton Hill, who played the harmonica, and his wife Helen who called the turns. In the ’30s and ’40s, swing bands played the tunes.”

The story is accompanied by a carbon pencil drawing of the Dew Drop Inn by local artist Suzanne Starr as part of a series of artworks from which all profits from their sale went to the North Stonington Schools’ Food Pantry to help students and their families in need.

Mrs. Moussie’s son, Curtis, who had helped in the restaurant since high school, eventually took over management of the inn. With his wife Angie, the story concludes, the couple kept busy with a team of 16 helpers. Ethel Moussie would often be there, greeting friends and diners.

Only a memory now, all of it. Even a motley crew of locals known as the Dew Drop Thunder Lizards who, in the 1980s and into the ’90s, under the leadership of Grand Lizard David Dodge and Peerless Dinosaur Charlie Taylor, would depart from the inn on temperate Thursday evenings for, in Dodge’s words, “the airing of elderly motorcycles and the oiling of forgotten roads.”

Arthritic but lovingly stroked vintage bikes, including the British-made Vincent, BSA and Norton; American-built Indian and Harley; the German BMW and Italian Ducati and Moto Guzzi would rumble away under the banner of the Dew Drop.

Gone the way of the trolley and the dance hall, and the 5-cent cup of coffee.

Athlete of the Week: May 1st

Sponsored by Antonino Auto Group: For the remainder of the school year, The Westerly Sun will be selecting a high school Athlete of the Week. Voting closes on Tuesday at 9am and the selection will be announced on Thursday. The nominees for the week ending May 1 are as follows:

Boston's iconic Swan Boats return after a year off

In the Easy Chair with Paula Glen

In My Own Shoes: Who do they think they’re kidding?

Postscripts: Dishing on a date with one of NPR’s ‘Founding Mothers’