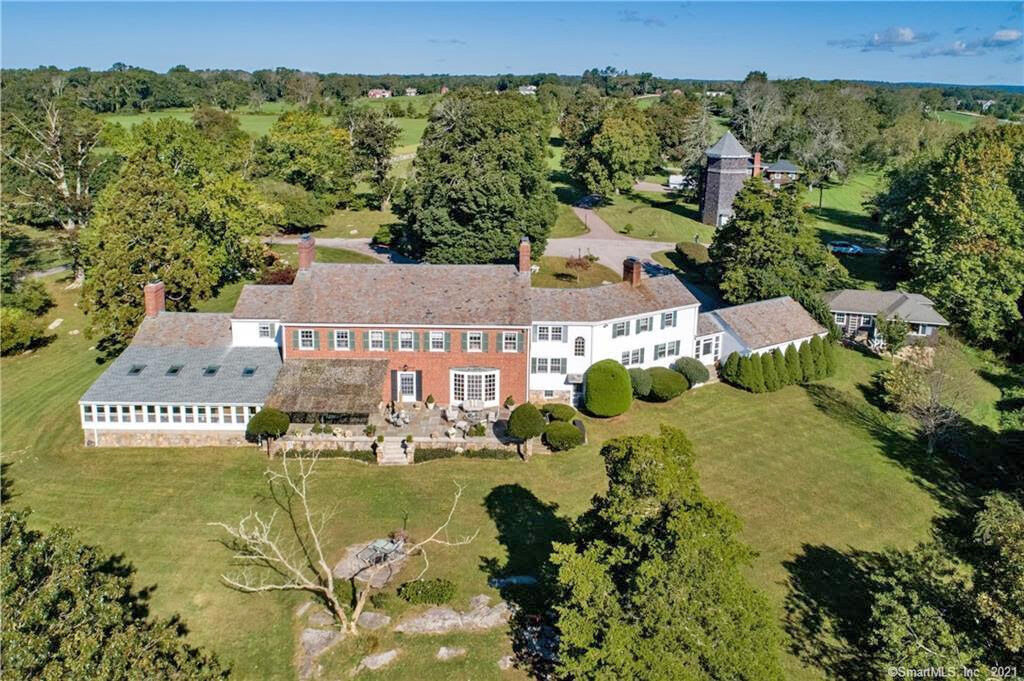 The 200-acre Stonington estate known as "Farmholme" and owned by the late singer Sergio Franchi and his wife Eva, who is now selling it. (Credit Redfin Real Estate) 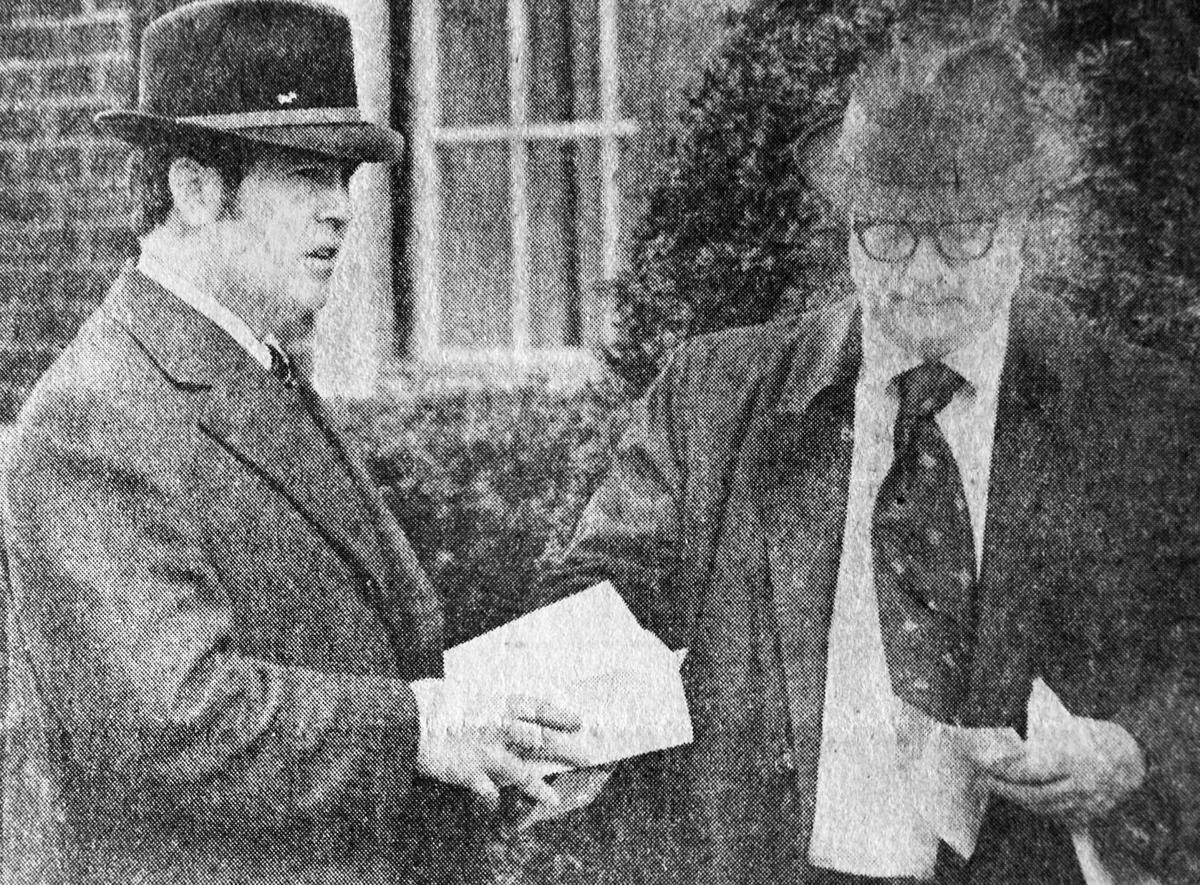 John W. S. McCormick, left, and Sheriff Henry Marsh on the day in 1981 when McCormick was evicted from “Farmholme” in Stonington.

The 200-acre Stonington estate known as "Farmholme" and owned by the late singer Sergio Franchi and his wife Eva, who is now selling it. (Credit Redfin Real Estate)

John W. S. McCormick, left, and Sheriff Henry Marsh on the day in 1981 when McCormick was evicted from “Farmholme” in Stonington.

• From Superior Court Judge Steven Spellman, of Stonington, some historical perspective on the Westerly quarry and granite industry to which he has a family connection.

He sent this material to me in response to a story about a 19th-century granite statue, said to be that of St. Helena, rescued from an abandoned quarry and resurrected on the property of Cherenzia Excavation on Ledward Avenue.

It was a piece written by Larry O’Keefe and Joe Donohue, of Pawcatuck, entitled “The Lunch Pail Brigade: Valentia Island to the Westerly Quarries” and published in the February 2019 issue of the Stonington Historical Society bulletin.

Basically, it relates how Irish workers, many of them recruited but most of them likely fleeing famine and political persecution, migrated here from a small island called Valentia Island off the southwestern coast of County Kerry in the mid-1800s to work, as the story says, “as stonecutters, blacksmiths, teamsters, drillers, blasters, polishers, toolmakers, quarrymen” in Westerly’s quarries.

The daily procession of scores of workers carrying tools and lunch pails walking along Liberty Street toward the Westerly quarries was dubbed “The Lunch Pail Brigade.”

Italian immigrants who followed were more the artisans — the sculptors and stone carvers — as well as laborers in the quarries. Scots and Finns also worked the quarries.

Many of the Irish settled with their families in the Pawcatuck neighborhood named Downerville, and helped build St. Michael the Archangel Roman Catholic Church in Pawcatuck.

Among the families who came from Valentia Island were the Donohues, Driscolls, Lynchs, Murphys, Sullivans, Higginses, Reillys and Spellmans, though as Judge Spellman pointed out, the family name was spelled Spillane on the island.

• The story of how the late singer Sergio Franchi acquired the 200-acre estate along Pequot Trail in Stonington known as Farmholme and once owed by Harold Q. Moore, president of the George C. Moore Co. textile firm on Westerly, evoked memories in a couple of readers of unpleasant personal dealings with the shady fellow who sold the estate to Franchi in 1979 — John W.S. McCormick.

McCormick, the heir to a shade tobacco fortune in Connecticut, was sentenced to just under four years in federal prison for bank fraud in 1991. He died in 1996 of a malignant brain tumor at age 53.

In September 1979 Franchi and a partner bought Farmholme for $395,000 from McCormick, who was facing foreclosure from a Rhode Island bank on the mortgage. Franchi offered McCormick the chance to buy it back for $475,600 by September 1980, but McCormick refused, claiming the sale was actually a loan and, in fact, a usurious arrangement. McCormick failed in his efforts to hold onto the estate, had to be evicted and finally saw his claim to the property rejected by the Connecticut Supreme Court in 1983.

The estate is now on the market for $12.6 million.

One reader, Dr. Max Morrow, now living at Latimer Point in Stonington but working as an anesthesiologist in Hartford when he bought his home in Windsor from McCormick, characterized him as “a larger than life person and a true sociopath.”

McCormick lived across the street from Morrow for a short time. The house McCormick sold Morrow was not all that was advertised, but the matter did not end up in court, which was rare for McCormick.

Eric Dessaules, of Westerly, also had a story to relate:

“I, too, was involved in the McCormick shenanigans,” he wrote in an email. “My father and I were house painters who stained and polyurethaned the expansive floors of the main house in the late 1970s. No payment was ever made and he always spoke a good line with excuses and promises.

“The lawyer that we contracted happened to also represent the bank that was foreclosing on the property. He said normally he wouldn’t take a case of such low monetary value. However he recommended that we lower and resubmit the bill of the job to McCormick to the threshold that would make it eligible for small claims court. He said when McCormick doesn’t pay that he would gladly take the case to small claims for us as a matter of principle.

“We won the case in small claims court and the lawyer was able to have a sheriff take possession of an Army jeep that was in McCormick’s name. That jeep was a lucky find. It was tough to find something that McCormick actually owned outright.

“That jeep found a home on Block Island after I bought it at the sheriff’s sale and resold it.”

• Lastly, Maureen Karsten of North Stonington, regarding a story about finally finding my way to Peter Pots Pottery in West Kingston, wrote to say:

“Your recent article about Peter Pots has brought back many memories! I became aware of the company in 1957 and started collecting. By the mid-60s, I had enough place settings to use as my ‘everyday’ dishes. Since then my collection has grown enormously as family and friends were always giving me pieces I didn’t have. In the beginning there was just brown, then came the blue, later some green — but I love the blue and that’s mostly my collection. I won’t even enumerate the different pieces I own — even a lamp!

“Originally, there was a retail store in the Appanaug section of Warwick along with a flower shop. In 1958, I was waitressing in Bar Harbor, Maine and came upon a gift shop there selling this pottery!”