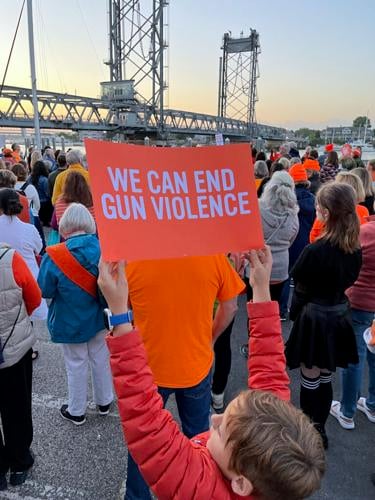 The author’s 8-year-old grandson at a rally against gun violence on June 4 in Portsmouth, N.H. (Courtesy of Sam Slosberg) 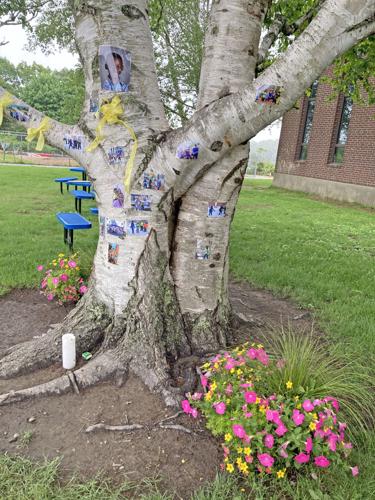 A memorial tree at a Portsmouth, N.H., school for Quarius Dunham, 8, who was shot and killed while riding in a car in Florence, S.C. (Steven Slosberg, Special to The Sun) 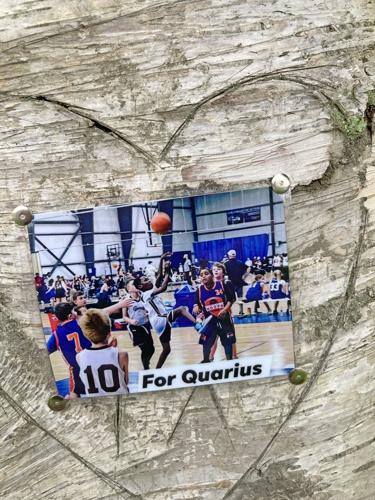 A picture on a memorial tree at a Portsmouth, N.H., school for Quarius Dunham, 8, who was shot and killed while riding in a car in Florence, S.C. (Steven Slosberg, Special to The Sun)

The author’s 8-year-old grandson at a rally against gun violence on June 4 in Portsmouth, N.H. (Courtesy of Sam Slosberg)

A memorial tree at a Portsmouth, N.H., school for Quarius Dunham, 8, who was shot and killed while riding in a car in Florence, S.C. (Steven Slosberg, Special to The Sun)

A picture on a memorial tree at a Portsmouth, N.H., school for Quarius Dunham, 8, who was shot and killed while riding in a car in Florence, S.C. (Steven Slosberg, Special to The Sun)

I spent a recent weekend in Portsmouth, N.H., a tastefully settled community secure in its historic and culinary allure along the New England seacoast, but a community deeply wounded by the death of a schoolchild, not, directly, from the mass slaughter in a Texas school earlier in May, but the random and wanton murder of one of their own, an 8-year-old third-grader who was simply riding in a car with his family.

My son and his wife and their three school-age children live in that community.

On May 28, Quarius Naqua Dunham, who attended Little Harbour Elementary School in Portsmouth with two of my grandchildren, was traveling with his family to a graduation ceremony in South Carolina, when he was struck in the back of the neck by a bullet from the gun of a man firing at cars passing by his home. Quarius died the next day. His father, who was driving, was shot in the leg, and is recovering.

The alleged assailant, Charles Montgomery Allen, 40, of Florence, S.C., was arrested and charged with one count of murder, nine counts of attempted murder, discharging a firearm into an occupied vehicle, and possession of a weapon during the commission of a violent crime.

At his bond hearing on June 1, Allen reportedly told the judge he, in fact, was a victim.

“‘Can I say that I have been a victim here well over two years?’” he told the judge, according to a South Carolina news report. ‘Every device I have has been hacked. Every device, my cell phones. My TV. I can’t even get a signal at my home to watch TV. Like there is some kind of jammer in the area. I have been a total victim for well over two years. And I said over and over and over I did not want anyone to get hurt. This is not the first. The first time I went and stole some stuff from the store. Just to see if there was still law and order.’”

Lunacy in the flesh, likely zonked on meth, armed with a gun along a rural road taking pot shots at ghosts, demons and innocents driving by.

Guns in the hands of nuts.

My granddaughter, Leia, a fifth-grader and member of the Little Harbour “safety patrol,” got to know Quarius as she welcomed kids off the buses and into school every day and helped keep things moving in the corridors, where she would regularly exchange high-fives with him.

My grandson, Miles, a grade behind Quarius, knew him mostly by reputation — he was a leading basketball player at age 8, competitive and good, and as Miles told me, “really fast.”

Who truly knows how children process any, never mind all, of this ceaseless shock and grief?

Leia, a week after she learned the fate of Quarius, told me during my visit about a memorial tree that was created outside the school entrance, adorned with photos of him, his family, his friends. Flowers and candles are there as well.

I didn’t push her to say more. Her parents, Sam and Jen, told me how emotional she was upon hearing the news and how she sought relief by retreating to her room and writing.

The Portsmouth community has rallied. A GoFundMe site was created with a goal of $200,000 to help the family, as the father, Matthew, recovers and Quarius’ mother, Tecali, prepares to give birth in September. By week’s end, more than $170,000 had been raised.

The weekend I was there, a city-wide gathering was assembled downtown by the Memorial Bridge on Saturday evening, with everyone urged to wear orange and to carry or wear whatever they chose, calling for the end of the gun violence. Some 300 turned out.

Other memorials were planned, but as my son, Sam, and I watched my eldest grandchild, Anneke, 13, play softball with seventh- and eighth-grade girls on a Saturday morning, he said there is a pall over the community. It was there during Miles’ baseball game early Saturday morning and Leia’s lacrosse match, later that morning.

Sports are a vital part of my grandchildren’s lives, as they were for Quarius.

I quote from the GoFundMe site, an appeal written by a Portsmouth parent and speaking for the Portsmouth community, particularly its children:

“This sweet child touched every person he met with his vibrant smile, infectious laugh, snappy shoes, and ambitious dreams. He was known around school as the fastest runner, the best kickball player, superb soccer guru, and a ‘god’ at basketball. He dreamed of one day playing in the NBA, and people around him really believed this could happen. He always greeted people with a hug, and lit up every room he was in. One of the amazing things about his spirit is that he literally made every kid he was around think they were his best friend.”

And now he’s gone, for no sane reason, for merely being with his family on a happy occasion and never knowing he was to become another headline written by guns.

Steven Slosberg lives in Stonington and may be reached at maayan72@aol.com.

With Roe dead, some fear rollback of LGBTQ and other rights

Practicing Faith: God knows your name, and He loves you