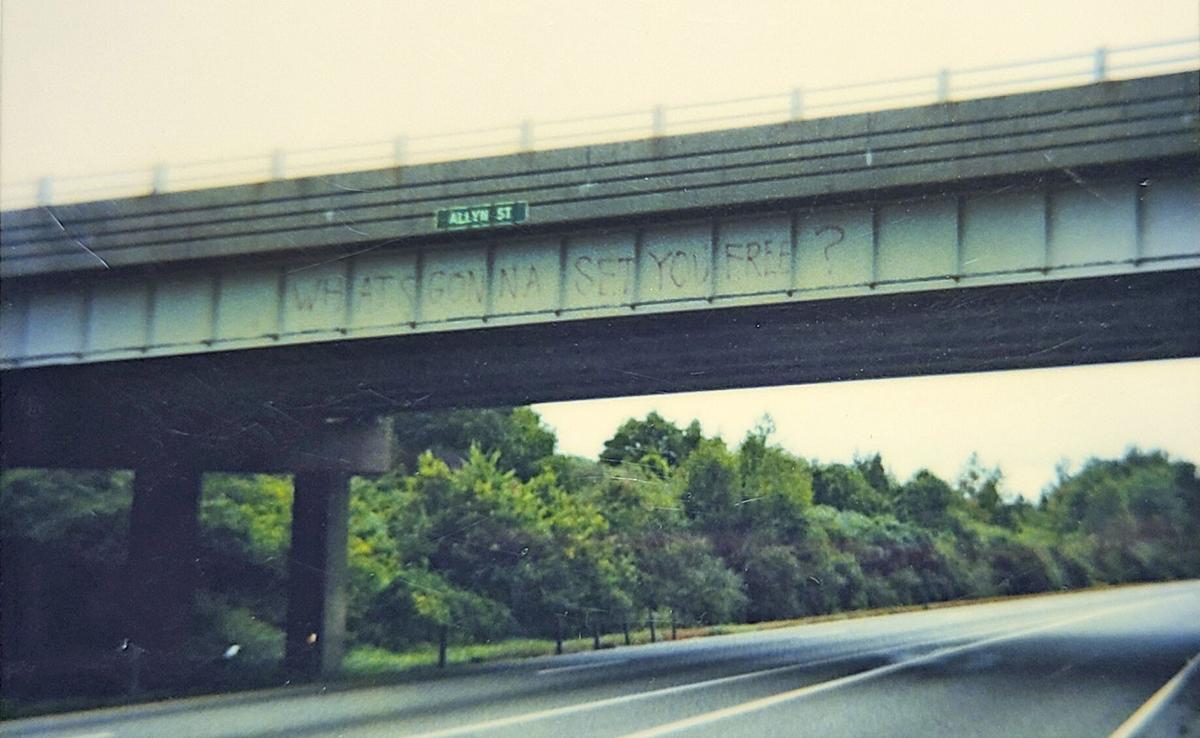 The Confucian question encountered by many a motorist traveling I-95 South in Mystic in the 1990s. (Courtesy of Michael McGuire) 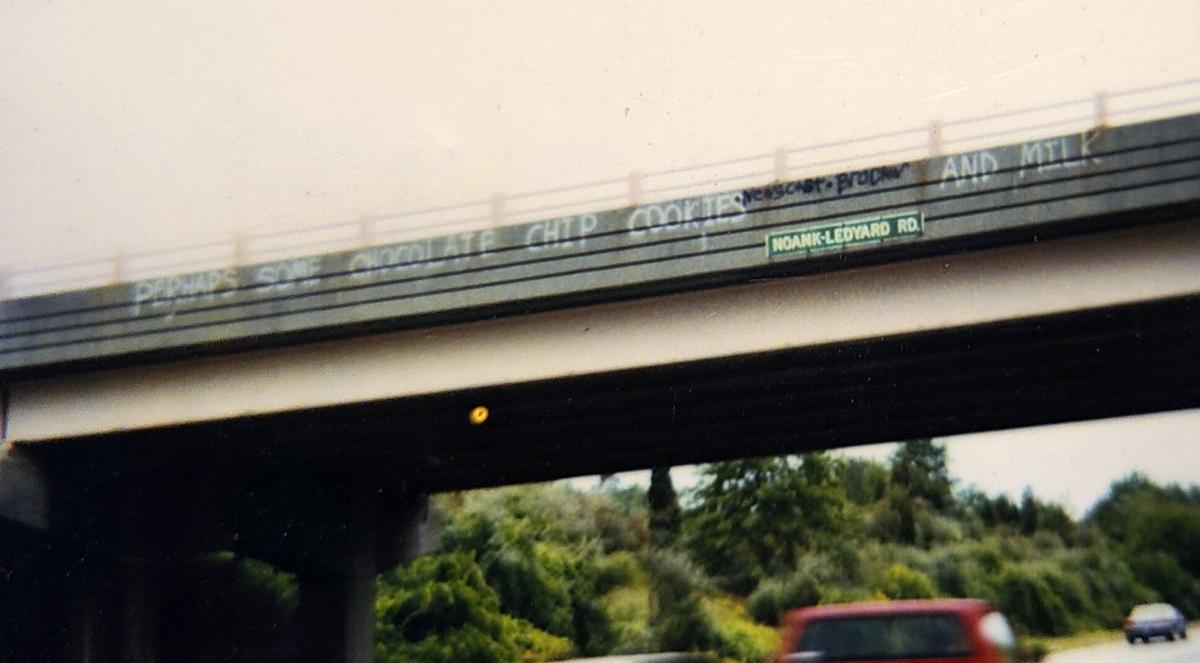 A sardonic (or perhaps earnest?) retort at the next overpass on I-95 South. (Courtesy of Michael McGuire)

The Confucian question encountered by many a motorist traveling I-95 South in Mystic in the 1990s. (Courtesy of Michael McGuire)

A sardonic (or perhaps earnest?) retort at the next overpass on I-95 South. (Courtesy of Michael McGuire)

Apropos the darkness that has been the Trump Occupation being lifted, I am reminded of a singular line that kept the spirits of many a motorist — commuter, errand-runner, trucker and traveler alike — beguiled here some three decades ago: “What’s gonna set you free?”

It came from a song called “Gratitude” on the album “Check Your Head” by the Beastie Boys, an American rap-rock group from New York, and it ended up spray-painted across the Allyn Street overpass in Mystic above Interstate 95.

Good times gone but you feed it

Hate’s grown strong, you feel you need it

Just one thing, do you know you?

What you think, that the world owes you?

The graffiti was the nocturnal handiwork, if not acrobatics, of Mystic musician and opportunistic artist Rich Freitas who, one July evening in 1992, managed to maneuver onto the overpass from the side of the northbound lanes, balance across the girder, and, finding himself alarming up close and personal to 18-wheelers, spray-paint the stone side of the overpass so that drivers heading south — that is, toward New York — would get the message.

Freitas, who still works as a musician and part-time at Mystic Disc, the vinyl emporium on Peacock Alley in downtown Mystic, remembers that it took him two weeks to figure out how to do it, and that the execution involved putting his bike in the back of a truck, parking the truck on Pequot Avenue, riding the bike to the overpass, stowing the bike and then climbing down to and along the infrastructure.

By the time I got round to writing about the graffiti, in July 1994, the existential question was still out there but had been answered, more or less, with some homespun wisdom. Another graffitist, still not publicly disclosed, had added: “Perhaps Some Chocolate Cookies and Milk.”

This was spray-painted on the next overpass down the road, the one for Noank-Ledyard Road.

And then a third bit of dubious sagacity appeared: “Newscast Brokaw.”

The composite hand-spraying on the overpasses went blissfully unsandblasted for several years, the highway overseers’ attitude likely being one of tolerance, or, perhaps, indifference, as long as no one complained or, worse, experienced a fatal diversion.

But there was an equally creative, though far less physically daring, response to the Allyn Street overpass graffiti. Michael R. McGuire, an established playwright and novelist, was inspired by what he read driving on I-95 and wrote a play entitled “What’s Gonna Set You Free.”

The play was given a staged reading, directed by Arthur Pignataro, during the Local Playwrights Festival at the Eugene O’Neill Theater Center in Waterford in May 1995. The play was also produced at the Avery Point Playhouse in 1997.

McGuire, who lives in Bradford and, in his early 50s, has been writing plays much of his adult life, has said the play was built around several pieces of graffiti on overpasses along I-95 and paid homage to Jeff Paprocki, once Mystic’s infamous “The Fuse.”

As he said at the time, “Someone who would write graffiti is very desperate to communicate. I would assume. Or why else would they choose that method to communicate?”

He framed the play around desperate characters and the way they try to change their lives to connect with people around them. He said then that he likes to explore serious themes with comic plays.

“I think comedy is probably the best method for getting across something serious,” he said, explaining that a drama or tragedy with a message can come off as preachy.

On his part, Freitas said at the time that his graffiti was not a desperate attempt to communicate but, in this instance, just to get a line he liked from the Beastie Boys out there, a line worth contemplating, as it was by souls in motion for some time.

The “chocolate cookies and milk” added the right bit of levity.

Artists have their own motivations and interpretations, and so much the merrier.

The overpass looks sadly forlorn these days, just a reliable, if aging, construction keeping us secure as we make our way.

I liked it better when the inert and inanimate did have something to say — see those playful faces on the I-95 overpass abutments on the way to Providence? — but though I miss the spirit, I no longer mourn the graffiti’s passing, as I will not mourn the gloom that was Trump.

Practicing Faith: Let a return to church sharpen your faith