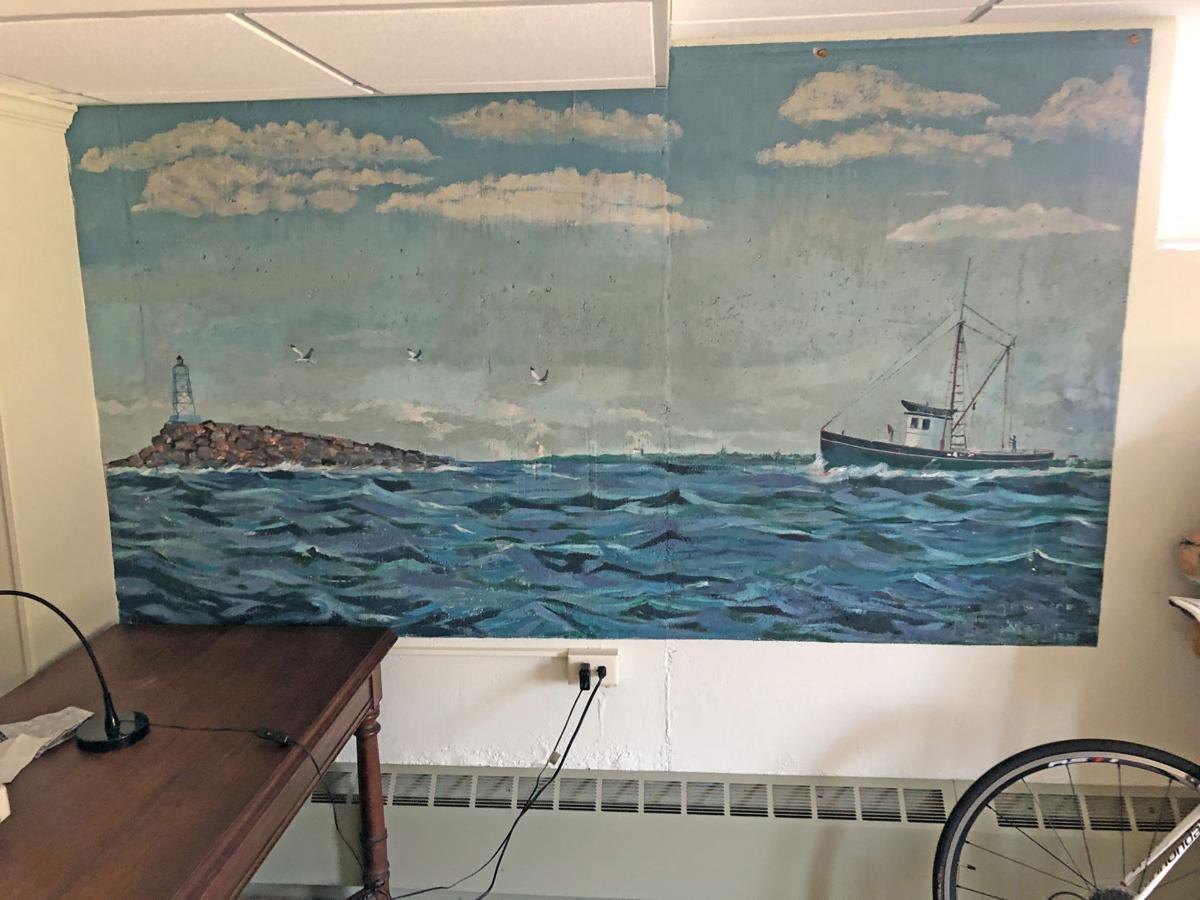 A wall painting by Ellery Thompson of a dragger passing by Latimer Reef Lighthouse in the basement of a home in Stonington. (Steven Slosberg photo) 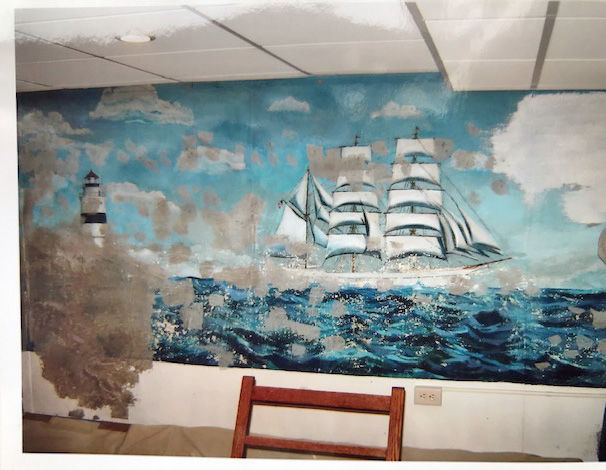 A “lost” second Ellery Thompson wall painting of a dragger passing by Latimer Reef Lighthouse in the basement/garage. There was too much deterioration to salvage it. (Courtesy of Richard and Liz Stern)

A wall painting by Ellery Thompson of a dragger passing by Latimer Reef Lighthouse in the basement of a home in Stonington. (Steven Slosberg photo)

A “lost” second Ellery Thompson wall painting of a dragger passing by Latimer Reef Lighthouse in the basement/garage. There was too much deterioration to salvage it. (Courtesy of Richard and Liz Stern)

One serendipitous outcome of The Quarantine, besides day-by-day health and community goodwill, is the grand revelation, at least to a couple of friends and me, of an 8-foot-wide by 5-foot-deep wall painting — a seascape — by Ellery Thompson, among this seafaring region’s most enduring and singular souls, in what is now the basement of a neighbor’s home.

But before going ahead with my tale of discovery, let me recommend a visit to the New London Maritime Society (aka the Custom House Maritime Museum) website and a superb online exhibition entitled “Remembering Ellery Thompson: Fisherman, Writer, Artist and Free Spirit.” It was curated by Brian Rogers, of Mystic, librarian at the Custom House, on Bank Street in New London, and retired college librarian at Connecticut College.

Therein awaits a vast trove of the Stonington dragger captain, who was born in Mystic in 1899 and died in 1986 at a Colchester nursing home at age 87, who once wrote about himself:

“Cap’n Ellery Franklin Thompson of Mystic, Connecticut, appears to be the only Atlantic Coast commercial fisherman to have fully recorded his life with his own words and pictures. He has written several books and painted two thousand oil painting(s) — chiefly of storm-tossed fishing vessels, but a few nudes including a seaworthy mermaid coming up under the bow of a hard sailing Gloucester fishing schooner.”

I interviewed Thompson once, toward the end of his life, when he was living in a red shack at Fort Rachel in Mystic, and wrote this about him some years later, when the Stonington Historical Society staged an exhibition dedicated to him in 2005: “As a celebrity, Ellery Thompson, that rooster-neck buzzard of a Stonington draggerman who was up to his ears in fish all his life, has lost none of his sex appeal, particularly to men.’

Among those beguiled by him, I wrote, were Joseph Mitchell, the famed writer for The New Yorker, who inspired readers and Thompson himself to write about his life with a 1947 profile called “Dragger Captain”; Henry Fonda, who toyed with the idea of portraying Thompson in a film and invited him to New York where Fonda was appearing on Broadway in “Mister Roberts”; and Gary Cooper, who did sign on to play a character based on Thompson in a Warner Brothers film to be called “Dragger Captain,” but the film apparently was scuttled by the Korean War.

Based on his fondness for painting nudes, Ellery had a renowned eye for women, too.

All of which leads to a bit of excitement the other week when friends living at Lords Point in Stonington gave up their home to family members from New York, and while the New Yorkers were self-quarantined at Lords Point, my friends moved into temporary quarters up the hill in a house on Lords Hill Road owned by Richard and Liz Stern.

The Sterns bought the house in 2005 from Clarence and Bertha Coogan, career educators who in their later years ran a nursery school in the basement of their home, and where the Sterns have since fashioned an apartment.

Adjacent to the apartment, in what initially was a garage when the home was built in the mid-1950s, is the wall covered by a signature Ellery Thompson coastal seascape with fishing boat, navigational light, ample, rippling ocean and mildly clouded skies. The wall painting was signed by Thompson in 1956, and the discovery of it by my friends did pique my interest as well.

In fact, there was a second wall mural, depicting a full-masted ship under sail, but the concrete outer wall bearing the painting was so badly deteriorated by moisture that the Sterns were unable to salvage it. They did manage to bolster the foundation to save the existing painting.

One question, first and foremost: What was the dragger captain doing up there while the house was going up?

The house was being built for Milton Berry, who owned a pharmacy near the flagpole in downtown Mystic. According to Jim O’Boyle, retired owner of the Mystic Funeral Home and longtime denizen of Lords Point who married Berry’s daughter, Thomasine, Thompson, then living on West Main Street in Mystic, was a crony of Berry and other businessmen in Mystic and likely offered to present his friend with a work of art or two for the new house.

O’Boyle, who knew Thompson, had his own share of Ellery stories.

“Ellery was working at the (Mystic) Seaport as kind of a local character at one of the sheds on the docks,” O’Boyle recalled. “One weekend some money went missing. It was supposed to be deposited in the bank. The head of the Seaport said he was going to give a lie-detector test to everyone. Ellery said, and I heard him tell this to a large group of tourists, ‘I ain’t taking no lie-detector test. I tell so many lies all day I wouldn’t know when I was telling the truth.’”

O’Boyle had another one: “Ellery had this big red Chrysler he drove around. One day he was first in line when the drawbridge went up and he fell asleep. The bridge keeper had to come down and wake him up. That was Ellery.”

And now I know there is one more colorful piece of the Ellery legend and legacy around, and right next door.