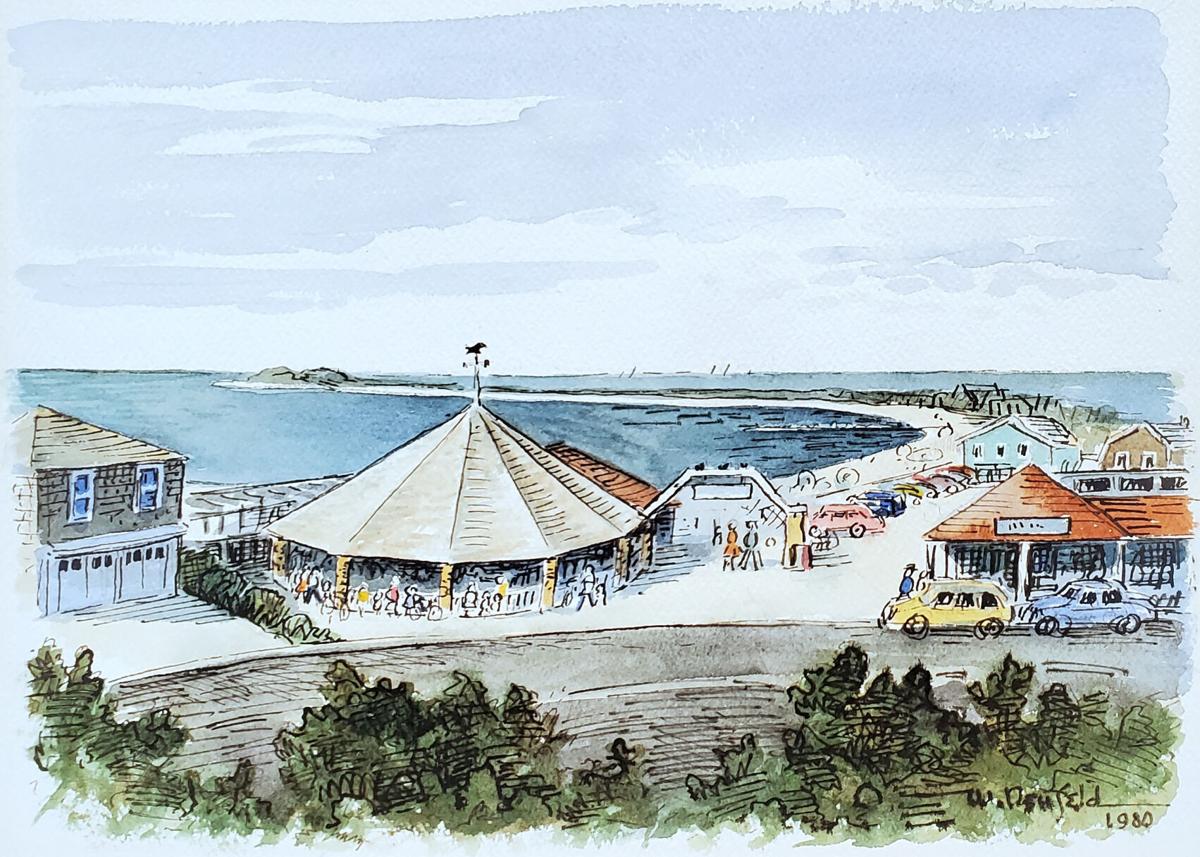 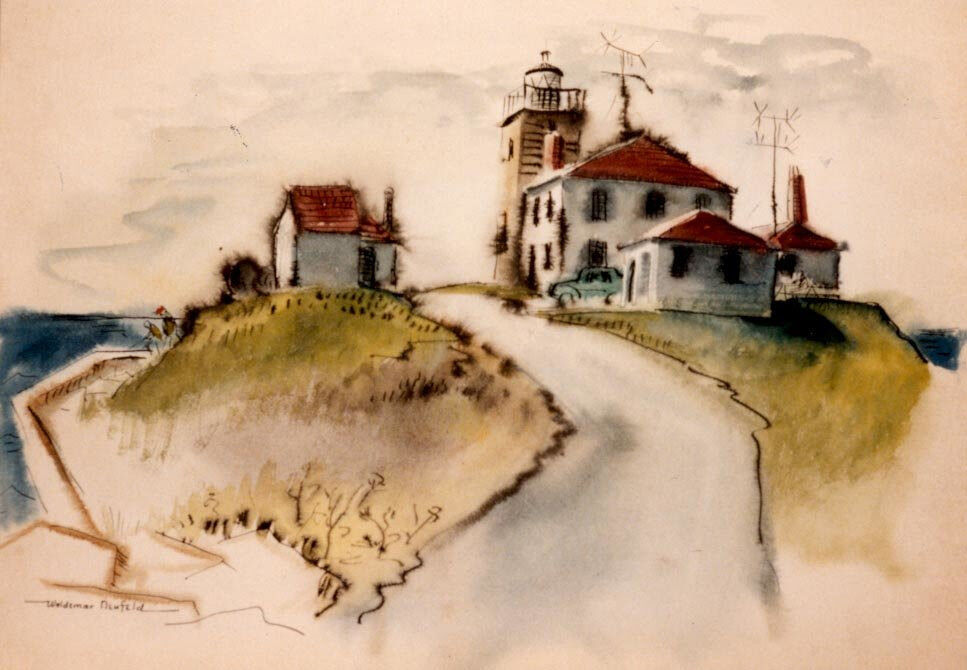 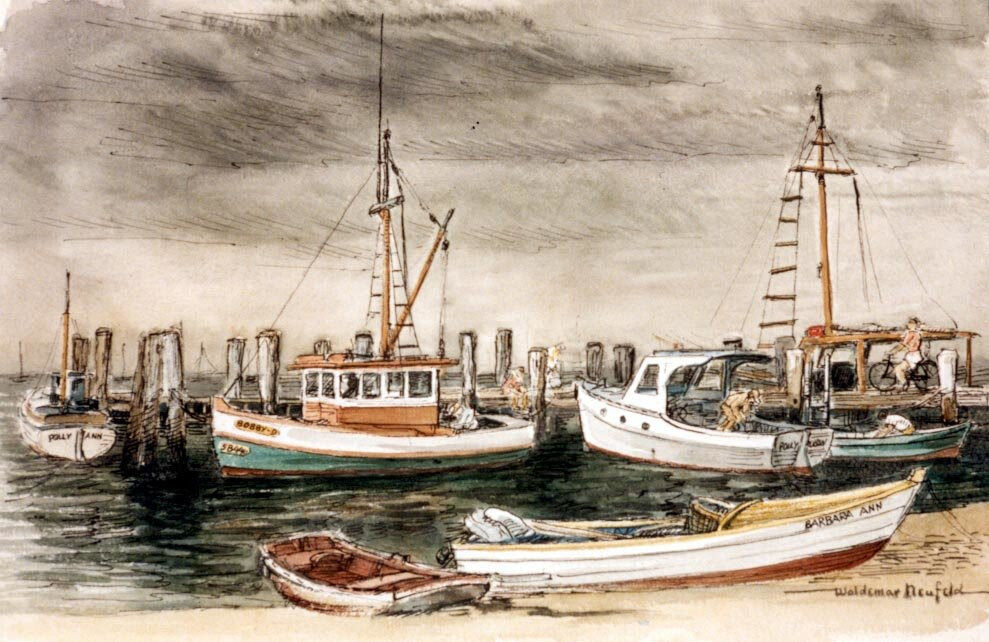 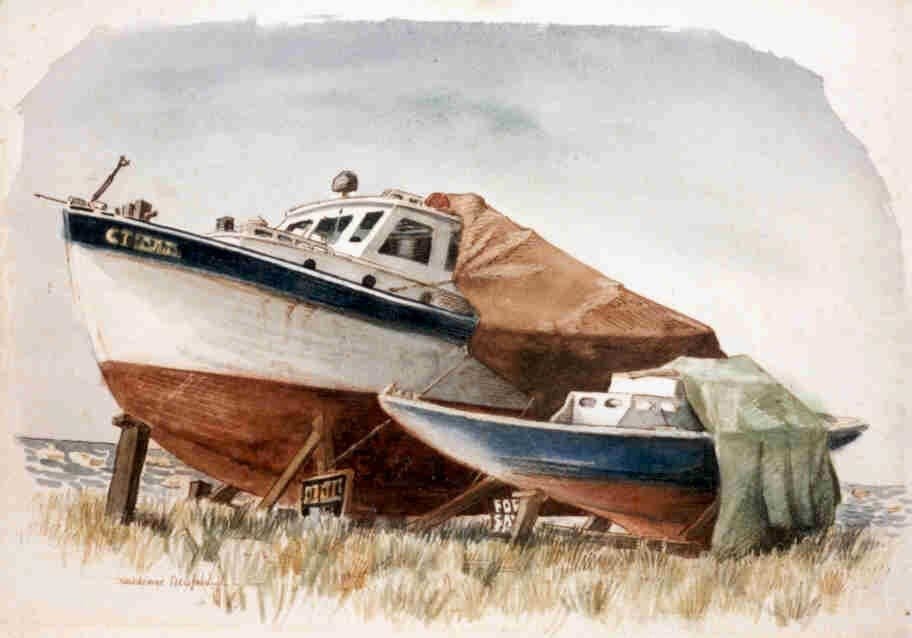 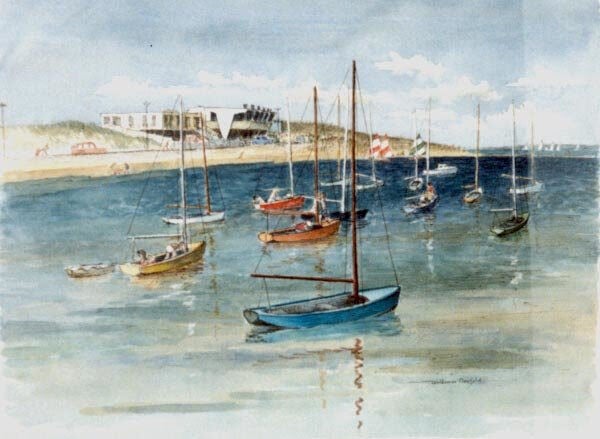 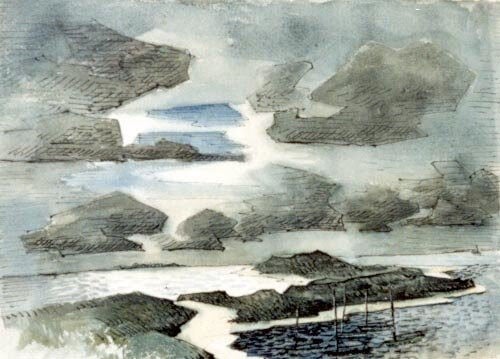 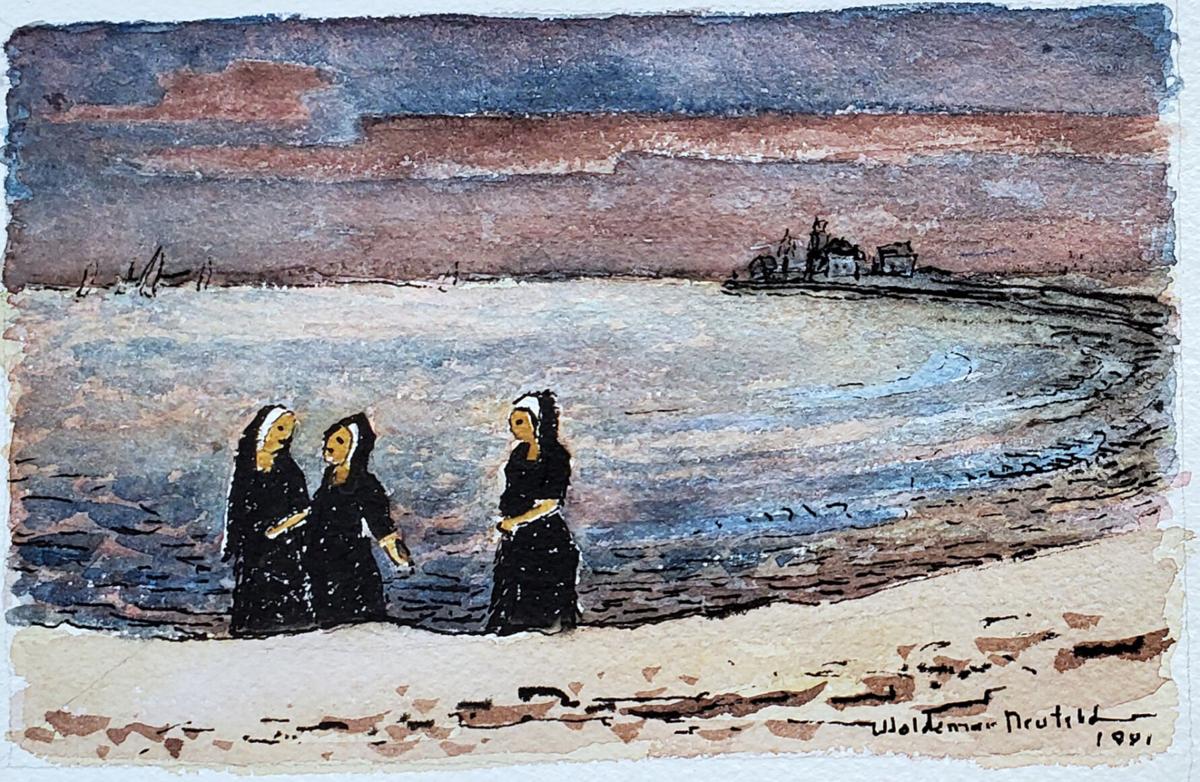 Three nuns on the beach, 1981. Courtesy of the Gregory James Gallery in New Milford, Conn.

Three nuns on the beach, 1981. Courtesy of the Gregory James Gallery in New Milford, Conn.

For several decades beginning in the late 1950s, Woldemar Neufeld, an artist living in New Milford, Conn., spent two weeks each August vacationing with his family at Watch Hill, and produced, during those weeks by the beaches and ocean, a trove of watercolors, oil paintings and block prints of scenes in Watch Hill, Stonington and Mystic and places nearby.

Prolific and colorfully delightful as his art legacy is, what is equally captivating is his life story, particularly his early life, and, traumatically, the fate of his father and the years that ensued.

Neufeld, who lived from 1909 until 2002, was born in Russia in a German-speaking Mennonite community in Waldheim, Molotschna Colony, Ukraine.

The Mennonites, welcomed to Russia along with other Europeans in 1763 by Catherine the Great, invested themselves principally in agriculture, and Neufeld’s grandfather, Isaak Johan Neufeld, was a highly successful industrialist who founded a family-run farm-machinery factory in Waldheim.

According to the artist’s son, Laurence Neufeld, who lives in New Milford, the artist’s father, Heinrich, an engineer, went into the family business, which employed some 300 workers, Mennonite and Russian. Among those workers was a Russian, a foreman in the factory, with a drinking problem. Neufeld’s father eventually fired the foreman because of the drinking.

This was after the end of World War I, when Heinrich was long absent, serving in the medical corps at the front, and during the Russian Revolution, a period of widespread turbulence and upheaval, with various groups vying for military dominance in Ukraine and the Crimea. One history of the Mennonites during this period, published in 1999 by the University of Alberta, says: “Without any dominant political force … lawless brigands and anarchists endeavored to fill the vacuum by exerting political and military control over local inhabitants. In a number of regions heavily populated by Mennonites … partisans relied on terror and violence, including raping and murdering Mennonite colonists.”

In 1920, said Laurence Neufeld, Heinrich Neufeld was arrested by the former foreman he had fired but who had gained stature among the partisans in the region. Heinrich, said Laurence, was brought before a mock trial on trumped-up charges and shot. He was buried in a grave the foreman had dug himself.

Woldemar was barely a teenager at the time.

The artist’s mother remarried in 1923 to a Mennonite elder who had recently lost his wife and the combined families — with 10 children — immigrated a year later to Canada, settling in Waterloo, Ontario. The family finally left Ukraine in the fall of 1924 under surveillance by Communist officials. The two adults and their 10 children journeyed through Riga, London, Southampton, Saint John and Montreal before reaching Waterloo.

Neufeld’s stepfather was a respected teacher and preacher in the Mennonite community and also a poet and playwright, and encouraged the 15-year-old Woldemar to pursue his talent as an artist before the family left Ukraine.

Once in Canada, the young Woldemar worked on the farm of a Swiss Mennonite, went to a country school, enrolled at Waterloo College (now Wilfrid Laurier University) to study art and after graduating in 1930, lived as an independent artist in Waterloo, Toronto and Vancouver.

He began making short visits to a sister living in the United States and decided to enroll at the Cleveland Institute of Art and at Case Western Reserve University.

“After spending a decade chronicling the area surrounding Cleveland in his paintings,” reads a brief biography, “Neufeld moved to New York City in 1945. Settling into a studio on the Upper East Side, Neufeld established himself as an artist and instructor along the city’s East River. The bridges, boats and shorelines became prominent as his subjects for oils, watercolors and block prints.

“… In 1949, the artist (now married and with four children) moved to an 8-acre farm among the hills, lakes and forests of Connecticut, just 80 miles north of New York (where) in New Milford, Neufeld turned his 140-year-old house and barn into a home, gallery and summer art school.”

Laurence Neufeld said his mother and father would take driving trips along the Connecticut shore and other places in New England and picked Watch Hill as the perfect locale for the summer vacations with the children.

“I think I was five when we first came to Watch Hill. My parents liked the Bay Breeze on the main beach street and we stayed there every August until it closed, and then we went to the motor court across the street,” he said. “My father did a lot of painting in Watch Hill, and in Stonington and Mystic, and in Point Judith and elsewhere along the coast in Rhode Island. He had a summer art school and brought students to Watch Hill on summer excursions.”

The Bay Breeze Guest House, on Bay Street, was owned by Angeline Lauzetta and managed by James Lauzetta, and they lived in the rear.

Among the institutions owning work by Woldemar Neufeld in collections are the Library of Congress, the Metropolitan Museum of Art in New York, the New York Public Library, Cleveland Museum of Art, Museum of the City of New York, Mattatuck Museum in Waterbury and the New Britain Museum of Art.

Neufeld died from complications of Parkinson’s disease in November 2002, shortly after his 93rd birthday.

For the last 25 years, the Gregory James Gallery in New Milford has been handling Neufeld’s work and has a collection of Neufeld originals from Watch Hill and Stonington, as well as paintings from elsewhere.

Neufeld’s art, at least what he did in Watch Hill, has an airiness to it, and, I suppose, evokes the breezy ambience of the environs. The early life of the artist, however, paints a rather bleaker picture.