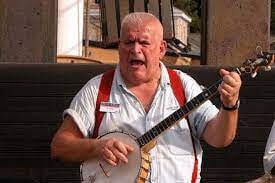 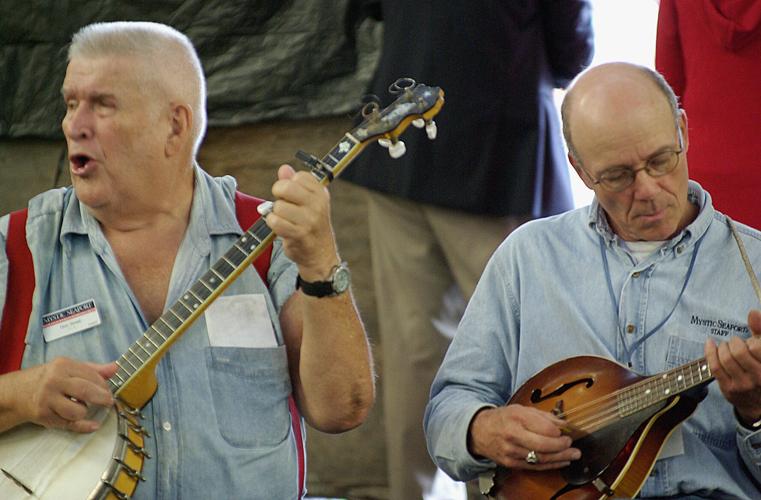 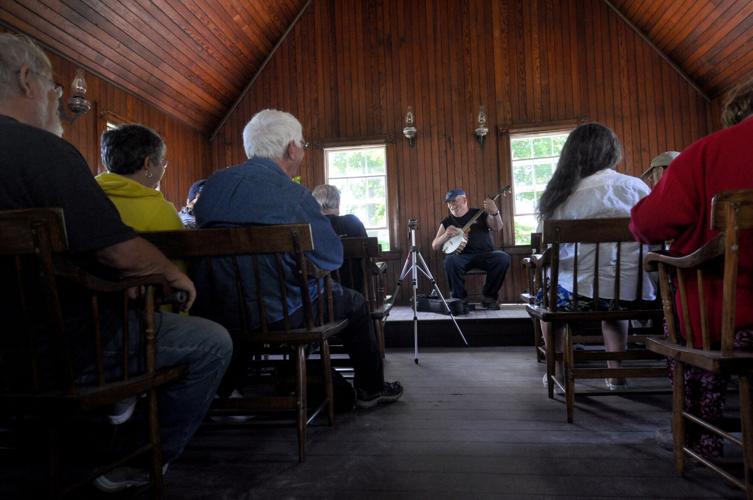 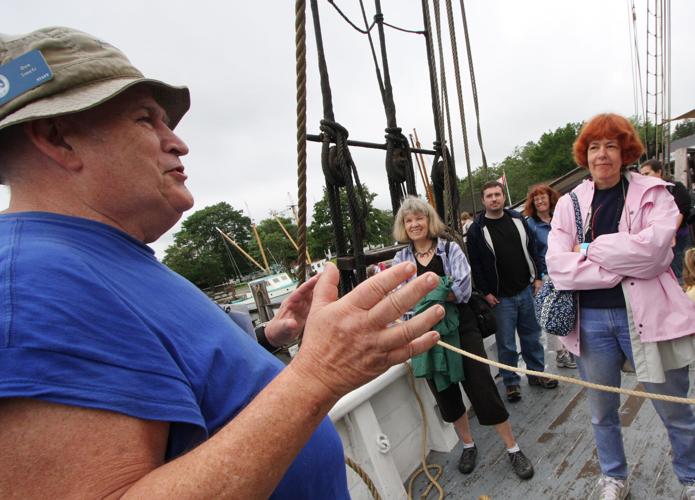 Mystic Seaport employee Don Sineti speaks to visitors aboard the L.A. Dunton on June 15, 2014, after singing sea chanteys during the raising of the anchor aboard the ship at the Mystic Seaport's Sea Music Festival. Photo by Susannah H. Snowden

Mystic Seaport employee Don Sineti speaks to visitors aboard the L.A. Dunton on June 15, 2014, after singing sea chanteys during the raising of the anchor aboard the ship at the Mystic Seaport's Sea Music Festival. Photo by Susannah H. Snowden

Conan the Chanteyman, he was, with his trademark muscleman shirts with the sleeves cut away to the shoulders, a voice to cower a foghorn and a heart big enough for all who came his way, adults and children alike, on the grounds of Mystic Seaport Museum or wherever the next sea music festival was being staged.

Don Sineti died on Jan. 5 at age 79 in Bloomfield, Conn., where he was raised, but in genial spirit, he was at the Seaport, too, where his presence and kindness for 30 years were imbued in the historic wooden hulls and decking, and maritime traditions and music that were the Seaport in his time there.

“Don’s big voice belied a deeply kind and gentle personal nature,” wrote Seaport staffers in a tribute to him distributed to Seaport membership. “He was always willing to give people a listening ear, seldom interrupted, and always smiled with a twinkle in his eye. He seldom spoke ill of others, even if he had a difference of opinion.

“Time in conversation with Don was always well-spent. May we all be good stewards of the wonderful legacy of music and relationships that he left behind.”

This is not merely the respectful rhetoric bestowed on a beloved colleague or family member. In my conversations with Sineti through the years, the words of the staff members capture just who he was.

He was an imposing figure, perhaps 6 feet tall, sporting a crew cut under one cap or another, and a banjo player who put his instrument joyously to work, all the while rousing a crowd and, away from the stage, investing himself on behalf of social justice and environmental preservation.

“Conan the Chanteyman” was an appellation he used on his calling cards.

Geoff Kaufman, of Westerly, former longtime director of the annual sea chantey programs at the Seaport and still performing in folk and maritime music concerts locally and far afield, helped bring Sineti on to the chantey staff in 1992, and later formed a fond friendship with him.

“Don’s nature was to envelop you in his personality,” Kaufman recalled the other day. “He and I developed a way to close the festivals each year. He would sing ‘Rolling Down to Old Maui’ and the crowd would be captivated and then I would sing ‘Leave Her, Johnny, Leave Her’ and the crowd was with us.”

Sea chanteys — the British spelling is “shanties” — attract almost a cult following among fans and performers from here, Canada, the United Kingdom, Western Europe, Eastern Europe and the far Pacific horizon, many of whom came to the Seaport festival to play each summer. I remember two chantey groups from the Netherlands and a group of young men from Poland. The festival was phased out by Seaport administration a couple of years ago and moved to Essex.

Kaufman said Sineti was featured at the Connecticut Sea Music Festival this past June as part of a group called Americana.

Kaufman also said Sineti was severely injured serving in the Army in Vietnam in the late 1960s, injuries that slowed him somewhat in later life, but rarely did he talk about it. “In Vietnam, he was the one person in his squad able to carry the machine gun they needed with them,” said Kaufman, attesting to his bare-armed, barrel-chested image of strength.

Sineti had been in weakening health in recent years.

An interview published by The New York Times in May 1996 included this passage:

“In ’60s coffeehouses he was a folksinger. In Vietnam, he was an infantryman who saw lives lost, land ruined — and got a feeling that he’s never been without since. ‘It’s impossible to go through an experience like that without getting an appreciation of how delicate things are — the environment, human life,’ he said. ‘I came back with a feeling of wanting to make the world a better place.’

“On his return he worked in construction, kept on performing, and took on some issues, including civil rights, but especially, he said, ‘the environment.’”

“It was after the war that Don combined his nascent career as a folk musician with his passion for marine environment,” read the Seaport staff tribute. “He helped found Cetacean Society International, a nonprofit dedicated to educating the public about whales and advocating for this protection.

“He also found a niche for himself singing sea songs and chanties, with a powerful bass-baritone that most definitely required no amplification. He performed with folk groups such as The Morgans and Finest Kind, developing friendships he sustained for the rest of his life.

“He also developed a lasting friendship with Stan Hugill, who was known as ‘the last working chanteyman.’ Stan’s mentorship gave Don a rare gift — a living connection to an era when chanties were actually used for work at sea.”

Sineti, said Kaufman, found love late in life when he married a woman named Mary Dansing Hani. “They married two-and-a-half years ago, and a bunch of his friends, including me, went to his house in Bloomfield and stood outside and sang for them,” he said. “They had a wonderful time for two-and-a-half years. Don was able to realize a greater level of love.”