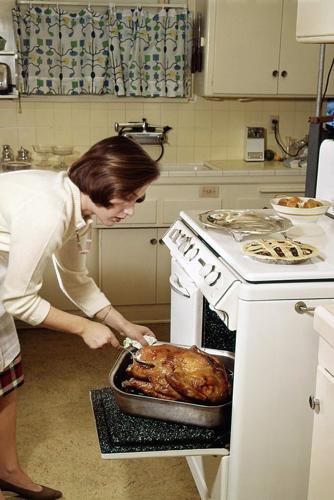 A woman checks a turkey cooking in an oven in the 1950s. (Getty Images) 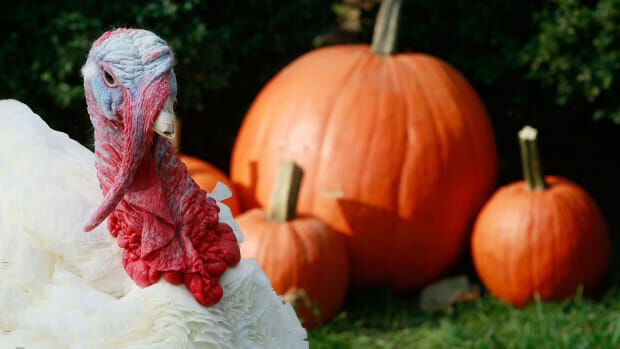 A turkey wanders in the front of the White House before being pardoned.

A woman checks a turkey cooking in an oven in the 1950s. (Getty Images)

A turkey wanders in the front of the White House before being pardoned.

Shameless huckstering for this week’s offering.

We’re going back, again, dipping into a collection of columns and other writing I published last year, to the day, 40 years ago, in November 1982, when I wrote this particular one in the typical frenzy of a late morning deadline for an afternoon paper’s editorial page staff hustling to put out several pages ahead because no one would be working the next day, Thanksgiving.

The Day in New London, an afternoon paper, like The Westerly Sun, for a century, would not switch over to mornings for a couple of years yet, and in those flush times there was a staff of three writing editorials plus another person typing up letters to the editor. The three of us doing the writing occupied one office that can best be described as cozy, on good days.

The deadline was late morning, and on this morning I remember vividly Morgan McGinley, the wise and affable editorial page editor, nervously checking the wall clock above his computer screen as he edited what I had just sent over to him.

Greg Stone, the assistant editorial page editor, who in 2000 would publish his worthy, 500-page tome, “The Day Paper: The Story of One of America’s Last Independent Newspapers,” was at his desk working on his pieces.

Tension was not always the tenor of room, but on this morning, because of the need to produce enough content to cover several days, things were a bit tight. Morgan and Greg, the adults in the room, routinely wrote the serious editorials, from national issues, such as the economy and politics, to state and local topics, such as the economy, politics, zoning, development, schools and education and leaders and noted people, the stuff of daily commerce in our towns and cities.

Generally, I wrote the goofy, or, more politely, lighter ones, poking fun at this or that, or just trying to balance out the more weighty matters tackled by my colleagues. Morgan, as the editor, was responsible for reading everything we produced. The syndicated columns were published pretty much as received.

In any event, I volunteered to do the Thanksgiving one, and whether Morgan trusted me, we were up against deadline when I shipped the following over. As I mentioned, Morgan, editing my piece, kept looking at the clock, trying to figure out, I presumed, whether he had time to come up with something else or just let this one go. He opted for the latter.

Personally, I’m happy he did.

The headline was “Kissing Cousins: Everyone ’round the table is quite a holiday.”

“Aunt Em and Uncle Dwight, down from Hartford, greet the gang and repair at once to Mom and Pop’s favorite chairs. Pop makes them feel at home, and turns on the TV.

“The kids keep their distance. Mom is on the phone with Joe, an older cousin, whose wife, Joan, always brings her famous shrimp dip. There is a problem. Joe wants to know whether Joan can bring dessert this year. Something about a cooking class. They’ll be right over.

“Fine, says Mom, eyeing her two steaming apple pies and handsome cranberry cake. She is also watching Sally, her younger sister, get up and open the oven to test the roast. ‘Not ready yet,’ coos Mom from 20 paces, in a voice devoid of holiday cheer.

“Mom and Sally waltz out of the kitchen and into the living room where David, Sally’s middle one, has been mixing himself a stiff one.

“Sally asks Ralph, her husband, since when a high school junior helps himself like that, and Ralph, whose heart is with Detroit, can only curse the quarterback.

“Mom tells Pop it’s time to carve, and this time not to butcher things. Phyllis, Mom’s older sister, starts the annual chorus of getting Mom to sit down and letting someone else lend a hand, to which Mom replies this is all her pleasure and would everyone simply take a seat.

“Ricky, who has learned to walk, bumps the card table set up for the children, and the gravy takes a spill.

“John, the brother-in-law whose ulcer was the table talk last year, reminds Mom about his condition and asks Mom what she’s prepared for him. Mom, who takes her meals to heart and not without a sense of pride, prepares to pass a sour tomato when Gramps, who likes his wine, proposes a toast.

“The children quiet down. Mom and Sally have a few last words. Phyllis says the table looks beautiful. Ralph says the Lions look awful. Pop says the roast looks raw. Gramps says, look at us, and then offers a thankful blessing.”

As Musk is learning, content moderation is a messy job

At Westerly Library & Wilcox Park: Start a wondrous journey with a library card