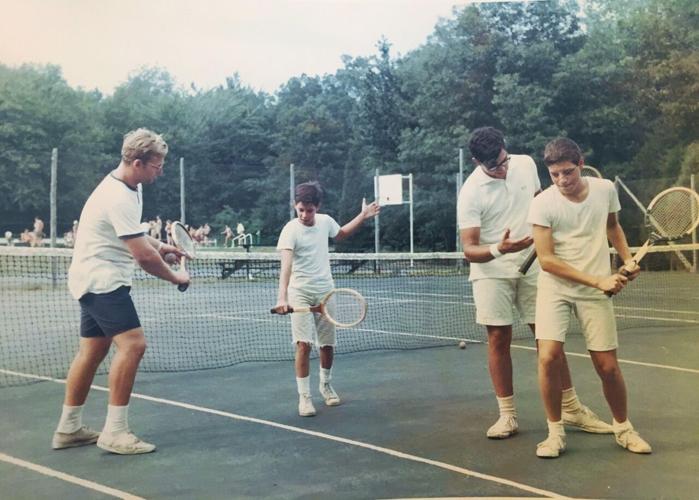 The author, left, at age 19, teaching a camper the finer points of a backhand (his worst stroke) in the summer of 1966 at Camp Hadar in Clinton, Conn. (Courtesy of Alan Kleiman) 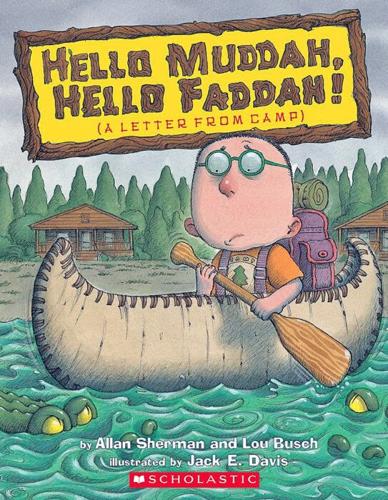 A children's book based on Allen Sherman's classic 1963 song about summer camp.

The author, left, at age 19, teaching a camper the finer points of a backhand (his worst stroke) in the summer of 1966 at Camp Hadar in Clinton, Conn. (Courtesy of Alan Kleiman)

A children's book based on Allen Sherman's classic 1963 song about summer camp.

From my dodgy past a cautionary tale for parents intent on sending the young ones off to camp this summer.

You never know how well the counselors and staff are screened or just who is awaiting the arrival of campers.

It was the summer after my first year in college and I was hired at Camp Hadar in Clinton, Conn., as tennis instructor by virtue of my playing high school and college tennis.

That was not the problem. I had no experience as a cabin counselor. Neither did I have a clue about managing eight adolescents as well as a surly and insurrectionist junior counselor, a portly fellow from New Haven named Nathan and, after a week or two, Fat Nat.

My charges were mostly kids from New York and several from Connecticut, and the majority had been to camp before — in fact, this camp.

I was the cabin’s senior counselor.

The co-ed camp, run by Max Kleiman and his wife Phyllis, offered all the usual amenities including crafts, lake swimming, sports, a rifle range, nature hikes, musical and drama productions and outings. It was advertised as fun-filled and fresh air.

All began breezily enough. I tended to my duties as tennis instructor but had taken an immediate liking to the shooting instructor, a camp veteran, whose younger brother was in my cabin. I spent my first weeks doing a lot of practicing at the rifle range.

Camp life was agreeable. The food was good, the company amiable and there were opportunities to travel. Cars were available in the evening for moonlight drives for pizza, and, as it happened, nuzzling in nearby Old Saybrook.

Little did I suspect what Nat was contemplating. He was 16, and had risen through the summers from camper to junior counselor, and perhaps resented serving under an 18-year-old outside hire with no experience but a good serve. At first, he worked with the boys without complaint and earned my commendations.

Though I was new to protocol, I was more than willing to be creative.

One weekend, for instance, I was assigned to take Nat and the boys by station wagon to Maine for an overnight in tents.

Reaching the designated forest in the late afternoon, I accidentally drove the vehicle over a stump just off the road. The car was stuck. Needless to say, I was a bit distraught. Nat looked sympathetic.

While we all rocked the vehicle loose, I wearied at the thought of pitching camp in the dusk and decided my young crew would much prefer a day at the beach to a night under the pines. So we turned around and drove all night to Cape Cod. We arrived as the sun came up and collapsed the day away blissfully on the dunes.

Nothing was said about the detour to the Cape or the side trip over the stump. Several days later, however, Max asked for an explanation. I couldn’t envision him crawling under the station wagon. (I wasn’t exactly ducking. The car seemed to run OK and the kids enjoyed the day on the Cape. Why pester the director?) Then it occurred to me: Fat Nat.

By now, the cabin was festering with dissent. Nat had his followers and I had mine.

Next came parents visiting day, a beastly hot Sunday, three weeks after I had begun to let my beard grow, an afternoon on which for some reason I wore a khaki shirt with the sleeves rolled down.

My girlfriend, the rifle instructor, her younger brother and Nat greeted her parents first, chatting away, as they must have done on similar days in previous years. But something was amiss. My girlfriend told me later, that her parents, who lived in Queens, N.Y., and, as I would one day behold, covered all their furniture in plastic, thought I was a junkie. Why else, they confronted her, would I have my sleeves rolled down?

Irresponsible, more than likely; junkie, no.

Fat Nat and I, post parents’ weekend, were headed for a showdown.

For all my laissez-faire philosophy about what camp experience should be — for the campers, too, you understand — I insisted on a neat cabin. There was some kind of camp award, extra dessert or announcement to be made about the tidiest quarters, and I thought we should win that praise. Something to write home about.

I was all about hospital corners. The bunkeroos resisted, then protested. Fat Nat consoled them, then urged them to go public. Postcards went out. Little Kenny from Astoria. Little Mitchell, my girlfriend’s brother. They sent sob notes home to Queens about excessive discipline. The junkie’s gone mad.

The cabin turned into a war zone. Fat Nat and the seasoned urchins from New York against me and my Connecticut loyalists.

Finally, Max, the director, removed Fat Nat, assigning him to an adjacent cabin. Several campers went with him. I did a lot of target shooting.

Labor Day arrived, and as the campers departed, and the counselors stopped by the director’s office for the farewell and expected tips, Max merely shook my hand and then his head. I presumed he confiscated my tips, if in fact there were any.

I told him I’d enjoyed myself. That didn’t appear to humor him. I was not invited back.

Nat, I’m sure, would be there the next season. That corpulent Iago would be rewarded with what he deserved — to be a counselor at summer camp.

Study: Trying to stave off loneliness during COVID? A partner is essential.

Truck driver acquitted in deaths of 7 motorcyclists in 2019

Too much victory? Brawl breaks out on Block Island Ferry after long weekend.

Letter: Golf course plan is a wolf in sheep’s clothing