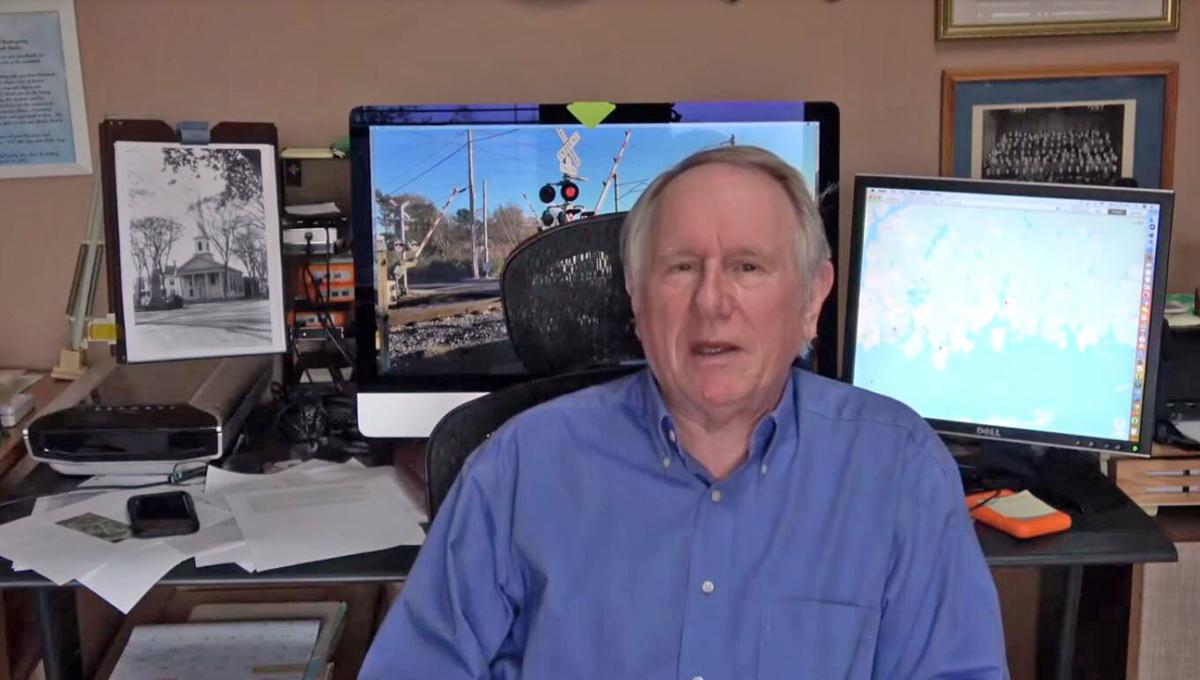 Keith Barker of Groton, a retired University of Connecticut professor, is producing a series of YouTube videos about the history of the region's rail crossings. He was inspired by a British television series on railroads that he viewed while in his native land on sabbatical from UConn. From Keith Barker's "At Grade" 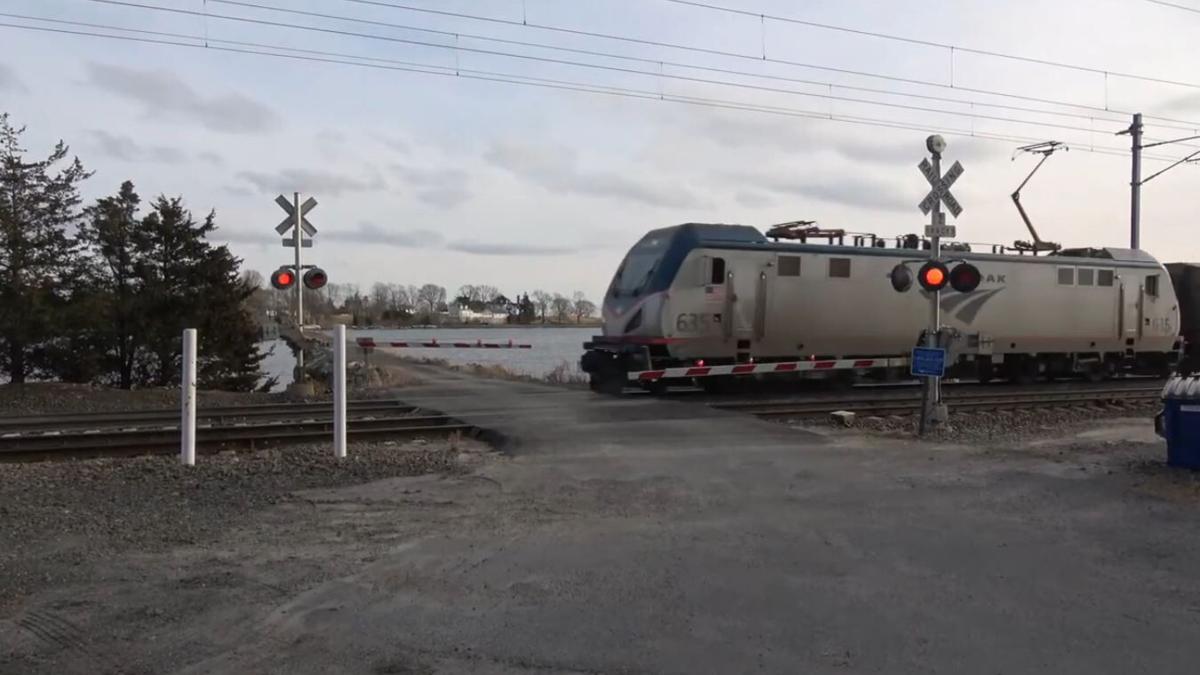 A train passes zooms past the Elihu Island rail crossing in Stonington Borough. Courtesy of Keith Barker "At Grade" 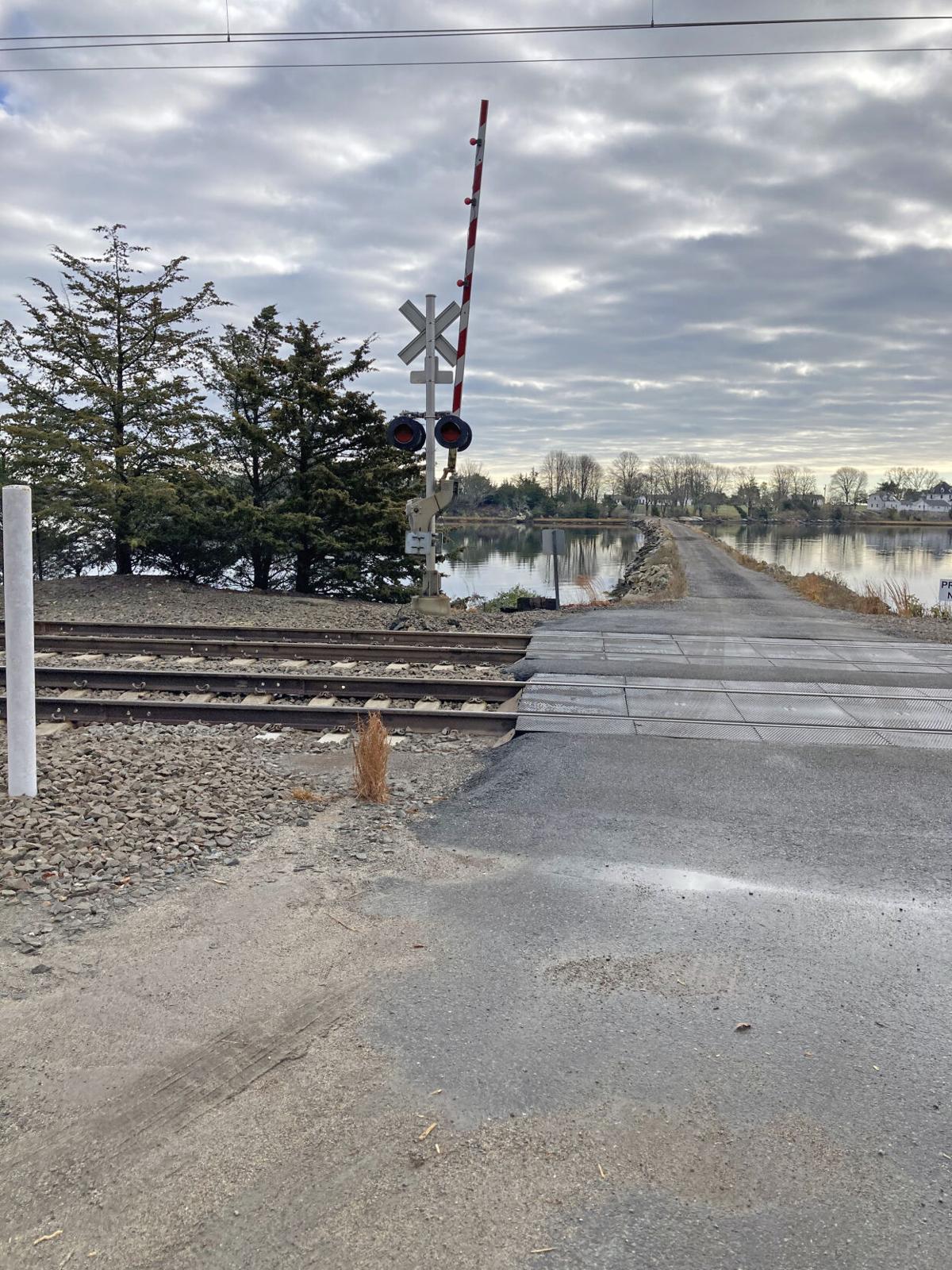 One of the railroad crossings profiled by Groton's Keith Barker in his "At Grade" YouTube series is the one adjacent to the Elihu Island causeway. Steven Slosberg, Special to The Sun

Keith Barker of Groton, a retired University of Connecticut professor, is producing a series of YouTube videos about the history of the region's rail crossings. He was inspired by a British television series on railroads that he viewed while in his native land on sabbatical from UConn. From Keith Barker's "At Grade"

A train passes zooms past the Elihu Island rail crossing in Stonington Borough. Courtesy of Keith Barker "At Grade"

One of the railroad crossings profiled by Groton's Keith Barker in his "At Grade" YouTube series is the one adjacent to the Elihu Island causeway. Steven Slosberg, Special to The Sun

As our most affable and pleasantly spoken narrator, director, editor and, to the point, engineer, Keith Barker, explains, it was on sabbatical in his native England several years ago that he became absorbed with a British TV series looking at railways in the Victorian 1840s and today.

It rekindled a childhood interest in trains, as well as other means of travel on rails, and spirited him to explore public transport in southeastern Connecticut, principally the history of rail travel between Westerly and New London and long-ago trolley service north to Norwich and running between towns along the coast.

As a result, he’s posted two thoroughly entertaining videos on YouTube about this pursuit, each 20 or so minutes long, and is working on a third, one that will complete the journey from Mystic to New London. He calls the series “At Grade,” and viewers may find them here:

Barker, who lives at Mumford Cove in Groton, was born during World War II in 1942 in Yorkshire, England, and took a degree in electrical engineering at the University of Sheffield, followed by a Ph.D. in 1966.

He came to the University of Connecticut in 1982 on sabbatical leave, was offered a position at UConn, went back to the UK for a year and returned to UConn in 1984 to stay. He taught in the school of engineering, spent six years as associate vice provost and 14 years as a professor in UConn’s School of Education.

It was back in England on sabbatical from UConn that he watched the TV series presented by Michael Portillo, a British journalist, broadcaster and former politician, called “Great British Railway Journeys” and “Great Continental Railway Journeys.”

He also got hold of a compendium entitled “Bradshaw’s Handbook: 1861 Railway Handbook of Great Britain and Ireland,” detailing all manner of rail systems, schedules, railway villages and what not.

Inspired by what he watched and read, he set about exploring the rail systems in this region with an engineer’s eye for detail, connectivity, topography and technology, but also with a historian’s devotion to the evolution of public transportation over three centuries, admitting, as he did the other day in conversation with me, that history likely was his least successful subject in school.

He’s made up for that lapse.

Beginning at the Westerly rail station with the advent of the railroad in the 1830s, Barker chronicles the various depot structures through the years and also notes the existence of the Norwich-Westerly interurban trolley line covering 21 miles to Norwich through North Stonington over mostly private rights of way that ran until the end of 1922, providing eight cars in service for passengers but carrying some freight, particularly coal.

Much of the southbound rail journey that will end 26 miles later in New London will be familiar, but it is still worthy to note that the current Westerly station was built out of stone in 1912-13 for the New York, Hartford and New Haven line and in the Spanish Colonial Revival style. Today, the rails are exclusively for Amtrak passenger service on either the Acela high-speed line, which does not stop in Westerly, or the Northeast Regional Service, which does.

Entering Connecticut, at Pawcatuck, Barker’s narration covers trolley service in Pawcatuck from 1894 to the 1920s, and briefly looks at the Mechanic Street Historic District, including the at-grade railroad crossing at Palmer Street, with mention of an abandoned spur line that paralleled the existing tracks. He also points out that between 1855 and 1920, seven interconnected industrial buildings arose along Mechanic Street, part of the development of Pawcatuck as an industrial and residential village.

It would be prudent at this point to allow viewers to take the rest of the journey themselves, enjoying the mile-by-mile, grade-crossing-by-grade-crossing, bridge-by-bridge and depot-by-depot visuals, sounds and Barker’s research, all set to low-keyed, New Age background music that does not intrude.

He finds himself sidetracked, as it were, from time to time with other local research projects in his rather engaged retirement. Still he is at work finishing the third segment of “At Grade,” going over this script, planning the filming and pursuing whatever tangents his study of the railroad (and trolleys) and its routes and various owners present.

Anyone with even a passing interest in this backbone of the region’s transportation history should only spur him on.

Practicing Faith: Let a return to church sharpen your faith