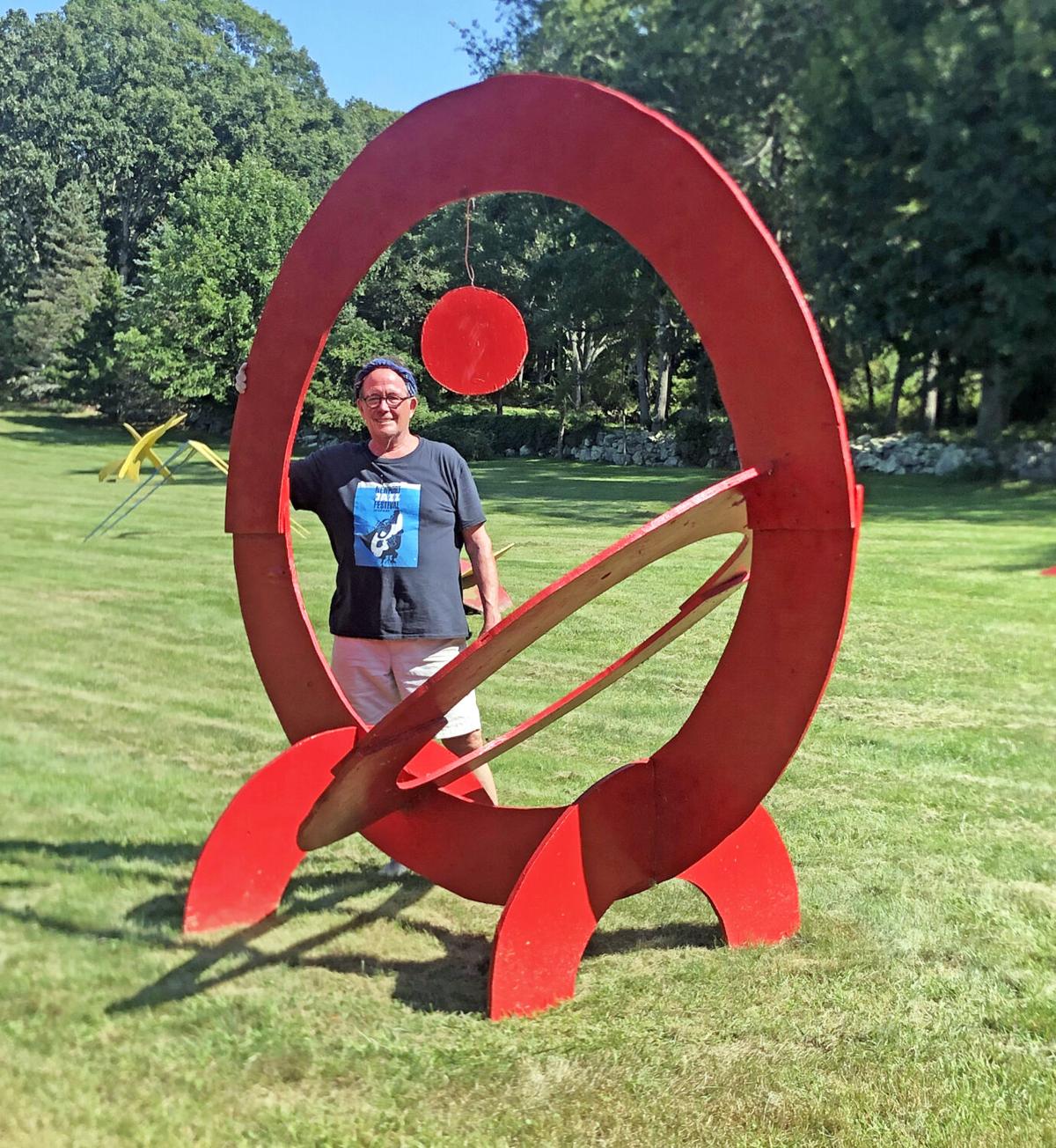 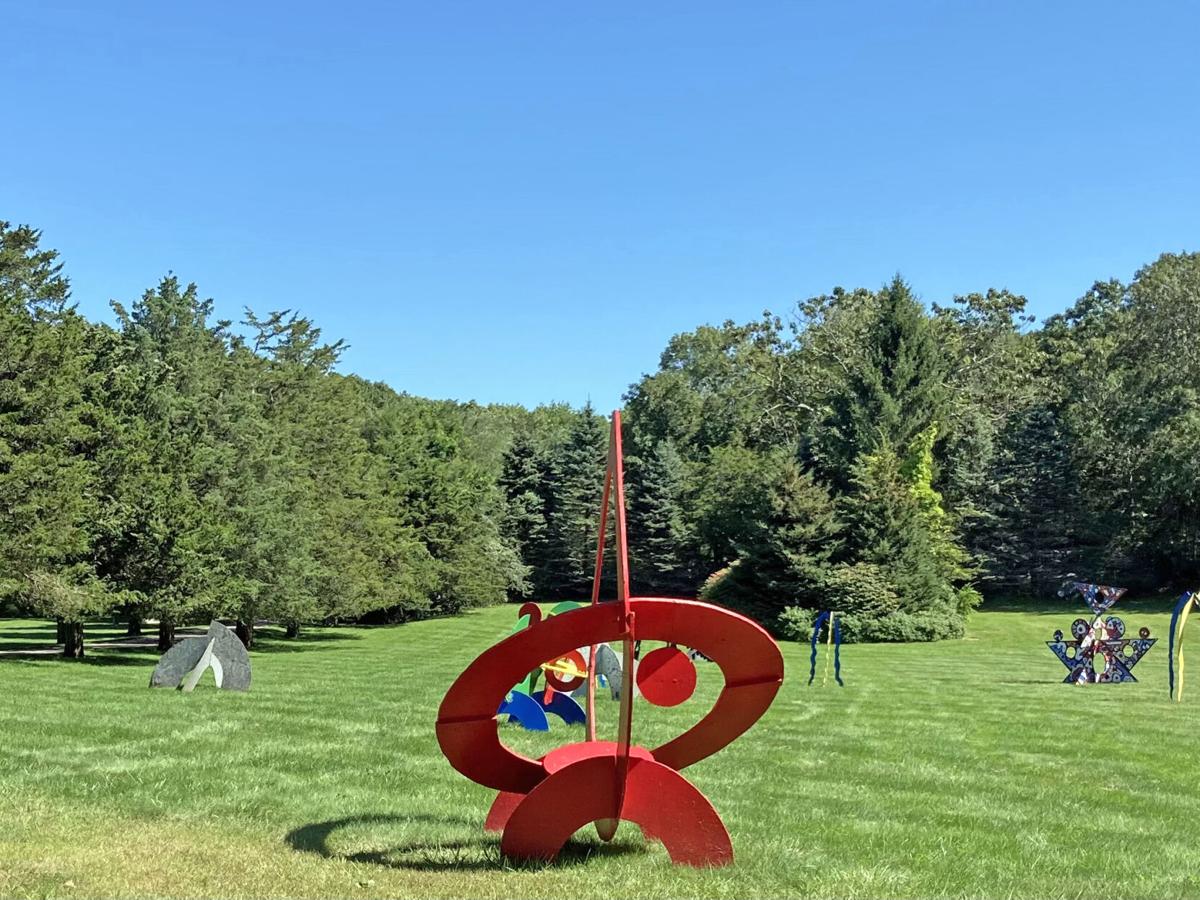 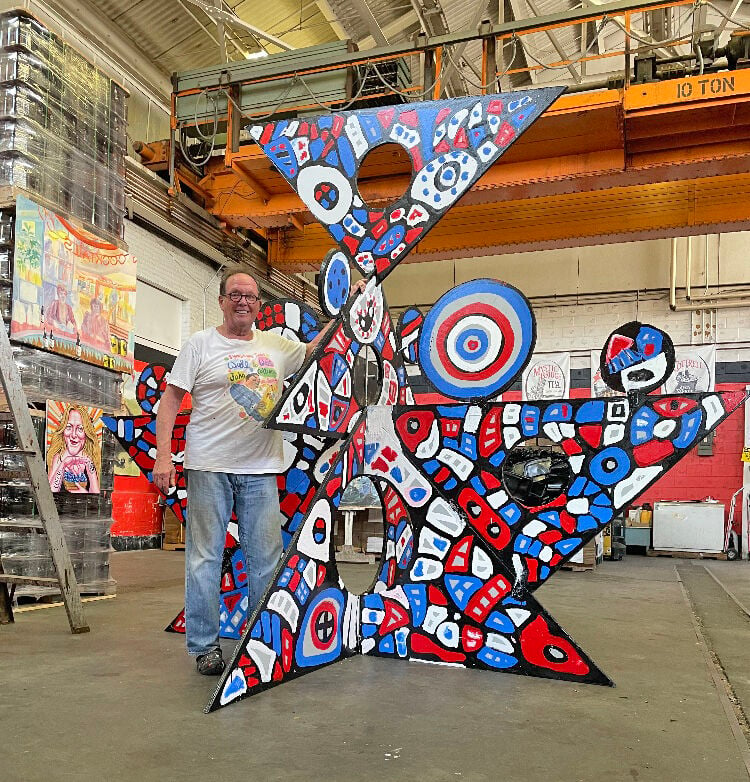 Negotiating Briar Patch Road in Stonington is a driver’s ed challenge, but should the unsuspecting traveler be able, first, to locate the road and then gingerly head along it, minding the curves, granite outcroppings and narrow, tree-choked lane, among the rewards is beholding R. Douglass Rice’s front yard.

It is a green sward the dimensions of a football field festooned with large-scale metal and wood creations painted in primary colors and displayed as they would be in a museum’s sculpture garden, which, for all intents and purposes, this is.

Happily, Rice’s work is also available to the public in settings far less ticklish than Briar Patch Road, which a century ago must have been a cart path for hauling blocks of ice from Sylvia’s Pond to the ice business at Vargas Corners at what is today the area around the Shell station at Route 1 and North Water Street.

Wimpfheimer Park beside the Velvet Mill in Stonington and the Artists’ Cooperative Gallery of Westerly, among other venues in the region, have his sculpture on display.

Another large and angular composition of rectangles and circles and painted in a busy confusion of reds, whites and blues called “Homage a Dubuffet” was part of the recent pop-up art festival at Cottrell Brewing Co. in Pawcatuck. But it was only a maquette, or wooden model. More on maquettes and the real deal later.

Rice, an artist of prodigious energy and output, studied sculpture at Stanford University while earning a degree in human biology in 1974. In the late 1980s, he moved with his family to New York and owned what he calls a high-end residential construction company with 50 employees and at the same time maintained a studio in Tribeca where he devoted himself to painting.

In 2016, he settled in Stonington with his wife, Cynthia Elliott, who, in New York, was president of Symphony Space, a performing arts complex, for 13 years, and is also the daughter of the late Osborn Elliott, longtime editor of Newsweek and then dean of the Columbia University Graduate School of Journalism, who lived in Stonington in his later years.

Shoppers at the Stonington Farmers Market on Saturday mornings at the Velvet Mill or in local supermarkets likely have come across Rice, usually adorned in paint-stained work clothes and wearing his signature bandana around his head or, on occasion, a beret, and greeting folks with a personality as generous as the scale of his sculptures. He also cooks at a soup kitchen in New London two nights a week.

“Scale is very important. The larger the better, but cost is a consideration,” he said in a recent email after I asked him about his work. “That is why I make many of them initially out of wood hoping that a commission will then fund the metal fabrication.

“I have recently made two sculptures and had them fabricated in Absolute Black Granite with a local stone fabricator, Salem Stone.”

Early on during the pandemic, Rice came up with the concept of creating a community he was unable to visit because of social distancing by inviting folk to send him photos of themselves and offering to paint portraits based on the photos and posting them online. More than 100 people responded.

His work is owned by dozens of collectors and similarly has been exhibited in galleries, group shows, solo shows, members’ exhibitions, juried shows and restaurant walls here and afar. He is an elected artist at the Mystic Museum of Art and a member of the Lyme Art Association as well as the Bristol (R.I.) Art Museum and the Westerly Artists’ Coop.

He explained, also by email, how he went about creating “Colliding Worlds,” with dimensions of 8 feet high, 8 feet wide and 6 feet deep.

“The metal sculpture ‘Colliding Worlds’ began on paper,” he wrote. “I work with a 4” x 8” rectangle and design the sculptures so there is little waste. (Aluminum sheets come 4’ x 8’.)

“Using a compass I scribed four half circles. I then did the same on two pieces of cardboard. I made a small model uniting three of the arcs and using the other two as half arc stands. I played with the various pieces over and over experimenting with different forms.

“Once I settled on a few of them, my assistant Natalie Vail who is an art student at UConn helped me as I cut the arcs out of two sheets of 3/4” Marine grade plywood.

“Once we had the pieces cut, Natalie sanded them. I then started screwing them together and cut slots in them so they could interlock on their own. I wanted the largest circle (made from the two largest arcs screwed together) to sit in the two third-smallest half circles.

“Once it was set, we started playing with the second largest circle. My first take was to have it set half way up. At one point it slipped and lodged at a 45-degree angle within the larger circle. Perfect!!! We had a small circle and Natalie had the idea to suspend it.

“Once done I primed the wood and then painted it with two coats of oil-based high gloss Traffic Red paint which is usually used on metal.”

A few weeks ago, he was asked to show sculpture as part of a friend’s art exhibit. He included “Colliding Worlds” and received interest from two possible collectors in acquiring it.

“Though there was no commitment to its purchase I went ahead I sent the drawings and a photo of the work to two different fabricators,” he went on. “I chose Studio 80 in Lyme. It is owned by the sculptor, Gil Boros. I hired his shop and they began the process. They subbed out the cutting to a firm that uses a water jet to cut the pieces from 3/4” 4’x8’ sheets of aluminum.

“Once done, Gil’s crafts people welded the arcs together and cut the slots. The piece is now at a separate company to be powder-coated Traffic Red. It should be delivered within two weeks to my two-acre sculpture garden where I live.”

Steven Slosberg lives in Stonington and was a longtime reporter and columnist. He may be reached at: maayan72@aol.com.