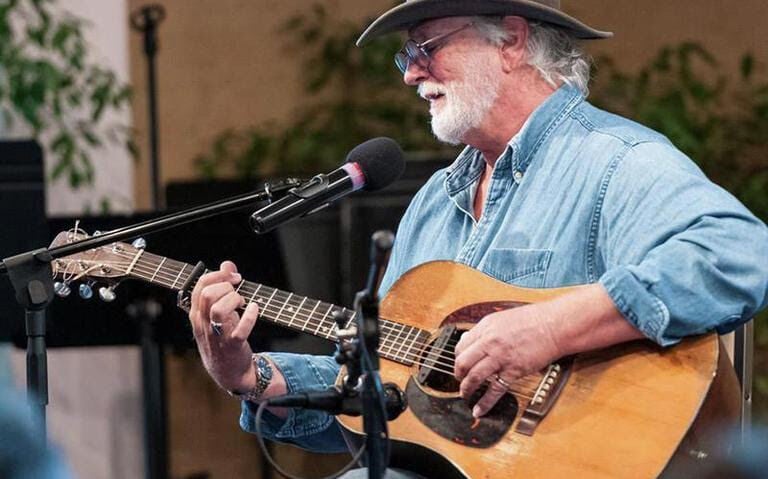 New Hampshire folk singer Bill Staines wrote better cowboy songs than anyone in the Southwest, the Houston Chronicle once opined. Staines, who played often in the area, died Dec. 5. 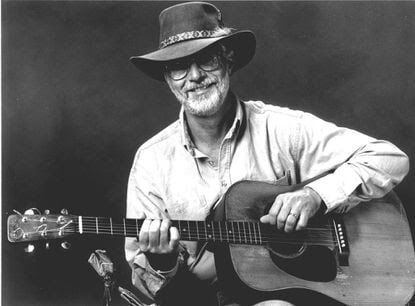 The author and his son, Sam, bonded over the music of Bill Staines, a New Hampshire songwriter and folk singer who died on Dec. 5.

New Hampshire folk singer Bill Staines wrote better cowboy songs than anyone in the Southwest, the Houston Chronicle once opined. Staines, who played often in the area, died Dec. 5.

The author and his son, Sam, bonded over the music of Bill Staines, a New Hampshire songwriter and folk singer who died on Dec. 5.

Missing among the entertainment notables whose passing in 2021 was accorded appropriate ink in publications, both print and online, was a folk singer and songwriter who performed here often and whose death in early December received precious little notice.

Bill Staines died on Dec. 5 in his home state of New Hampshire after living for years with prostate cancer. He was 74.

If you don’t know his music, you haven’t been listening. “The Roseville Fair,” A Place in the Choir,” “Music to Me,” “My Sweet Wyoming Home,” “Child of Mine,” “Old Dogs” and, though I’ve long loved “The Roseville Fair,” I’d say what is likely his most poignant, cycle-of-life concert-closer, “River.”

If you never saw him in concert, you didn’t get out enough. He did all he could to come to you. He routinely played more than 200 dates a year. He played the old Westerly Center of the Arts in what became the Chorus of Westerly building. He played Friday Night Folk at All Souls Unitarian Universalist Congregation in New London time and again. And then there was one memorable afternoon house concert in a technically first-rate music barn in Lyme, Conn.

He played and toured for 57 years, logging, literally, millions of miles on the road and performing virtually everywhere. He was partial to Alaska.

In 2015, Yankee Magazine published a special edition which named Bill Staines as one of the 80 gifts New England has given to America.

Mel Allen, editor of Yankee, and I share an affection for Staines.

Here’s what Allen had to say in that 2015 edition:

“Bill Staines was tall and lean; he wore a cowboy hat with jeans and boots, and his songs were like short stories wrapped inside lilting melodies. They stayed with you like fragments of dreams. Many of his contemporaries wrote songs with an edge; his were rounded, smooth. He sang about the country he had already crossed many times over since he’d begun in the ’60s.

“He was called Boston’s most engaging performer. He was a national-champion yodeler, for one thing — no doubt the first who had been born and raised in Lexington, Massachusetts. Famous singers were covering his achingly sweet and romantic ‘Roseville Fair,’ which he wrote after seeing two young people dancing by the glow of a campfire at a small-town folk festival. He sang of prairies and mountains and rivers. A Houston Post music critic lamented, ‘He’s a New Englander … and damn his soul, he writes better cowboy songs than anybody in the Southwest.’ ”

My son and I, though veterans of the sports ritual, remember best going together to a Staines’ concert in New London. We still talk about it, and it was my son, Sam, who lives in Portsmouth, N.H., who told me of Staines’ death. News did circulate up there. I hadn’t seen a notice anywhere.

Obviously, I mourn his passing.

I knew of Staines’ songs before I knew of him. It was on an evening folk program decades ago on WRIU 90.3 FM, from the campus of the University of Rhode Island, that I first heard “The Roseville Fair” sung by Nanci Griffith, who also died last year. Staines liked to introduce that song by saying it was about falling in love and staying in love.

In the tradition of Elizabeth Cotten, Staines, who was left-handed, learned to play guitar upside down.

On a temperate December afternoon in 2001, Staines, who’d driven from his home in Rollinsford, N.H., to the hills of Lyme, gave what in those bygone days was called a house concert, an intimate setting among maybe a couple dozen invited guests, a perfect venue for folk music.

This particular venue, a barn, on the property of Tom Neff and Lyndon Haviland on Grassy Hill Road, was built by DeCiantis Construction of Stonington, a 28-by-38 foot structure, furnished with 150-year-old barn wood, two heating systems, overhead fans and a post-and-beam construction design that rendered the sound with homey clarity rather than barnyard squeal. The capacity was 75 people.

The couple had their elegant 12-foot tree spruced up with pheasant feathers, plenty of festive cookies and chilled cider and other potables and, just for us guests, Bill Staines as entertainment.

Staines’ voice had a hearth-and-ember timbre that secured the spell in the room against the lowering light of a Sunday afternoon outside. He played for an hour-and-a-half. When he finished, no one hastened to leave.

So I say farewell to him, and I want to do it as Mel Allen did in his Yankee piece, quoting from Staines’ song, “River”:

Someday when the flowers are blooming still

Someday when the grass is still green

My rolling waters will round the bend

And flow into the open sea

So, here’s to the rainbow that’s followed me here

And here’s to the friends that I know

And here’s to the song that’s within me now

I will sing it wherever I go.