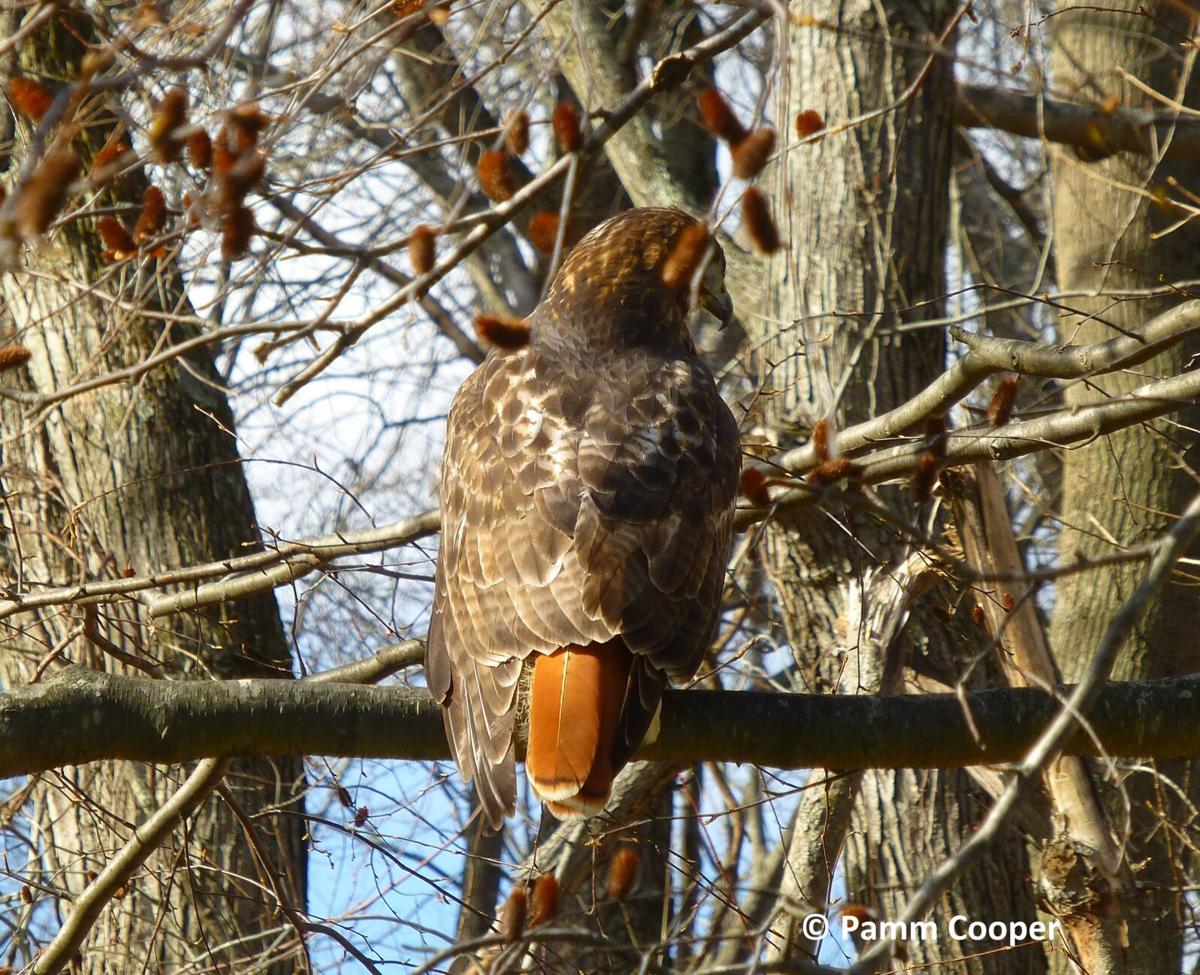 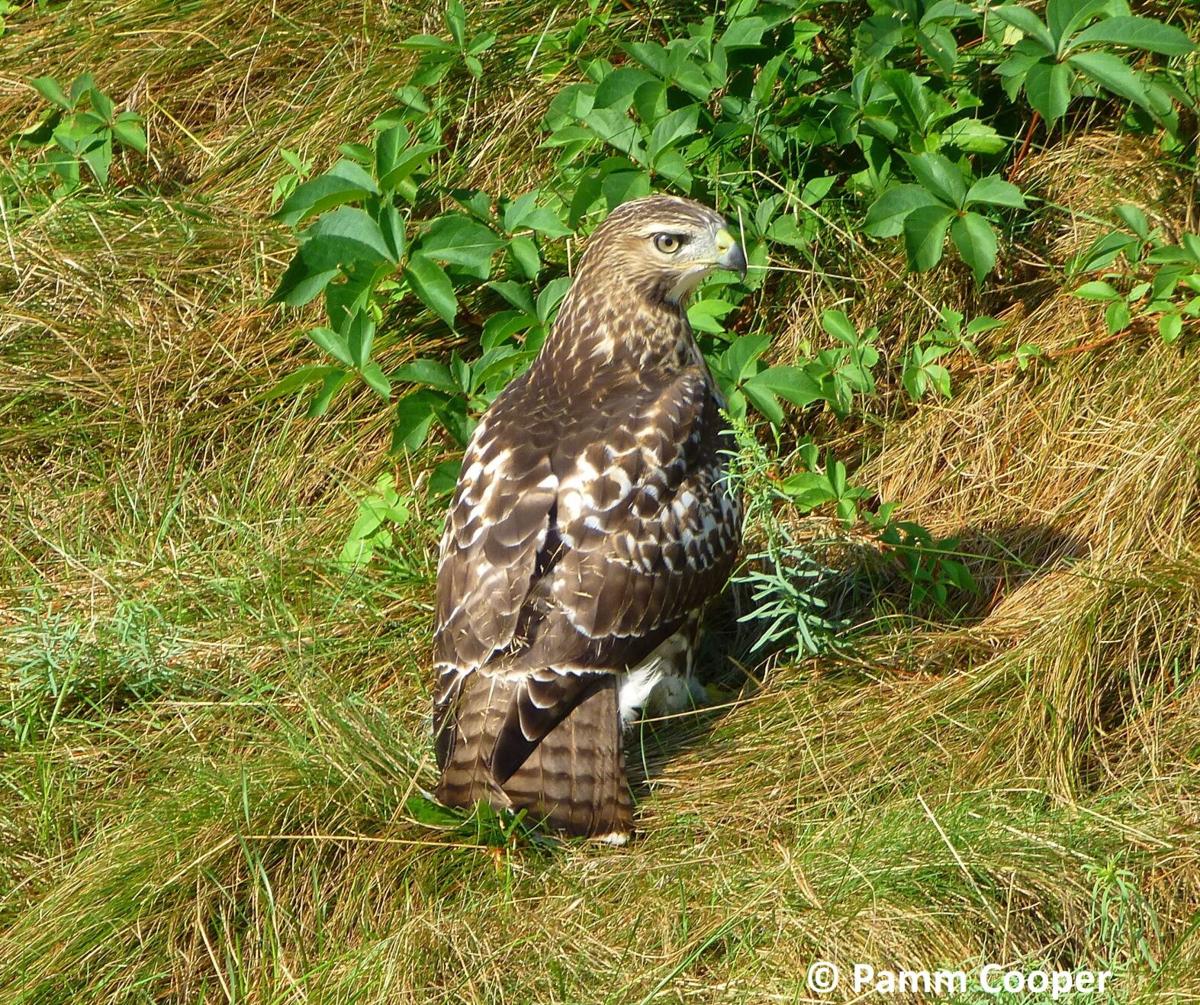 Red-tailed hawks, Buteo jamaicensis, are one of the most common and widespread hawks of North America They get their genus name from the buteo genus of hawks which are known for their sturdy body and broad wings. Their species name comes from the island of Jamaica, where they were first studied scientifically. Besides North America, these hawks can be found in Central America and some Caribbean islands, including Cuba and the U.S. Virgin Islands.

Red-tailed hawks get their familiar name from the rusty brown tail sported by the adult hawks. It is easy to identify an adult either from the air or when perched. The underbelly is white with a broad band of dark brown horizontal streaks across the middle. The beak is short and dark, while the legs and feet are yellow. Generally, birds that are under two years old have bands of brown and white on the tail and develop the classic red tail in their third year.

Red-tails are most often found in open habitats such as roadsides, fields and power lines, which provide an excellent vantage for sighting prey. They are also frequently seen perching on light fixtures and telephone poles along roadways. They soar in slow circles as they climb skyward on thermal updrafts. You may see a bird suddenly stop or seem to hover from a great distance above the ground and then dive straight down to the ground to capture an unwitting animal.

These hawks are generalist and opportunistic feeders, taking whatever prey presents itself. Small mammals such as voles, mice, chipmunks and red squirrels are frequent targets. They will also prey upon other birds, gray squirrels, rabbits, and baby woodchucks. They are often seen perched along highways on lamp posts and trees looking for prey or sometimes fresh roadkill.

These hawks can see a mouse from a height of 100 feet and there is a bony ridge above the eyes that helps block the sun to improve visibility. One thing to note about buteos is that the female bird is noticeably larger that the male. Red –tailed hawks mate for life and both parents are involved in feeding their young. Males feed their mate while she is sitting on the eggs, which usually is for 30 to 32 days. Eggs hatch a few days apart, so all fledglings are not the same size. One may be considerably delayed leaving the nest while older siblings are already able to fly. In the northeast, two or possibly three eggs will be laid. Fledglings leave the nest after 40 to 46 days after hatching. They will fly after another two or three weeks and start catching their own food 6 to 7 weeks after that.

Red-tailed hatchlings and juveniles have blue eyes at first, which turn yellow, and then brown as adults. They have a striped, not a red tail. Young red-tails just out of the nest may be observed pouncing on any object that catches their fancy, such as a small, leafy branch that has fallen to the ground. They may appear to the observer as though they have captured a live specimen until you look a little closer.

For good information on northern birds, the University of Cornell lab of ornithology, the American Ornithologist’s Union, and the Academy of Natural sciences have worked together on a comprehensive reference, “The Birds of North America.” Cornell’s lab of ornithology also has an excellent website that is well worth exploring called All About Birds.