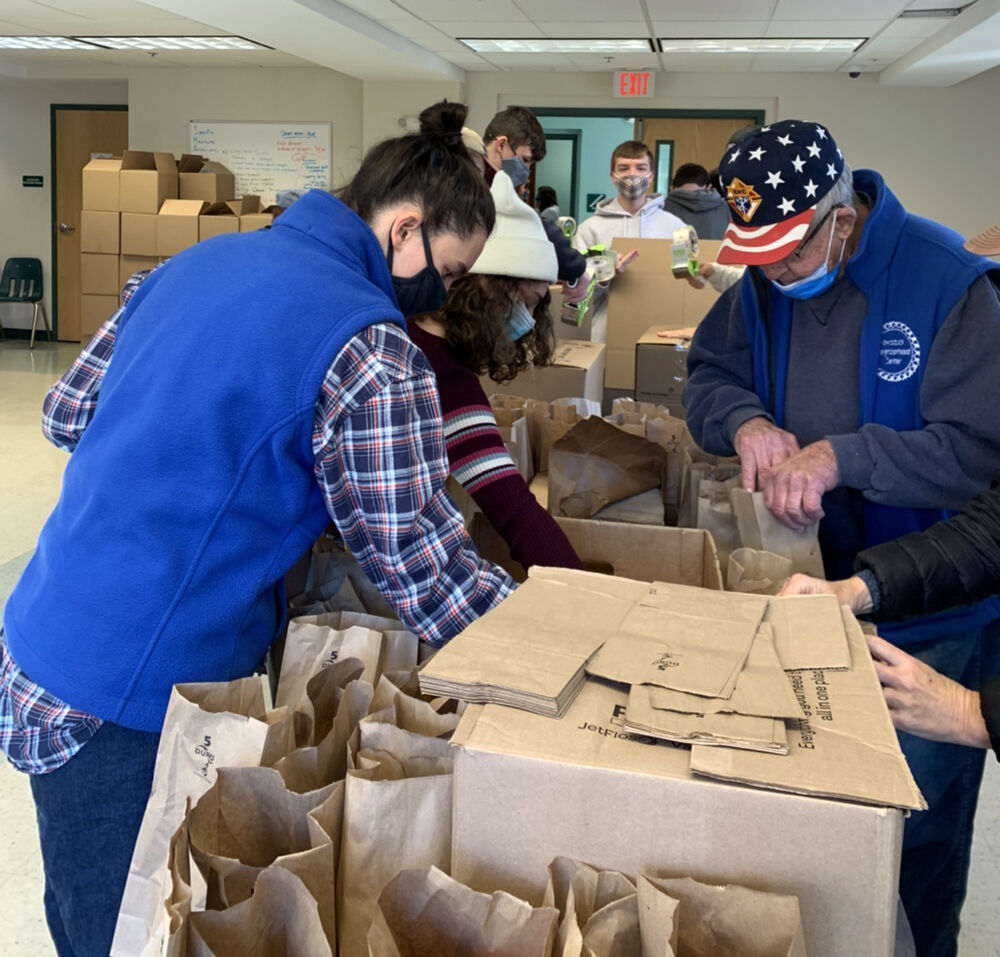 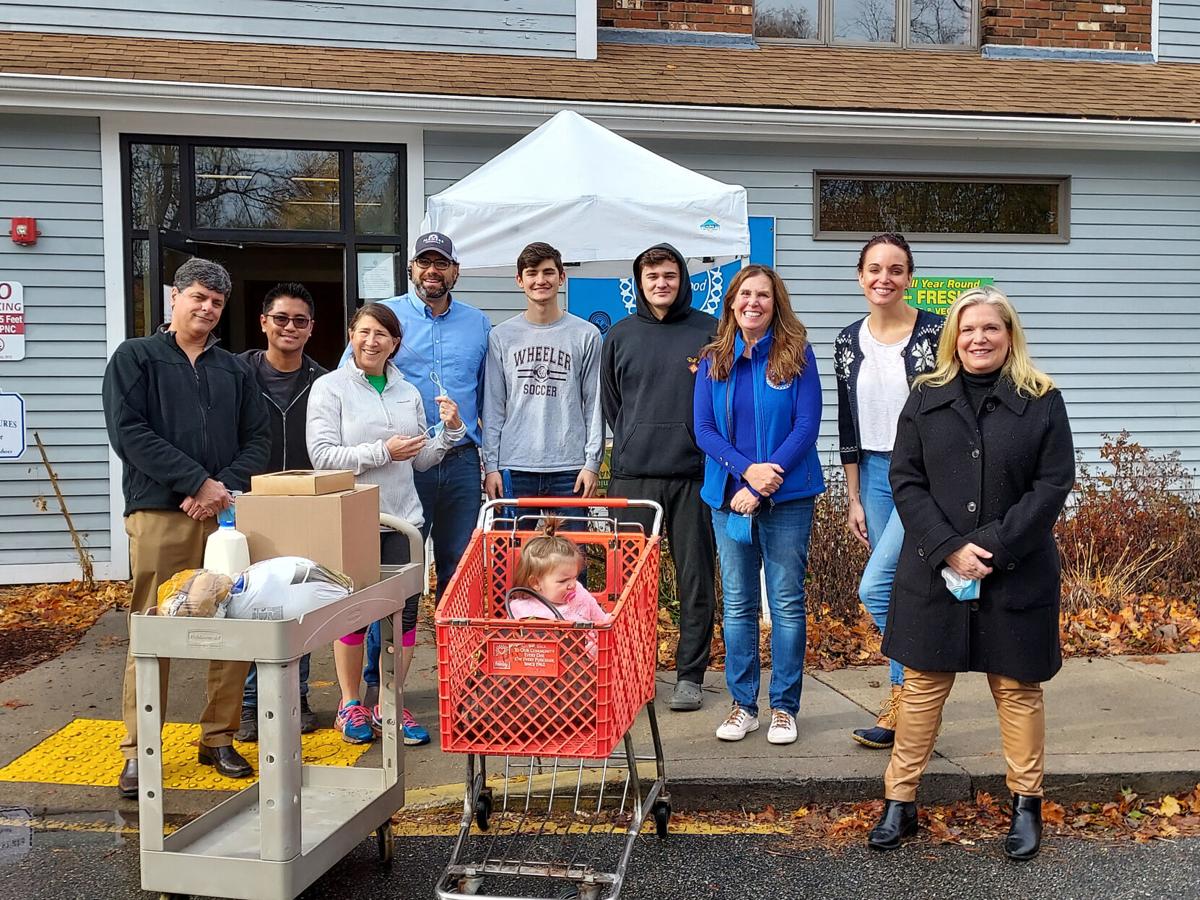 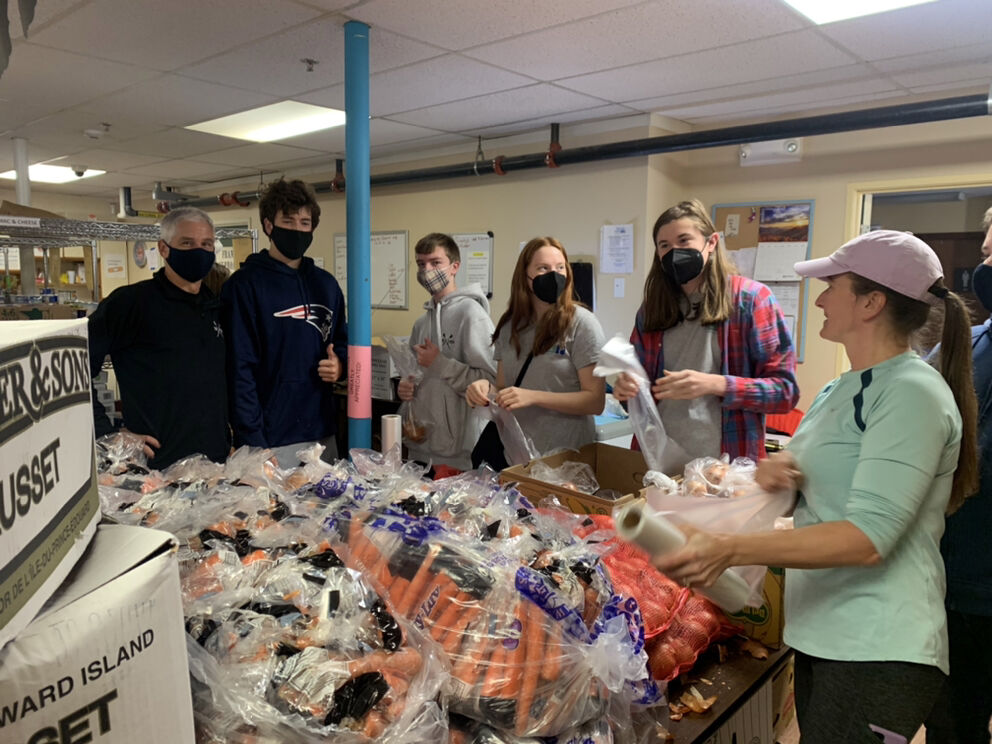 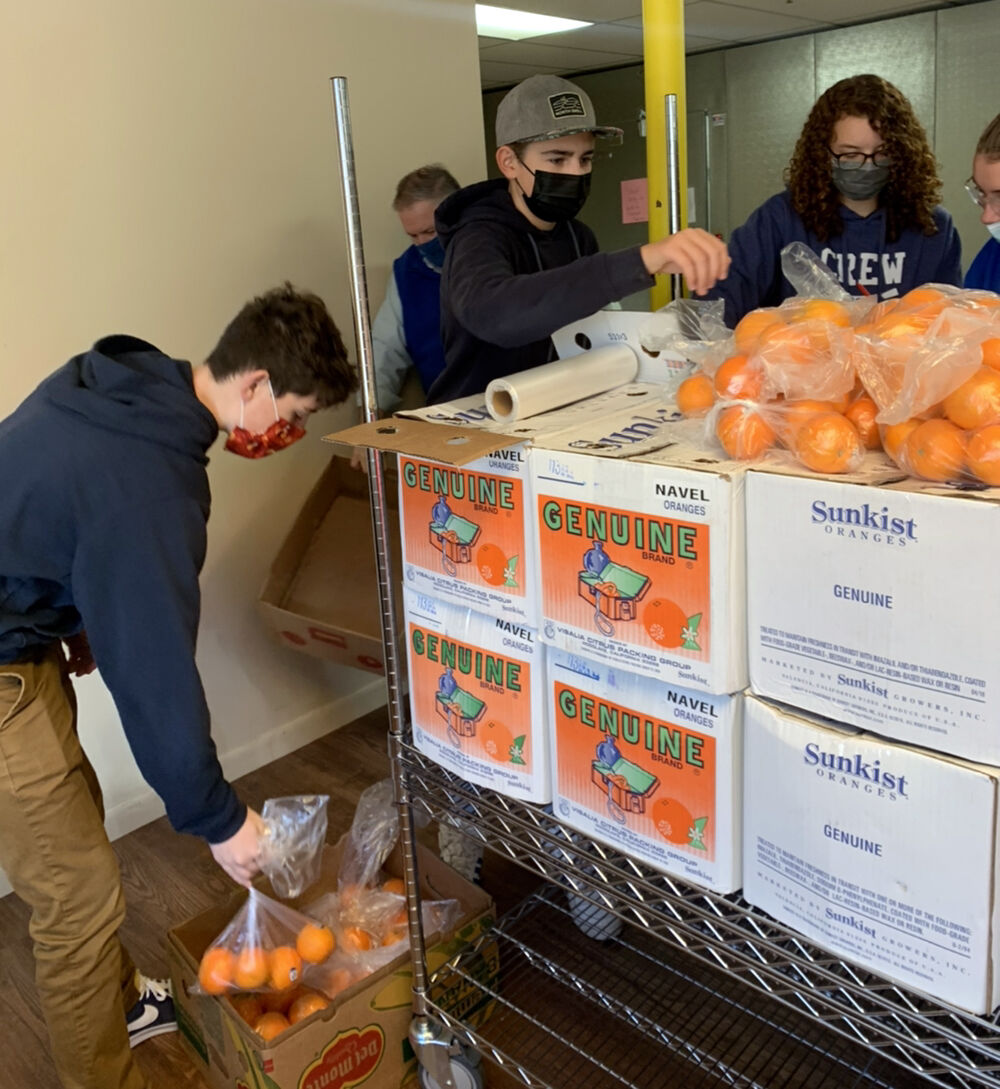 For Pawcatuck Neighborhood Center Executive Director Susan Sedensky and members of the PNC, there is plenty to be thankful for this Thanksgiving.

After the COVID-19 pandemic forced closure of the center in 2020, staff and board members came together to provide a record 525 meals last Thanksgiving despite not having the usual volunteer help that the center usually receives around the holidays. It wasn’t that the center didn’t have people who wanted to help, but Sedensky said safety concerns prevented her from being able to accept in-person volunteers.

Fast forward one year later, with vaccines available and greater knowledge of the disease, and the center was transformed once again this week into a bustling holiday workshop with volunteers from all walks of life.

By the end of the day on Tuesday, with those in need still able to collect their meals through midday Wednesday, the effort had led to Thanksgiving dinners being given to 533 clients, and Sedensky said the center will likely have distributed just under 600 meals by the time Thanksgiving draws to a close. This included 100 meals which were delivered on Sunday to homebound residents throughout Stonington.

“We had about 100 volunteers back this year after not being able to have any a year ago,” Sedensky said. “Prior to the pandemic, we would have as many as 350 volunteers per year. We aren’t back to that point yet but everything this year feels a lot more like it used to.”

Sedensky said she is grateful to the volunteers who were able to help, from state Sen. Heather Somers and former North Stonington First Selectman Michael Urgo to members of student government and other student-based groups at Stonington High School to several senior citizens, many of whom regularly attend activities and spend time at the Pawcatuck Senior Center, which is housed in the same building.

She’s also grateful for the businesses and those who donated throughout the community. In a year where food prices soared and sections on store shelves remained bare, Sedensky said the center was worried about being able to meet the need and as a turkey shortage loomed, it appeared there may not be enough to provide the holiday staple to every family.

That’s when David Eck, a longtime contributor to the food pantry and owner of the Dog Watch Cafe, provided the center with a donation of 300 turkeys. Further turkey donations from other organizations, including Westerly Community Credit Union and Zachry Engineering of Stonington, helped to not only meet the need, but allow the center to begin refilling its coffers ahead of the Christmas holiday, which always has a higher number of requests for assistance.

“I had heard stories from staff at grocery stores of people ordering turkeys in September this year because they were anticipating a shortage. We weren’t sure what we would be able to get, so to have members of the community step up like this was incredibly supportive. It is why we have been able to thrive here for 40 years.”

Across the river in Westerly, staff with the Jonnycake Center of Westerly are on pace to serve 497 households representing 1,310 individuals, as part of a newly-combined Adopt-A-Family holiday meals and gifts program.

The reconfigured program, which was developed as a result of public health concerns related to the pandemic, combined the Adopt-A-Family gift program with the annual Thanksgiving and Christmas holiday meal distribution in an effort to reduce risks and simultaneously streamline the process.

Matt Levy, social media and marketing manager for the Jonnycake Center, said that as of Tuesday, approximately 400 families received a meal as part of distribution weekend earlier this month, and the remainder of those who had requested assistance were placed on a wait list and were expected to receive a meal over the course of the week as more donations came in.

“We are thrilled to say that thanks to incredible support from concerned citizens in the community, we have been able to fulfill all eligible clients who signed up for Thanksgiving assistance before Nov. 19,” he said in an email.

Levy said it was a difficult decision to make the switch, especially when so many were familiar with the separate programs prior to the pandemic, but a growing number of requests in recent years necessitated the move.

Under the reconfigured program, families receive their meal items (minus perishables) and financial gift donations in mid-November to allow parents an opportunity to shop for their children in time for Christmas. The center consolidated the distributions to take the form of a single weekend-long disbursement in mid-November. After distribution weekend concluded, Levy said the center has continued serving families and children who had signed up late and had been put on the program's wait list.

Families of 498 local kids received financial assistance for gifts in 2020.

“This was a tough decision to make, but ultimately we found that this change served the needs of our clients even better than expected,” Levy said. In 2020, an overwhelming majority of clients gave us feedback that the financial assistance and gift cards that they received offered much better flexibility rather than having to rely on whatever physical items we were able to hand out.”

Levy credited volunteers and those who donated for helping make the program come together in a manner that could help those in need. He said the ongoing support is critical to the center’s ability to serve the community.

When the holiday weekend draws to a close and the Pawcatuck Neighborhood Center reopens for normal operations on Monday, Sedensky said center staff and volunteers are prepared to turn their focus to the Christmas holiday and making sure no one is left without a holiday meal and no child is left without a gift under the tree.

Sedensky said she is confident she will once again be able to count on residents to answer the call, to adopt any remaining children for the gift program and to make sure that, no matter their economic status, everyone in town can have a happy Christmas holiday.

“We’ve got so many people in this community who have stepped up to help out, and it is what has allowed us to continue to meet the needs year after year,” Sedensky said. “That’s something I am truly thankful for.”

Both sides ramping up for new state-by-state abortion fight

Connecticut reports its first omicron variant case; may be tied to NYC man