Skip to main content
You are the owner of this article.
Edit Article Add New Article
You have permission to edit this article.
Edit
Welcome, Guest
Home
News
Sports
Obits
Opinion
Photos
Classifieds
Things to Do
Special Sections
More
1 of 8 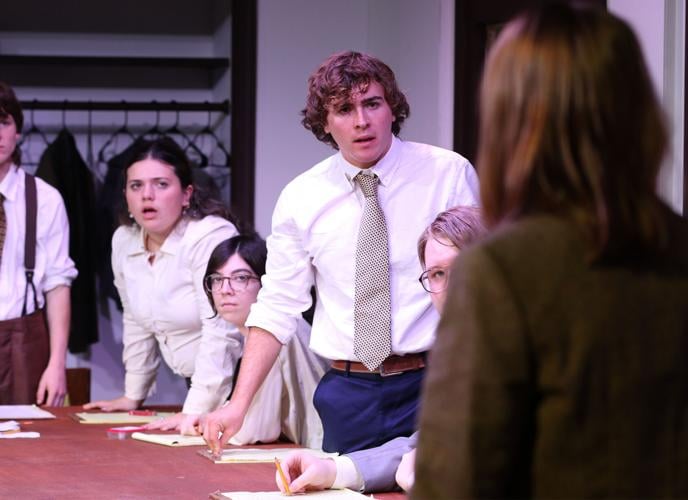 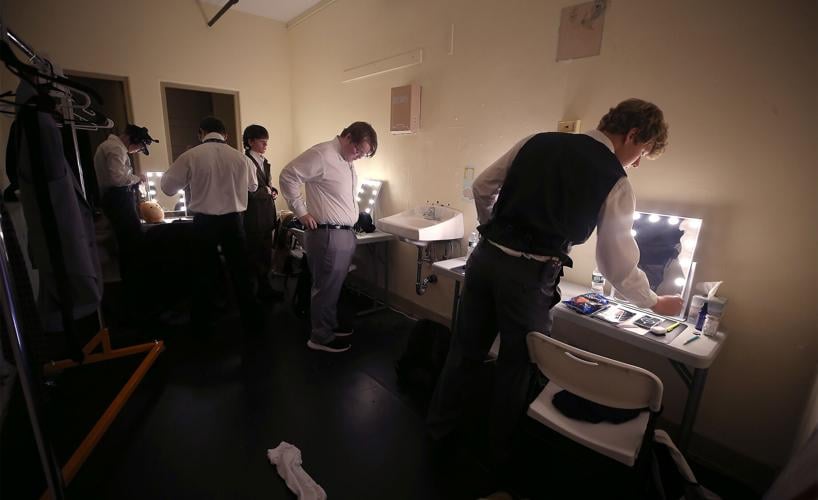 Members of the Westerly High School theatrical group Stagedogs including Dylan Tallardy, right, as “Juror Number 10” and Eric Towne, second from right, as Juror Number 4” prepare themselves for their roles in the school’s production of “12 Angry Jurors”, during dress rehearsal at Babcock Hall auditorium, Tuesday, Nov. 1, 2022. Fellow cast members in background from left are Cyprus Weaver, as a Security Guard”, Nicholas Allario as “Juror Number 12” and Alex Pendola, as the “Jury Foreman”. | Tim Martin, The Westerly Sun 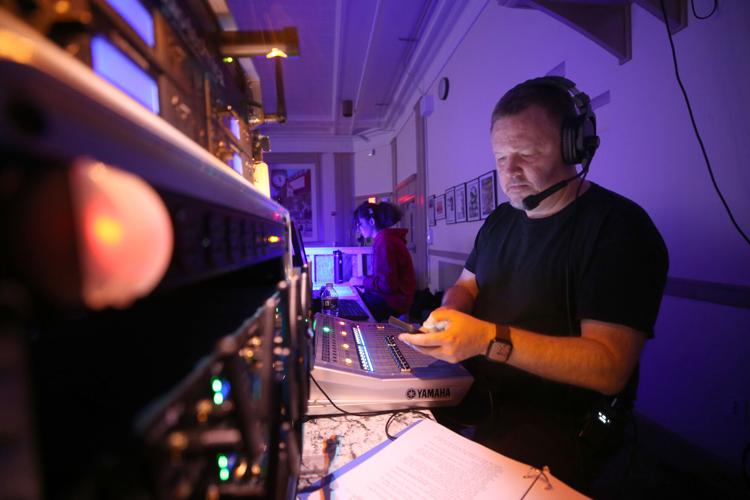 Director Ryan Zemanek, right, getting all the wireless microphones in sync as members of the Westerly High School theatrical group Stagedogs , fine tune their roles in their production of “12 Angry Jurors”, during dress rehearsal at Babcock Hall auditorium, Tuesday, Nov. 1, 2022. | Tim Martin, The Westerly Sun 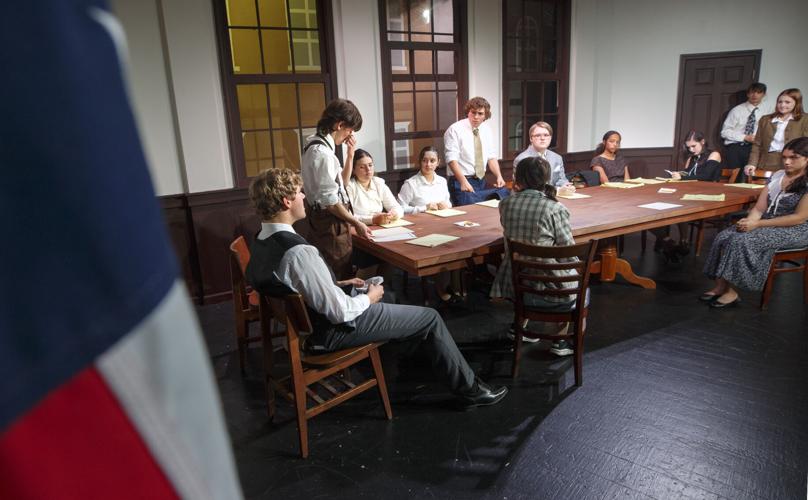 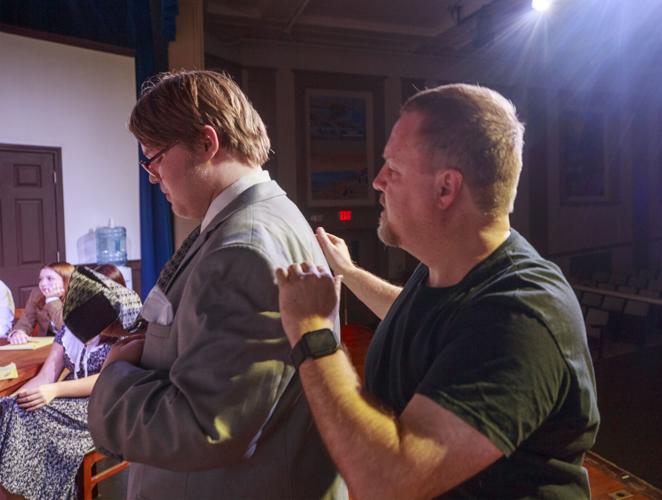 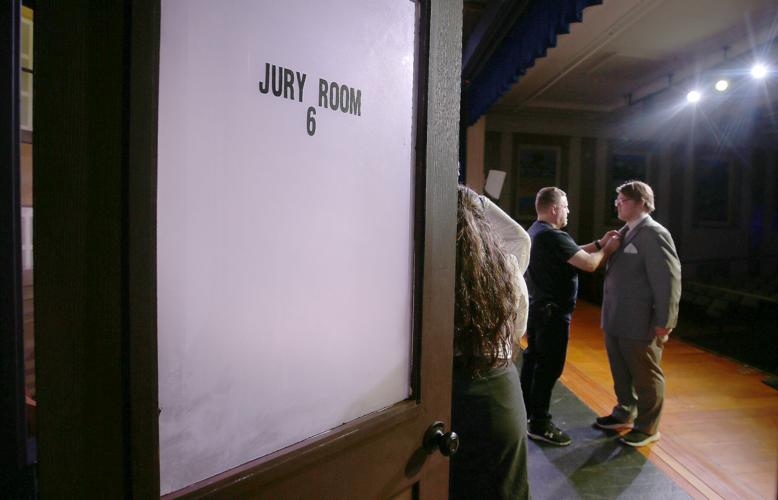 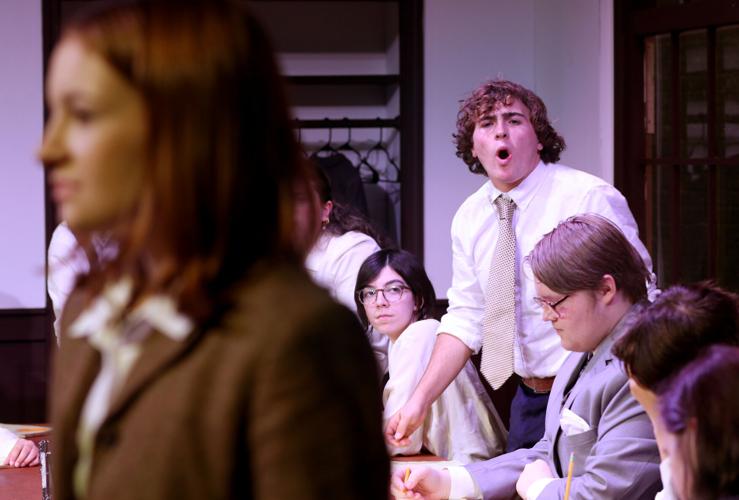 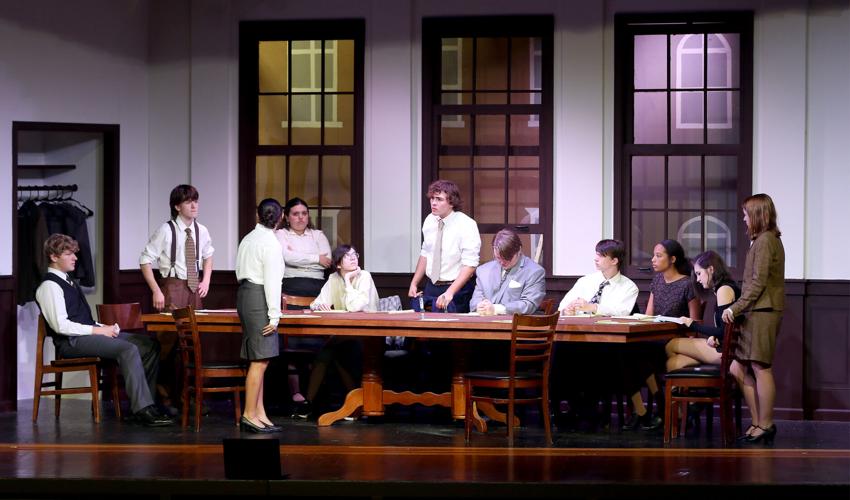 Members of the Westerly High School theatrical group Stagedogs including Dylan Tallardy, right, as “Juror Number 10” and Eric Towne, second from right, as Juror Number 4” prepare themselves for their roles in the school’s production of “12 Angry Jurors”, during dress rehearsal at Babcock Hall auditorium, Tuesday, Nov. 1, 2022. Fellow cast members in background from left are Cyprus Weaver, as a Security Guard”, Nicholas Allario as “Juror Number 12” and Alex Pendola, as the “Jury Foreman”. | Tim Martin, The Westerly Sun

Director Ryan Zemanek, right, getting all the wireless microphones in sync as members of the Westerly High School theatrical group Stagedogs , fine tune their roles in their production of “12 Angry Jurors”, during dress rehearsal at Babcock Hall auditorium, Tuesday, Nov. 1, 2022. | Tim Martin, The Westerly Sun

WESTERLY — Westerly High School senior Kendall Gaccione is fascinated with the power of the spoken word and the complexities of group-think.

Gaccione, 17, who has performed on local stages for much of her life, will play the pivotal role of Juror Number Eight in this weekend's performance by the Westerly High Stagedogs of "12 Angry Jurors," an adapted version of Reginald Rose's 1954 Emmy Award-winning courtroom drama, "12 Angry Men."

The play, adapted by Sherman L. Siegel, is the story of a jury locked in animated argument as members debate the the fate of a young man charged with killing his father. In an interview with the New York Daily News, Rose, who died in 2022, said the play had ''the most intricate plot of anything I've ever written."

According to Rose's obituary in the New York Times, the play "was inspired by Mr. Rose's own stint on jury duty in the Foley Square courthouse in New York in 1954."

In the Stagedogs' production, Gaccione's Juror Number Eight casts doubt on a guilty verdict and tries to sway her 11 fellow jurors.

"I'm really enjoying being the one juror standing alone," said Gaccione. "And to see how impactful people's words can be ... and how they can influence others."

"Kendall is the lone voice of dissent," said Director Ryan Zemanek, who heads up the high school's acting troupe. "She asks us to live up to our ideals and asks us whether the young man is really guilty."

Gaccione and Zemanek were gathered inside Babcock Hall with the rest of the cast and crew one recent afternoon discussing the play and the different roles each juror plays.

Senior Eric Towne, 17, in his first role with the Stagedogs, plays the role of Juror Number Four.

"He hit it out of the park in auditions," said Zemanek, "and he landed a lead."

"I'm a really big fan of the play and I'm really enjoying the cast," said Towne. "It's a real commitment."

"My character is sort of a bully who likes to get her way," put in Cadence O'Neill, 17, a junior who plays Juror Number Seven. "She definitely does not want to be there."

"And I'm Juror Number Ten," said Sophomore Dylan Tallardy, 15, who played Seymour in the high school's production of "Little Shop of Horrors." "He's a sick old man who is a racist and also kind of a bully."

"I know Dylan has great capabilities now that I watch him play a villain," said Zemanek. "This is a much different role than Seymour."

Sophomore Avery Rojas, 16, who plays Juror Number Six, said her character may be timid, but as the play progresses, "she gets braver and finds her voice."

"My character has her own opinions and is not afraid to speak up," said Amy White, 15, a sophomore who plays Juror Number Five. "She sees others as not worth her while."

White, who played the role of Crystal in "Little Shop of Horrors" last year, said it's been a "big challenge to assume such a different role."

"I surprised myself," she said with a laugh.

"I like my part," said freshman Felicity Orlando, 14, who plays Juror Number Nine. "I play an old woman who is kind of defeated by life and feels useless and incompetent."

But Juror Nine is the first character to agree with Gaccione's character, she said.

"She nails the part," said Zemanek. "It's one of my favorite parts."

Freshman Natalie Francese, 14, who plays Juror Number 11, said her character is originally from South America and only wants to blend in.

"But she is also excited to say what she wants," said Francese.

Senior Dominick Lombard, 18, who, like Gaccione, has been acting on local stages for much of his life, said "12 Angry Jurors," is a much more serious than other shows he's acted in.

"It also gives an insight into society," Lombard added. "I'm really proud to be part of it."

On the stage in front of the students stood one long table and 12 chairs inside a room that looked very much like a vintage courtroom. The set was designed by Shane Tallardy, Dylan's father, and was built and decorated by a large crew, including students, teachers and parents.

Zemanek said one of the goals of the drama program is to involves as many different departments and students as possible.

Cyrus Weaver, 16, who plays the role of the Guard, and is one of the play's two stage managers called the cast "insanely talented."

"I think this show is so important for today's audiences," Weaver said.

"The audience will be able to know just what they're thinking," Weaver added. "You can almost see the thought/speech bubbles above the characters' heads."

"People might make assumptions about the play since the characters are all at the same table in the same room for the whole time," said Gaccione. "But this play has so much power that it's just as energizing and alive as a show with many scenes."

"One of the best things about it," added Towne, "is the distinct personalities of the characters. The audience will be able to see that in their faces. I think ninety percent of the show is about the reactions."

"It's not just one person acting," he said. "Everyone is, and that's really cool."

Sophomore Alexander Pendola, on stage for the first time in the role of the Jury Foreman, said he too, is enjoying his role. A second degree black belt and a "Star Rank" boy scout, Pendola, who has long been involved with the musical side of the arts — he has played violin, viola, piano, guitar, drums, ukulele and saxophone — said he is grateful to be involved with the production.

"We have a lot of talent," said Zemanek. "And we have a future. I am confident the theater program will grow and make Westerly into a premier theater school in the state."

"12 Angry Jurors" will be presented Saturday at 1 and 7 p.m. and Sunday at 1 p.m. in the Babcock Hall auditorium. Tickets are $3, $1 for seniors and students. The theater company is dedicating the performances to "the memory of Chris DiPaola, the Voice of Westerly."

"He was a great supporter of the arts and a true friend," the program says.

Editor's note: this is an updated version of an article that appeared in print on Nov. 3, and reflects changes in the cast.