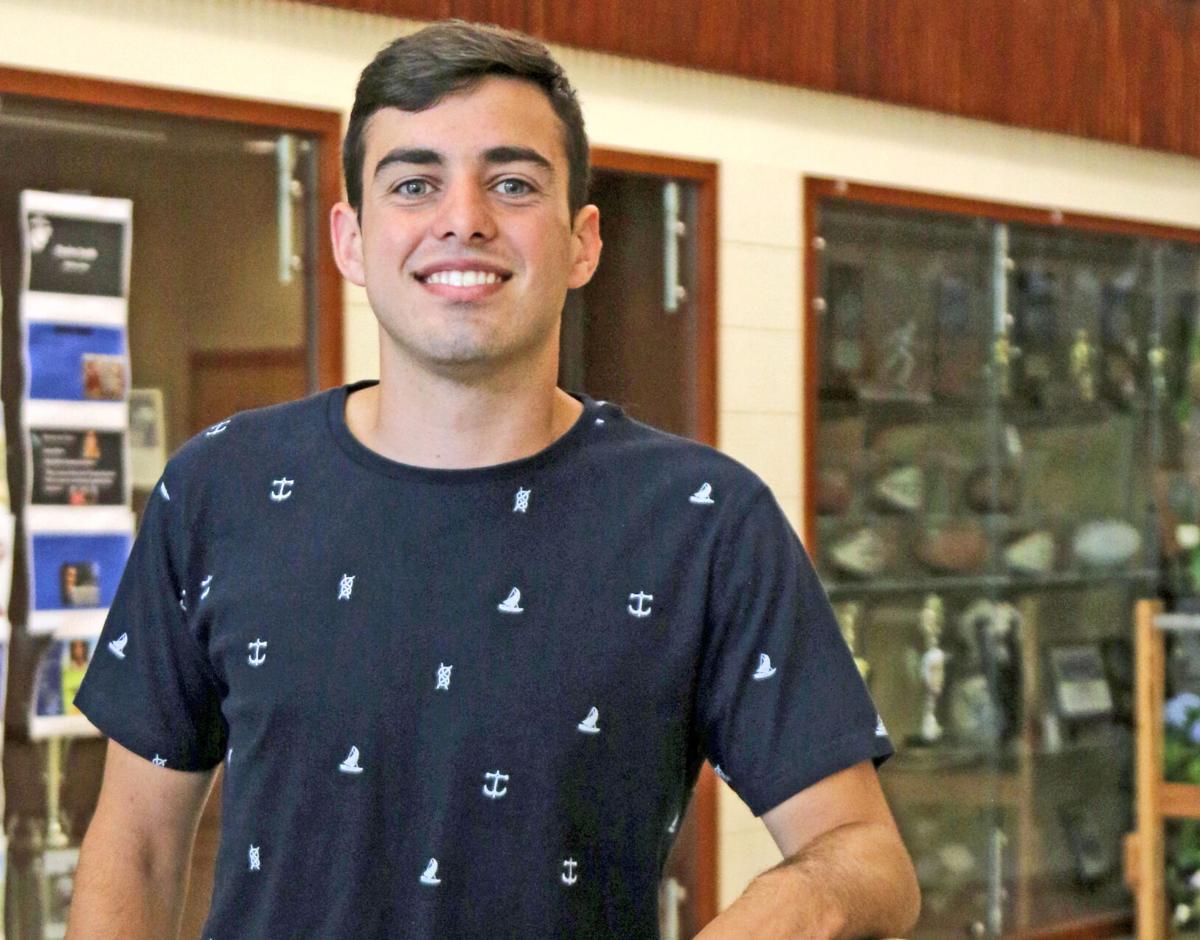 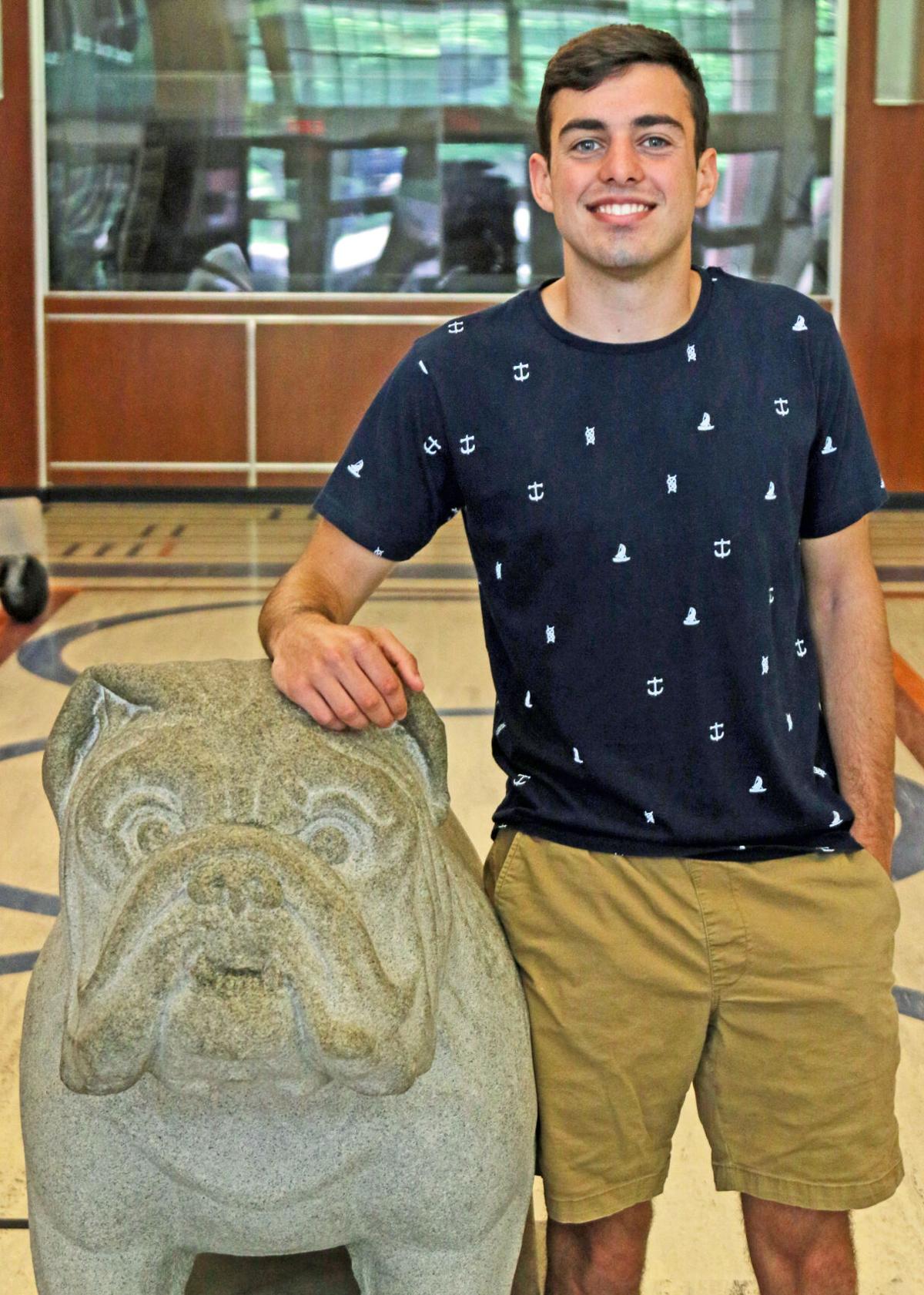 WESTERLY — Adam Gilman entered Westerly High School with his goals a bit dim, but he's leaving as the school's Top Dog for 2021, an award that goes to the graduating senior who teachers and other staff agree put in 100% effort.

Gilman, president of the school's Class of 2021, said in a recent interview that he arrived as a freshman thinking he would work but maybe not too hard, and then after four years do what he really wanted to do — join a branch of the Armed Forces. He was named the class' Top Dog on Tuesday. The award is bestowed annually to the senior class member who teachers and staff agree "gave their all and got as much out of the school as possible. Someone who invested themselves," said Michael Hobin, the school's principal.

"I was an average student. I had goals but they weren't as big as what I am today. I wanted to coast or do a little better than coasting and then enlist," Gilman said, describing his early days in high school.

"Mr. Servidio helped change my entire mindset. He really taught me the importance of the moment just by his teaching style. He showed me to take failures as learning steps and how to translate them to be a better person. He helped me get my priorities straight," Gilman said.

Hobin said Gilman's can-do attitude and refusal to be pushed down by fleeting setbacks all contribute to his "natural leadership. Kids gravitate to him because he has this really sincere and direct and very real quality. Kids will follow his lead just because he has asked them to," Hobin said.

As class president, Gilman was expected to play an instrumental role in organizing senior events — not an easy task during a pandemic.

"There were some setbacks but he was very persistent and worked hard to make sure there were events to help keep the class unified ... he was always the first to think of innovative and creative ways to approach potential obstacles," Hobin said.

Gilman said his class was fortunate to have a large group of supportive parents who helped as everyone tried to move forward through the pandemic. While there were times of doubt, Gilman said, he found reason for optimism.

"I thought, why should I sit and not come up with good ideas or not go and meet with my class officers to make this year fun ... why would I make life and this year even more of a chore when all I need to do is just think a little harder and I can make the year a little better for people," Gilman said.

And so, with the severity of the pandemic waning in Rhode Island, Gilman and the rest of his class enjoyed a fun field day complete with a wild doughnut-eating contest, a prom that was "confusing and frustrating" to plan for but "fun nevertheless" and a "phenomenal bonfire" at The Andrea in Misquamicut.

"In the end, we just wanted to be together and have an opportunity to hang out, and that's what we did," Gilman said.

Living, studying and growing up in a pandemic was hard and sad, but it was also a time of growth, Gilman said.

With a 4.0 grade point average, Gilman plans to attend the University of Rhode Island for its five-year advanced honors environmental science program and hopes to go on to enlist as an officer in the U.S. Marine Corps.

"I've always wanted to serve in the military since I was a kid. If I don't serve at some point in my life, I know I would probably regret it," Gilman said.

A recipient of the Westerly Rotary Club's Youth Leadership Award, Gilman said he first started to develop leadership abilities as a member of the high school soccer team.

"The failures and the ups and downs and how to handle those things helped, and then giving myself more responsibilities forced me to become a leader," Gilman said.

He tried to share the lessons he learned as part of the high school's "Big Buddies" program that sends high school students to spend time with third- and fourth-grade students in the town's elementary schools.

"That was really close to my heart. It was fun. I really enjoyed it and tried to do the same thing for them that Mr. Servidio did for me — teach them not to waste time and to take failures as opportunities for learning," Gilman said.

The youngest of six children, Gilman lives with his mom, Rene and his stepdad, David, and visits his dad, Jim, and stepmom, Deanna. He points to his mother as a major influence.

"I definitely wouldn't be anywhere near where I am without my family, especially my mom. She pushes me to always be a better person," Gilman said.

Gilman was named Top Dog on Tuesday night during the school's baccalaureate ceremony. As he listened to Hobin describe the award during the ceremony, Gilman said he thought, "'Wow, this is going to be great for whoever gets it.' Then when Mr. Hobin said it was me, my heart started racing. I was awestruck. It's an incredible award and opportunity. I'm so thankful to Mr. Hobin and all of the teachers that voted for me," Gilman said.

If the school needed a student to present as its public face, Hobin said, Gilman was an easy choice.

"He's easily identified as someone who is going to go places. He's been an ambassador for the school ... I'm really going to miss him," Hobin said.

PHOTOS: As the crow flies near the moon

Ron Popeil dies at 86; he was the sizzle of American ingenuity, personified