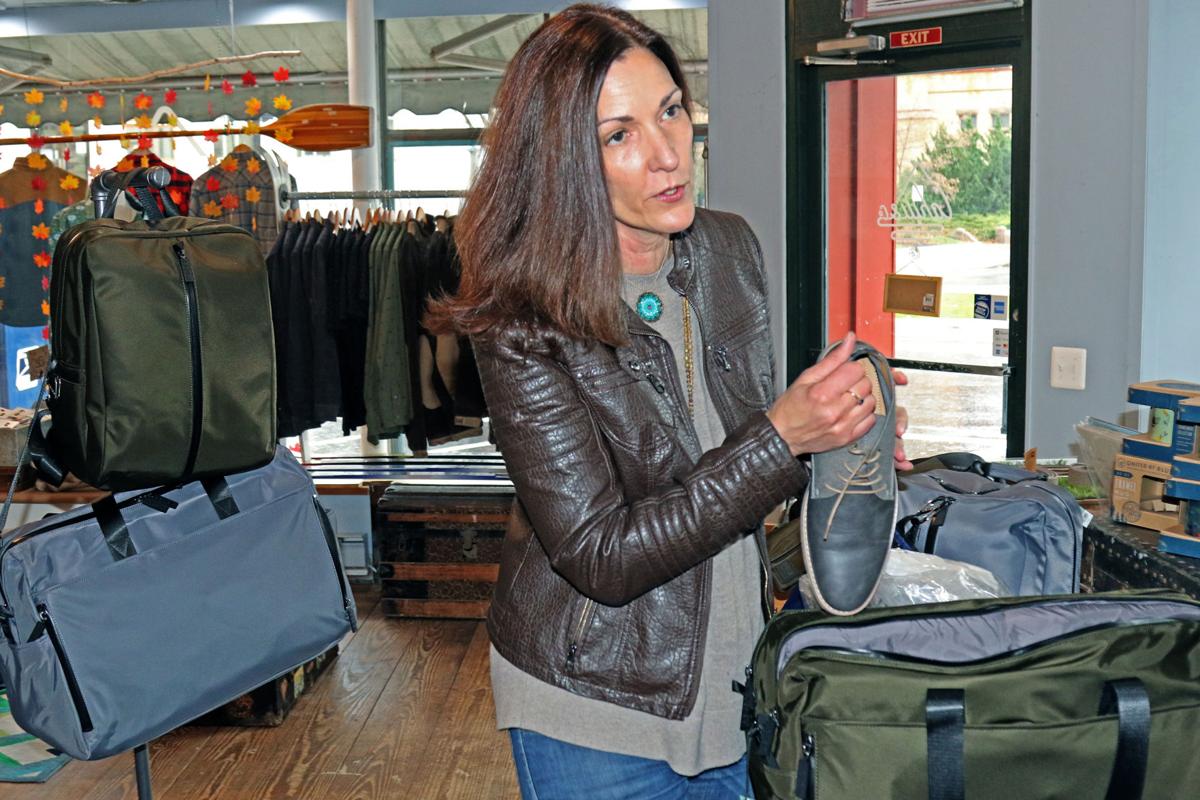 Tracey Cugno, founder of the LEIGH ShoeCase Company, discusses her footwear carrying cases during a visit to Cahill and Company on High Street in Westerly. Harold Hanka, The Westerly Sun 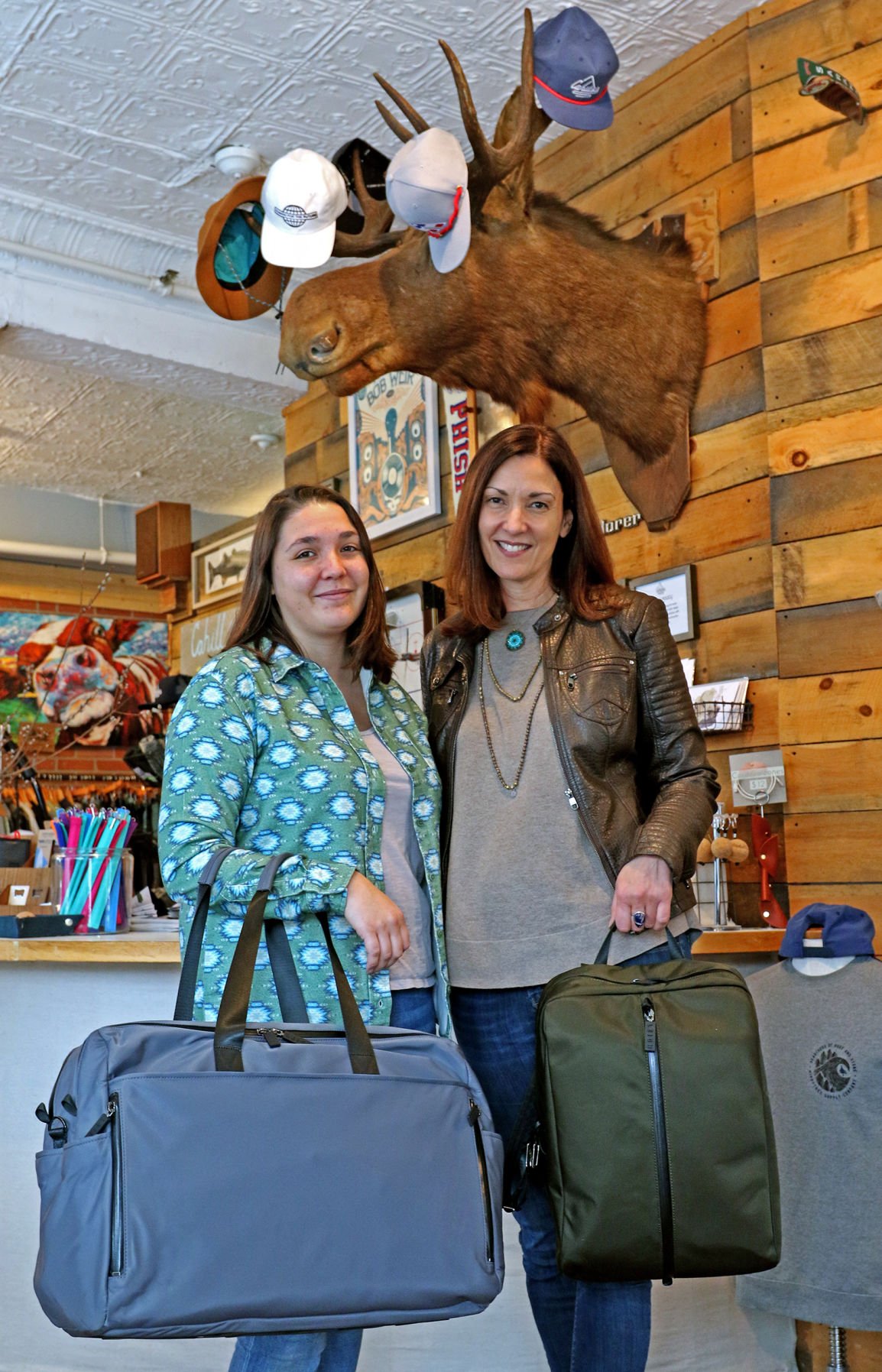 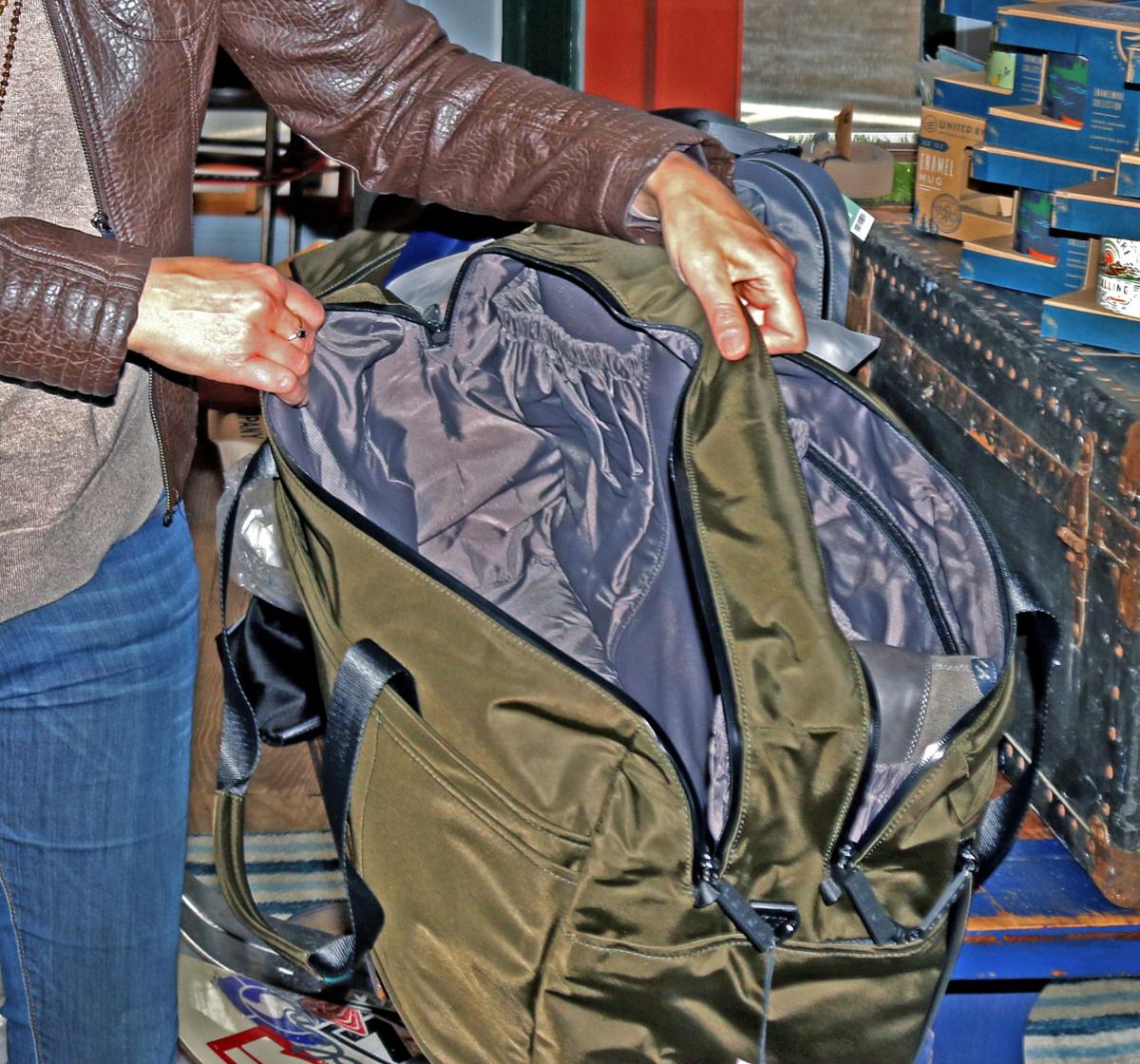 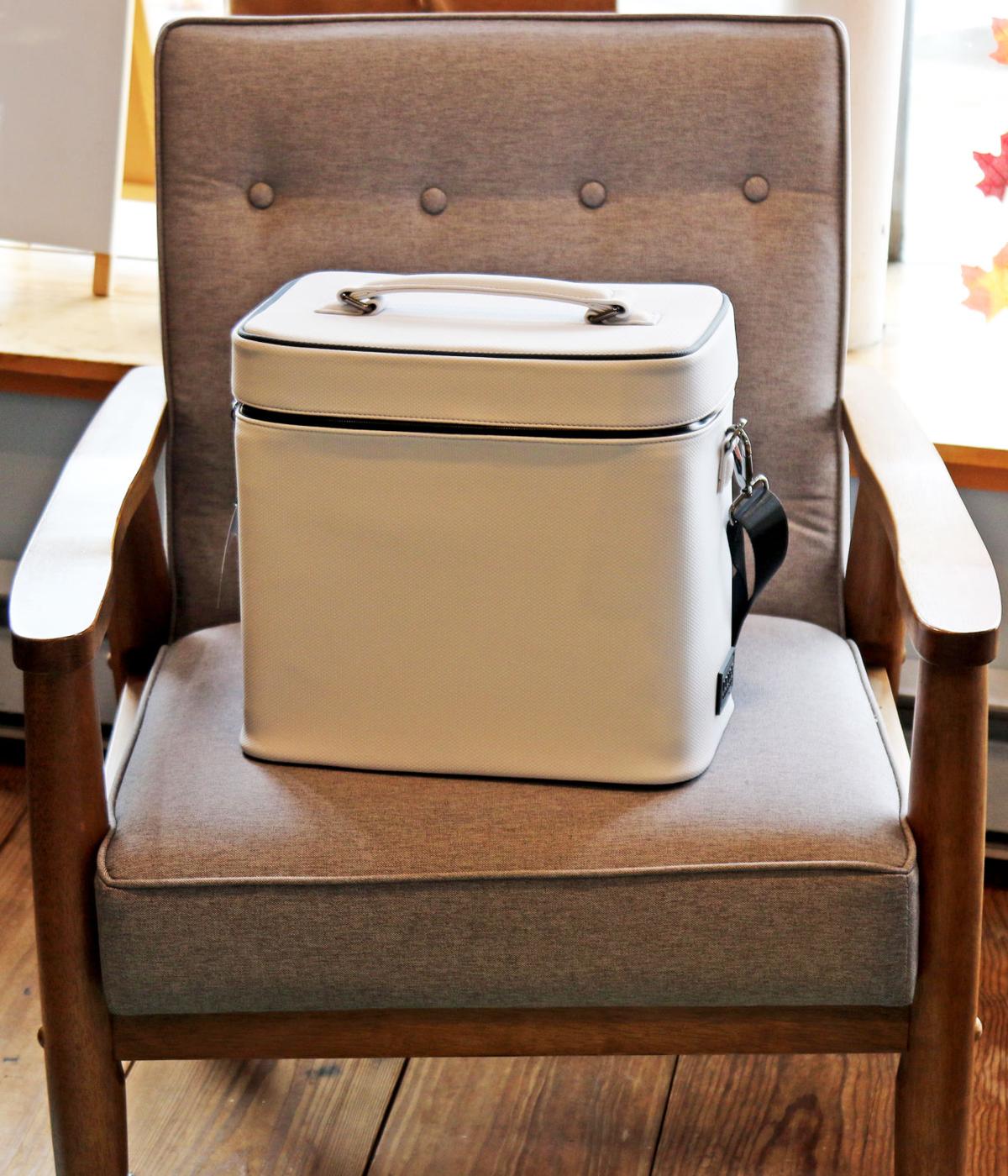 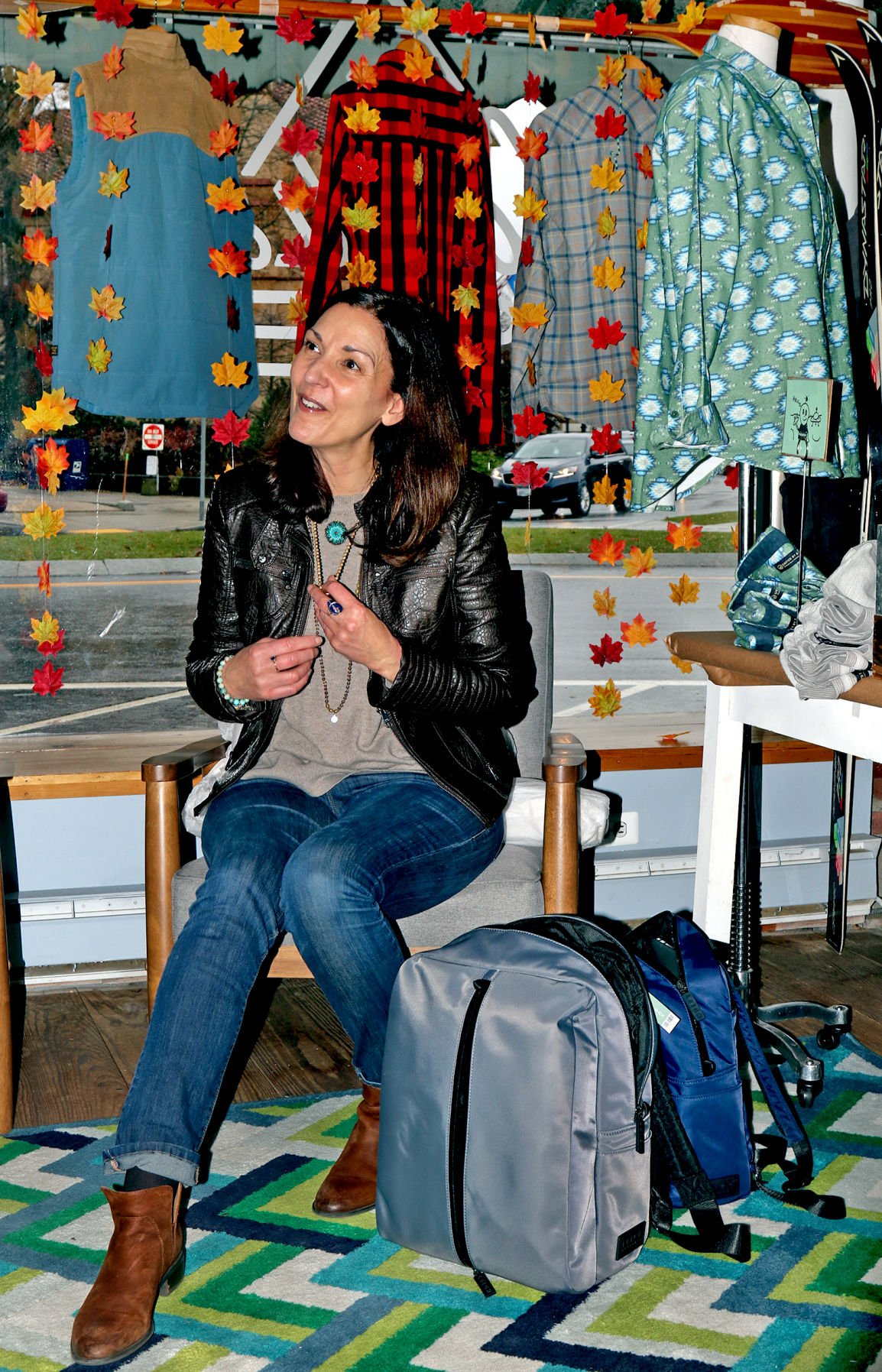 Tracey Cugno, founder of the LEIGH ShoeCase Company, discusses her footwear carrying cases during a visit to Cahill and Company on High Street in Westerly. Harold Hanka, The Westerly Sun

WESTERLY — Tracey Cugno of Westerly found a silver lining without a cloud.

Looking for sensible ways to pack shoes, Cugno, 53, learned that silver is the only natural, anti-microbial agent on the planet. It was a discovery that led her to design what she says is the first "sliding system" for shoes, and to form a business, the LEIGH ShoeCase Company.

The company, which has warehouses on Tom Harvey Road in Westerly, makes a sleekly designed collection of travel bags, duffels, cases and packs for the well-traveled person with an active lifestyle

Cugno, who likes to ski and travel — and loves shoes — came up with the idea while taking the tags off a new ski helmet. Cugno read a label closely and saw that the lining included silver. Its unique absorbent and anti-microbial properties would be, she thought, the perfect solution for shoe carriers.

Soon after, Cugno partnered with Noble Biomaterials to create custom linings woven with silver to stop shoe odor from being absorbed into the lining. The linings in Cugno's travel bags are stitched with silver yarn. Noble Biomaterials, of Scranton, Pa., licenses its silver-based technologies to the military, NASA, and manufacturers in the apparel and health care industries.

"These bags are the culmination of three years of research," said Cugno, explaining that silver helps eliminate troublesome odors that can emanate from well-worn shoes.

"It's the only travel brand that has a silver lining," said Cugno. "NASA uses the same for astronauts and the Olympics uses it in uniforms for the Olympic athletes."

"I feel lucky to be at this stage of my life, doing a new business and following my dream," Cugno said recently as she stood inside Cahill & Co., and apparel and accessory shop in downtown Westerly, where some models of her bags are for sale.

Anastasia Cahill of Pawcatuck, who owns the shop with her husband, Cameron, said Cugno's products are a natural for Cahill & Co., which aims to offer shoppers a "curated selection of goods and apparel that is responsibly made and all-around cool."

Cugno, a West Hartford native, is an entrepreneur and marketing professional who worked for years in radio sales in the Providence area. She has been the owner of Shades, a sunglass store in Narragansett, for roughly a decade, and until recently she also owned two sunglass kiosks — one at T.F. Greene Airport in Warwick and the another at Bradley International Airport, between Hartford and Springfield.

"I was a firsthand witness to the travel industry," said Cugno, who studied communications at Syracuse University, her alma mater. "I got to watch thousands ... no, I'd say millions of travelers ... walk by me."

Not only did she learn how to work and talk fast ... "You have to with travelers," Cugno chuckled ... but she had the opportunity to ask travelers questions about packing.

"The greatest challenge mentioned, by far, was packing shoes," she said. "People really wanted to know how best to pack shoes."

"That was the pain point," said Cugno, who once experimented with disposable wine totes to pack her own shoes safely and neatly. Cugno also learned that many travelers — women especially — wished they could pack more than a few pairs of shoes when they travel for business or vacation.

"What's the first thing you pack?" she asked. "Shoes. I know I do when I travel." But people tend to limit themselves, she said, because shoes can be tricky to pack. She thinks she's found a solution.

As Cugno's plan began to take shape, she came up with a prototype, took it to her kiosks and started asking more questions to the travelers walking by. She also asked friends and family members to weigh in on her products.

Her best friend, Gail Hulbert, the communications and marketing director at The Gamm Theatre, in Warwick,, said she was happy to give advice to the friend she describes as "warm, kind to the core, fun-loving and highly intelligent."

When she first listened to Cugno's idea, she was intrigued. A shoe lover and traveler herself, Hulbert urged her friend to "go for it!"

"Over the next couple of years, I was lucky enough to be a small part of the process," said Hulbert. "I can vouch for the usability, and extremely high quality of the LEIGH line."

"I have a navy blue ShoePak and I love it," Hulbert added. "It's the perfect thing for a long weekend."

But the true test came last fall when Hulbert went on a bike tour in Tuscany. "At the airport, I checked a suitcase and used my ShoePak as my only personal item on the plane," she said. "No carry-on, no purse. My ShoePak held everything I needed to navigate security, and a change of clothes in case my luggage got delayed."

Cugno said her family also played an important role in her company. "My mom came up with the name for the company," said Cugno, adding that the company is named in honor of her sister, the late Catherine D'Apice. "Her middle name was Leigh and she loved to travel," Cugno said.

Cugno said LEIGH ShoeCase will hold its first warehouse sale on Saturday, Dec. 7, from 9 a.m. to 3 p.m., at 89 Tom Harvey Road. It will feature samples, prototypes and seconds, at 50 to 70% off the retail value, and 30% off for some new items.

Cugno said she plans to donate the proceeds to the WARM Center, where she volunteers regularly and serves dinner on Sunday nights.

"It's important to give back to your community," she said.

Westerly council to set its sights on transfer station costs

Practicing Faith: When Praise was hurt, God paid the bill