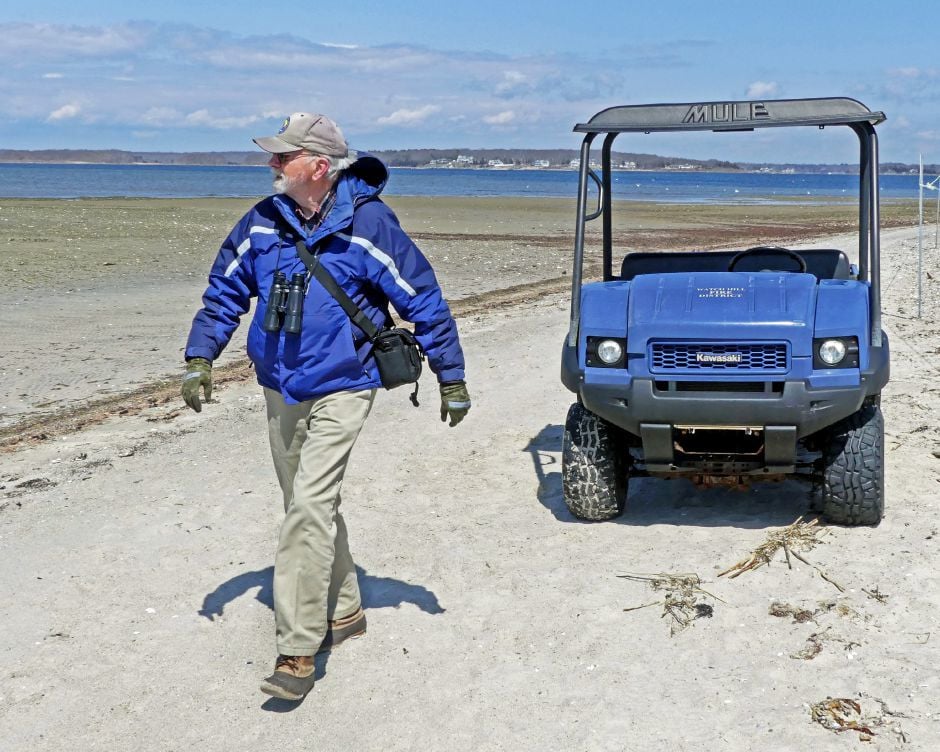 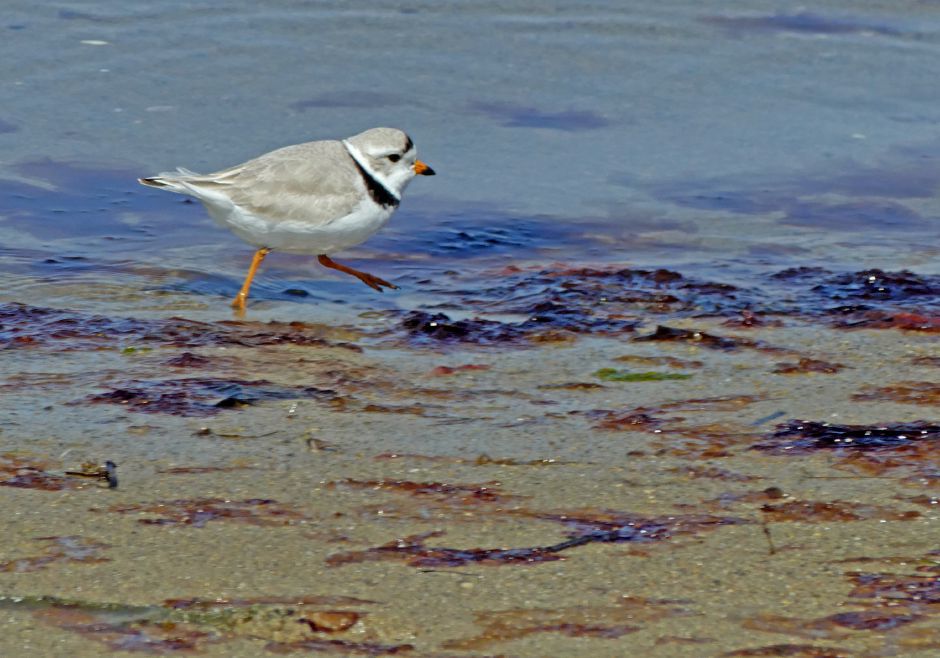 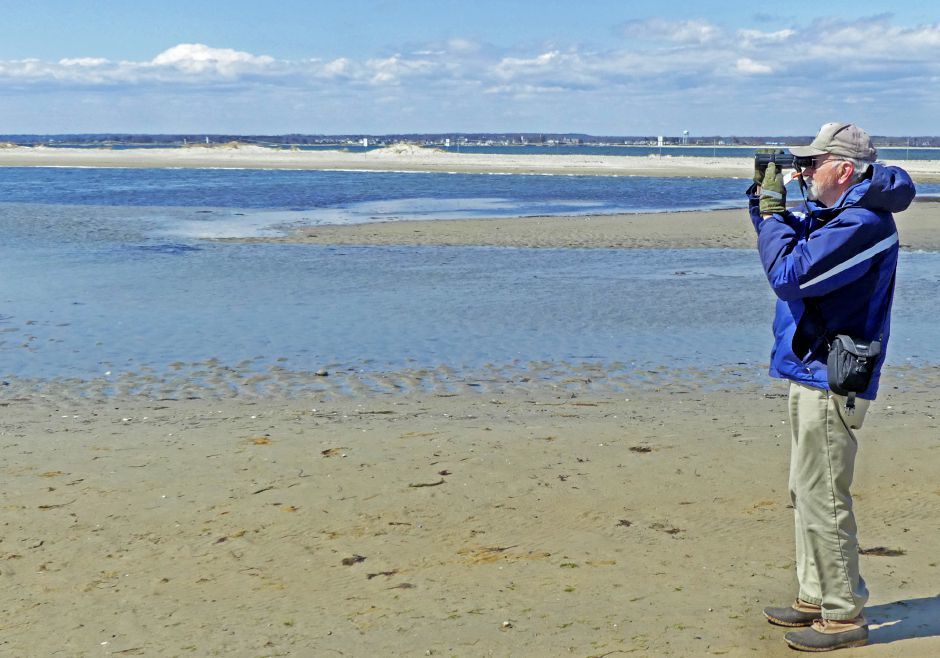 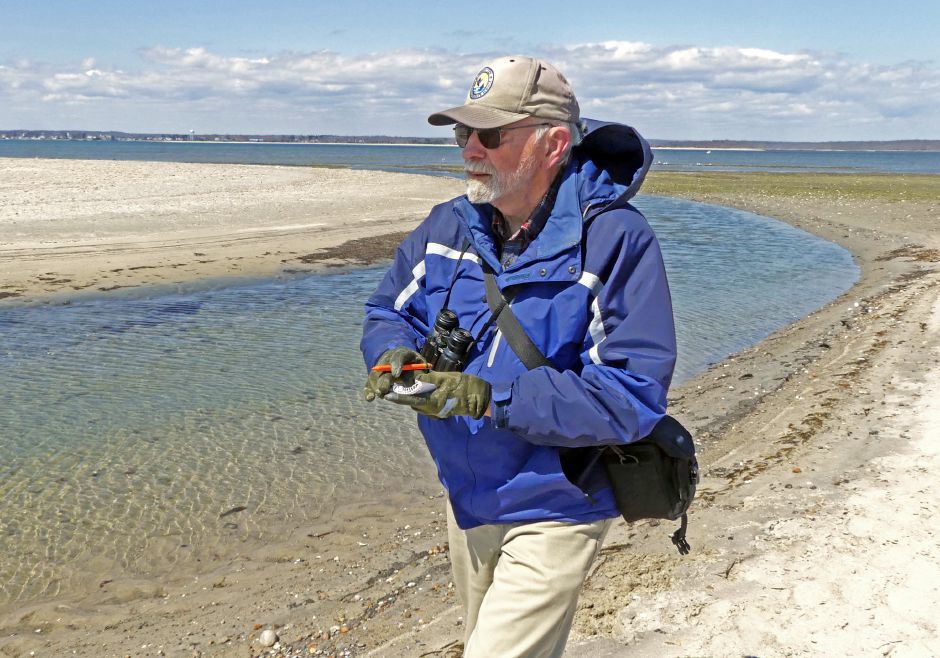 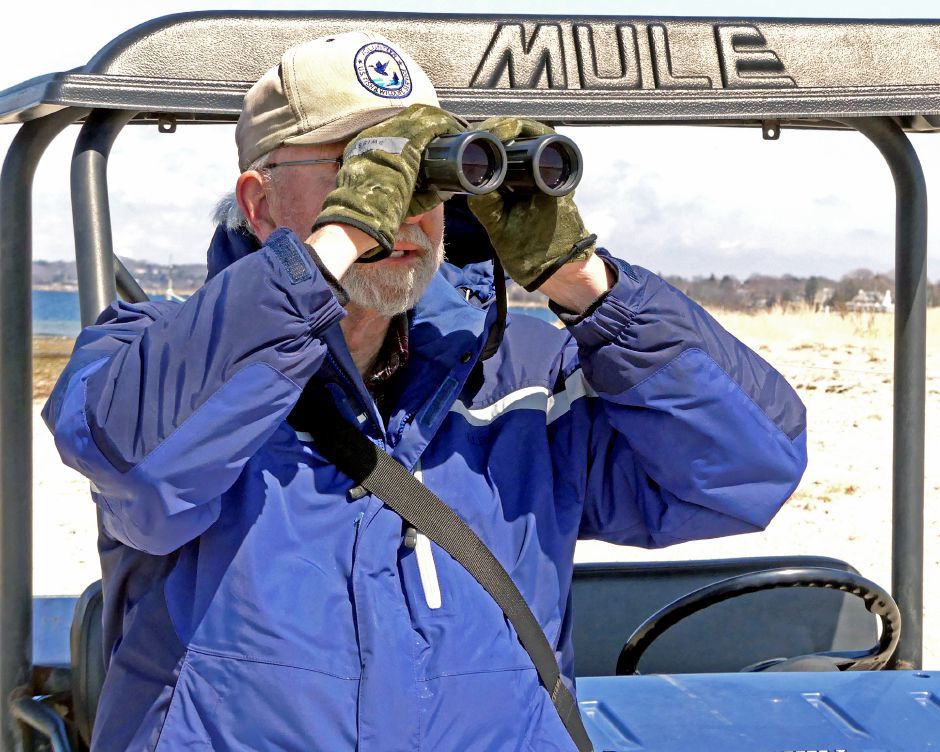 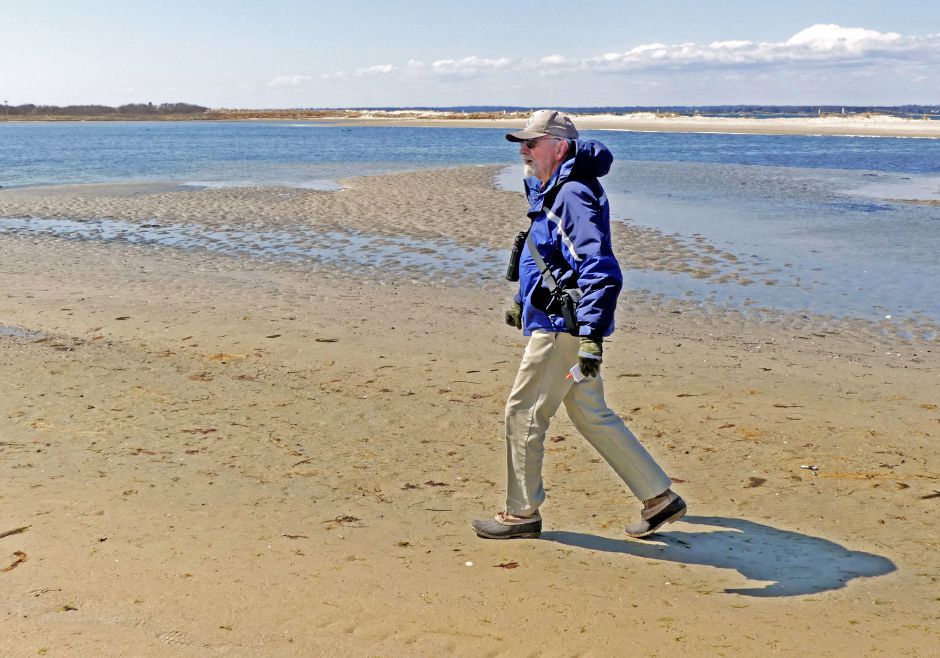 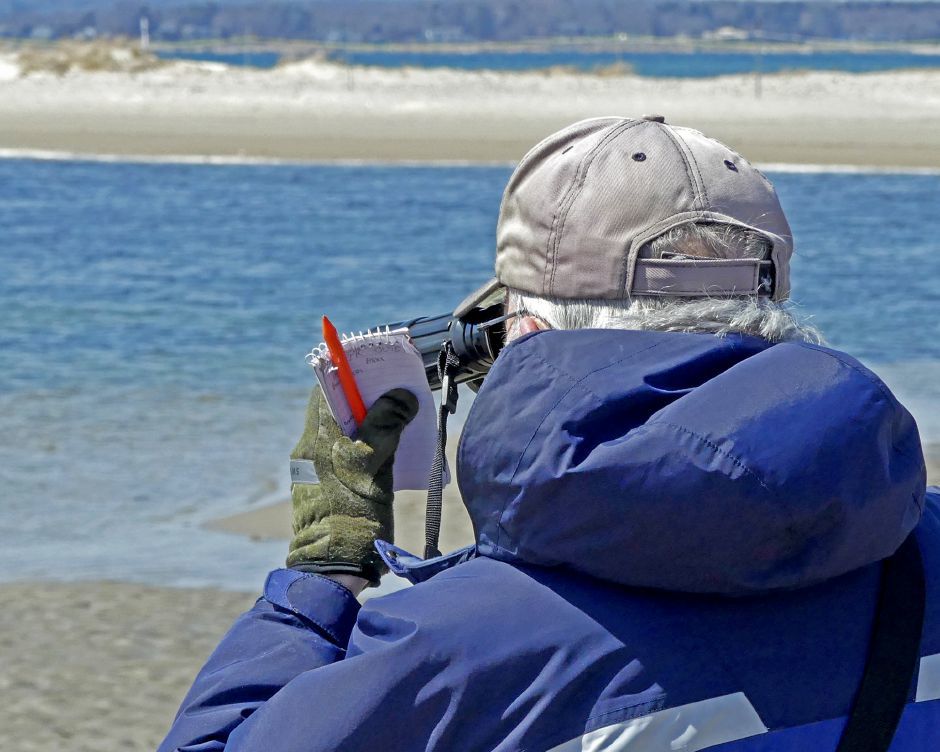 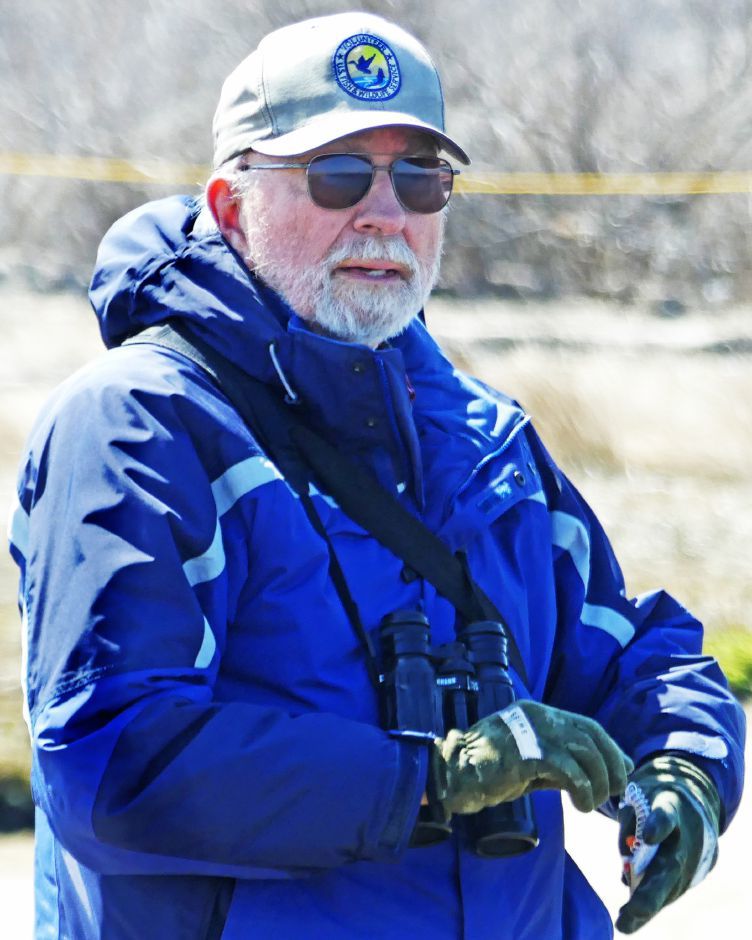 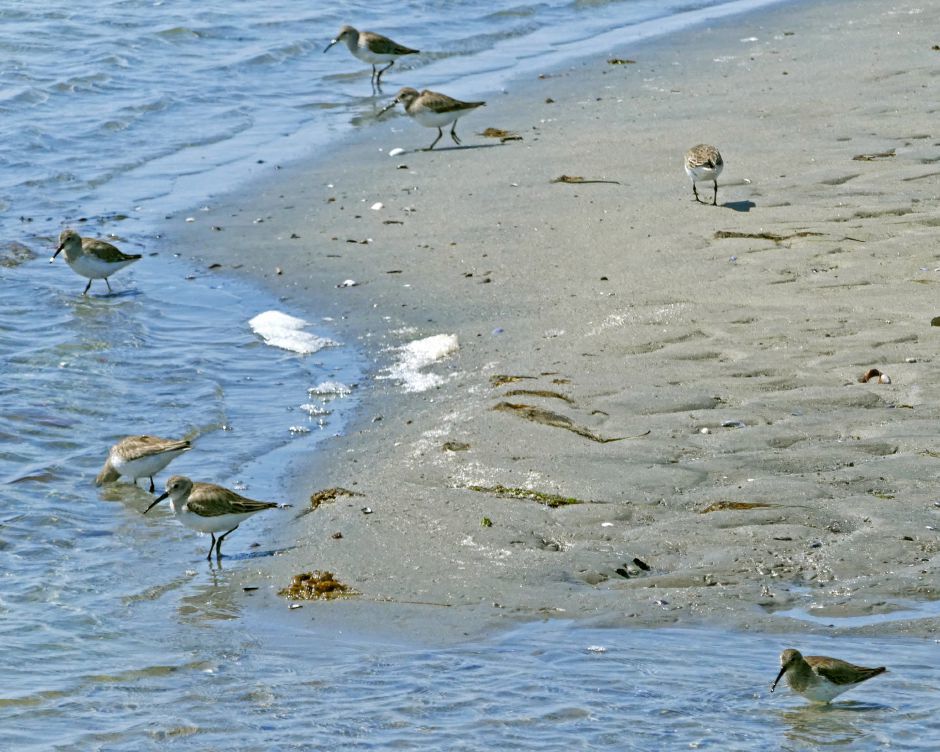 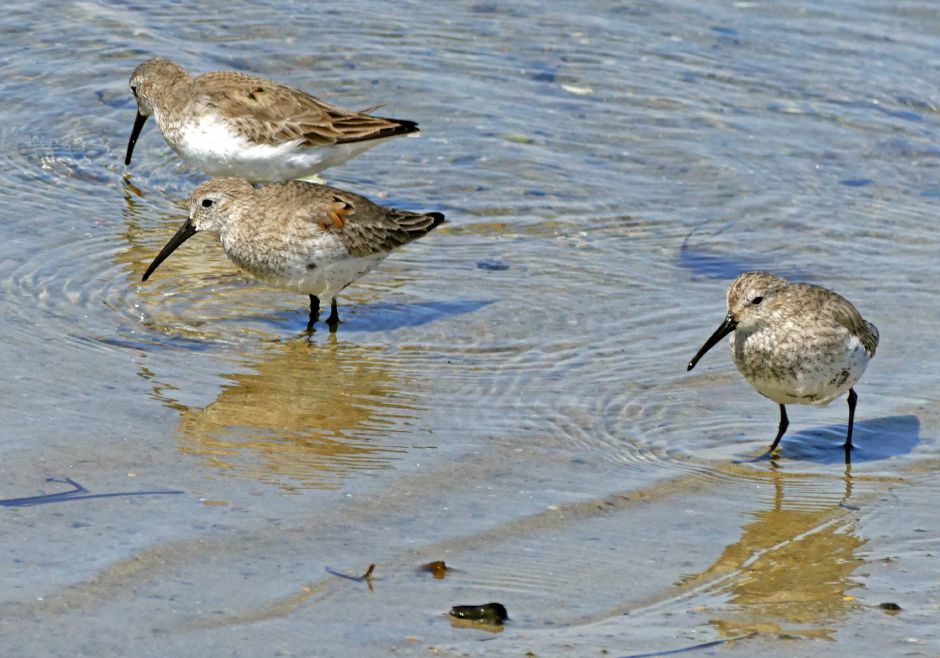 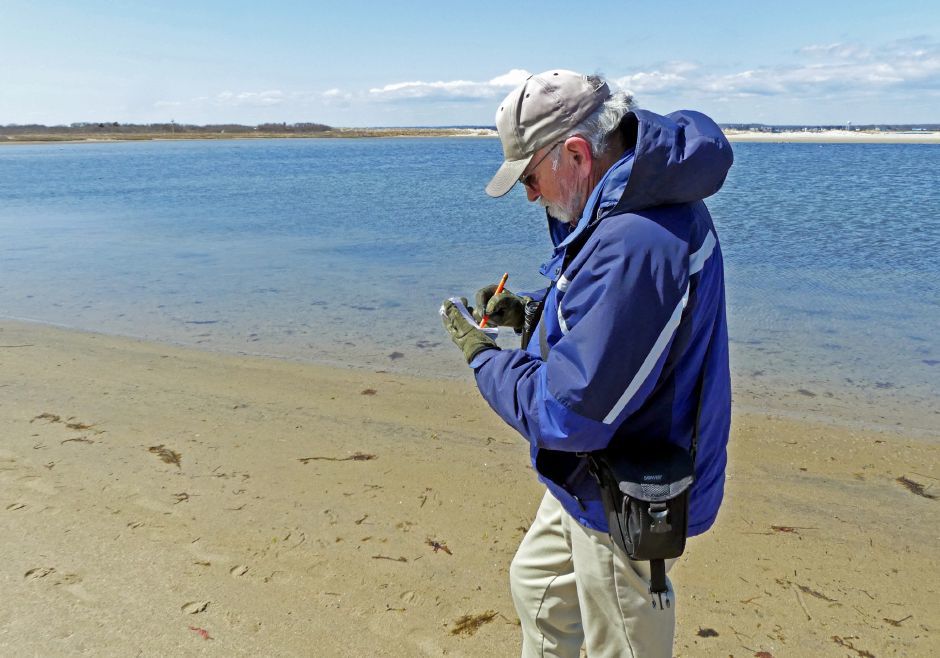 WESTERLY — Bundled up in parkas and hats against a cold spring wind, Rey Larsen and fellow birder Bob Weaver disembarked from the four-wheeler that had transported them for Larsen’s Napatree Point bird survey.

Napatree’s longest-serving volunteer, Larsen has been conducting bird surveys for a remarkable 55 years. He used to walk the entire conservation area, but now, in his 80s, he rides.

A tall man with the weathered face of someone who has spent many hours outdoors, Larsen, a retired physician, records the details of each survey with scientific precision.

“Today, we started at 1:20 and finished at 3:45, just over two hours,” he said, consulting a small notebook. “Shorebirds were the biggest highlight, along with the brant [geese], which came to well over 100 on the bay side and mostly on the outer point.”

“Rey surveys Napatree at least twice a month during low tide, which is the best opportunity to view foraging shore birds on the exposed mudflats,” she said. "He begins at the entrance to Napatree and records the date, time, participants and weather.”

Sassi and Larsen drive the entire Napatree perimeter and Larsen records species, their numbers and other information such as banding. Sassi said she has learned a lot about bird identification.

“He’s very patient with me and explains how to identify one species from similar- looking species,” she said. “He always shares interesting information on the natural history of the birds we see, such as unique behaviors and migratory patterns. For example, the brant that are so common on Napatree in the winter spend the summer months in the Arctic.”

“There were about a dozen little folders for separate species of birds that had information about their distribution, their nesting and so forth, and color plates of the birds,” he said. “So the next year, I went out and started looking around for myself and I found 17 different kids of birds when I was 9 years old.”

Larsen, a Navy submarine physician, began visiting Napatree when he was stationed in New London. A stint in Boston for internal medicine training kept him away from Napatree for two years, but when his training was complete, he returned to Rhode Island to work for three years at the naval hospital in Newport. He also worked for a time in Scotland before returning to the United States — and his favorite hobby.

Decades of careful observation have given Larsen a unique perspective on the fluctuations of Napatree’s bird populations.

“Certainly, there are more piping plovers, and the numbers of oystercatchers have increased greatly, especially the ones that we see here through the summer,” he said. “Even in June and July, which is not the time for migrants to be going through, we’ll see 30 or more. I think there’s more local nesting. There’s very little oystercatcher nesting on Napatree, but it’s great foraging country for them and I think  they come over here to feed.”

Asked if he remembers any special bird encounters during his hours at Napatree, Larsen says there have been “lots.”

“The snowy owls that we get here stand out,” he said. “The falcons, especially the peregrines and the shorebirds — the great number and variety of shorebirds. I think I’ve seen over 30 varieties of shorebirds at this one site.”

Larsen eschews fancy spotting scopes and carries a well-worn pair of Zeiss binoculars that he bought in 1994.

“Rey Larsen is a highly respected avian ecologist,” he said. “His surveys of Napatree have been a major contribution to the natural history of southwestern Rhode Island.  For the past few years he has been responsible for surveying the Napatree sampling blocks for the Rhode Island Breeding Bird Atlas project coordinated by URI and the Rhode Island Department of Environmental Management. This massive study describes what species breed where in Rhode Island.”

August noted that Larsen also posts his observations to the national eBird database, hosted by the Cornell University Laboratory of Ornithology.

“Rey’s long history of eBird postings has resulted in an amazing ornithological record for the Napatree Point Conservation Area,” he said. “It chronicles what species are on Napatree and how abundant they are. This database is freely available to researchers, environmental managers, and bird-watchers. Rey Larsen’s long-term surveys and eBird postings have created a data record that contributed to the designation of Napatree as a Globally Important Bird Area by the National Audubon Society. Rey helped put Napatree on the map as an avian biodiversity hot spot of global proportions.”

Larsen said he intended to conduct his surveys until rising sea levels, or physical limitations, made it impossible to continue.

“I’m afraid it’s going to get cut in two at some point and become inaccessible in terms of the best birding areas,” he said. “But that may not happen in my time. We just have to wait and see…I’m hoping to come twice a month or so until I’m no longer physically capable.”