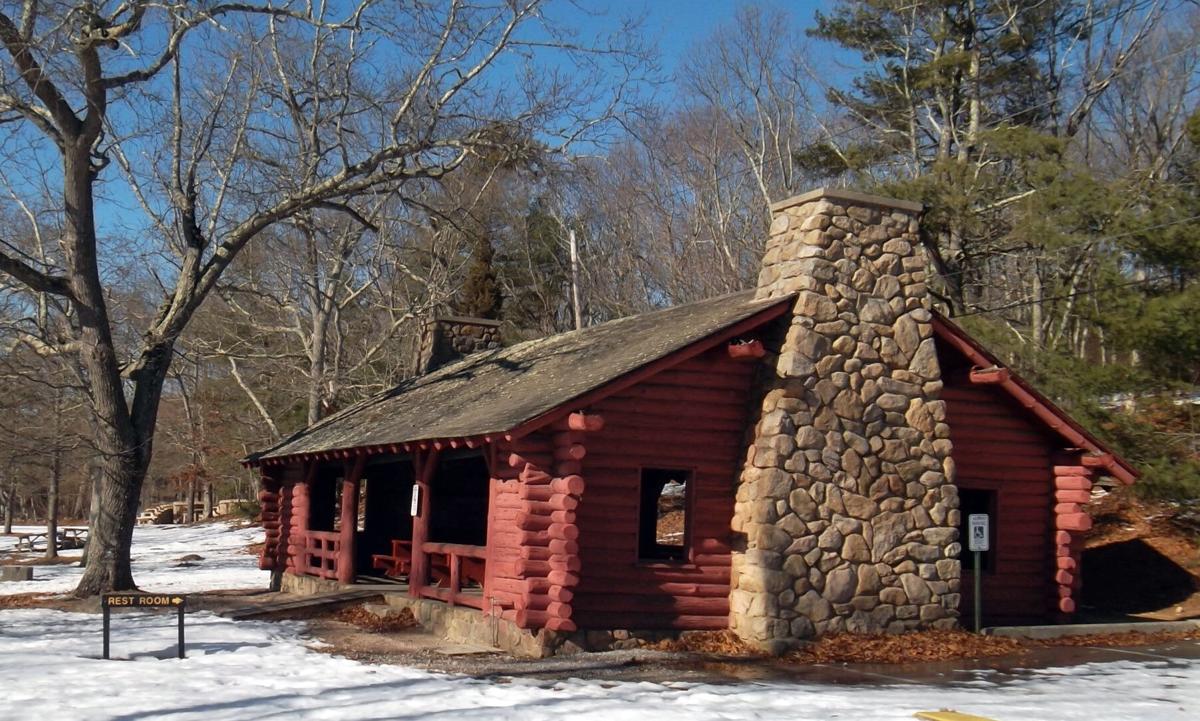 The log pavilion at Camp Westerly-Burlingame, built by Civilian Conservation Corps enrolees. The pavilion, near the beach on Watchaug Pond in Charlestown, still stands today. Photo courtesy of Martin Podskoch. 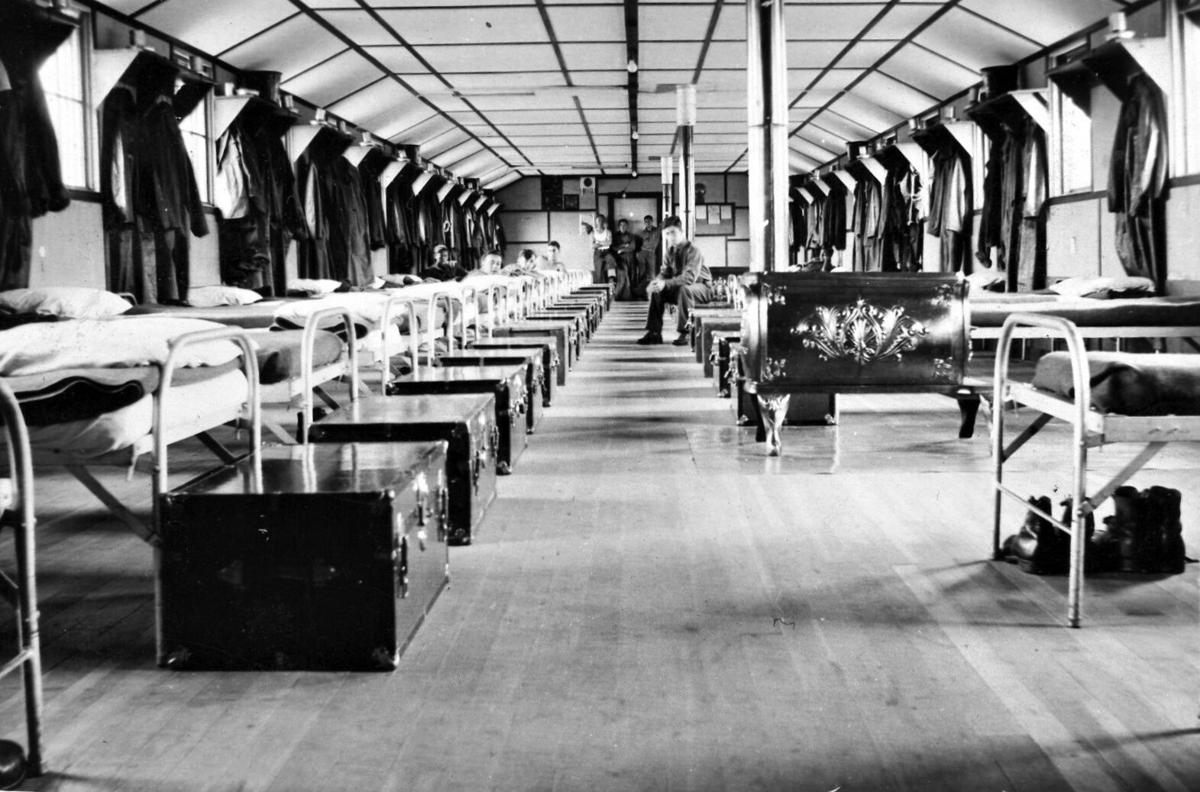 A group photo of Civilian Conservation Corps enrolees at Camp Westerly-Burlingame in Charlestown. Photo taken in 1934 by John MacDonald.

Boys at Camp Arcadia-Hope Valley going to work at the camp's truck garage. The photo, taken in 1937, is from the book "Rhode Island Civilian Corps Camps" by Martin Podskoch.

The log pavilion at Camp Westerly-Burlingame, built by Civilian Conservation Corps enrolees. The pavilion, near the beach on Watchaug Pond in Charlestown, still stands today. Photo courtesy of Martin Podskoch.

A group photo of Civilian Conservation Corps enrolees at Camp Westerly-Burlingame in Charlestown. Photo taken in 1934 by John MacDonald.

Boys at Camp Arcadia-Hope Valley going to work at the camp's truck garage. The photo, taken in 1937, is from the book "Rhode Island Civilian Corps Camps" by Martin Podskoch.

CHARLESTOWN — Most Rhode Islanders are probably unaware that many of the roads, trails and forests they take for granted are the work of the hundreds of young men who lived and worked at the state's Civilian Conservation Corps camps from 1933 to 1941.

In his new book, “Rhode Island Civilian Conservation Corps Camps: Their History, Memories and Legacy,” Connecticut historian Martin Podskoch focuses on the seven Rhode Island camps, including those in southwestern part of the state.

The 168-page book contains numerous photographs depicting life at the camps, which were started during the Great Depression by President Franklin D. Roosevelt. Created in 1933 when Congress passed the Emergency Conservation Work Act, the CCC camps operated across the United States for only eight years. But over that period, they employed nine million young men who learned important life skills and useful trades while doing valuable conservation work.

Podskoch met some of the Rhode Islanders who provided information for the book when he presented talks on the CCC to historical societies in Westerly, Charlestown and Hopkinton. Nevertheless, it was hard going even finding children of CCC alumni (known as "boys") so many decades later.

“I was only able to find two living CCC boys,” he said. “They’re probably other boys, and once the book comes out, I’ll get more information.”

This is Podskoch’s 10th book, and his third book on the CCC. The first two CCC books focused on camps in Connecticut and the Adirondacks.

“I’m three books down and I’ve interviewed, probably, 200 to 250 alive CCC boys and got their stories, so you’ve just got to keep going,” he said.

In Rhode Island, new CCC recruits were first sent to Fort Adams and then dispatched to seven camps, all of which were run with military precision by the U.S. Army.

To qualify for a CCC camp, a young man had to be between the ages of 18 and 25, healthy, unemployed, on social assistance, and not attending school.

The recruits signed on for six months at a time and were paid $1 a day. The young man’s parents received a direct payment of $25 from the federal government each month and the enrollee received $5. The money made a huge difference to families during the Depression years.

“Sometimes, there might have even been two boys from one family who were working in the CCC, so they were getting $50 a month, and it built a responsibility, a sense of worth in the boys,” Podskoch said. “Another big thing the boys told me, they learned to get along with everybody. When you were in a camp, you get everything.

"In this case, they were the poor boys. Some of them didn’t know how to read or write. A lot of bad habits. So they learned how to get along, they learned to take orders, and the big thing is, they were helping their family.”

Each camp could accommodate up to 200 enrollees, but the numbers declined as the Depression eased.

The three CCC camps in southwestern Rhode Island were Westerly/Burlingame in Charlestown, Hope Valley/Arcadia in Richmond and Escoheag/Beach Pond in Exeter. The remaining camps were located in West Greenwich, Foster, Gloucester and North Smithfield.

Daily life was structured, with boys working on projects ranging from building roads and blazing hiking trails to battling the gypsy moth and planting trees.

“The Burlingame camp, the big one there was the building of the state park,” Podskoch said. “They built trails there, that log structure [the pavilion] is still there.”

In the winter, CCC boys would go into the forests in search of gypsy moth eggs.

“The boys would be climbing trees and looking for the egg masses, and they would paint them with creosote to kill them,” Podskoch said. “They would cover so many acres of land, even on private land, trying to stop it, but they were never able to completely do it.”

They also helped with the recovery effort after the disastrous 1938 hurricane.

“I met two men whose fathers were in that recovery, searching for dead bodies,” Podskoch said. “I think 20-some bodies were found along the shoreline.”

The hurricane was also a source of wood, which the boys salvaged.

“They spent over a year just salvaging all these trees that had been knocked down and were able to cut them up and sell them for lumber,” Podskoch said.

By the time the United States entered World War II, after the bombing of Pearl Harbor in 1941, all the camps were closed. But the discipline and Army training had prepared the young men to serve in the armed forces.

“Hitler hated the CCC, because from ’33 to ’42, the Army was training the boys,” Podskoch said. “They had discipline. They had leaders that took care of the camps …. They had leadership qualities. When they went into the Army, all of a sudden they became sergeants because the Army knew that they were leaders.”

The book will be available in stores and online on Dec. 15. It can also be ordered directly from the author.

Podskosh is researching two additional books on the CCC camps in Vermont and Massachusetts and is interested in speaking with anyone who might have CCC stories or photographs to contribute to those books. He can be reached at 860-267-2442 or at podskoch@comcast.net.