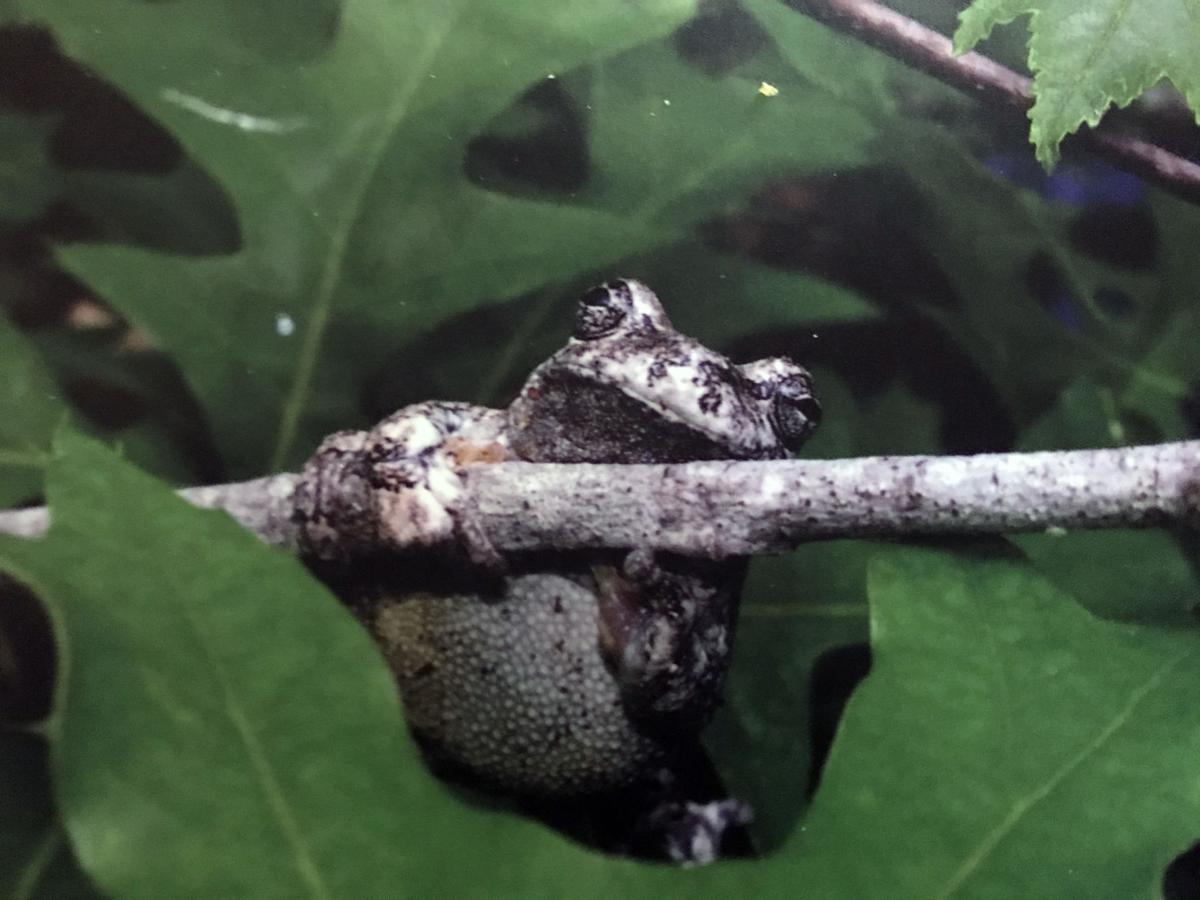 The Rhode Island Department of Environmental Management’s Division of Fish and Wildlife has published a new book entitled “Amphibians of Rhode Island.” Written by retired DEM biologist Christopher Raithel, the book is a comprehensive reference on Rhode Island’s 18 species of toads, salamanders and frogs. Cynthia Drummond, The Westerly Sun 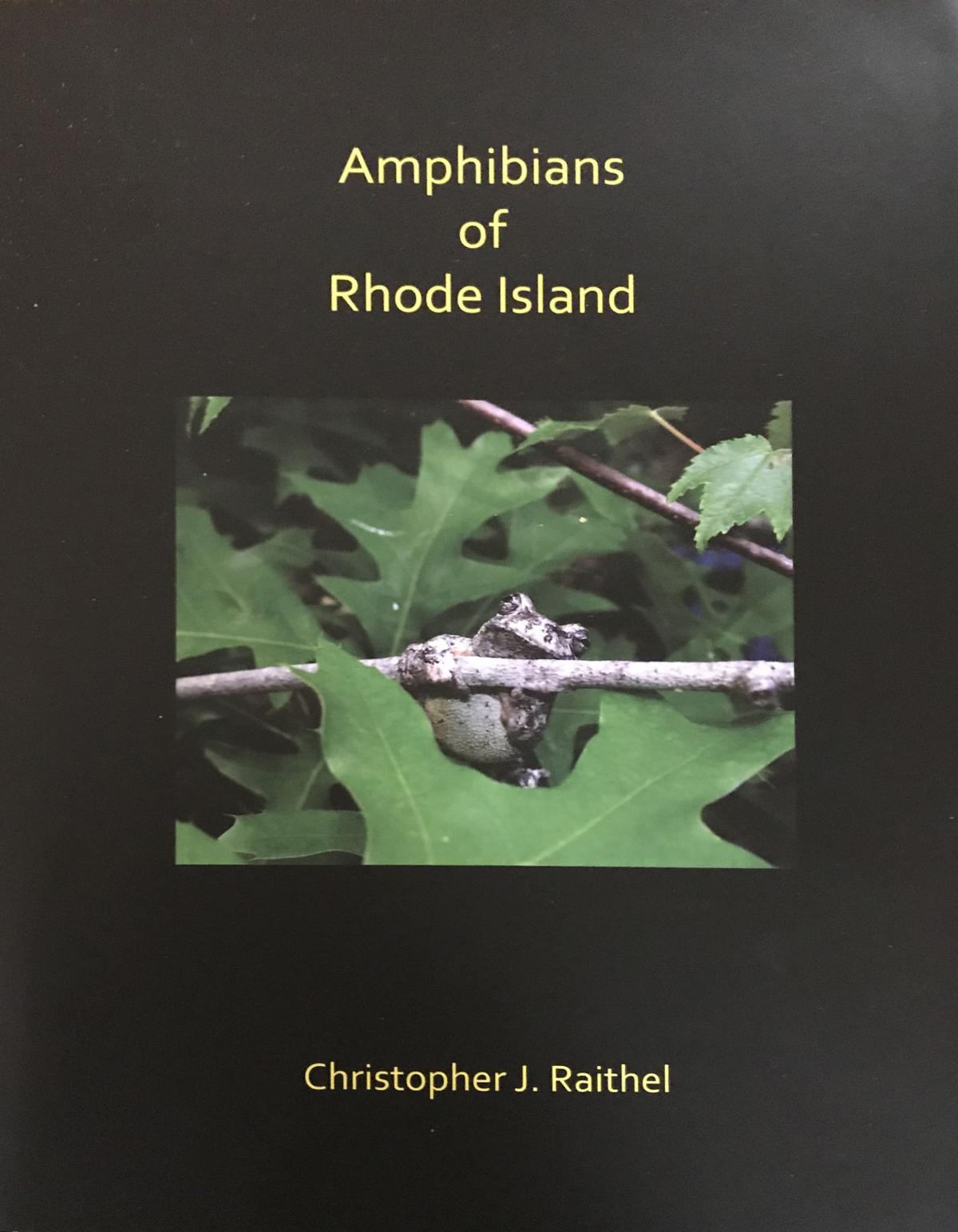 A gray tree frog graces the cover of a new guide to Rhode Island’s frogs, toads and salamanders. The photo was taken by Hayden Raithel, the son of the book’s author, retired RIDEM biologist, Christopher Raithel. Cynthia Drummond, The Westerly Sun

The Rhode Island Department of Environmental Management’s Division of Fish and Wildlife has published a new book entitled “Amphibians of Rhode Island.” Written by retired DEM biologist Christopher Raithel, the book is a comprehensive reference on Rhode Island’s 18 species of toads, salamanders and frogs. Cynthia Drummond, The Westerly Sun

A gray tree frog graces the cover of a new guide to Rhode Island’s frogs, toads and salamanders. The photo was taken by Hayden Raithel, the son of the book’s author, retired RIDEM biologist, Christopher Raithel. Cynthia Drummond, The Westerly Sun

A new hardcover guide to amphibians describes the physical characteristics, life stages and habitats of the 18 species of frogs, toads and salamanders living in Rhode Island.

Raithel spent 40 years working as a biologist for the DEM before retiring in 2018. His richly-illustrated 316-page book provides detailed information on each species, including its historic distributions, life stages, conservation status and proposed conservation strategies.  Raithel said he had been interested in amphibians for most of his life.

“I was always interested in them, even when I was a kid, but I never had an opportunity to do anything professionally until I began to work for the state,” he said.

A graduate of the University of Rhode Island, Raithel earned a Bachelor of Science degree in Zoology in 1976 and a Master’s degree in Natural Resources Science in 2008.

Peter August, professor emeritus at the URI’s Department of Natural Resources Science and member of the Watch Hill Conservancy Board of Directors, said Raithel’s book was destined to become the standard reference on Rhode Island’s amphibians.

“Chris Raithel’s treatise on the amphibians of Rhode Island is a must-have addition to the libraries of every naturalist in the region,” he said. “It is based on decades of careful observation and note-taking by one our most skilled field ecologists. The author’s passion for frogs, toads, and salamanders shines through in this beautifully illustrated and clearly written book.”

Born in Westerly and currently living in Hope Valley, Raithel has spent countless hours turning over logs and counting amphibians crossing roads on rainy nights, an activity he calls “road-running.” Unfortunately, roads, and other human activities, are jeopardizing the survival of many species.

“These animals are like a lot of wildlife forms,” he said. “They need a fairly large area to move around in and they just need to be left alone. Basically the problem with amphibians, more or less, has to do with human activity and human infrastructure; roads … not exclusively but primarily, that’s what gets them.”

Paton agrees with Raithel on the reasons for the amphibians’ decline.

"Amphibians are sensitive to habitat fragmentation and urbanization,” he said. “ In particular, pool-breeding amphibians that breed in seasonally-flooded wetlands and disperse several hundred meters into adjacent uplands are affected by habitat development."

"Over Chris's lifetime, he has documented the decline of several species, as road mortality can have devastating impacts on their populations. Thus, amphibians represent the canary in the coal mine for the detrimental impacts of urbanization. Unfortunately, due the high density of roads in our state, we are becoming Road Island, which, as Chris knows better than anyone, is not a good outlook for the amphibians of our small state.”

While the book contains the inevitable sobering message warning of the decline of Rhode Island's amphibians, Raithel hopes it will also have a positive impact on local conservation efforts.

“I do think that there is something I can do locally and hopefully, you start with a ripple in a pond and spread it out,” he said. “Maybe some of the things that I’ve said in this book could have an impact throughout the northeast in terms of designing conservation plans that are actually effective. If that’s the extent of the influence, that’d be great.”

Amphibians of Rhode Island can be purchased for $20 at the DEM Office of Boat Registration and Licensing in Providence by cash, check, money order, or for an additional fee, credit card. All proceeds from book sales will go towards wildlife conservation at the Rhode Island Division of Fish and Wildlife.

The book is also available, by check or money order only, at the Division of Fish and Wildlife Field Headquarters in West Kingston, or by mail using the order form at: http://www.dem.ri.gov/bookorder.