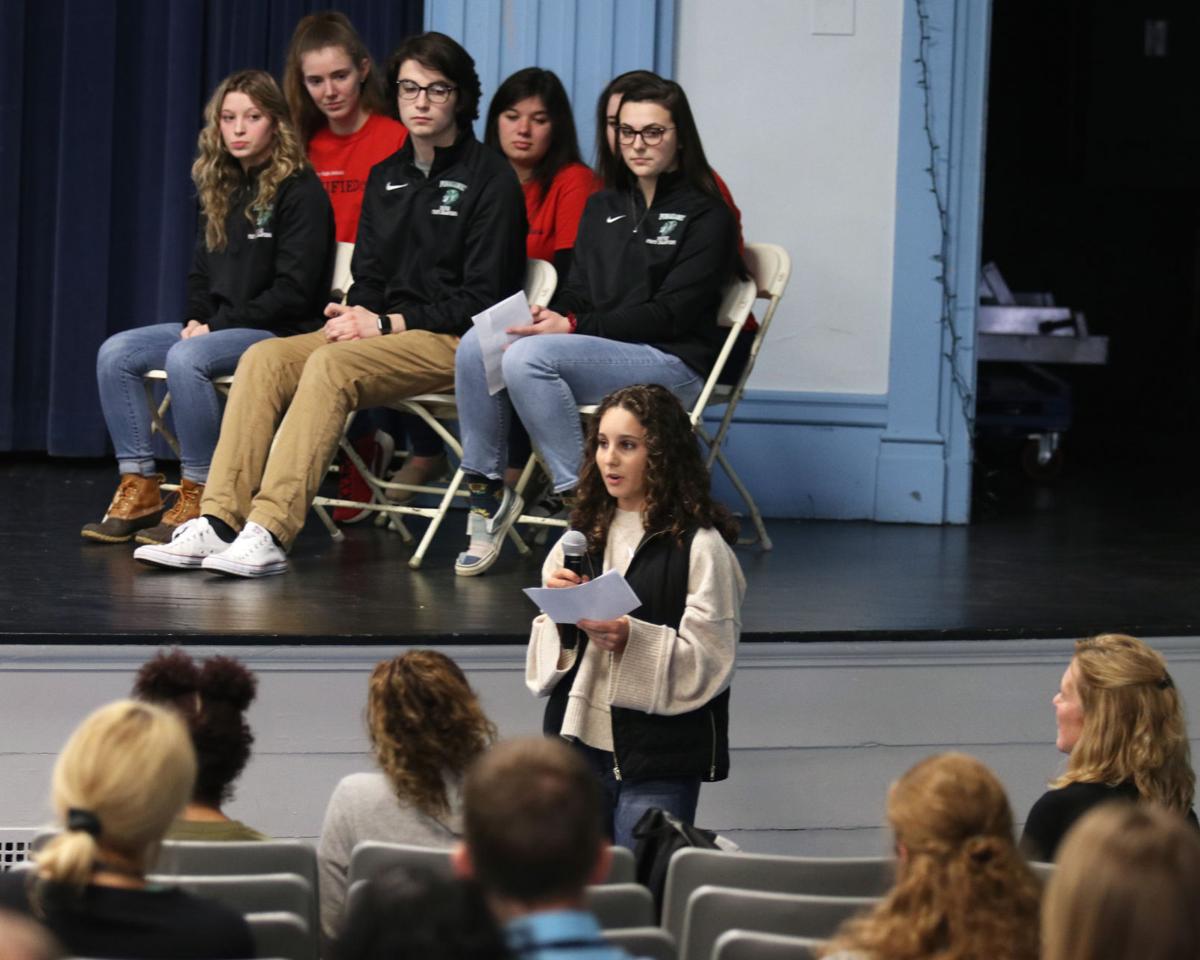 Abby Turano, president of the WHS School Culture Committee, addresses an assembly on Thursday.  Westerly High invited students from Ponaganset High School give a presentation on its inclusiveness program.  Ponaganset has been recognized as a Special Olympics National Unified Champion. Harold Hanka, The Westerly Sun 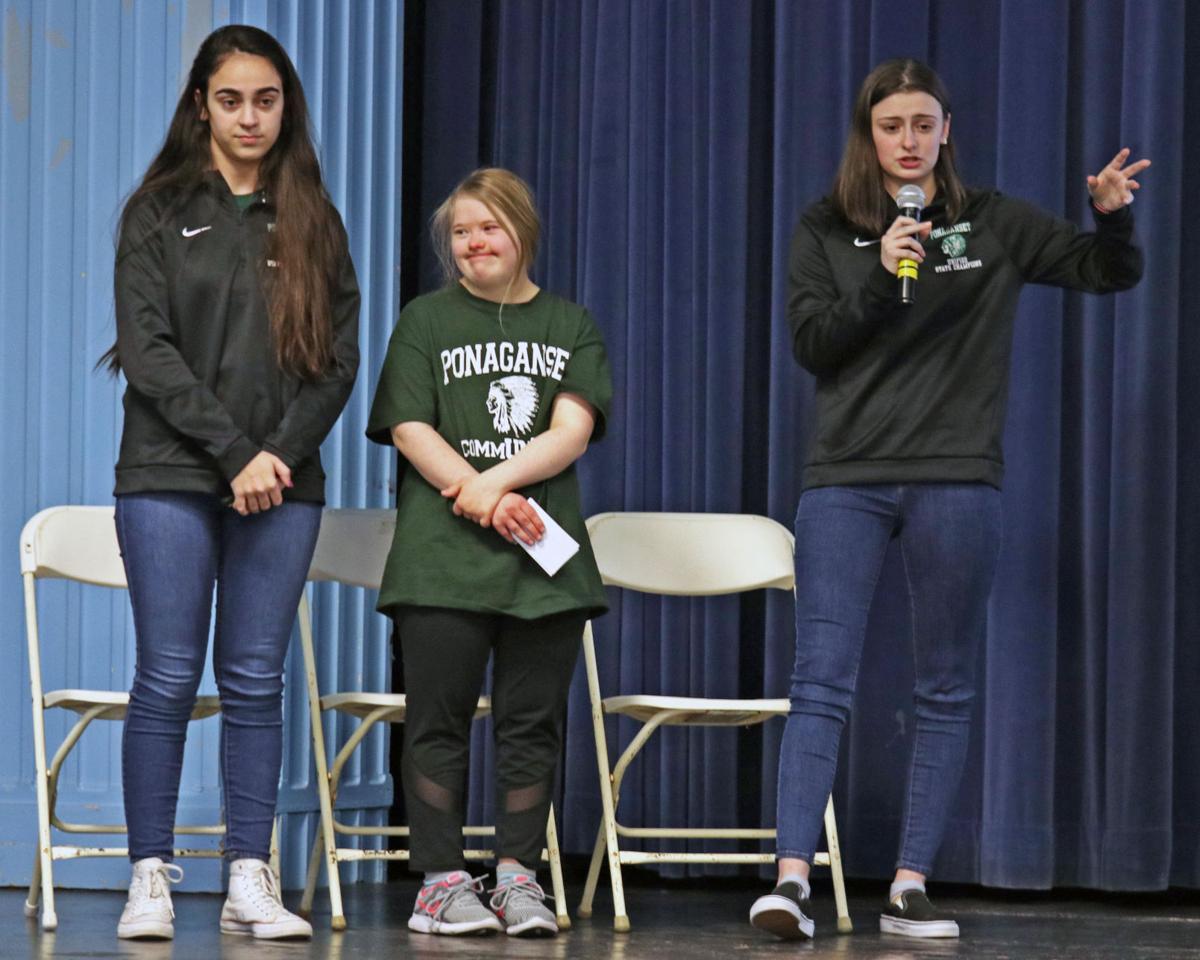 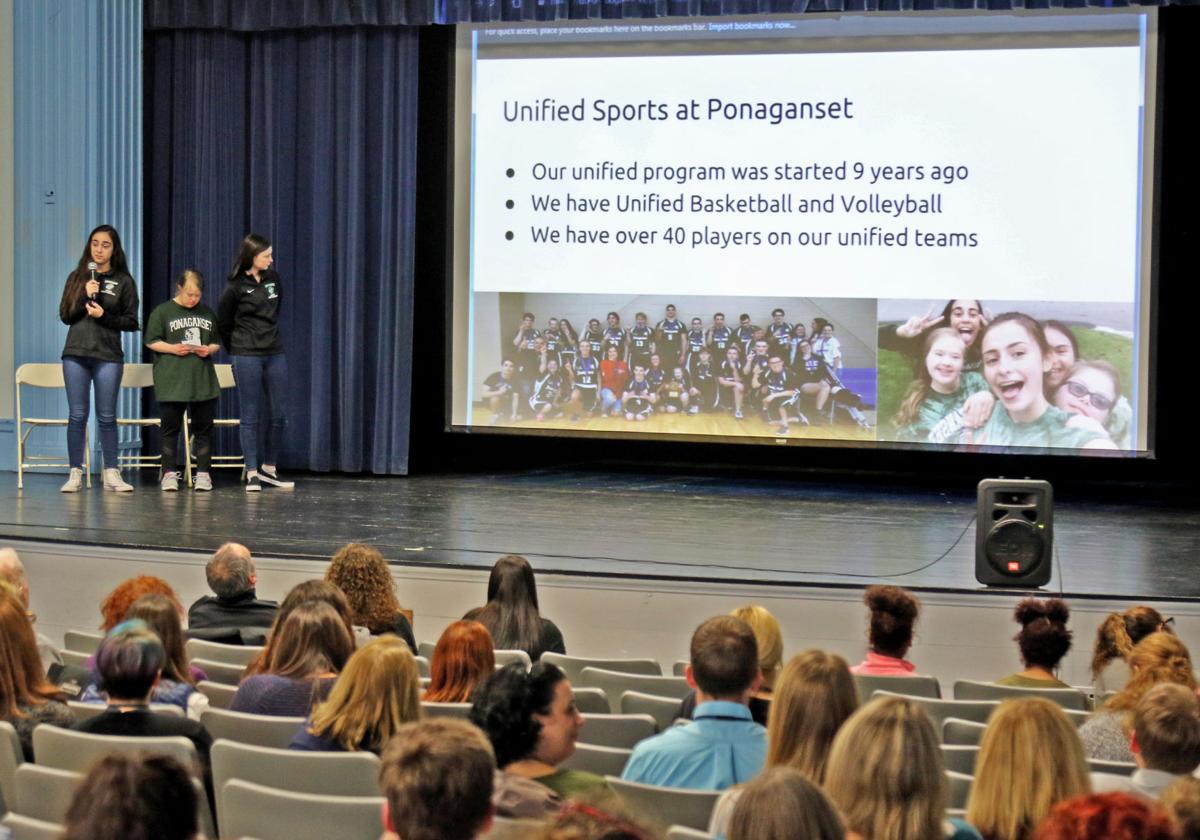 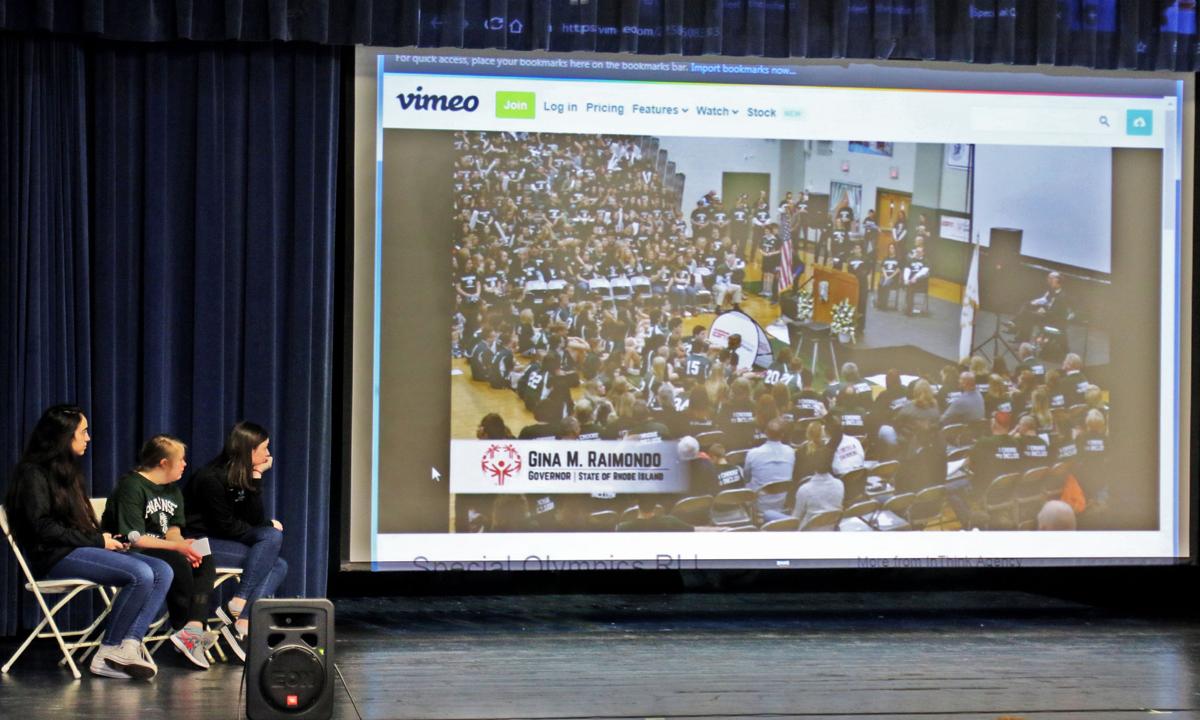 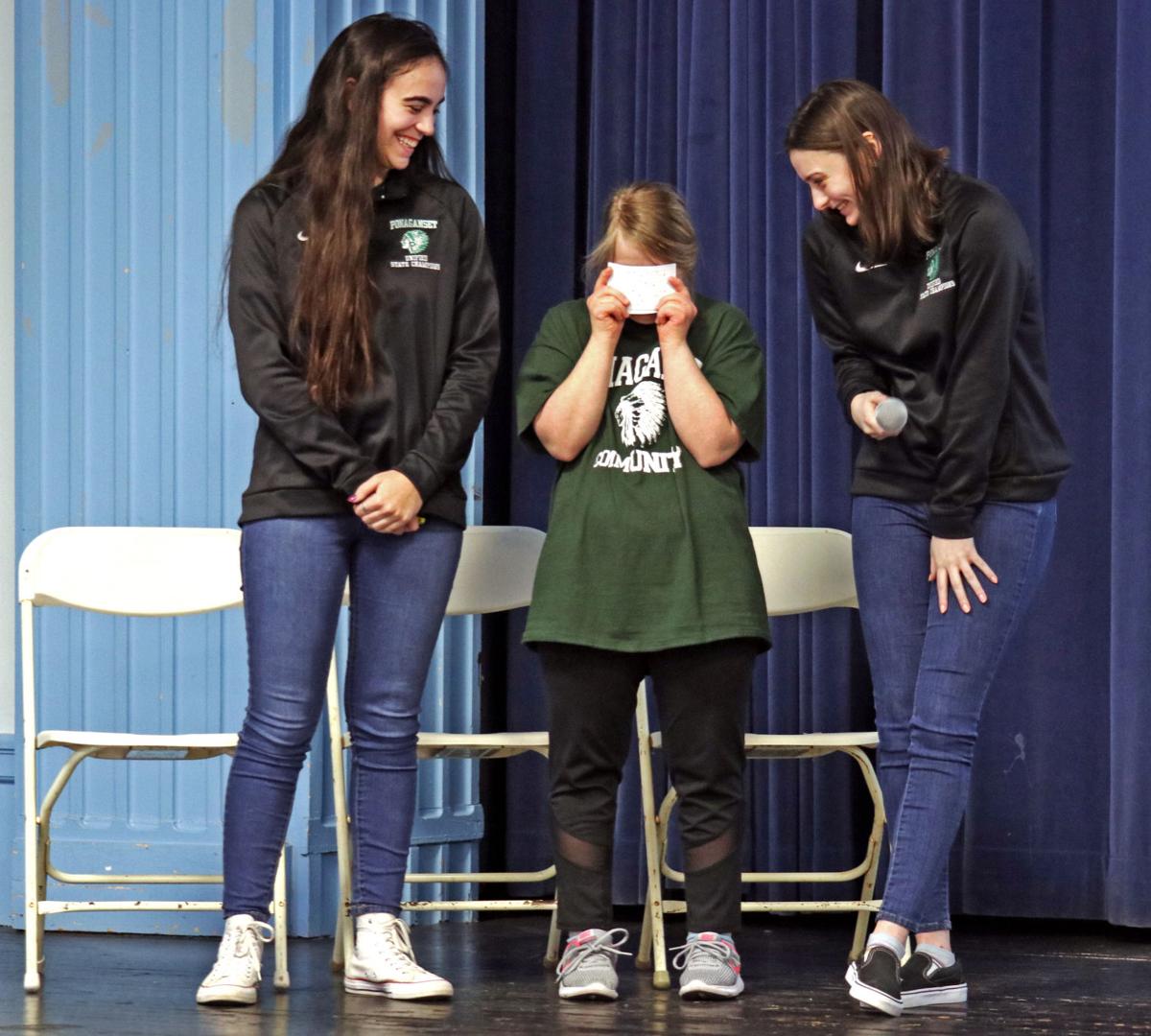 Abby Turano, president of the WHS School Culture Committee, addresses an assembly on Thursday.  Westerly High invited students from Ponaganset High School give a presentation on its inclusiveness program.  Ponaganset has been recognized as a Special Olympics National Unified Champion. Harold Hanka, The Westerly Sun

WESTERLY — Westerly Police Chief Shawn Lacey linked arms with Westerly High School teachers Thursday afternoon and recited — along with an auditorium full of students, teachers, and visitors from Ponaganset High School and other schools — the "Choose to Include" pledge.

"I pledge to look for the lonely, the isolated, the left out, the challenged, and the bullied," they said in unison. "I pledge to overcome the fear of difference and replace it with the power of inclusion."

Lacey was among dozens of invited guests at the assembly, which was organized by Westerly High School social workers Terry Castagna and Erin Pringer; Michele Azzinaro, who chairs the special education department; and WHS junior Abby Turano, president of the school's Culture Committee. It was held to introduce the faculty and key members of the community to an idea that the organizers hope the entire town will embrace: the power of inclusion.

After hearing about the success of the "Choose to Include" program at Ponaganset High School in North Scituate, Castagna and her team invited students and faculty members to share their experiences, explain the origin of the program, and describe what makes it so successful.

In 2017, Ponaganset High School received a Special Olympics National Unified Champion School banner for meeting standards in unified sports, youth leadership, and whole school engagement. The school was honored for "including students of any ability in any and all sports and activities." Special Olympics Chairman Timothy Shriver, whose mother, Eunice Kennedy Shriver, was the founder of Special Olympics, presented the award at a pep rally hosted by ESPN and attended by ESPN anchor Kevin Negandhi and Gov. Gina Raimondo.

The pledge originated then, Castagna said, and has been instrumental in improving the culture at the school and in the community. She said that Ponaganset students and teachers inspired their entire community to "unite under one pledge on an inclusive culture."

In the first half of the program, Ponaganset students Capri Martinelli, Kate DeCotis and Jenna Obuirka told stories of inclusion, showed videos and spoke about the power of the Unified Sports program in their school. "It opened doors we didn't even know were closed," said Martinelli.

The students passed the microphone back and forth, with Martinelli and Obuirka pausing to encourage DeCotis, who has Down syndrome, each time it was her turn to speak.

In the second half of the program, seniors Ethan Fraatz and Grace Wells-Dannenfelser and junior Maggie Nardelli spoke about the first day of Ponaganset's "Choose to Include" assembly in September, when students welcomed new students and faculty and linked arms to take the pledge together.

Wells-Dannenfelser said the pledge has had a "powerful impact." Last fall, she said, members of the football team used to take breaks from practice to watch some of the Unified volleyball games and cheer the players on.

Gary Martinelli, a history teacher at Ponaganset, applauded the gains that have been made in the special education field.

"Some of us can remember the days when special education programs were held in closets," he said. "Inclusion allows students to broaden themselves ... but it's the students who run the show ... they're the ones who go out into the community."

Beth Keeling, a member of the Foster-Glocester Regional School Committee, attended the assembly. She said that the more the word gets out about the program, the more school districts around the state will join the cause.

"There's a lot of division in the world out there right now ... but these kids," Keeling said, "these kids will change the world ... they are building a world of inclusion."

"Please join us," Keeling urged. "Next Chariho will hear about it and then the whole state."

Azzinaro said, "We want this to go out beyond the walls of the school. We want to have a 'Choose to Include Rhode Island'."

Castagna said she hopes everyone in town will be inspired to take the pledge.

"I hope all Westerly residents will start to think of how we can personally incorporate #choosetoinclude in our homes and workplace," she said.

Turano said she felt inspired by the presentation, and was eager to get started on the program in Westerly.

When she asked the Ponaganset contingent for some pointers on getting started, Keeling said Westerly has already begun.

Band Room gears up for its first virtual recital