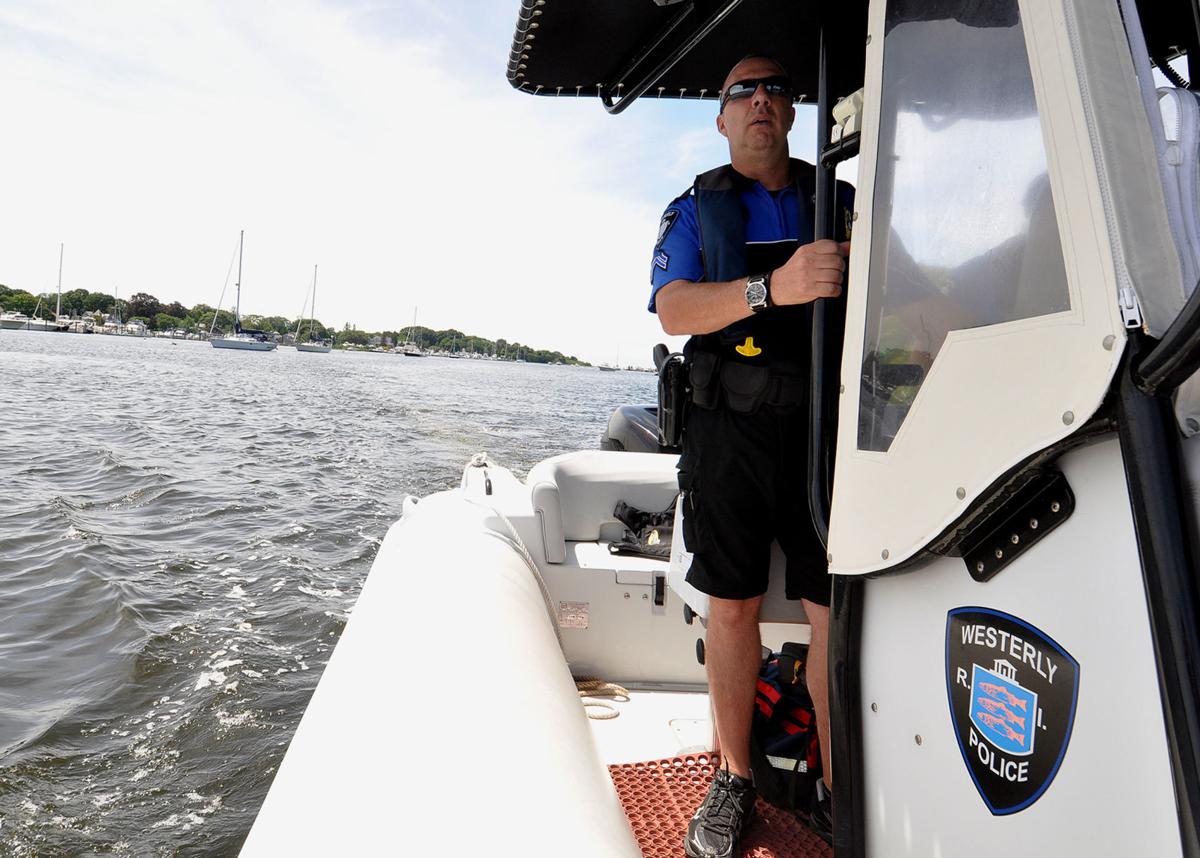 Wayne Crockford of the Westerly police, then a corporal, was patrolling the Pawcatuck River in this 2012 photo. He has since been promoted to lieutenant. Sun file photo 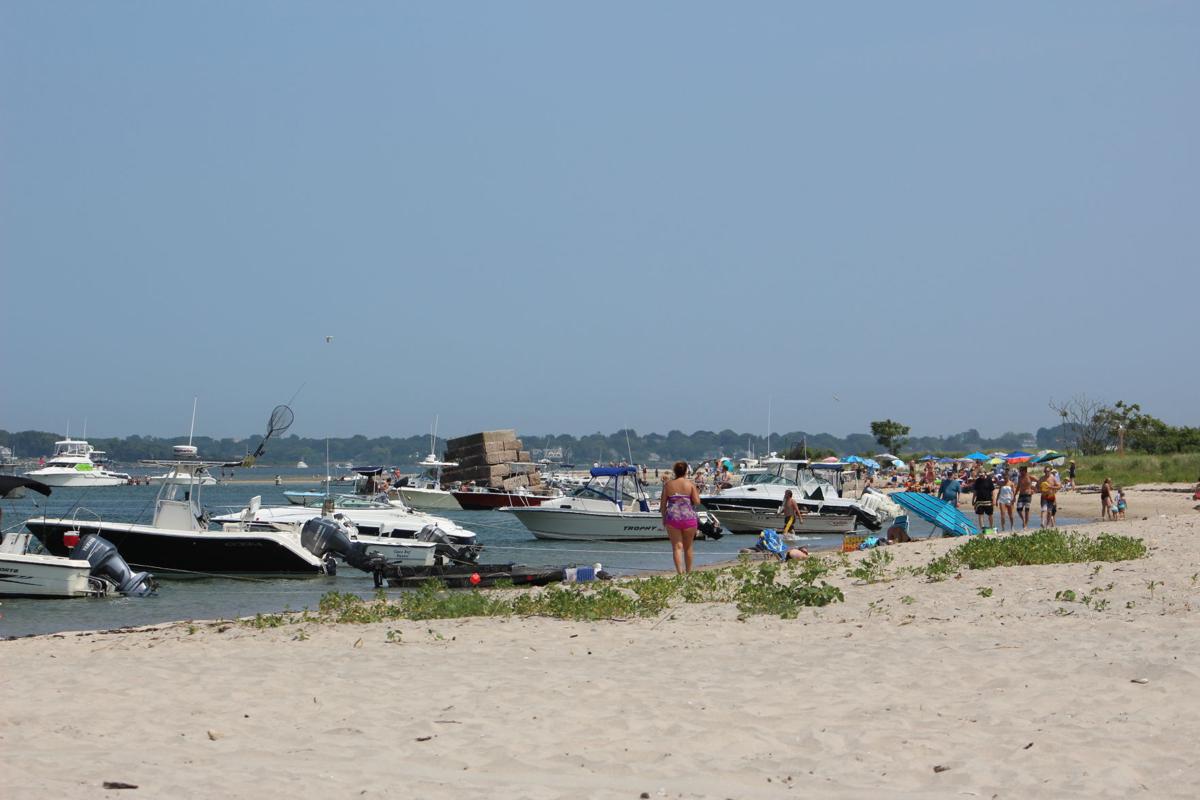 Sandy Point, in Little Narragansett Bay, has been a popular destination for boaters. Stonington police said they would enforce new no-wake restrictions there in an effort to protect swimmers and small watercraft, and to guard against collisions. Sun file photo. 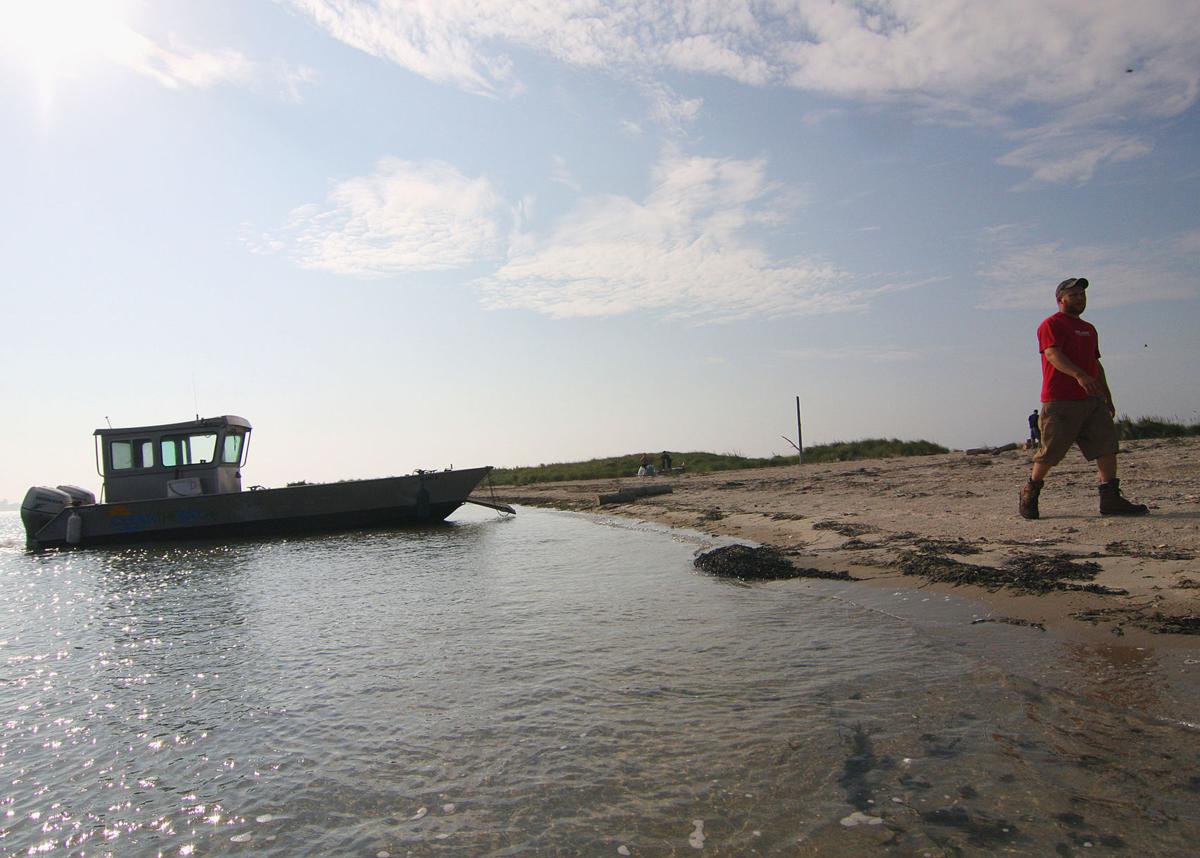 Joe Mariani from Clean The Bay walked across Sandy Point looking for pilings to remove in 2010. Sun file photo 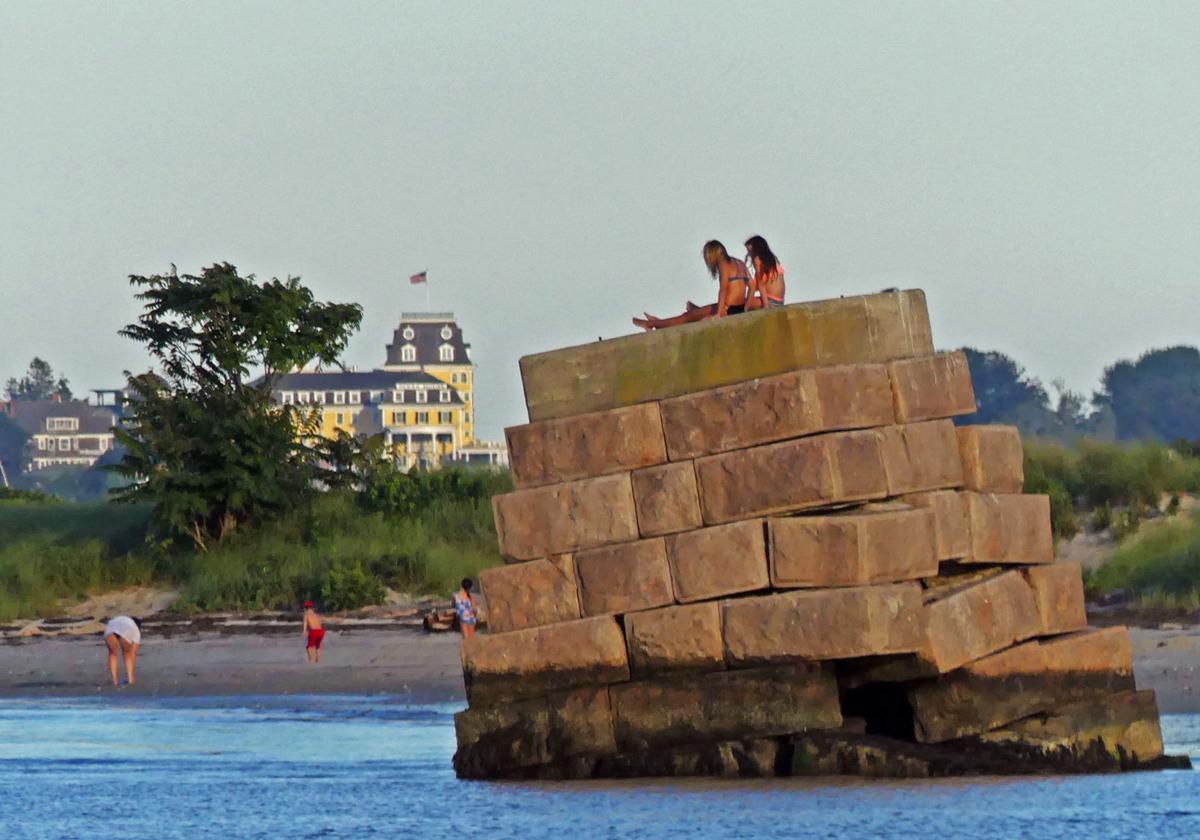 Girls perched atop the remains of a huge stone foundation at Sandy Point in 2017. Sun file photo 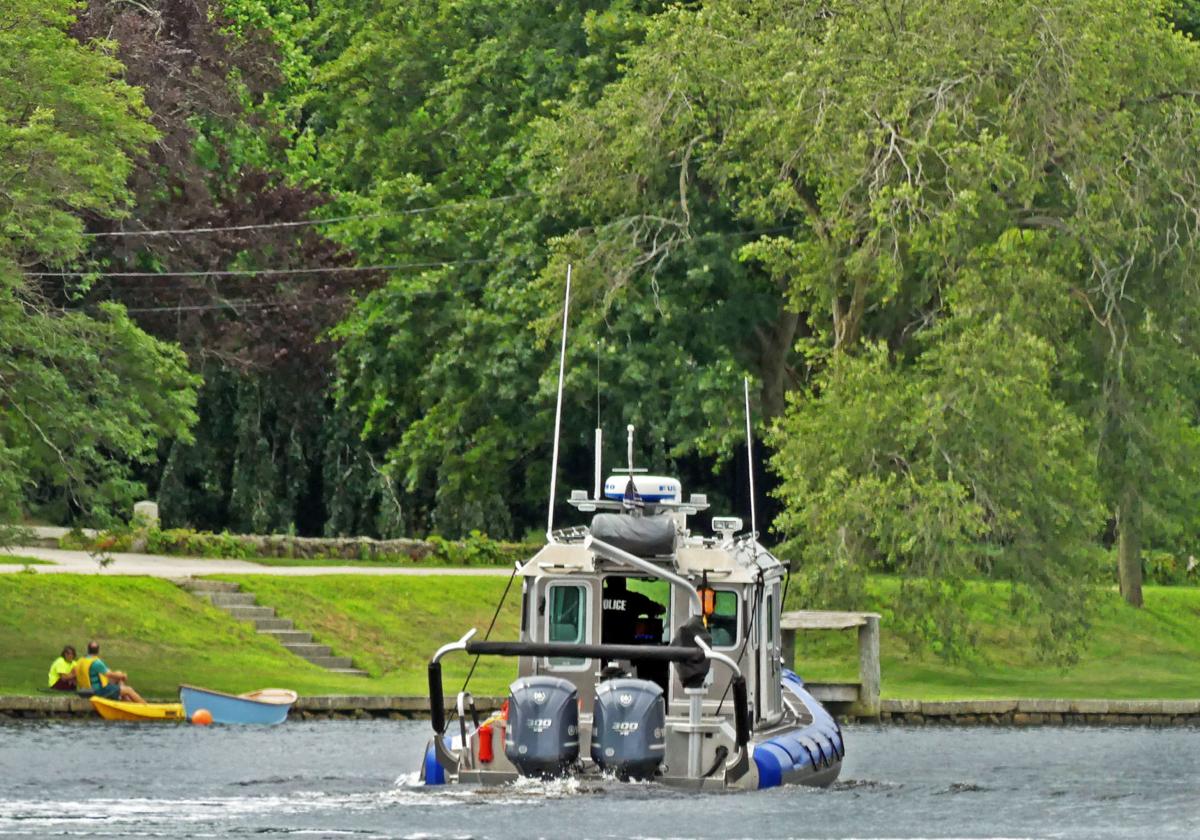 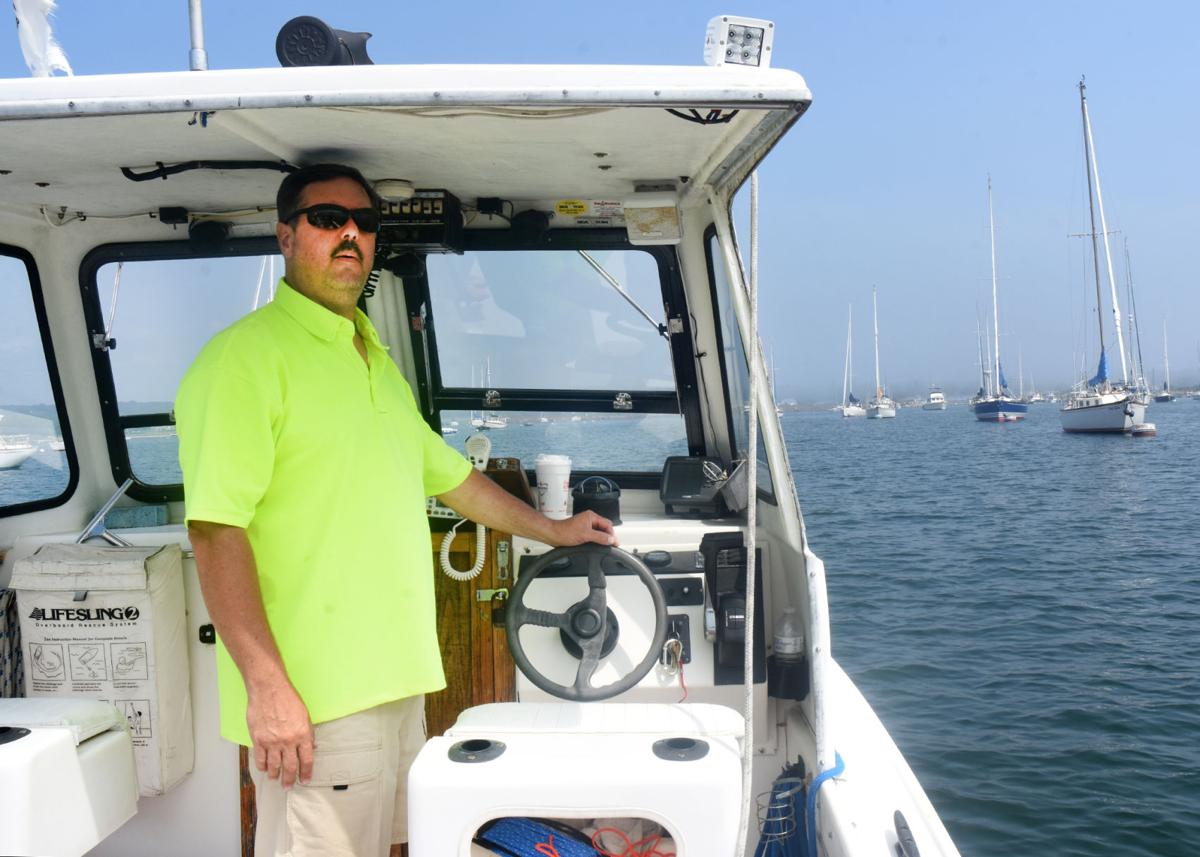 Wayne Crockford of the Westerly police, then a corporal, was patrolling the Pawcatuck River in this 2012 photo. He has since been promoted to lieutenant. Sun file photo

Sandy Point, in Little Narragansett Bay, has been a popular destination for boaters. Stonington police said they would enforce new no-wake restrictions there in an effort to protect swimmers and small watercraft, and to guard against collisions. Sun file photo.

Joe Mariani from Clean The Bay walked across Sandy Point looking for pilings to remove in 2010. Sun file photo

Girls perched atop the remains of a huge stone foundation at Sandy Point in 2017. Sun file photo

Police and harbormasters in shoreline towns have begun preparations for the influx of boaters expected in the coming weeks.

The Westerly and Stonington police departments have conducted seasonal maintenance on their boats and they are docked and ready. Charlestown Harbormaster Justin Vail said his team will slowly ramp up patrols through Memorial Day, with regular weekend and holiday enforcement being a top priority.

“Early in the season, we are focused on safety,” Vail said. “We are looking to make sure those who are on the water have everything in place, that kids are wearing (personal flotation devices) and seeing that boats are properly registered.”

Fire departments, including Dunn’s Corners, Watch Hill and Misquamicut, have been training for a wide variety of summer activities. In Stonington, several departments have volunteers trained in shoreline tactical response, including Pawcatuck, Old Mystic and Stonington Borough, while members of the Charlestown-Richmond Fire Department and Charlestown Ambulance Rescue Service are also trained in various marine responses.

Westerly Police Chief Shawn Lacey said officers would work to ensure that local boaters are being safe and maintaining proper and safe navigation practices, including adhering to no-wake zone and speed restrictions.

This year, Lacey said the town will also be implementing its interim harbor management plan. The plan, which was adopted by the Town Council in October with the consent of the state Coastal Resources Management Council, will require the town to register moorings and establish a waiting list for moorings as part of a list of duties for the 2019 season.

“It is our responsibility to make sure all moorings are properly registered and used within the regulations set in the plan,” Lacey said. “This will be a new wrinkle to our usual enforcement responsibilities.”

In Stonington, police Capt. Todd Olson said the department put its boat in the water on Wednesday and would start patrols soon, with some early season enforcement leading up to more regular patrols during the summer.

The department, which works with the Stonington Harbor Management Commission, will focus on safety, speed and DUI enforcement, and will monitor boating registrations. The town has seven officers who are licensed to operate the department’s vessel, and Olson said the department would create a plan that provides patrols during peak times such as weekends and holidays, while also giving the officers  an opportunity to enjoy time with their family and friends.

“Many of those licensed are officers with their own boats," Olson said. "They are dedicated and we have a healthy number of certified people, which allows us to maintain regular coverage.”

Olson said the officers would regularly enforce the new no-wake zone restrictions near Sandy Point. The area is a popular spot for locals and tourists alike, Olson said, and it was a priority expressed by members of the harbor commission when Lt. Bryan Schneider conferred with them earlier this year.

Olson said the goal of the new restrictions is to reduce turbulence in the high-traffic area to enhance safety for smaller crafts such as kayaks and canoes, as well as for swimmers, and to reduce boat speeds to help prevent collisions and other problems.

In similar fashion, Vail said he and Charlestown’s assistant harbormasters, Nathan McGillivary and Rick Soderberg, would focus on no-wake restrictions in 2019. The harbormasters serve under the supervision of the Charlestown Police Department and have done an excellent job of maintaining and enforcing the town’s harbor management plan, Police Chief Michael Paliotta said.

Vail noted that the town implemented a no-wake restriction last summer near the Pond Shore area of Ninigret Pond. “When it comes to wakes, they are a danger to the people that boats are passing by,” Vail said. “It may seem like an inconvenience to some boaters, but safety is a bigger concern.”

Vail said that safety would remain the top priority.

“If there’s one message I can stress, it's for the people using our ponds, and realize that both the ponds have many users,” he said. “We have everything from kayaks and canoes to power boats. Be courteous and safe when out on the pond.”

PHOTOS: The catch of the day at the Stonington Town Dock

Lobsters, sea scallops are moving out of southern New England

At the Library: Mouthwatering recipes to try at home