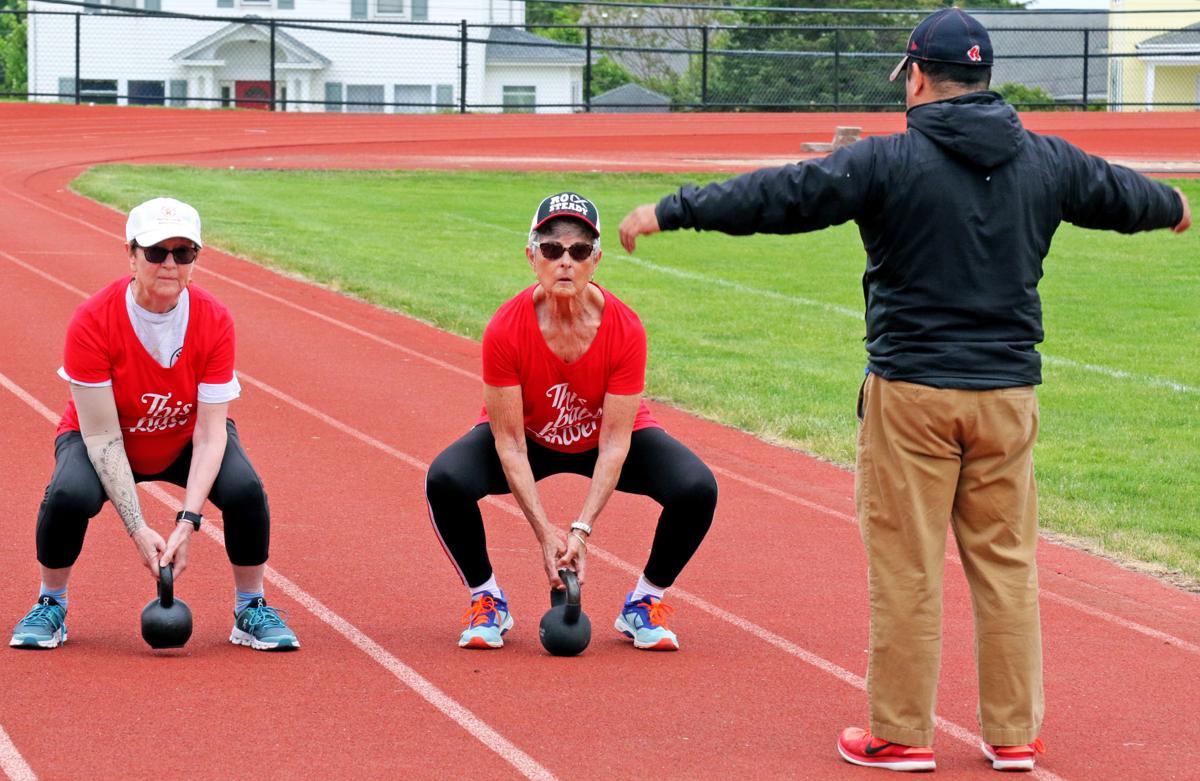 Senior athletes Kathryn Taylor, right, and Pat Grande watch their coach Geoff Visgilio, the director of Westerly's Rock Steady Boxing program, as they perform an exercise for maintaining proper posture on Tuesday, May 28, 2019, as they trained for the senior games in New Mexico. 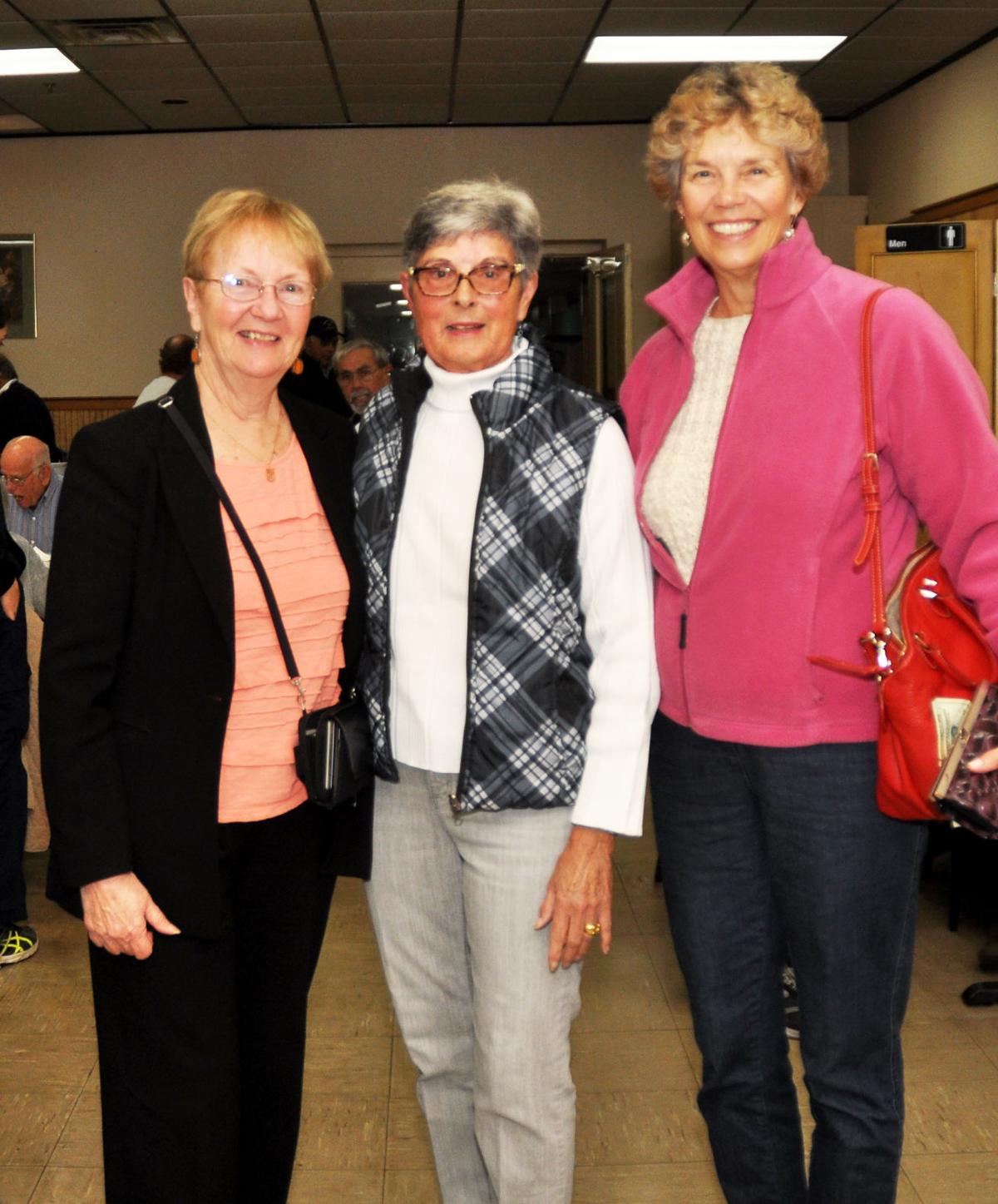 From left, Kathryn Taylor, Pat Grande and Lee Stepanishon at a pasta dinner to benefit the Jonnycake Center of Westerly in 2015.

Senior athletes Kathryn Taylor, right, and Pat Grande watch their coach Geoff Visgilio, the director of Westerly's Rock Steady Boxing program, as they perform an exercise for maintaining proper posture on Tuesday, May 28, 2019, as they trained for the senior games in New Mexico.

From left, Kathryn Taylor, Pat Grande and Lee Stepanishon at a pasta dinner to benefit the Jonnycake Center of Westerly in 2015.

WESTERLY — Patricia Grande, a longtime Westerly resident who welcomed thousands of people to this town as the gracious hostess of the former Grandview Bed and Breakfast on Shore Road — a business she owned and operated for more than 25 years — died Tuesday at the Westerly Hospital. She would have been 77 on June 4.

Pat died of natural causes following an operation related to Parkinson's Disease, according to her sister-in-law, Rev. Debra Haffner of Reston, Va.

"She was my big sister and she was a great person," said Grande's brother, Ralph Tartaglione, her only sibling, who is married to Haffner. "She had a big heart ... and she was kind and she was generous and she was forgiving."

"She was always there," added Tartaglione, who said he and his sister grew up in a large and loving Italian family in Hamden, Conn., that gathered regularly for celebrations and holidays. In later years, he said, those gatherings took place in Westerly at the Grandview, where their mother moved in 1999 to live with Pat.

Grande was the daughter of the late Iola Valentino Tartaglione and the late Ralph Tartaglione. She was a graduate of Hamden High School and Southern Connecticut University and had a master's degree in special education, her brother said. Pat moved to Westerly when her former husband, the late Carlo H. Grande II, an award-winning sportscaster who had a distinguished career in the broadcast industry, bought WERI radio. The Grandes mentored young people who would go on to illustrious careers in sports, people like Chris Berman, Ken Coleman, Bob Picozzi, Dave Jennings and Doris Burke. Grande was also a special education teacher in Groton.

A past president of the Ocean Community Chamber of Commerce, Pat was just the second female business owner elected as chair of the chamber board.

"Pat Grande will forever be remembered for her many contributions to the chamber of commerce" said chamber president Lisa Konicki. "All these many years later and she was still very much engaged in our activities."

Grande, said Konicki, was a regular guest at the chamber office, and "a community cheerleader in our efforts to support the small business community."

Just eight weeks ago, Konicki said, Grande arrived at the chamber office with a bouquet of daffodils that she gave to Konicki, along with "a beautiful, metal sculpture of a tern standing tall."

Konicki said the tern sculpture is "proudly displayed in my office," near a certain photograph.

"I keep a 20-year-old photo of Pat, Joan Rushlow and myself on the wall as inspiration," she said, "since both those ladies set an example of excellence and community service."

"Pat was a dynamic lady who put her heart and soul into this community through her volunteer work and was one of the most thoughtful people I have ever known," Konicki added. "She had the unique gift of making everyone feel appreciated, welcomed and like family. Whether they worked side by side with her on a volunteer project, or whether they were a guest staying at her charming B & B, everyone who came in contact with her recognized that she was a gem."

"Joan Rushlow, Angie Smith and now Pat Grande," mused Konicki about the recent deaths of three iconic local women. "What an incredible loss for the chamber family ... these amazing ladies helped lay the foundation for what this chamber is today ... I feel their support and am channeling their strength during these challenging times."

Grande earned a stellar reputation in Westerly over her years as a businesswoman and was known for her kindness, warmth and genuine hospitality. She was active in a number of organizations, including the Westerly Track Club and the Westerly Library and Wilcox Park, where she served as a trustee.

"It's a loss for the whole town," said Ellen Madison of Westerly, who ran the Woody Hill Bed and Breakfast for 41 years and enjoyed a friendship with Grande for most of those years. "Pat was so active civically and was such an excellent host."

"She'd entertain at the drop of a hat," added Madison who shared a love of the UConn Huskies women's basketball team with her friend. The two attended 10 of the team's Final Four championships together, Madison said.

"She also had an incredible attention to detail," said Madison."And she was kind ... very, very kind."

Grande was also an accomplished athlete who believed in the power of exercise to improve health who ran, played tennis and just last year competed in the Power Walking category at the National Senior Games in New Mexico.

Grande regularly walked three miles a day, six days a week, before she discovered boxing, which she then added to her fitness regime.

Geoff Visgilio of Westerly, Grande's boxing coach, who also teaches a class for people with Parkinson's at his gym, Rock Steady, said Grande was "the heart and soul of our group."

"Though we will miss her terribly," he said in an email, "I can tell you for sure that she is infused in every single one of us. She was one of the most amazing women I've ever met in my life."

In a 2019 interview with The Sun just before she headed to Albuquerque to compete, Grande said she had a simple philosophy; "Be the best we can be for as long as we can."

Tartaglione said a memorial service will be held at a later date.

We will all miss you Pat. You have been so generous to so many over the years. Andrea, our children, & I have been so fortunate to have you in our lives. Rest In Peace. Thank you for your friendship. We love you.

Mystic Aquarium to auction off chance to name 3 beluga whales