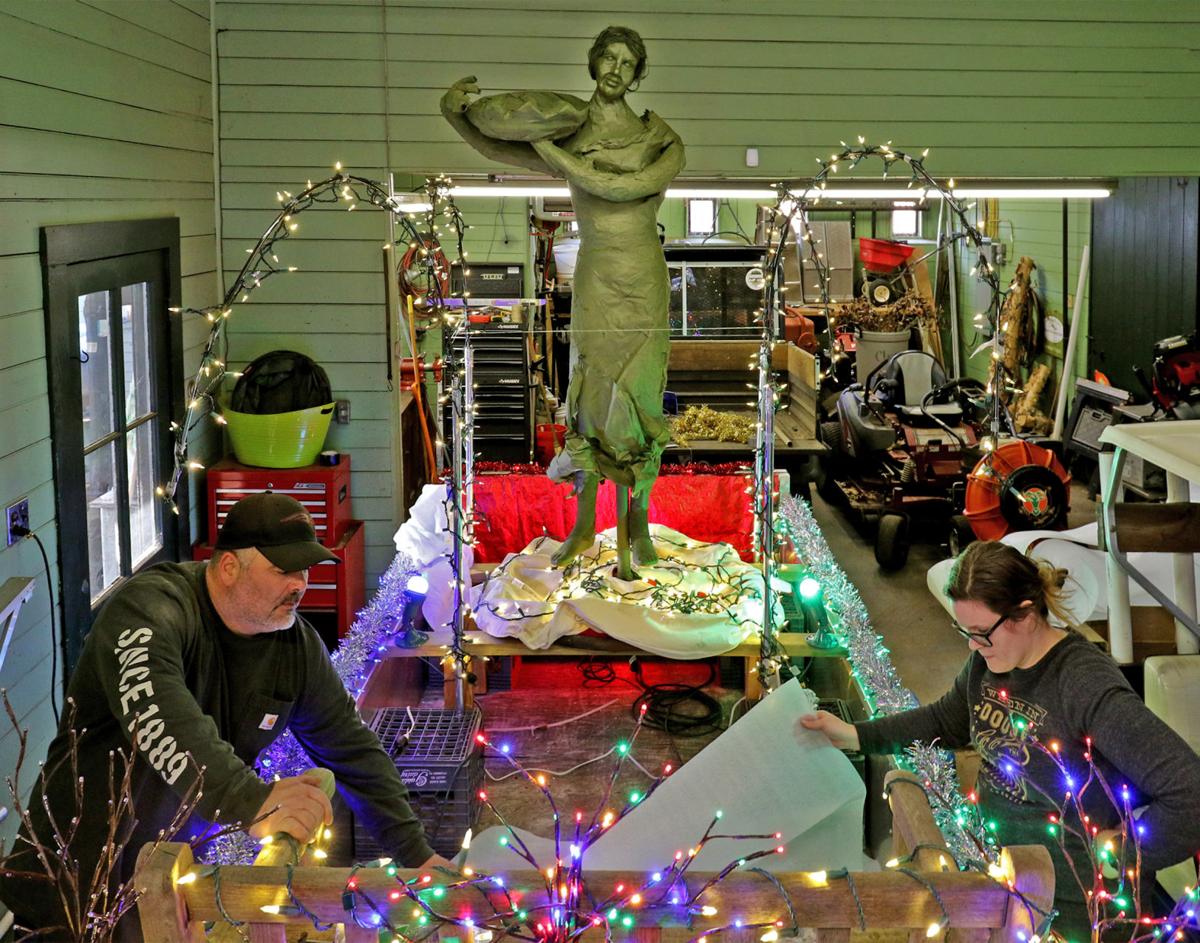 Wilcox Park head groundskeeper Paul Panciera and Westerly Library program coordinator Bethany Kearsch worked Thursday on a float, depicting the park's fountain statue, that will be part of the Westerly Holiday Light Parade. The parade will step off at 6 p.m. on Sunday. Harold Hanka, The Westerly Sun 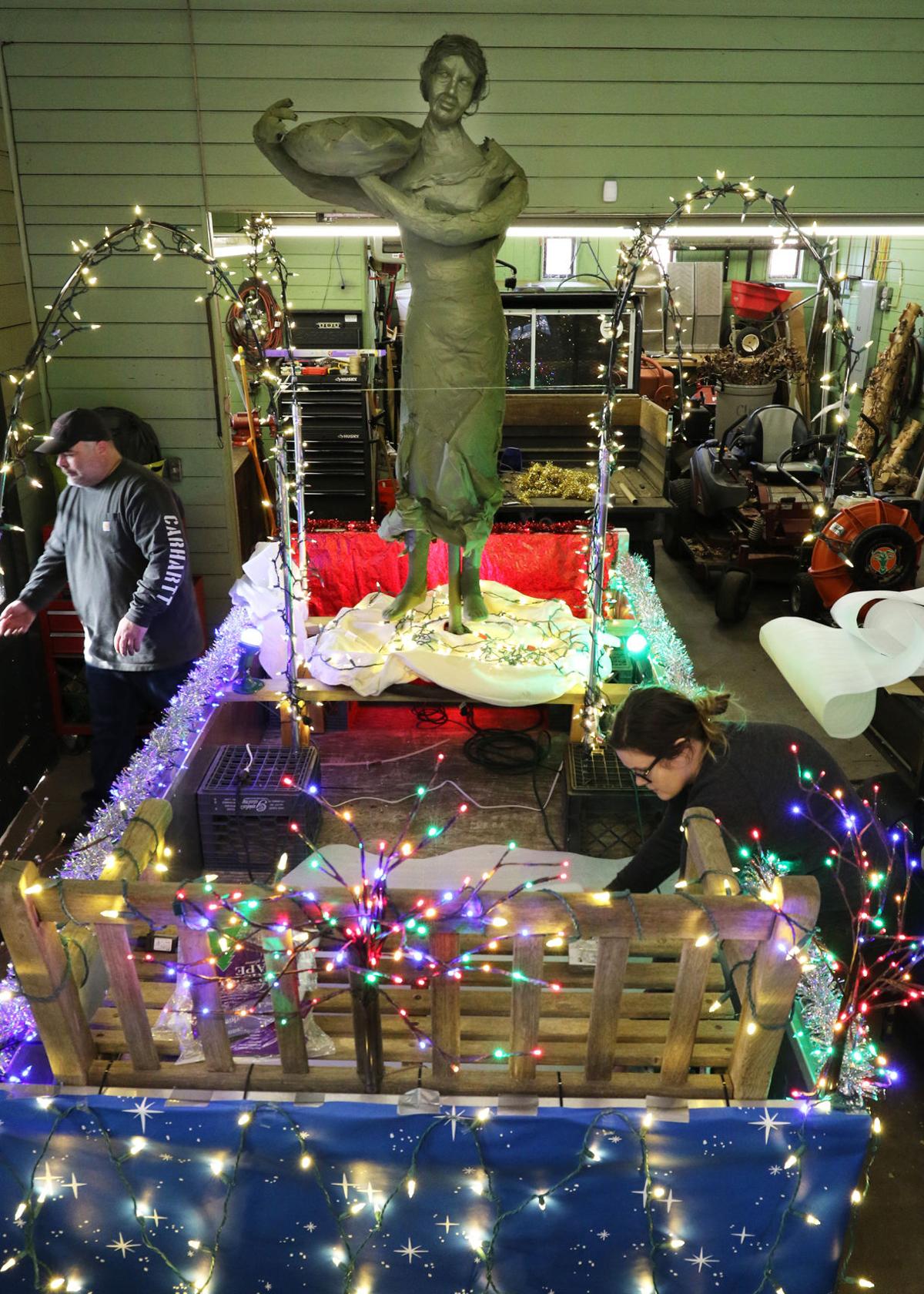 Wilcox Park head groundskeeper Paul Panciera and Westerly Library program coordinator Bethany Kearsch worked Thursday on a float, depicting the park's fountain statue, that will be part of the Westerly Holiday Light Parade. The parade will step off at 6 p.m. on Sunday. Harold Hanka, The Westerly Sun

WESTERLY — The yearlong celebration of the town's 350th anniversary will come to a bright conclusion Sunday with a light parade featuring 60 entries.

Floats made by individuals, community organizations and businesses will glitter, blink and bedazzle. Some floats will have a history theme, others will reflect the holiday season, and some will be just plain whimsical.

"I'm delighted with the number of participants. It exceeded our expectations. We're hoping for good weather to finish off what has been a perfect year," said Lisa Konicki, Ocean Community Chamber of Commerce president. The chamber's foundation has played a central role working with the Westerly 350th Anniversary Committee on the slate of events that kicked off with a community bell ringing on Jan. 1 and included two black-tie galas and an old-time fair in summer.

The Westerly Library and Wilcox Park float includes a papier-mâché likeness of the park's fountain statue. Dr. Rebecca J. Woodward, a local dentist, and her team fashioned a flashing smile with glistening teeth that is sure to bring a few smiles along the parade route.

The parade will step off at 6 p.m. from the Jonnycake Center of Westerly on Industrial Drive, turn onto Canal and High streets, and then proceed down Main Street to the state boat launch near McQuade's Marketplace.

Strobes N' More, a local business that makes emergency light arrays for the police and other emergency departments, developed a "Grinch Paddy Wagon Sleigh Float." The Chorus of Westerly's float will make new use of a 30-foot dragon prop that was used in the organization's Twelfth Night performance.

Lou Misto, the owner of Strobes N' More, said he started thinking about float ideas after Konicki told him about the parade during a Business After Hours event that the firm hosted in August. "We do all the police lights so this was right up our alley," he said.

On Thursday Misto was putting the finishing touches on the float with some of his office staff. The paddy wagon sleigh is made out of plywood and includes "cell bars" and lots of lights.

"When Lisa told me about it, I knew we had to do it. I think it's going to be a lot of fun for people," Misto said.

The parade, Konicki said, is intended "to make memories. I hope everyone has a magical time. We want people to look back and say 'remember when they did all those events for the 350th. I was there.'"  Konicki thanked the dozens of people who are helping to present the parade, including the Westerly Police Department, which waived the fees it usually charges for event police services.

If the parade's Facebook page is any indication, the parade could draw a big crowd. As of Friday, more than 4,000 people said they planned to attend.

Driver charged with DUI after crash on Westerly's Main Street