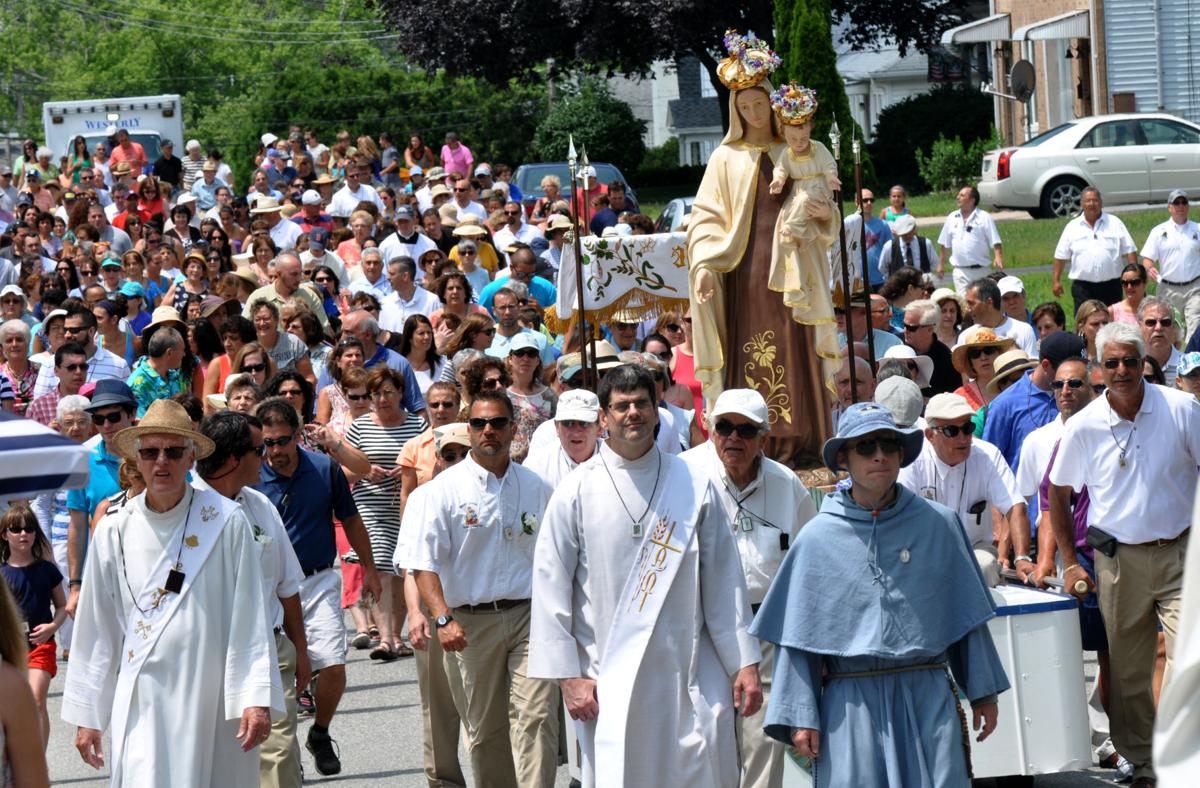 Members of the Feast of Our Lady of Mount Carmel Committee push the statue of the Virgin Mary along Narragansett Avenue during the annual procession in 2016. Because of the COVID-19 pandemic, committee members will hold a socially distanced version of the weeklong festivities this year. 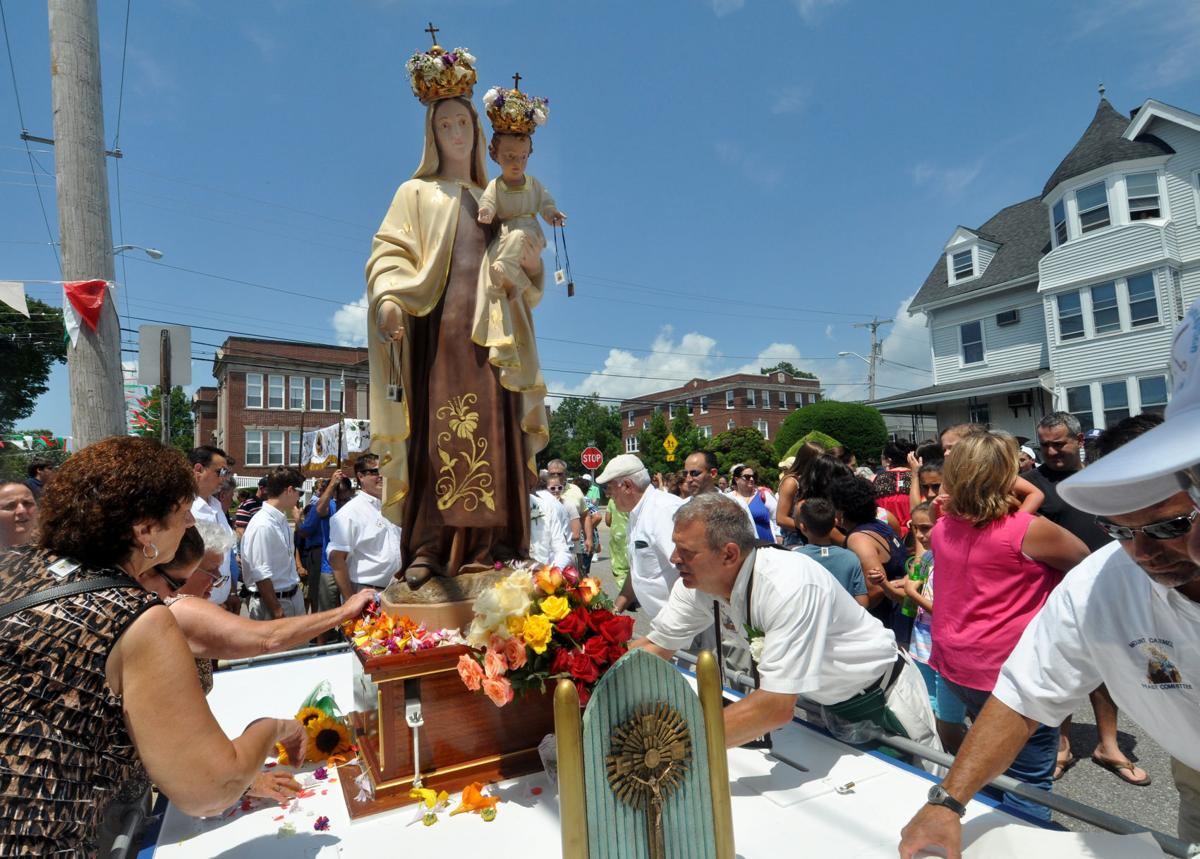 Followers leave flowers on the platform of the statue.

Members of the Feast of Our Lady of Mount Carmel Committee push the statue of the Virgin Mary along Narragansett Avenue during the annual procession in 2016. Because of the COVID-19 pandemic, committee members will hold a socially distanced version of the weeklong festivities this year.

Followers leave flowers on the platform of the statue.

WESTERLY — A 92-year-old local tradition that commemorates the Virgin Mary and a miracle will be vastly different this year.

Due to the COVID-19 pandemic, organizers of the Feast Day of Our Lady of Mount Carmel — a beloved annual event that typically attracts hundreds of faithful followers who march together through the streets of Westerly behind an an enormous statue of the Blessed Mother — are asking people to stand safely on the sidelines this year, and to wear masks and remain socially distanced.

Only the members of the Feast Day of Our Lady of Mount Carmel Feast Committee, members of the clergy, the Maria Assunta Society and the Knights of Columbus will be allowed to take part in the procession on Sunday, July 19, according to Mike Breslin, the president of the feast day committee.

"We'll continue with the traditional Wednesday, Thursday and Friday Triduum Masses," Breslin added, "but we will follow all rules established by the state and the town."

Social distancing and face covering will be required at all times, the number of people allowed into each Mass at Immaculate Conception Church will be monitored and all state and Diocesan guidelines will be adhered to, he said.

Friday night's procession and reception have been canceled, Breslin said, as has the Sunday night celebration that typically featured a band concert and a fireworks display at Craig Field.

Breslin said committee members will carry the statue of the Blessed Mother out of the church at 1 p.m. on Sunday "and bring her right to the trailer."

There will be no foot procession, Breslin stressed, and no stopping along the route for people to pay their respects.

"We are asking that everyone respect the rules and view her from their yards," he added.

At the end of the procession, at around 2:30 p.m, the statue will come back to the church parking lot and people will be allowed to drive in from Narragansett Avenue, pass by the statue, and drive out to Newton Avenue in order to pay their respects.

No one will be allowed to walk up to the statue or to be in the area without being in a car.

"No one can touch the statue," he said.

At 3:30 p.m., the statue will be moved back inside the church for a traditional benediction.

"I feel bad ... and we're all sorry for the inconvenience," Breslin said earlier this week as he discussed the protocols in place for the three-day festival. "We had very few options  ... mostly we want everyone to be safe."

"I know there are so many ladies who like to leave flower petals on the statue as sign of respect," he added, "but we just can't allow that this year."

Breslin said the committee has been meeting regularly — always seated 6 feet apart and wearing masks — to discuss how best to handle the celebration, which includes the procession, large family picnics, an Italian festival at Immaculate Conception, a candlelight procession and the three days of Masses known as the "Triduum."

One option was to cancel everything, Breslin said, but that option was quickly taken off the table.

The feast day, committee members concluded, was too important to cancel, especially during the dark days of a pandemic.

"We wanted to keep the tradition alive," Breslin said, "but we knew we had to be safe."

A matter of tradition

"We've never canceled," said Antonio "Juney" Trebisacci Jr., of Westerly, a longtime member of the feast committee. "One year we had to postpone because of rain, but we've never canceled in all the 92 years. Nothing like this has ever happened before."

Trebisacci, whose father, the late Antonio Trebiscacci Sr., was a founding member of the committee, said many people in Westerly and from Westerly "have a great devotion to our Blessed Mother."

"Many families who came here from Italy brought the tradition with them," he said.

It's a tradition, he said, that commemorates an 1892 miracle that took place in the farming village of Toreannugita, Italy, where farmers "prayed openly and fervently" for rain during a 19-month-long drought.

Their prayers were finally answered on July 16, he said, the feast day of Our Lady of Mount Carmel, when the rains came pouring down.

During World War II, Trebisacci said, many mothers would walk the route barefoot to ask for special protections for their children who were fighting in the war.

Today, he said, in the time of COVID-19, "we are lucky to have Our Blessed Mother to pray to."

On Sunday, July 19, the traditional 7 a.m. Mass for all the deceased members of the Our Lady of Mount Carmel Feast Committee will be held and celebrated by Capoverdi.

On Friday, Breslin said the committee was still working on the "safest way" to hand out the brown scapulars, a religious artifact that is part of the annual festivities. During other Mount Carmel processions, committee members would toss the scapulars to the crowds gathered along the parade route. Those who processed alongside the statue always wore the scapulars around their necks as a blessing.

Scapulars, according to the Vatican's Congregation for Divine Worship, are "external signs of the filial relationship established between the Blessed Virgin Mary, Mother and Queen of Mount Carmel, and the faithful who entrust themselves totally to her protection."

"If anyone wants a scapular, they can call me," Trebisacci said. "I'm always happy to help."

Breslin said the committee members are considering placing wicker donation baskets in front of the statue for a limited time before it's returned to the church on Sunday.

"We appreciate the continued support for this traditional, very beautiful adoration of Our Lady of Mount Carmel," he said.