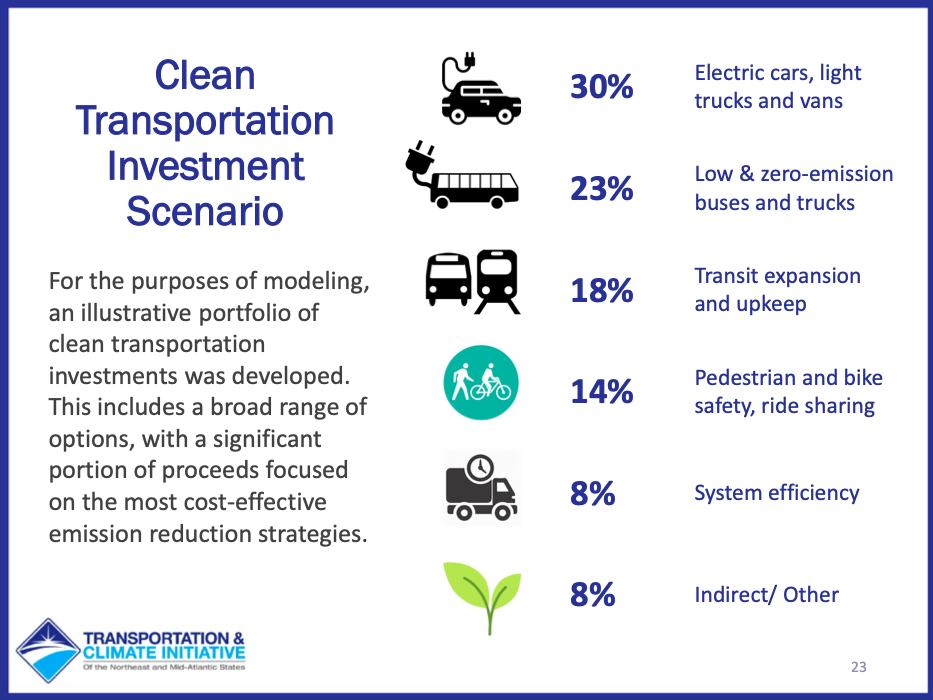 The above are possible spending objectives of proceeds from the proposed cap-and-invest program. (Georgetown Climate Center) 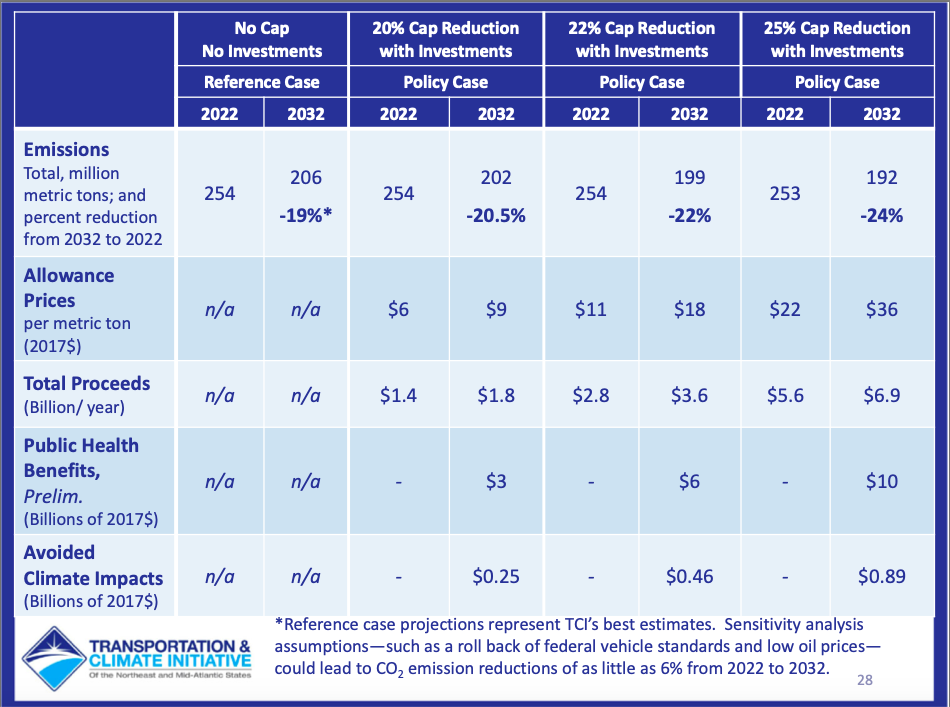 The partner states have three scenarios for reducing emissions from the transportation sector. (Georgetown Climate Center)

The above are possible spending objectives of proceeds from the proposed cap-and-invest program. (Georgetown Climate Center)

The partner states have three scenarios for reducing emissions from the transportation sector. (Georgetown Climate Center)

The latest regional plan to reduce greenhouse-gas emissions was launched with little fanfare in Rhode Island and opposition from fossil-fuel interests. There was even criticism from environmentalists.

Vermont Republican Gov. Phil Scott said he is reviewing the proposal. Connecticut Gov. Ned Lamont, a Democrat, has also been silent on the draft memorandum of understanding.

Since the memorandum was released, Massachusetts Gov. Charlie Baker, a Republican, has been the only governor to speak publicly in favor of the initiative. Baker is invested in the 12-state partnership, having already promised that half of the proceeds will support an $18 billion transportation bond. Massachusetts Energy Secretary Kathleen Theoharides serves as chair of the TCI leadership team.

The Rhode Island Department of Environmental Management, the agency overseeing state TCI administration, expected a press release from Gov. Gina Raimondo endorsing the proposal but none was issued. The governor’s spokesperson, Jennifer Bogdan, said Raimondo supports a regional approach to addressing the climate crisis but didn’t offer the governor’s stance on the cap-and-invest proposal.

“Last week launched a public conversation around these proposals, and the governor looks forward to hearing from Rhode Islanders as TCI starts work to find a collaborative path towards economic growth, reduced carbon emissions, cleaner air, and an improved transportation system,” Bogdan said.

Last December, nine states and the District of Columbia agreed to design a regional plan for cutting transportation-sector emissions. Twelve states have participated in the planning, and it’s up to each to enact the latest proposal. But having unified involvement is necessary to prevent nonparticipating states from obtaining an economic advantage with lower fuel prices. Most states, including Rhode Island, will require legislative approval to adopt the emissions-cutting proposal. Baker has said he holds the authority for Massachusetts to participate.

The cap-and-fee approach is modeled on the nine-state Regional Greenhouse Gas Initiative, but instead of power plants, fuel distributors would be required to buy allowances through an auction for exceeding emission limits, which decline annually. The initiative’s auction proceeds — an estimated $5 billion to $7 billion annually — would be returned proportionally to participating states and invested in improvements in cleaner transportation, such as infrastructure for electric cars and buses and expanding bus and rail service.

The cost at the pump will depend on which scenario each state selects. A 20 percent target reduction could increase the price of a gallon of gas by 5 cents. A 25 percent cap-reduction scenario could increase prices an estimated 17 cents.

Opponents mounted a negative campaign before the latest proposal was even announced. The day it was released, 18 groups issued a letter stating the oft-repeated argument that the plan unfairly burdens low-income and rural populations.

Prompted by talk radio and near daily anti-TCI stories in the Boston Herald, negative remarks are flowing into the initiative's public comment portal.

Some critics believe TCI’s goals are too timid, noting that under the “business-as-usual” scenario, emissions are already expected to fall 19 percent because of improving fuel-efficiency standards and electric vehicle sales.

“My concern is that this initiative will create the perception that something is being done about climate change, when this is utterly, utterly, inadequate,” said professor Timmons Roberts of Brown University’s Climate and Development Lab.

Roberts referred to a recent Brown University study showing that Rhode Island could reduce transportation-sector emissions by nearly 100 percent by 2030 — a model he said other states can follow.

The Sierra Club has called for a 45 percent reduction goal, one that aligns more closely with Rhode Island's emission-reduction targets. The environmental group Climate Action RI called the initiative's proposal “outrageously weak,” noting that scientific consensus calls for a 50 percent emissions reduction by 2030 — a reduction of 7.6 percent annually.

Other environmental groups, such as the Acadia Center, the Conservation Law Foundation, and the Environmental League of Massachusetts insist that TCI is worth adopting.

“With the disappointing international climate talks last week and the lack of federal leadership, it is all the more important that states make urgent progress on reducing climate-warming pollution,” said Nancy Goodman, the league’s vice president for policy.

Public comment on the TCI is open until Feb. 28.

A final memorandum of understanding is expected to be released this spring. Each state will then decide legislatively or otherwise whether to sign the final MOU and participate in the regional program. Once implemented, the initial phase of the program would run from 2022 to 2032.

PHOTOS: Wind kicks up spray along the seawall

R.I. officials urge caution in disposal of ashes amid mild and drier winter

Letter: Claims in Latham’s letters way off base

PHOTOS: Snagged at the dam